Shinoa Hiiragi is the female protagonist of Owari No Seraph. And is known for her sarcasm and tongue in cheek perosnality.

But aside from her playful personality, she does have some serious moments and there’s more purpose to her character.

This is shown through her quotes, dialogue, and moments in Owari No Seraph. 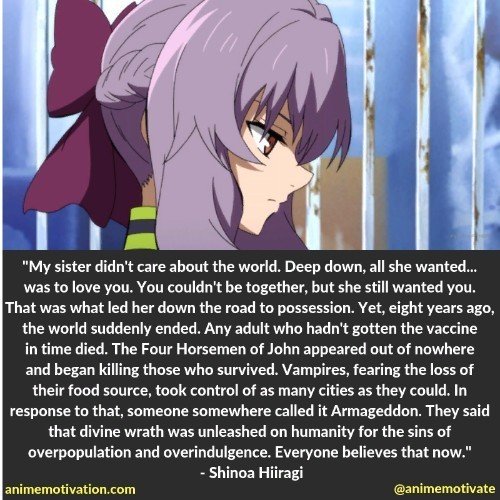 “My sister didn’t care about the world. Deep down, all she wanted… was to love you. You couldn’t be together, but she still wanted you. That was what led her down the road to possession. Yet, eight years ago, the world suddenly ended. Any who hadn’t gotten the vaccine in time died. The Four Horsemen of John appeared out of nowhere and began killing those who survived. Vampires, fearing the loss of their food source, took control of as many cities as they could. In response to that, someone somewhere called it Armageddon. They said that divine wrath was unleashed on humanity for the sins of overpopulation and overindulgence. Everyone believes that now.” – Shinoa Hiiragi 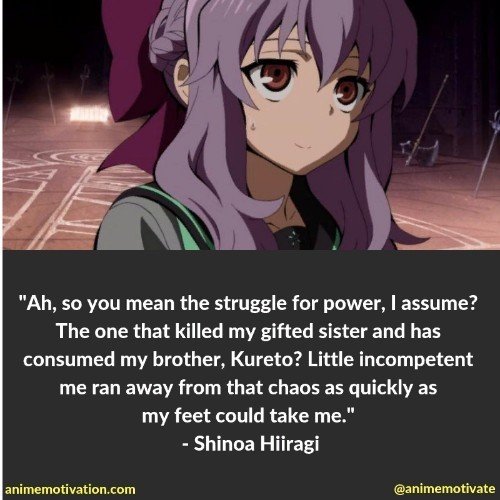 “Ah, so you mean the struggle for power, I assume? The one that killed my gifted sister and has consumed my brother, Kureto? Little incompetent me ran away from that chaos as quickly as my feet could take me.” – Shinoa Hiiragi 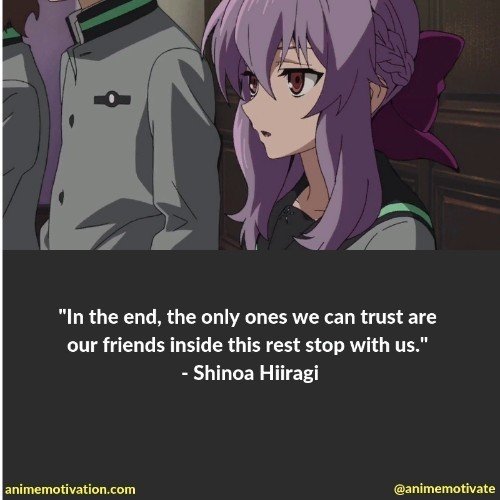 “In the end, the only ones we can trust are our friends inside this rest stop with us.” – Shinoa Hiiragi 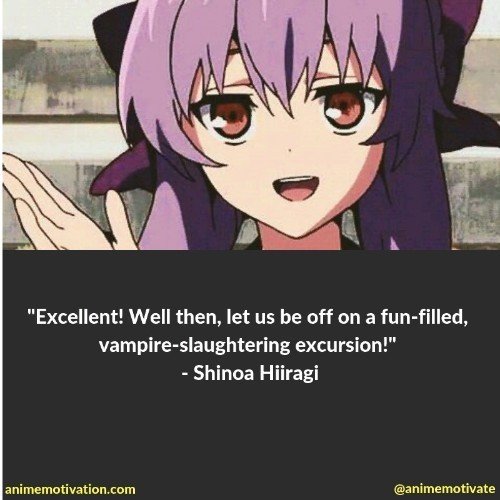 “Excellent! Well then, let us be off on a fun-filled, vampire-slaughtering excursion!” – Shinoa Hiiragi 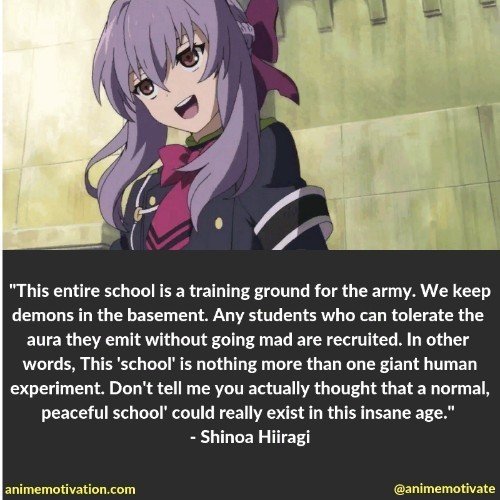 “This entire school is a training ground for the army. We keep demons in the basement. Any students who can tolerate the aura they emit without going mad are recruited. In other words, This ‘school’ is nothing more than one giant human experiment. Don’t tell me you actually thought that a ‘normal, peaceful school’ could really exist in this insane age.” – Shinoa Hiiragi 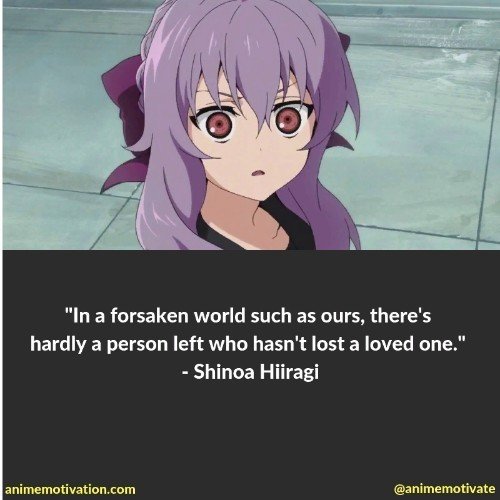 “In a forsaken world such as ours, there’s hardly a person left who hasn’t lost a loved one.” – Shinoa Hiiragi 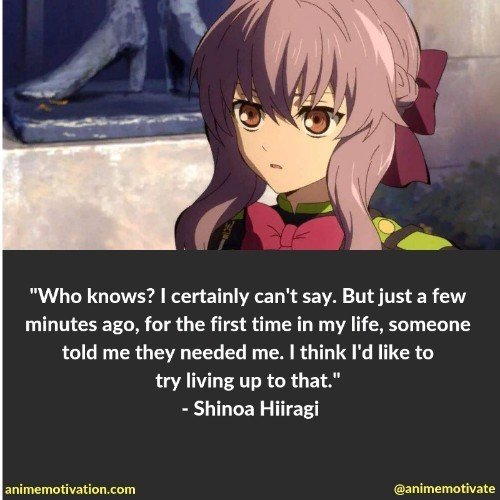 “Who knows? I certainly can’t say. But just a few minutes ago, for the first time in my life, someone told me they needed me. I think I’d like to try living up to that.” – Shinoa Hiiragi 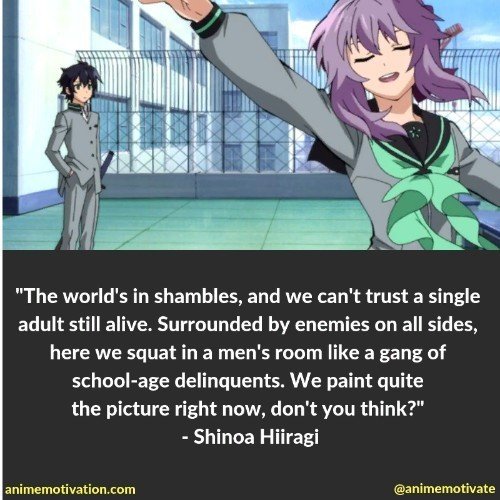 “The world’s in shambles, and we can’t trust a single still alive. Surrounded by enemies on all sides, here we squat in a men’s room like a gang of school-age delinquents. We paint quite the picture right now, don’t you think?” – Shinoa Hiiragi 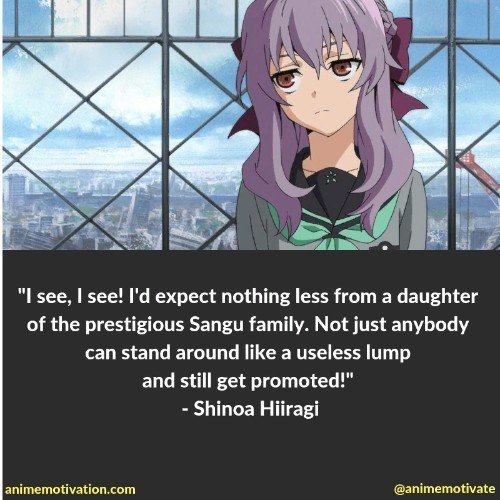 “I see, I see! I’d expect nothing less from a daughter of the prestigious Sangu family. Not just anybody can stand around like a useless lump and still get promoted!” – Shinoa Hiiragi 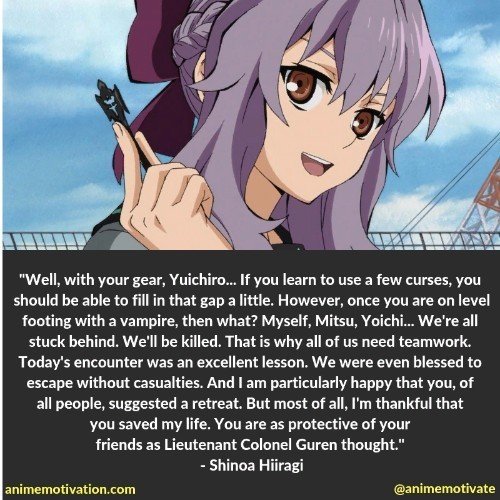 “Well, with your gear, Yuichiro… If you learn to use a few curses, you should be able to fill in that gap a little. However, once you are on level footing with a vampire, then what? Myself, Mitsu, Yoichi… We’re all stuck behind. We’ll be killed. That is why all of us need teamwork. Today’s encounter was an excellent lesson. We were even blessed to escape without casualties. And I am particularly happy that you, of all people, suggested a retreat. But most of all, I’m thankful that you saved my life. You are as protective of your friends as Lieutenant Colonel Guren thought.” – Shinoa Hiiragi 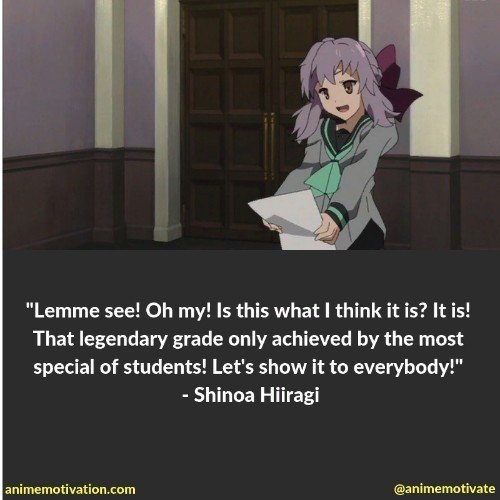 “Lemme see! Oh my! Is this what I think it is? It is! That legendary grade only achieved by the most special of students! Let’s show it to everybody!” – Shinoa Hiiragi 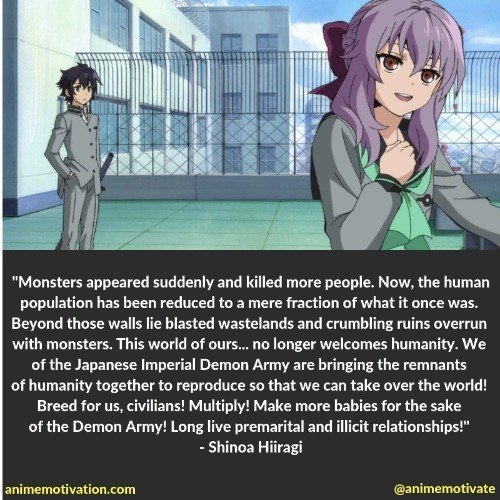 “Monsters appeared suddenly and killed more people. Now, the human population has been reduced to a mere fraction of what it once was. Beyond those walls lie blasted wastelands and crumbling ruins overrun with monsters. This world of ours… no longer welcomes humanity. We of the Japanese Imperial Demon Army are bringing the remnants of humanity together to reproduce so that we can take over the world! Breed for us, civilians! Multiply! Make more babies for the sake of the Demon Army! Long live premarital and illicit relationships!” – Shinoa Hiiragi 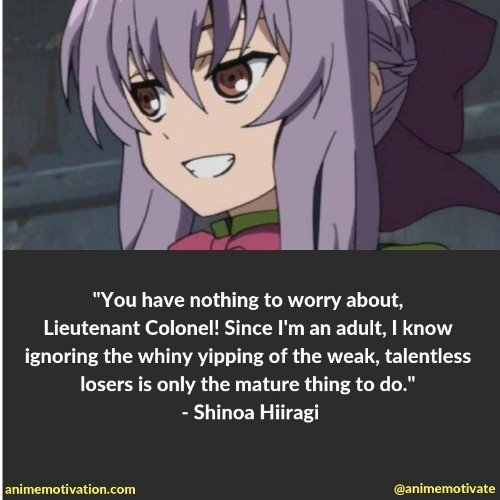 “You have nothing to worry about, Lieutenant Colonel! Since I’m an , I know ignoring the whiny yipping of the weak, talentless losers is only the thing to do.” – Shinoa Hiiragi 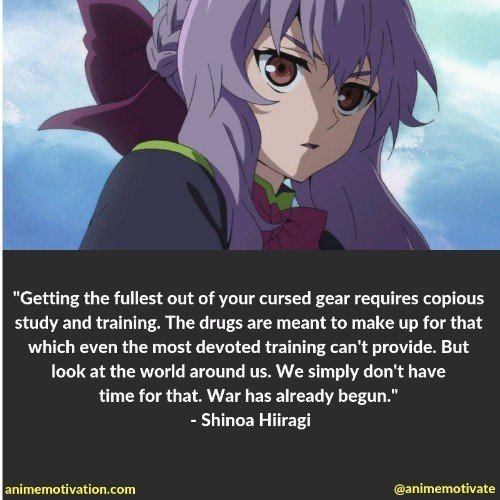 “Getting the fullest out of your cursed gear requires copious study and training. The drugs are meant to make up for that which even the most devoted training can’t provide. But look at the world around us. We simply don’t have time for that. War has already begun.” – Shinoa Hiiragi 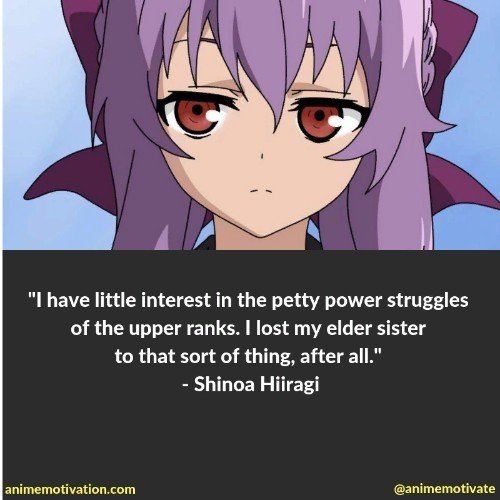 “I have little interest in the petty power struggles of the upper ranks. I lost my elder sister to that sort of thing, after all.” – Shinoa Hiiragi

11 Homura Akemi Quotes That Are Deep

14 Lucy Heartfilia Quotes That Will Pull On Your Heart Strings