Donquixote Doflamingo is one of the many villains who show up in the series. He’s a powerful member of The Seven Warlords Of The Sea, with a bounty on his head worth 340,000,000 million.

The quotes and lines in this post will highlight Donquixote’s:

And in some cases, relevant life lessons that can be applied to life.

Here’s a list of his best quotes from OP! 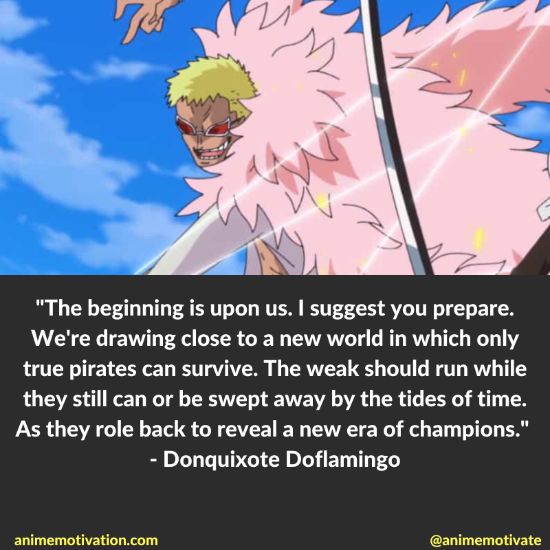 “The beginning is upon us. I suggest you prepare. We’re close to a new world in which only true pirates can survive. The weak should run while they still can or be swept away by the tides of time. As they role back to reveal a new era of champions.” – Donquixote Doflamingo 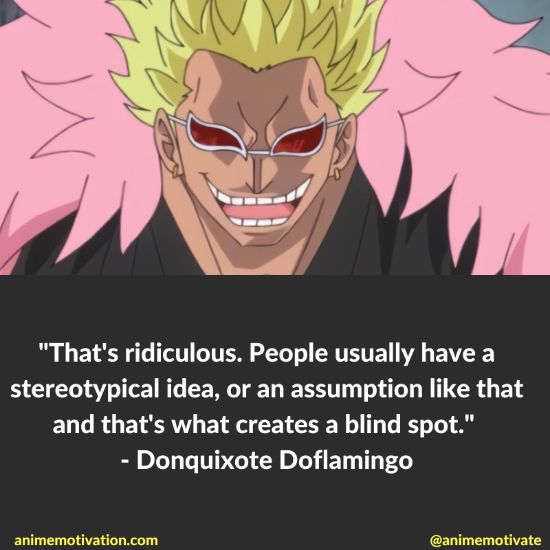 “That’s ridiculous. People usually have a stereotypical idea, or an assumption like that and that’s what creates a blind spot.” – Donquixote Doflamingo 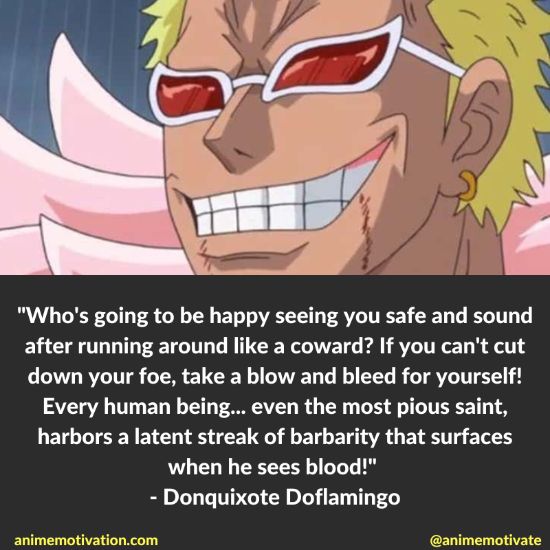 “Who’s going to be happy seeing you safe and sound after running around like a coward? If you can’t cut down your foe, take a blow and bleed for yourself! Every human being… even the most pious saint, harbors a latent streak of barbarity that surfaces when he sees blood!” – Donquixote Doflamingo 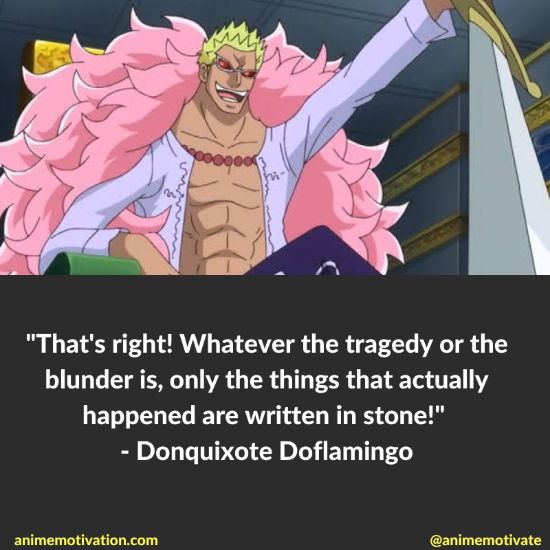 “That’s right! Whatever the tragedy or the blunder is, only the things that actually happened are written in stone!” – Donquixote Doflamingo 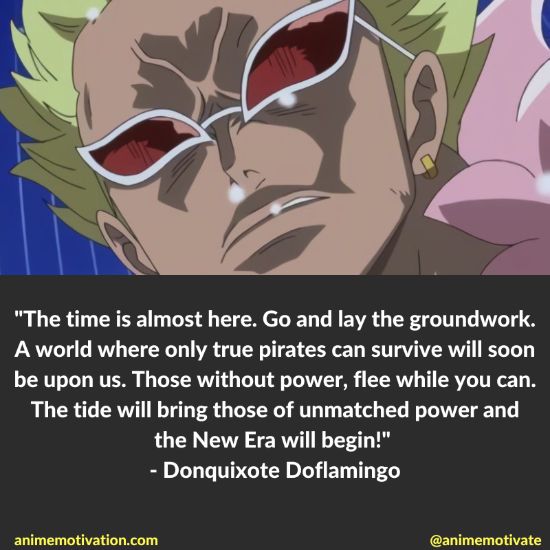 “The time is almost here. Go and lay the groundwork. A world where only true pirates can survive will soon be upon us. Those without power, flee while you can. The tide will bring those of unmatched power and the New Era will begin!” – Donquixote Doflamingo 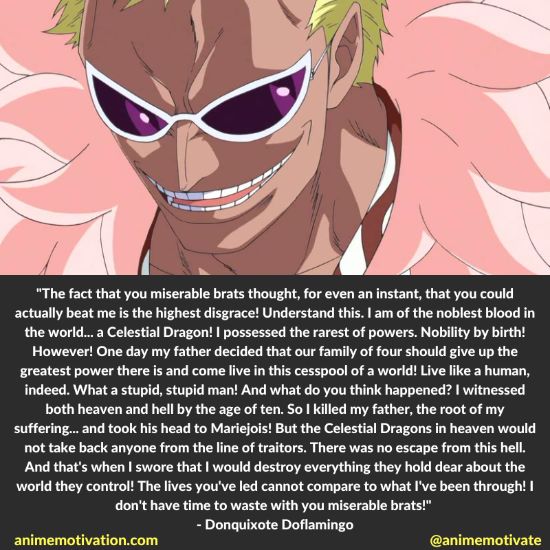 “The fact that you miserable brats thought, for even an instant, that you could actually beat me is the highest disgrace! Understand this. I am of the noblest blood in the world… a Celestial Dragon! I possessed the rarest of powers. Nobility by birth! However! One day my father decided that our family of four should give up the greatest power there is and come live in this cesspool of a world! Live like a human, indeed. What a stupid, stupid man! And what do you think happened? I witnessed both heaven and hell by the age of ten. So I killed my father, the root of my suffering… and took his head to Mariejois! But the Celestial Dragons in heaven would not take back anyone from the line of traitors. There was no escape from this hell. And that’s when I swore that I would destroy everything they hold dear about the world they control! The lives you’ve led cannot compare to what I’ve been through! I don’t have time to waste with you miserable brats!” – Donquixote Doflamingo 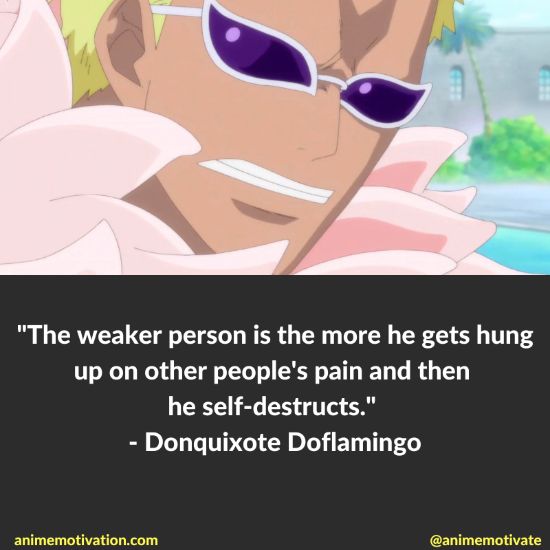 “The weaker person is the more he gets hung up on other people’s pain and then he self-destructs.” – Donquixote Doflamingo 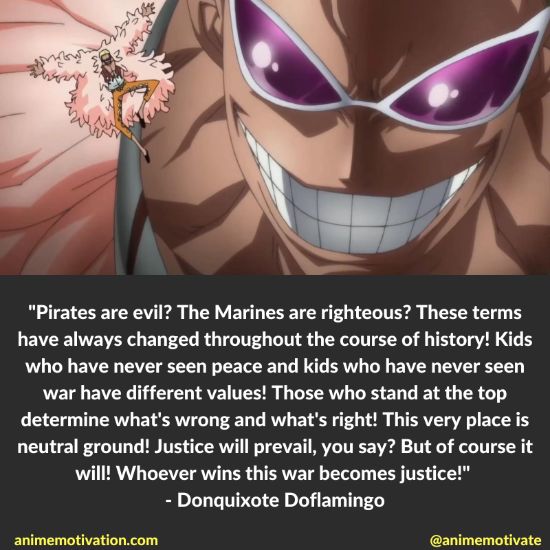 “Pirates are evil? The Marines are righteous? These terms have always changed throughout the course of history! Kids who have never seen peace and kids who have never seen war have different values! Those who stand at the top determine what’s wrong and what’s right! This very place is neutral ground! Justice will prevail, you say? But of course it will! Whoever wins this war becomes justice!” – Donquixote Doflamingo 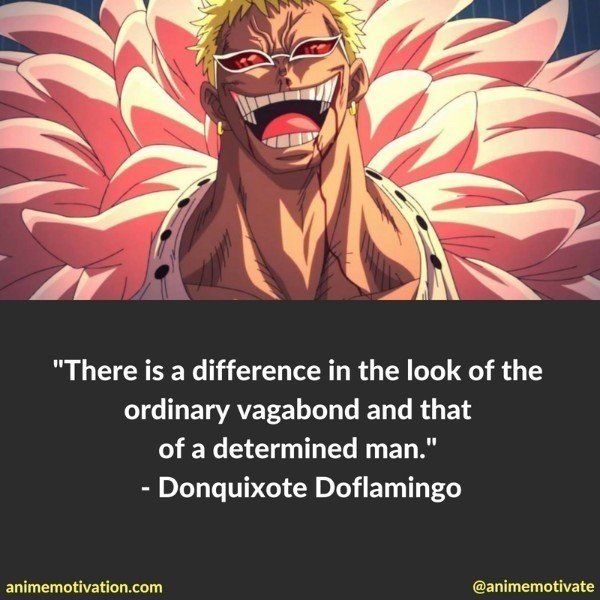 “There is a difference in the look of the ordinary vagabond and that of a determined man.” – Donquixote Doflamingo 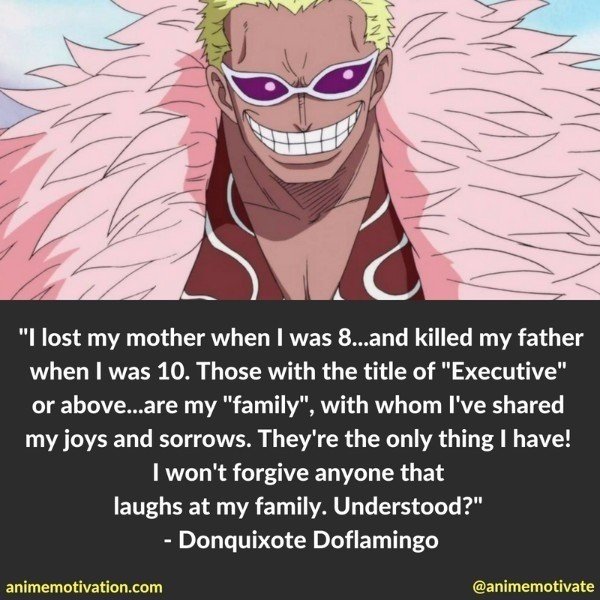 “I lost my mother when I was 8…and killed my father when I was 10. Those with the title of “Executive” or above…are my “family”, with whom I’ve shared my joys and sorrows. They’re the only thing I have! I won’t forgive anyone that laughs at my family. Understood?” – Donquixote Doflamingo