But like both series – there’s a deeper meaning that carries you through the story. This is what gives birth to the great quotes with life lessons we can all learn from.

Here are the best worth mentioning… 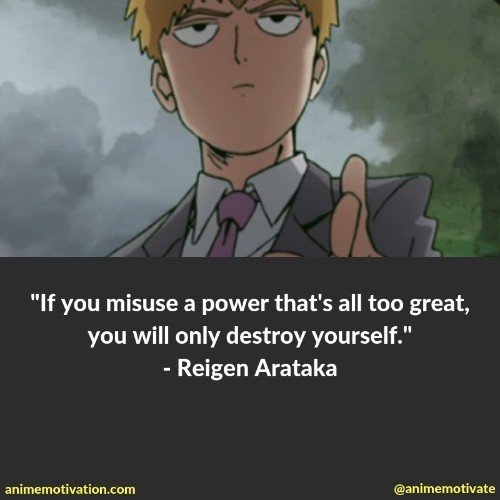 “If you misuse a power that’s all too great, you will only destroy yourself.” – Reigen Arataka 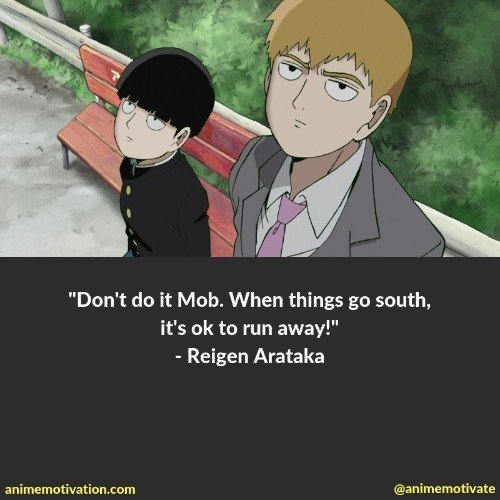 “Don’t do it Mob. When things go south, it’s ok to run away!” – Reigen Arataka 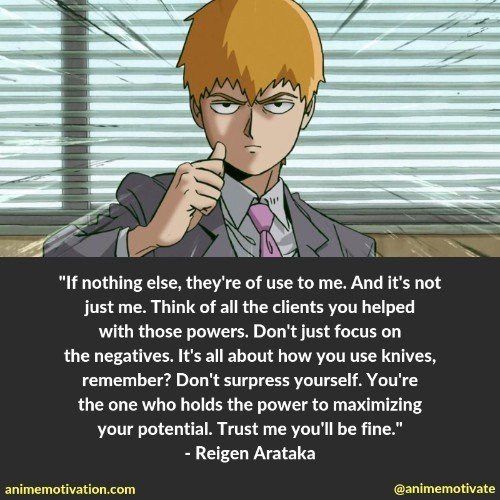 “If nothing else, they’re of use to me. And it’s not just me. Think of all the clients you helped with those powers. Don’t just focus no the negatives. It’s all about how you use knives, remember? Don’t surpress yourself. You’re the one who holds the power to maximizing your potential. Trust me you’ll be fine.” – Reigen Arataka 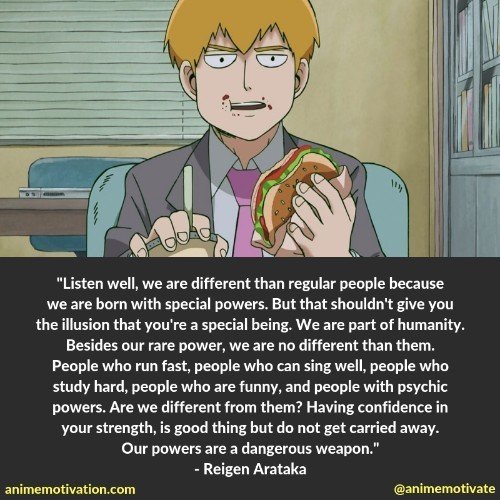 “Listen well, we are different than regular people because we are born with special powers. But that shouldn’t give you the illusion that you’re a special being. We are part of humanity. Besides our rare power, we are no different than them. People who run fast, people who can sing well, people who study hard, people who are funny, and people with psychic powers. Are we different from them? Having confidence in your strength, is good thing but do not get carried away. Our powers are a dangerous weapon.” – Reigen Arataka 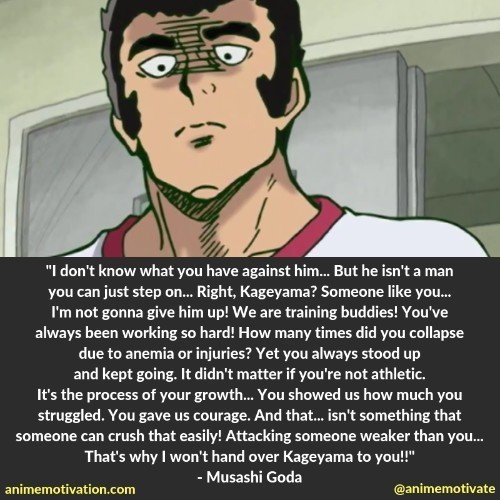 “I don’t know what you have against him… But he isn’t a man you can just step on… Right, Kageyama? Someone like you… I’m not gonna give him up! We are training buddies! You’ve always been working so hard! How many times did you collapse due to anemia or injuries? Yet you always stood up and kept going. It didn’t matter if you’re not athletic. It’s the process of your growth… You showed us how much you struggled. You gave us courage. And that… isn’t something that someone can crush that easily! Attacking someone weaker than you… That’s why I won’t hand over Kageyama to you!!” – Musashi Goda 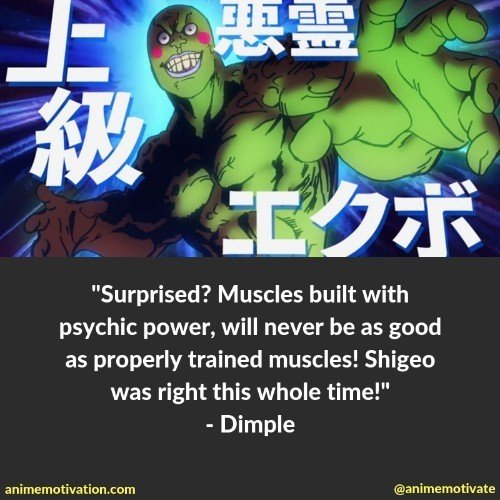 “Surprised? Muscles built with psychic power, will never be as good as properly trained muscles! Shigeo was right this whole time!” – Dimple 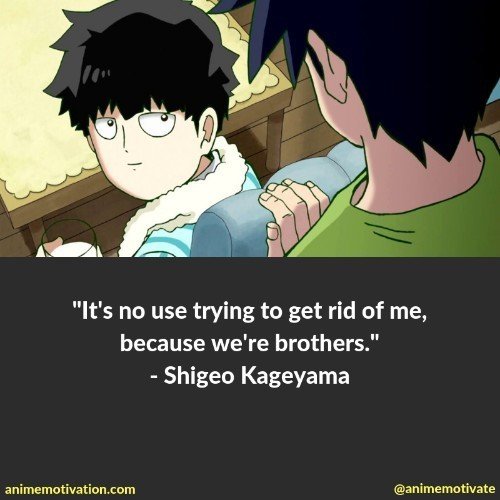 “It’s no use trying to get rid of me, because we’re brothers.” – Shigeo Kageyama 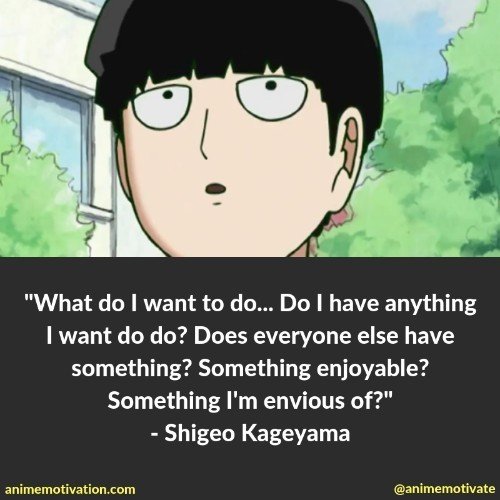 “What do I want to do… Do I have anything I want do do? Does everyone else have something? Something enjoyable? Something I’m envious of?” – Shigeo Kageyama 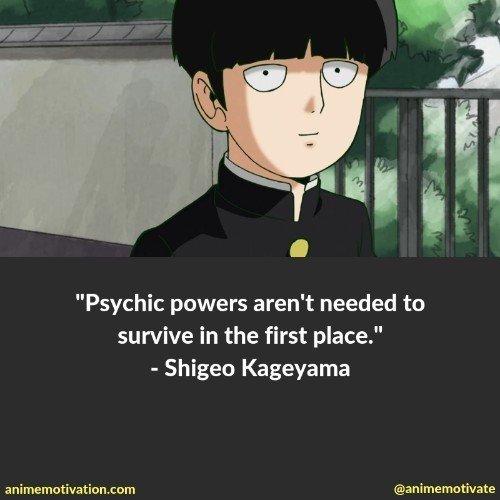 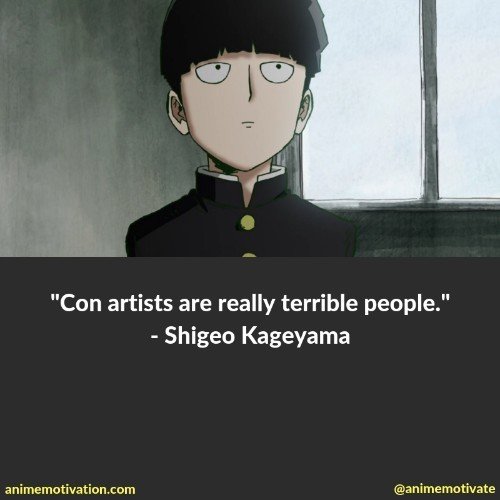 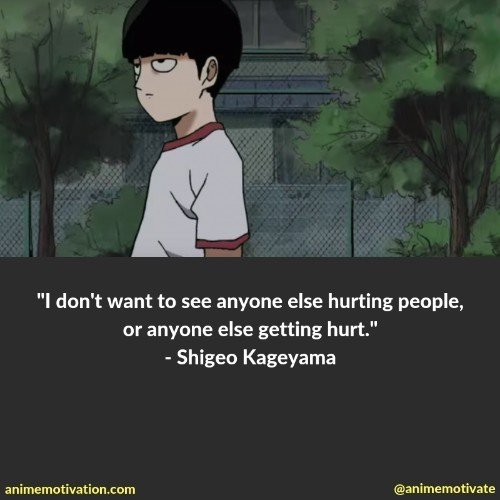 “I don’t want to see anyone else hurting people, or anyone else getting hurt.” – Shigeo Kageyama 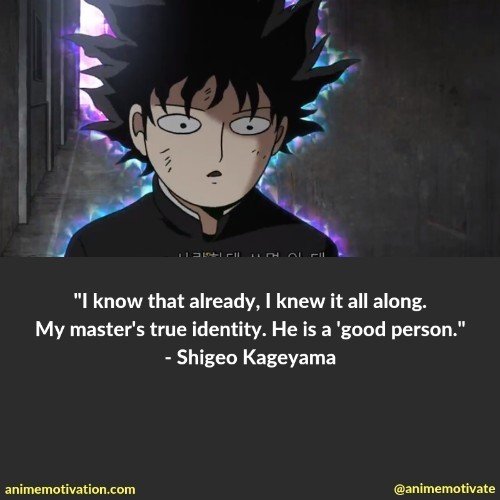 “I know that already, I knew it all along. My master’s true identity. He is a ‘good person.” – Shigeo Kageyama 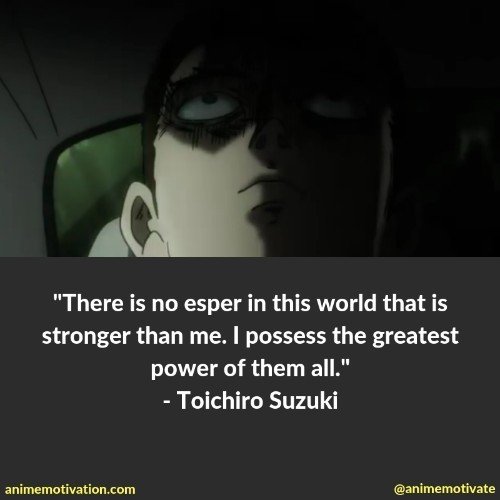 “There is no esper in this world that is stronger than me. I possess the greatest power of them all.” – Toichiro Suzuki 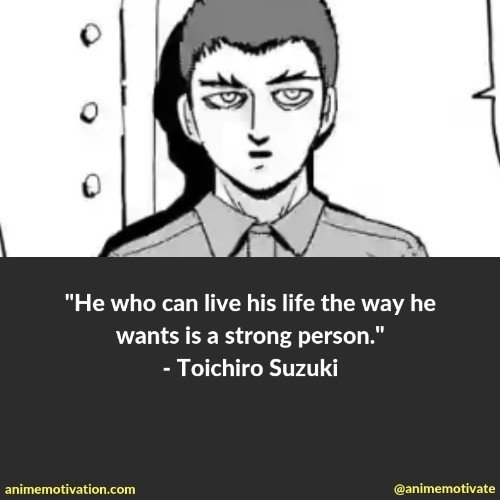 “He who can live his life the way he wants is a strong person.” – Toichiro Suzuki 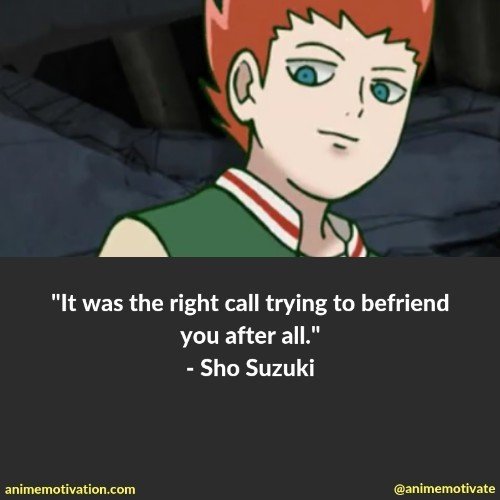 “It was the right call trying to befriend you after all.” – Sho Suzuki 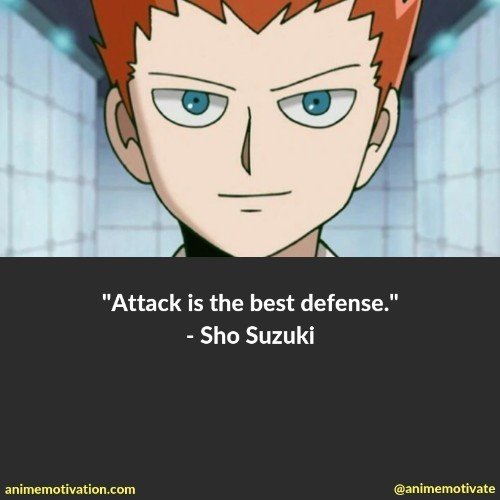 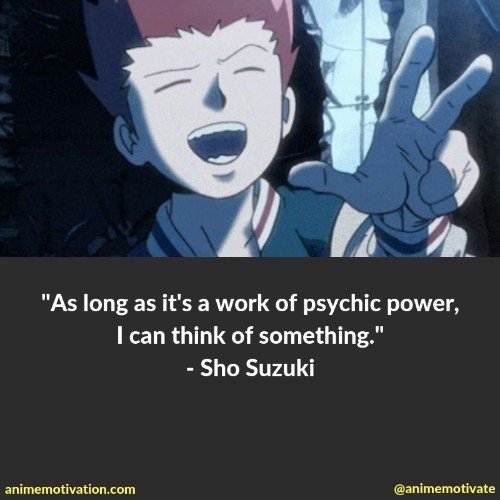 “As long as it’s a work of psychic power, I can think of something.” – Sho Suzuki 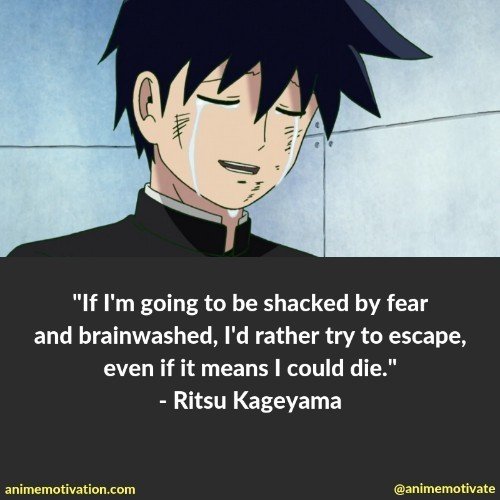 “If I’m going to be shacked by fear and brainwashed, I’d rather try to escape, even if it means I could die.” – Ritsu Kageyama 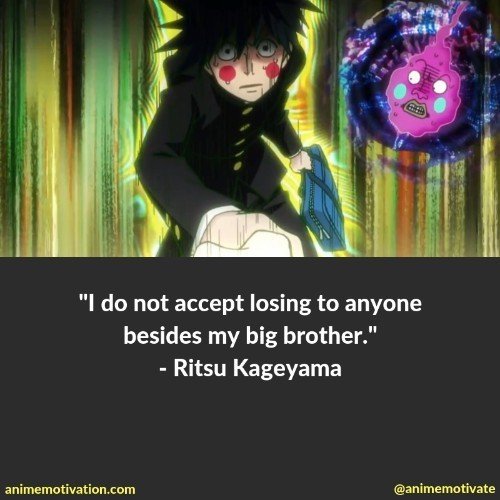 “I do not accept losing to anyone besides my big brother.” – Ritsu Kageyama 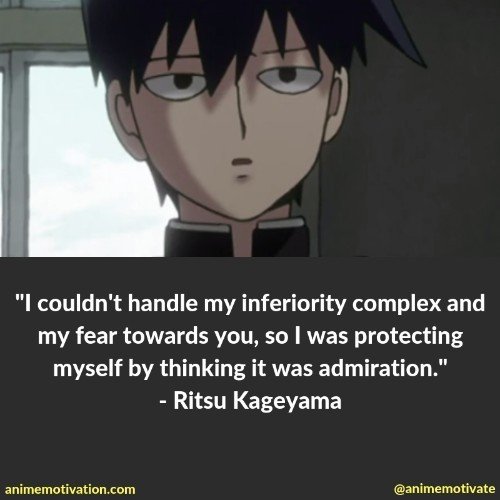 “I couldn’t handle my inferiority complex and my fear towards you, so I was protecting myself by thinking it was admiration.” – Ritsu Kageyama 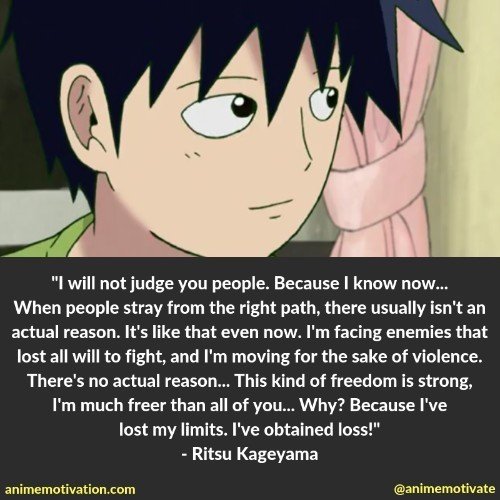 “I will not judge you people. Because I know now… When people stray from the right path, there usually isn’t an actual reason. It’s like that even now. I’m facing enemies that lost all will to fight, and I’m moving for the sake of violence. There’s no actual reason… This kind of freedom is strong, I’m much freer than all of you… Why? Because I’ve lost my limits. I’ve obtained loss!” – Ritsu Kageyama 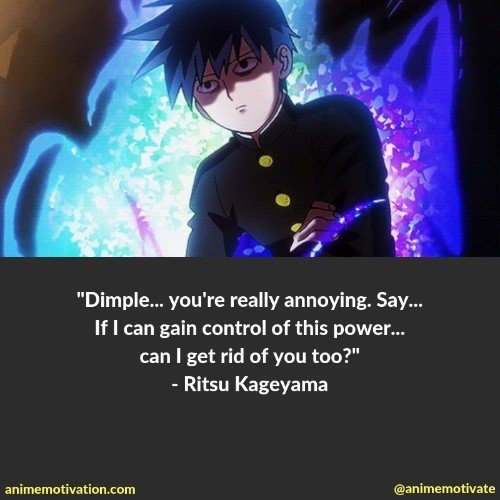 “Dimple… you’re really annoying. Say… If I can gain control of this power… can I get rid of you too?” – Ritsu Kageyama 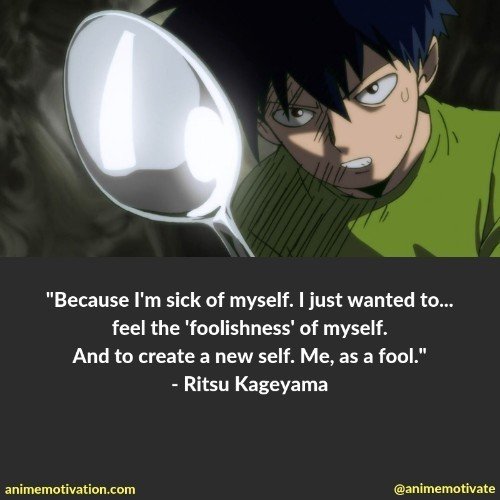 “Because I’m sick of myself. I just wanted to… feel the ‘foolishness’ of myself. And to create a new self. Me, as a fool.” – Ritsu Kageyama

“You cannot solve all problems with your kindness. Sometimes, you need to be strict to others.” – Keiji Mogami

15 Of The Mightiest One Punch Man Anime Quotes

Reading through these with my husband (Katsuya Serizawa). So true Ritsu. Go off kid, become the best fool you can be.