Toradora is a classic romance, slice of life series by J.C Staff. Stacked with quotes from all the main and support characters.

Here are some of the best to make you laugh, relate, and bring back the best moments had to offer.

The Best Quotes Worth Sharing: 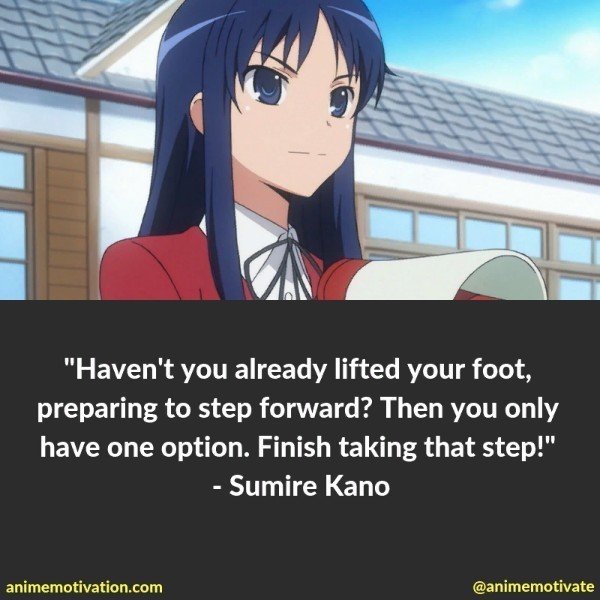 “Haven’t you already lifted your foot, preparing to step forward? Then you only have one option. Finish taking that step!” – Sumire Kano 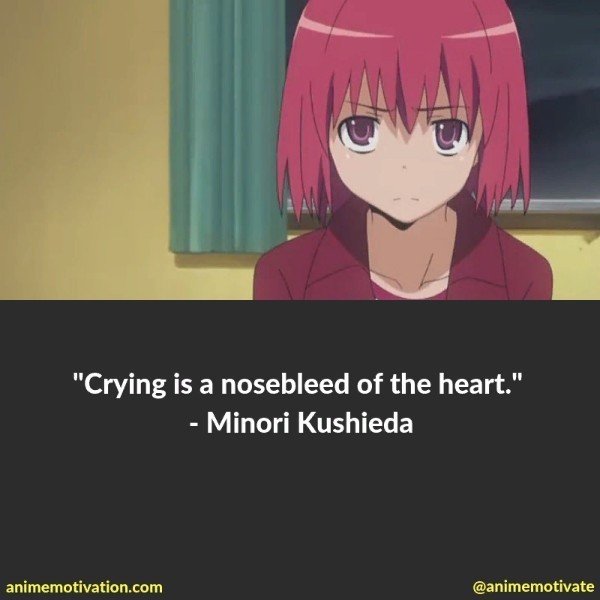 “Crying is a nosebleed of the heart.” – Minori Kushieda 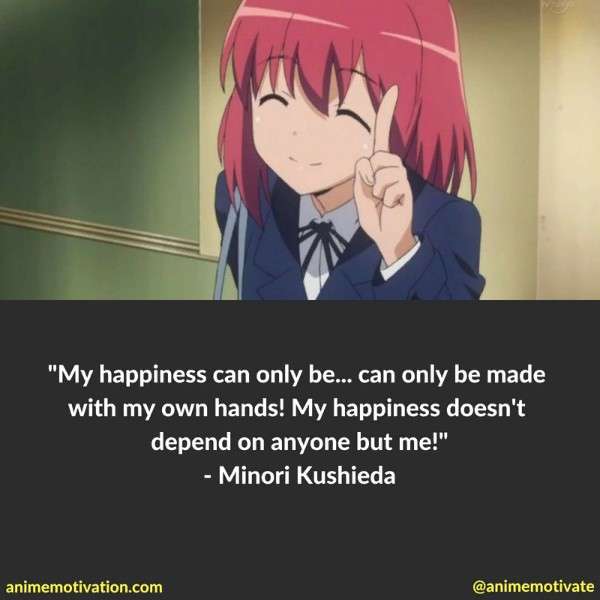 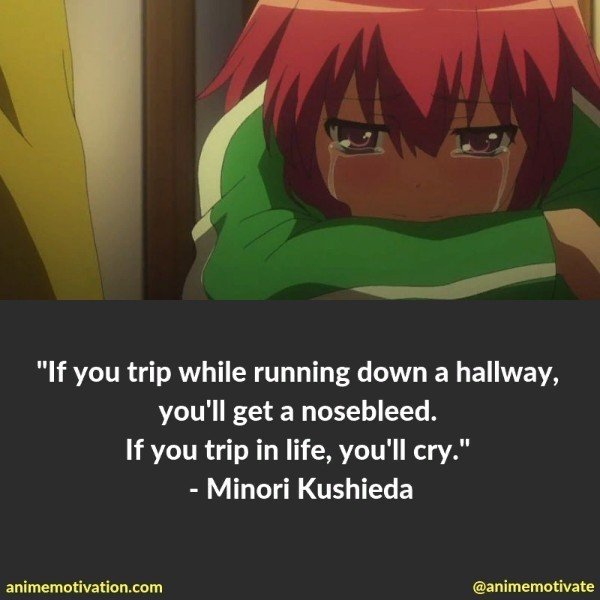 “If you trip while running down a hallway, you’ll get a nosebleed. If you trip in life, you’ll cry.” – Minori Kushieda 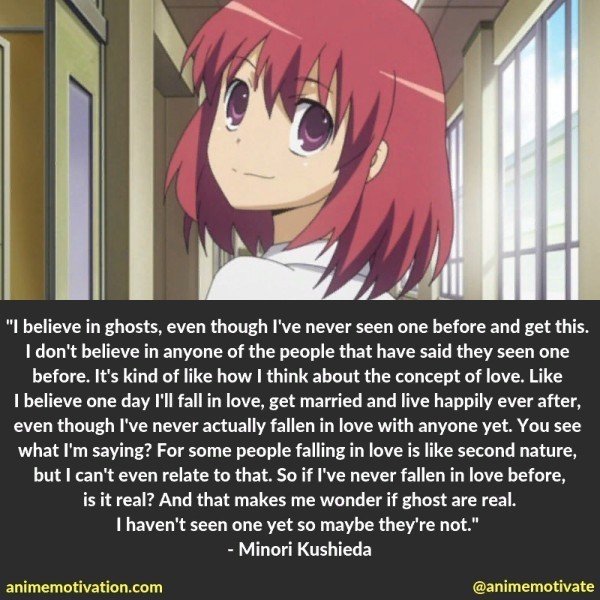 “I believe in ghosts, even though I’ve never seen one before and get this. I don’t believe in anyone of the people that have said they seen one before. It’s kind of like how I think about the concept of love. Like I believe one day I’ll fall in love, get married and live happily ever after, even though I’ve never actually fallen in love with anyone yet. You see what I’m saying? For some people falling in love is like second nature, but I can’t even relate to that. So if I’ve never fallen in love before is it real? And that makes me wonder if ghost are real. I haven’t seen one yet so maybe they’re not.” – Minori Kushieda 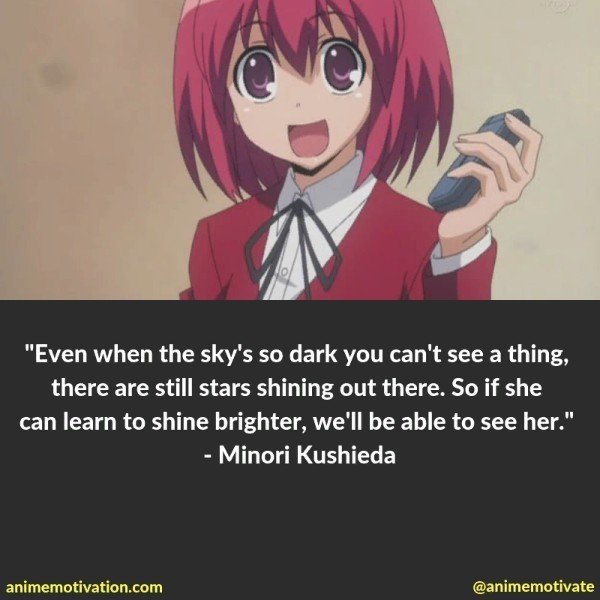 “Even when the sky’s so dark you can’t see a thing, there are still stars shining out there. So if she can learn to shine brighter, we’ll be able to see her.” – Minori Kushieda 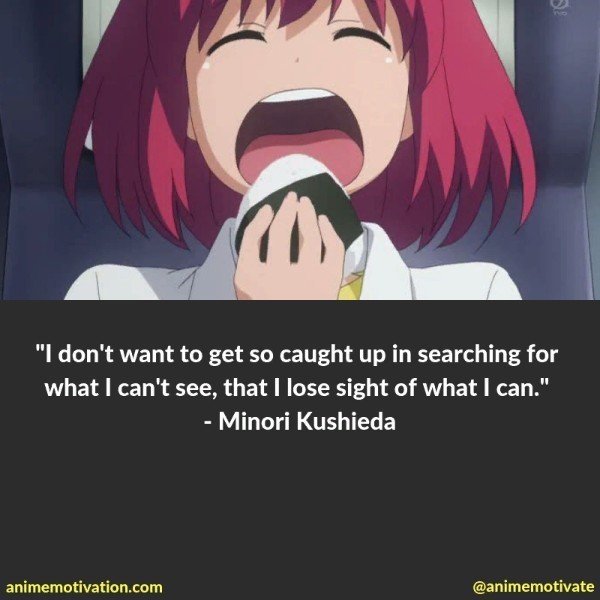 “I don’t want to get so caught up in searching for what I can’t see, that I lose sight of what I can.” – Minori Kushieda 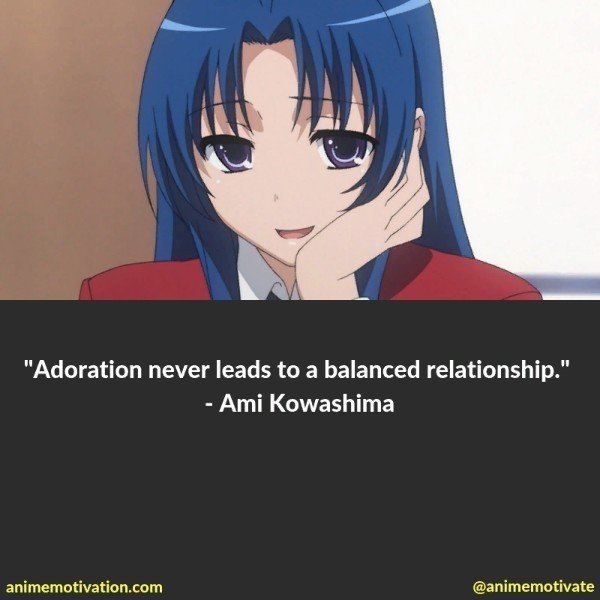 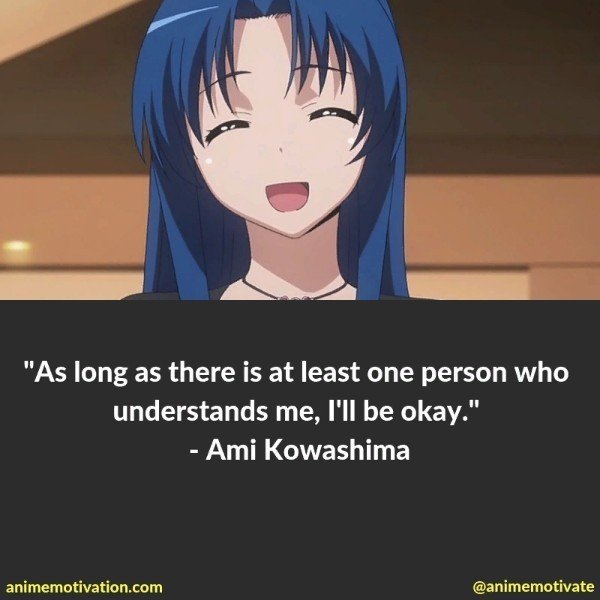 “As long as there is at least one person who understands me, I’ll be okay.” – Ami Kowashima 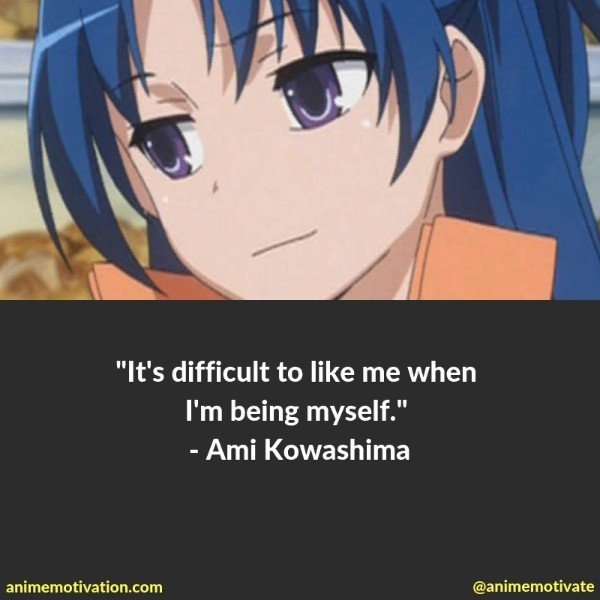 “It’s difficult to like me when I’m being myself.” – Ami Kowashima 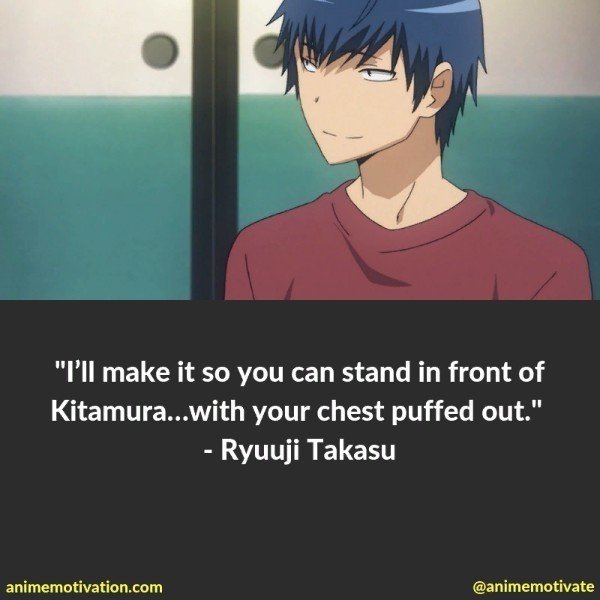 “I’ll make it so you can stand in front of Kitamura…with your chest puffed out.” – Ryuuji Takasu 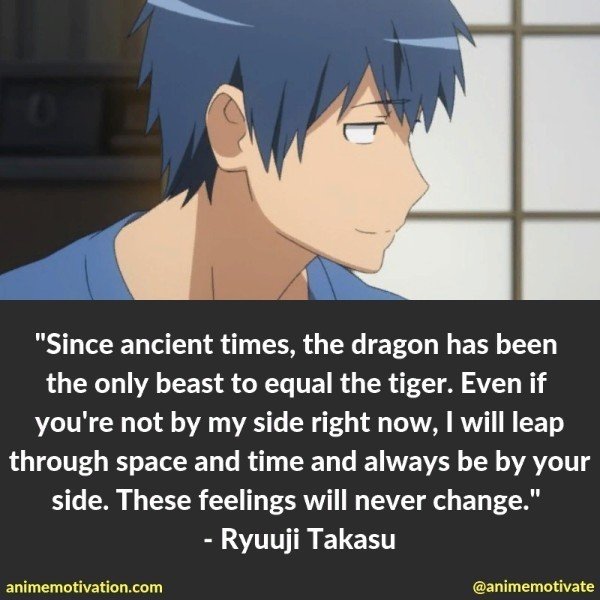 “Since ancient times, the dragon has been the only beast to equal the tiger. Even if you’re not by my side right now, I will leap through space and time and always be by your side. These feelings will never change.” – Ryuuji Takasu 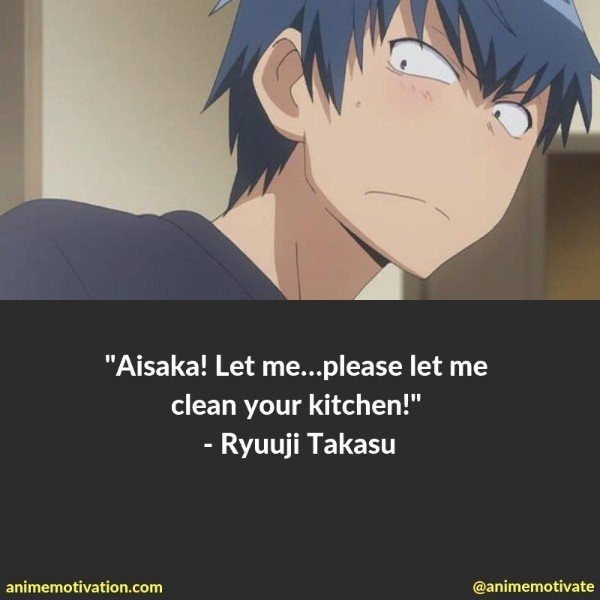 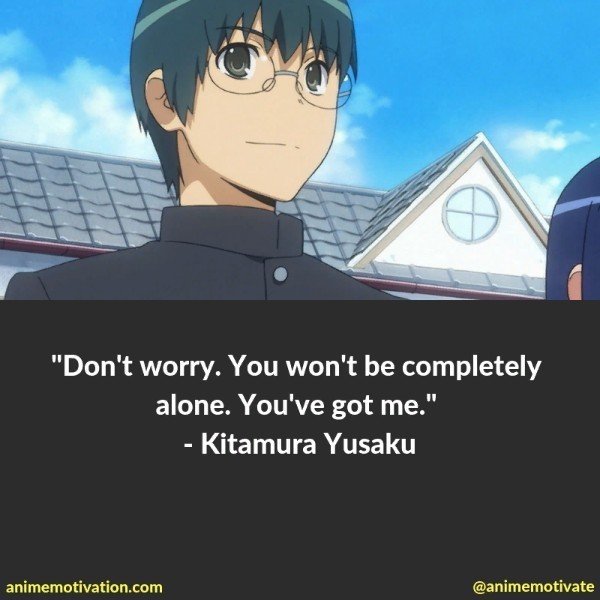 “Don’t worry. You won’t be completely alone. You’ve got me.” – Kitamura Yusaku 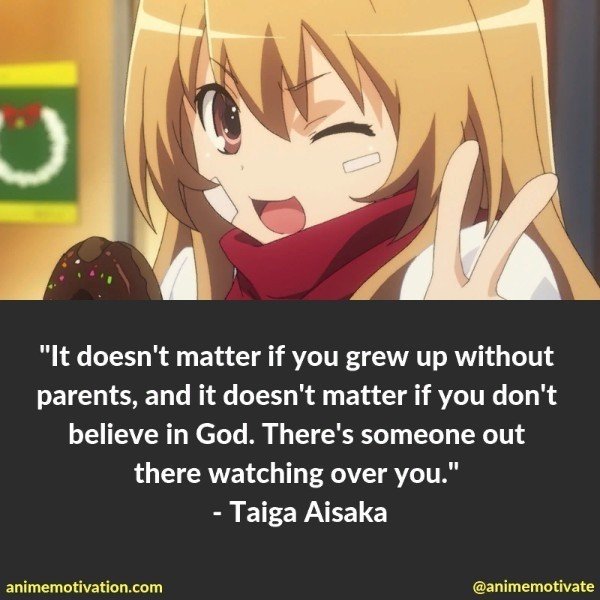 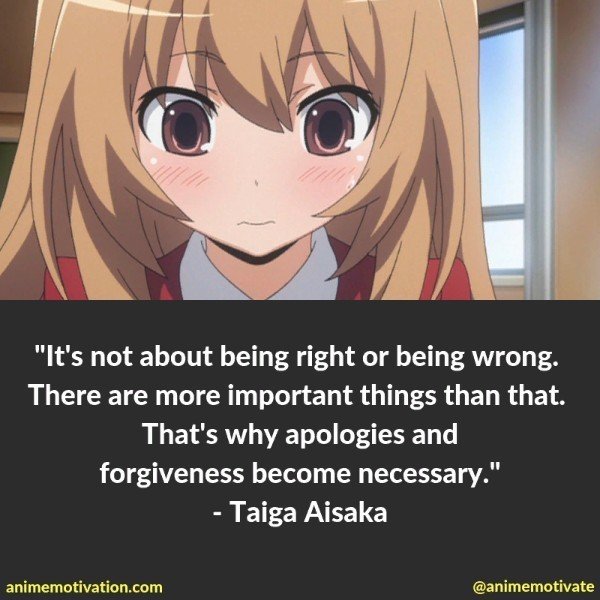 “It’s not about being right or being wrong. There are more important things than that. That’s why apologies and forgiveness become necessary.” – Taiga Aisaka 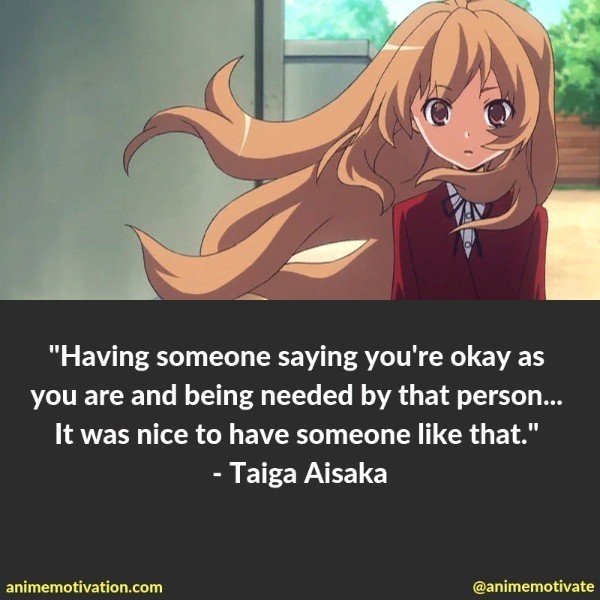 “Having someone saying you’re okay as you are and being needed by that person… It was nice to have someone like that.” – Taiga Aisaka 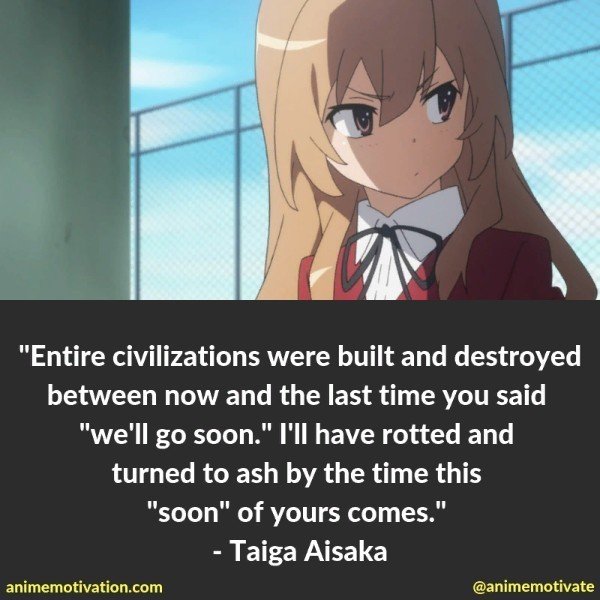 “Entire civilizations were built and destroyed between now and the last time you said “we’ll go soon.” I’ll have rotted and turned to ash by the time this “soon” of yours comes.” – Taiga Aisaka 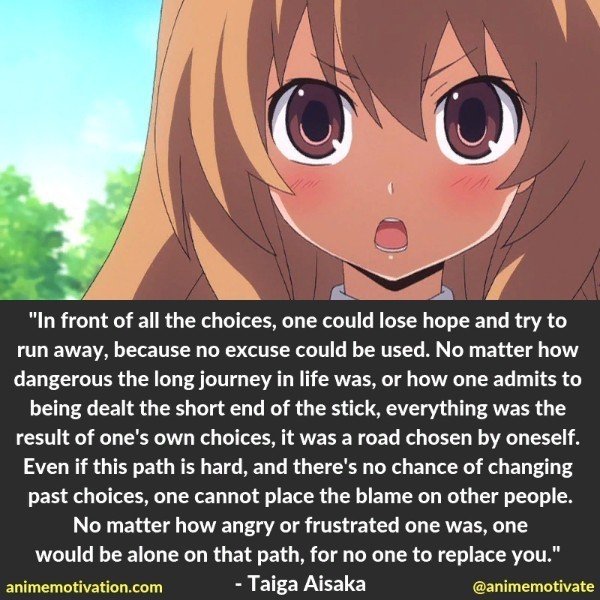 “In front of all the choices, one could lose hope and try to run away, because no excuse could be used. No matter how dangerous the long journey in life was, or how one admits to being dealt the short end of the stick, everything was the result of one’s own choices, it was a road chosen by oneself. Even if this path is hard, and there’s no chance of changing past choices, one cannot place the blame on other people. No matter how angry or frustrated one was, one would be alone on that path, for no one to replace you.” – Taiga Aisaka 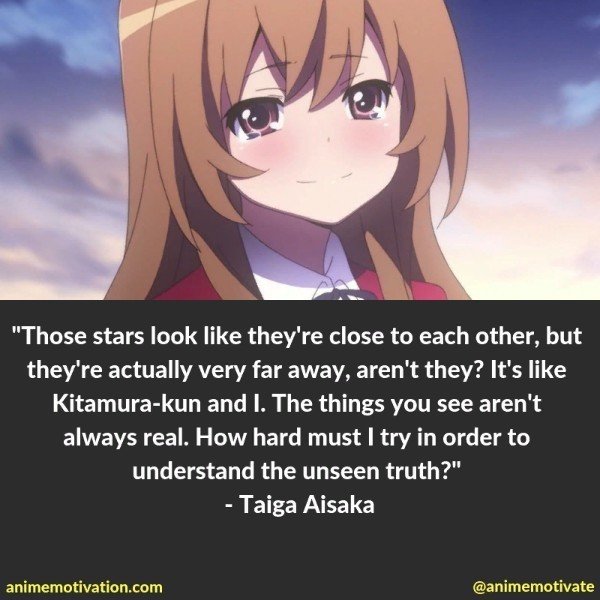 “Those stars look like they’re close to each other, but they’re actually very far away, aren’t they? It’s like Kitamura-kun and I. The things you see aren’t always real. How hard must I try in order to understand the unseen truth?” – Taiga Aisaka 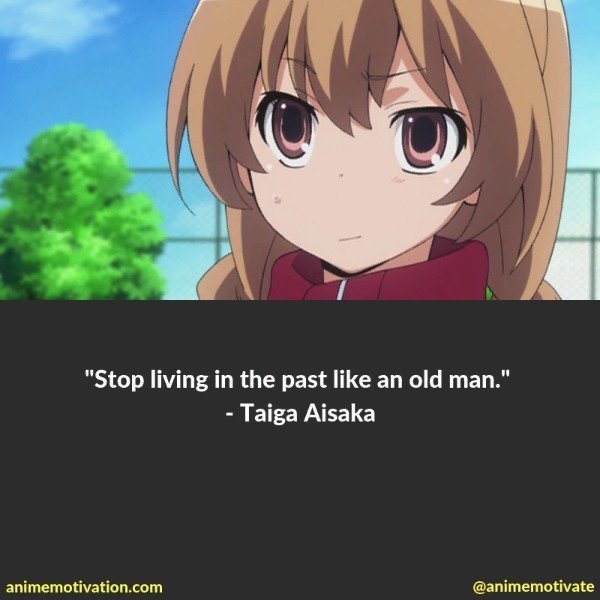 “Stop living in the past like an old man.” – Taiga Aisaka 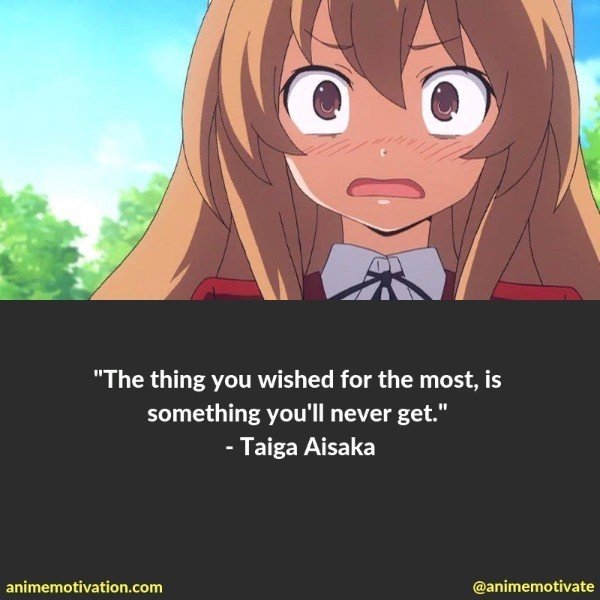 “The thing you wished for the most, is something you’ll never get.” – Taiga Aisaka 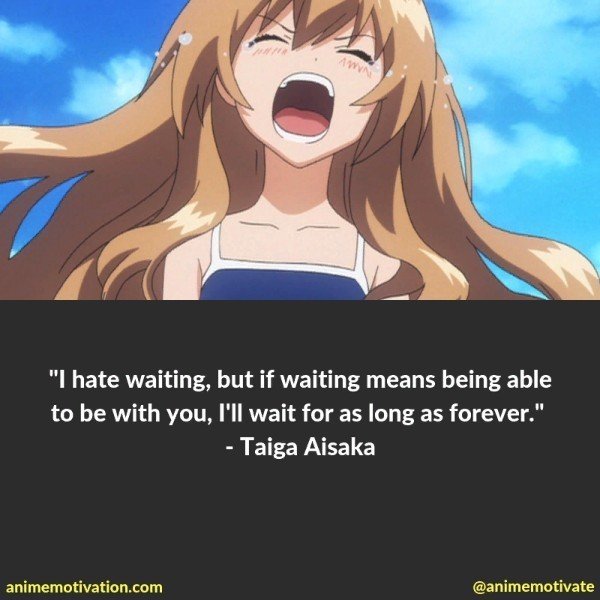 “I hate waiting, but if waiting means being able to be with you, I’ll wait for as long as forever.” – Taiga Aisaka 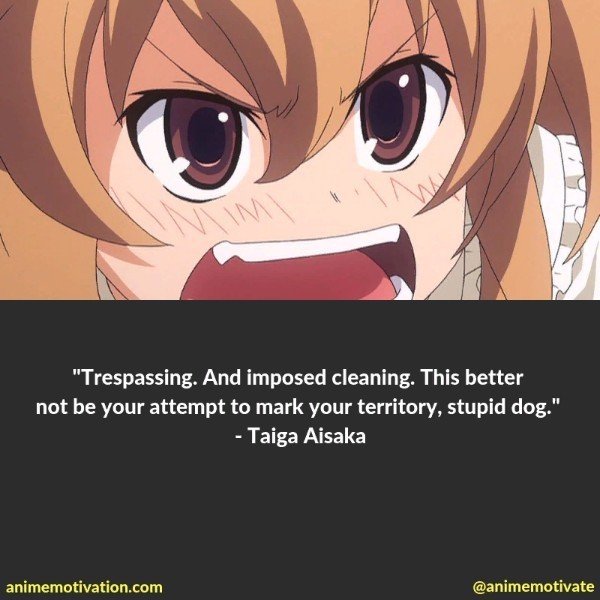 “Trespassing. And imposed cleaning. This better not be your attempt to mark your territory, stupid dog.” – Taiga Aisaka 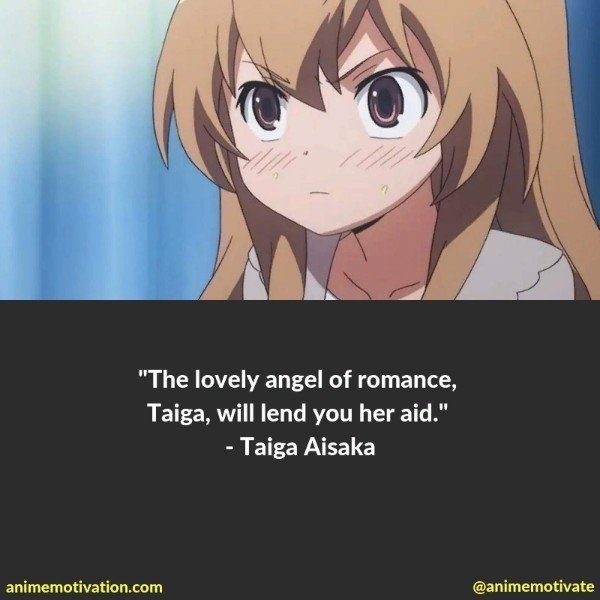 “The lovely angel of romance, Taiga, will lend you her aid.” – Taiga Aisaka 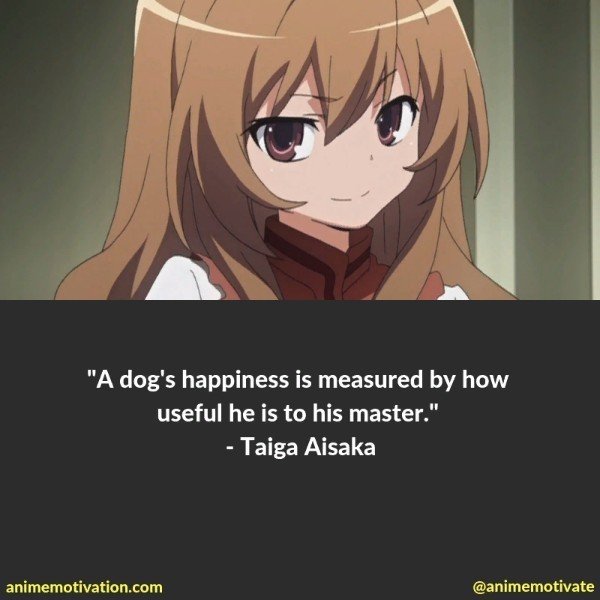 “A dog’s happiness is measured by how useful he is to his master.” – Taiga Aisaka

As always – quote suggestions should be left in the comments. Or shared on social media.

Read: 40 Of The Best Anime Quotes From Clannad