Itachi Uchiha is one of the most polarizing characters ever made. Many hate him with a passion, others love him to death.

His sacrifice in the has gone down in history and he’s one of the best written, complex characters.

It’s these complexities, his emotions, and contradictions (on the surface) that bring light to his quotes.

Many you can relate to and understand, while others are character defining and will take you back.

Either way, here’s the best Itachi Uchiha has to offer with quotes from ! 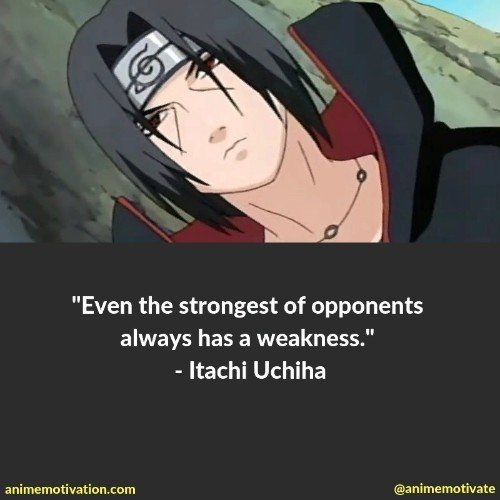 “Even the strongest of opponents always has a weakness.” – Itachi Uchiha 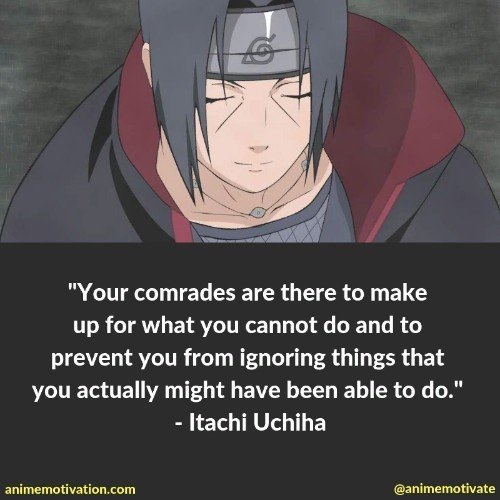 “Your comrades are there to make up for what you cannot do and to prevent you from ignoring things that you actually might have been able to do.” – Itachi Uchiha 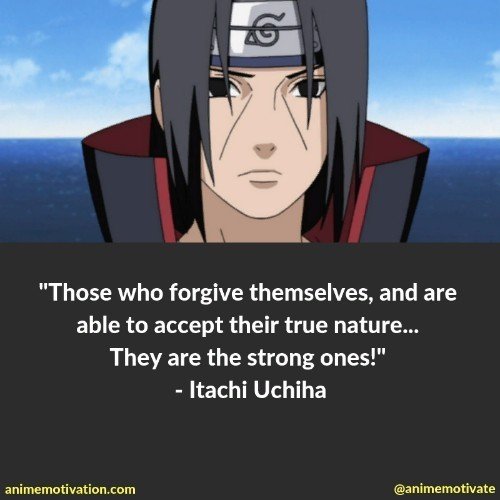 “Those who forgive themselves, and are able to accept their true nature… They are the strong ones!” – Itachi Uchiha 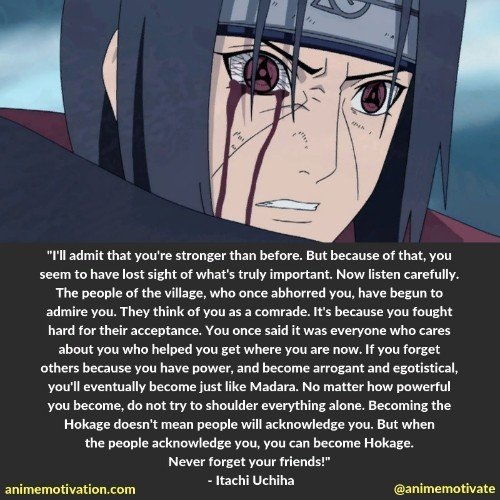 “I’ll admit that you’re stronger than before. But because of that, you seem to have lost sight of what’s truly important. Now listen carefully. The people of the village, who once abhorred you, have begun to admire you. They think of you as a comrade. It’s because you fought hard for their acceptance. You once said it was everyone who cares about you who helped you get where you are now. If you forget others because you have power, and become arrogant and egotistical, you’ll eventually become just like Madara. No matter how you become, do not try to shoulder everything alone. Becoming the Hokage doesn’t mean people will acknowledge you. But when the people acknowledge you, you can become Hokage. Never forget your friends!” – Itachi Uchiha 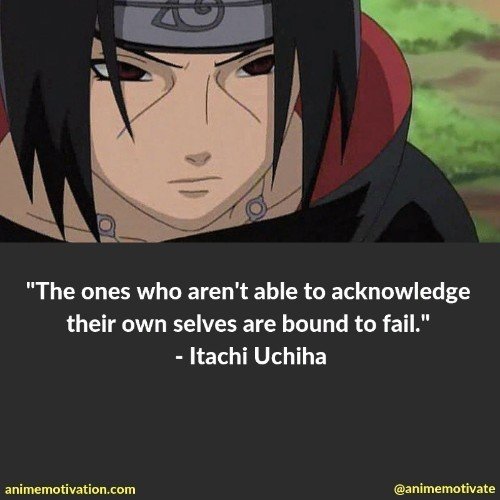 “The ones who aren’t able to acknowledge their own selves are bound to fail.” – Itachi Uchiha 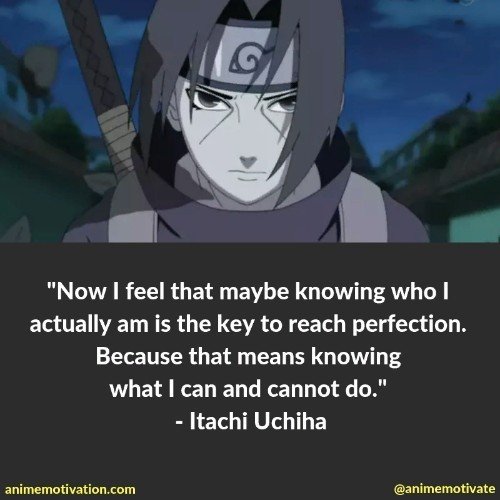 “Now I feel that maybe knowing who I actually am is the key to reach perfection. Because that means knowing what I can and cannot do.” – Itachi Uchiha 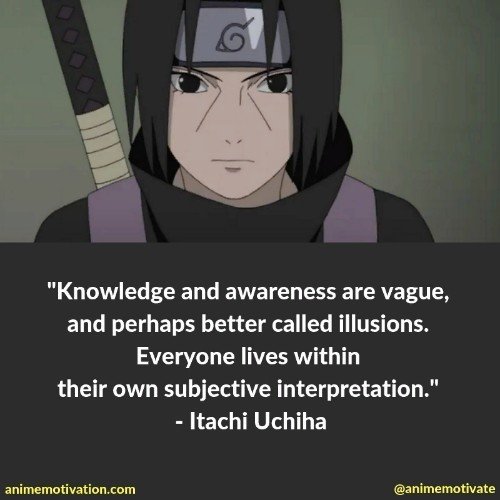 “Knowledge and awareness are vague, and perhaps better called illusions. Everyone lives within their own subjective interpretation.” – Itachi Uchiha 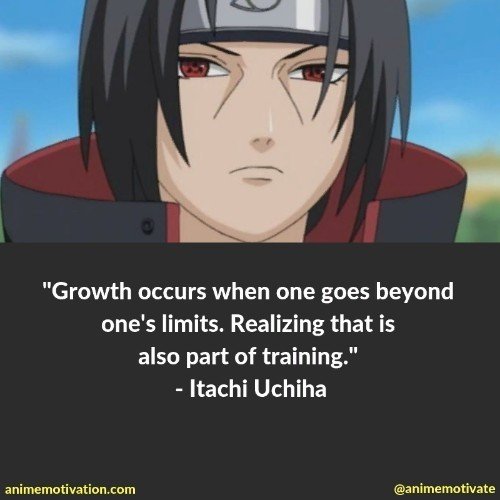 “Growth occurs when one goes beyond one’s limits. Realizing that is also part of training.” – Itachi Uchiha 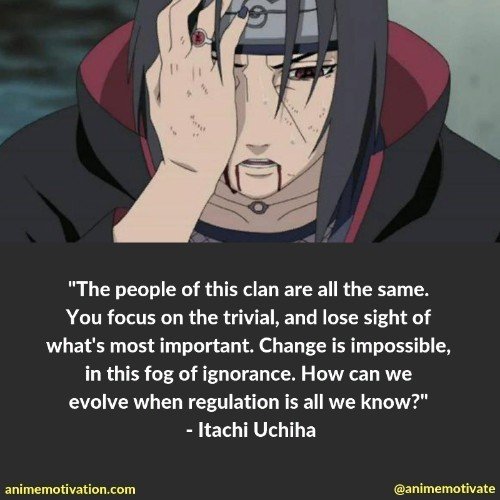 “The people of this clan are all the same. You focus on the trivial, and lose sight of what’s most important. Change is impossible, in this fog of ignorance. How can we evolve when regulation is all we know?” – Itachi Uchiha 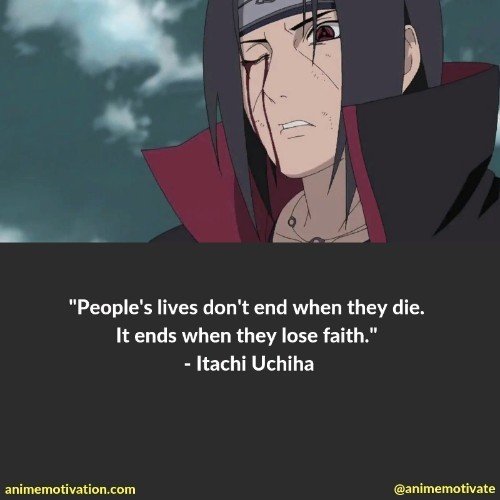 “People’s lives don’t end when they die. It ends when they lose faith.” – Itachi Uchiha 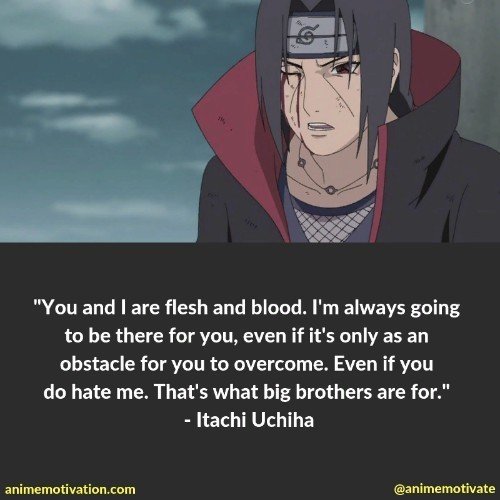 “You and I are flesh and blood. I’m always going to be there for you, even if it’s only as an obstacle for you to overcome. Even if you do hate me. That’s what big brothers are for.” – Itachi Uchiha 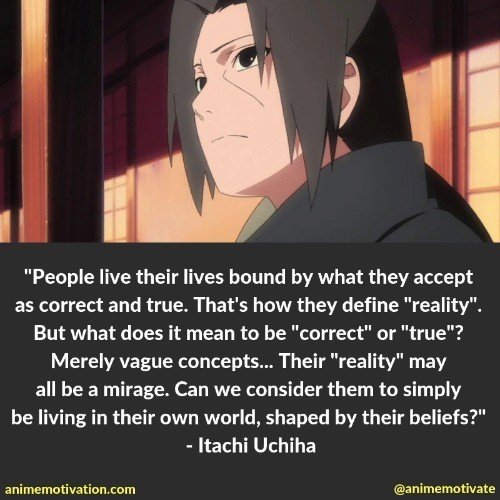 “People live their lives bound by what they accept as correct and true. That’s how they define “reality”. But what does it mean to be “correct” or “true”? Merely vague concepts… Their “reality” may all be a mirage. Can we consider them to simply be living in their own world, shaped by their beliefs?” – Itachi Uchiha 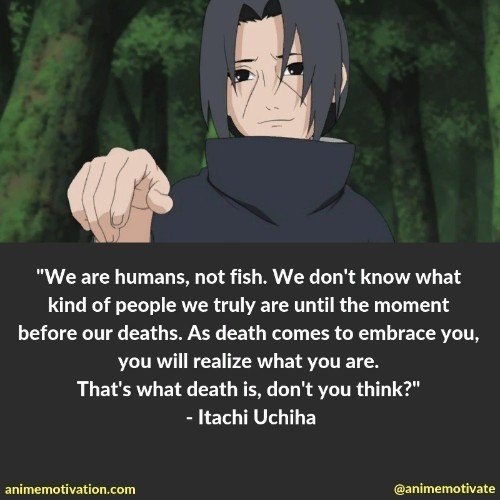 “We are humans, not fish. We don’t know what kind of people we truly are until the moment before our deaths. As death comes to embrace you, you will realize what you are. That’s what death is, don’t you think?” – Itachi Uchiha 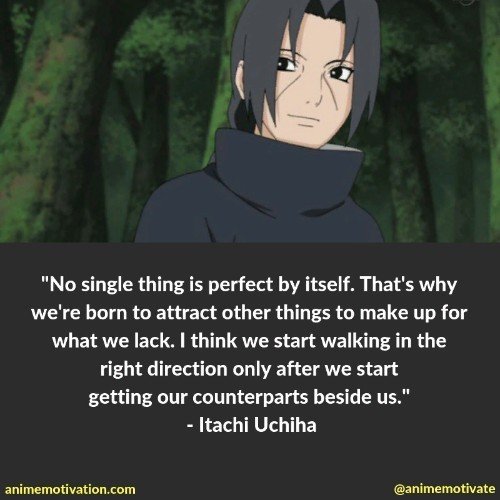 “No single thing is perfect by itself. That’s why we’re born to attract other things to make up for what we lack. I think we start walking in the right direction only after we start getting our counterparts beside us.” – Itachi Uchiha

24+ Of The Greatest Kakashi Hatake Quotes for Naruto Fans

The Most Important Sasuke Uchiha Quotes For Naruto Fans