Kakashi Hatake is one of the best anime Sensei’s/teachers in the history of anime.

He’s laid back and chill, and doesn’t get overly emotional at the slightest thing. That speaks to his life experiences and pain.

He’s modest and easy to talk to. And that plays into his role in , and of course – how memorable he is.

Some are inspirational, deep, motivating, and have something to learn from! 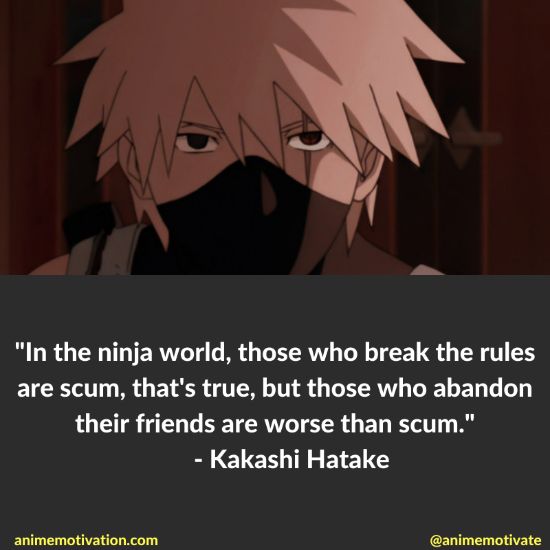 “In the ninja world, those who break the rules are scum, that’s true, but those who abandon their friends are worse than scum.” – Kakashi Hatake 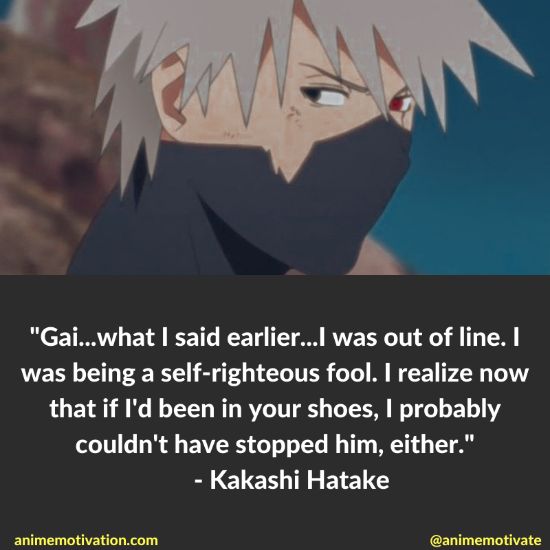 “Gai…what I said earlier…I was out of line. I was being a self-righteous fool. I realize now that if I’d been in your shoes, I probably couldn’t have stopped him, either.” – Kakashi Hatake 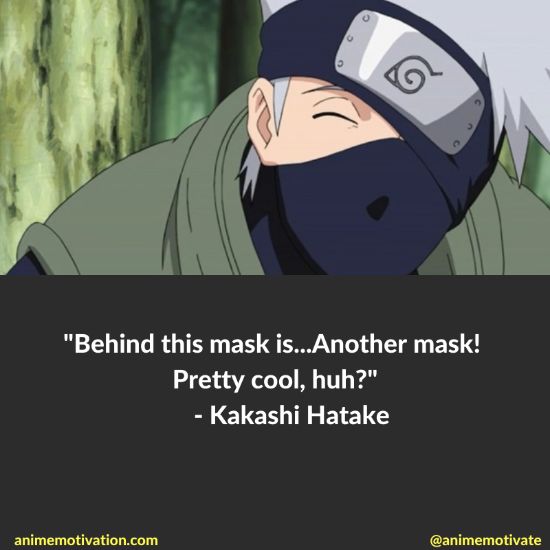 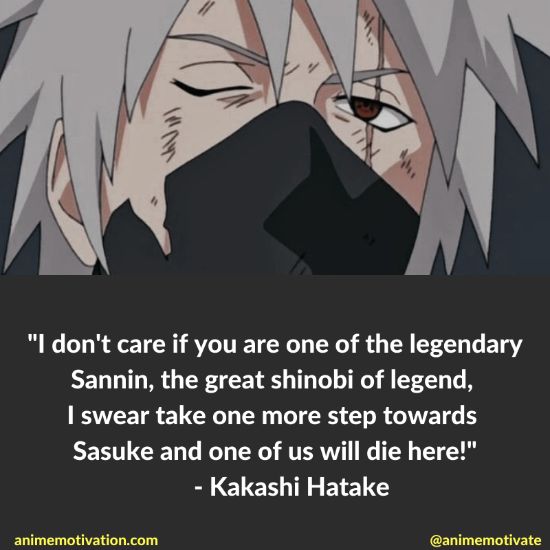 “I don’t care if you are one of the legendary Sannin, the great shinobi of legend, I swear take one more step towards Sasuke and one of us will die here!” – Kakashi Hatake 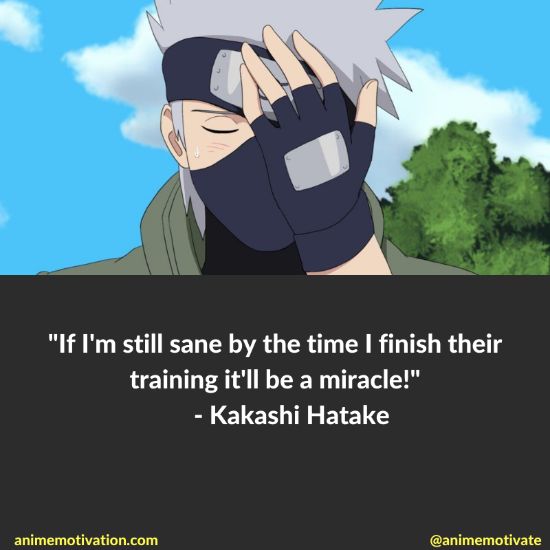 “If I’m still sane by the time I finish their training it’ll be a miracle!” – Kakashi Hatake 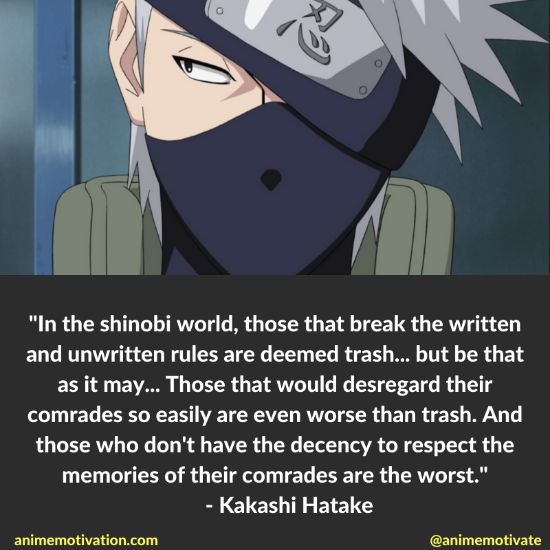 “In the shinobi world, those that break the written and unwritten rules are deemed trash… but be that as it may… Those that would desregard their comrades so easily are even worse than trash. And those who don’t have the decency to respect the memories of their comrades are the worst.” – Kakashi Hatake 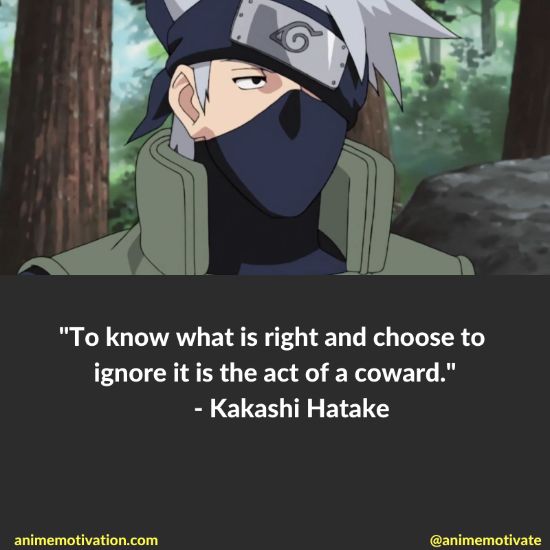 “To know what is right and choose to ignore it is the act of a coward.” – Kakashi Hatake

“No matter how far Orochimaru fell, he still loved him… Now I know how the Third Hokage felt.” – Kakashi Hatake 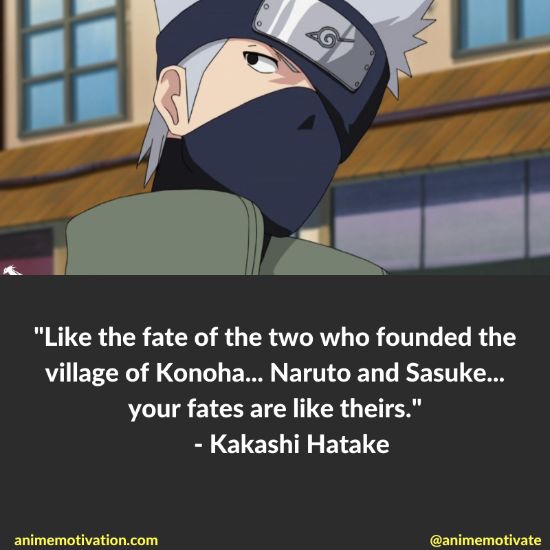 “Like the fate of the two who founded the village of Konoha… and Sasuke…your fates are like theirs.” – Kakashi Hatake 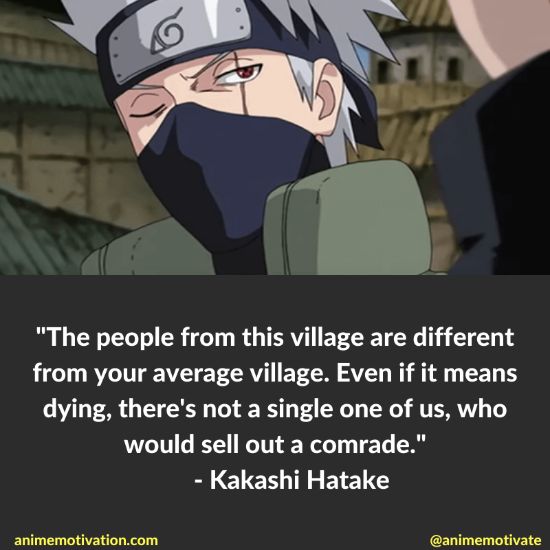 “The people from this village are different from your average village. Even if it means dying, there’s not a single one of us, who would sell out a comrade.” – Kakashi Hatake 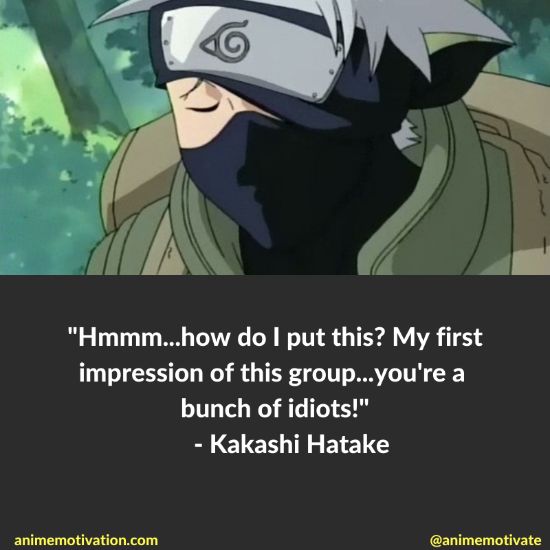 “Hmmm…how do I put this? My first impression of this group…you’re a bunch of idiots!” – Kakashi Hatake 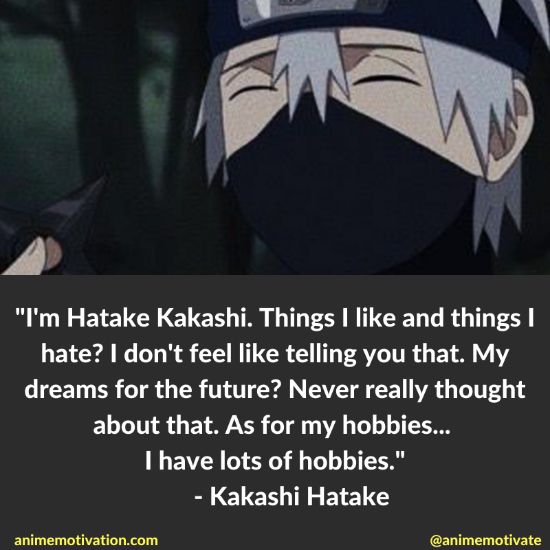 “I’m Hatake Kakashi. Things I like and things I hate? I don’t feel like telling you that. My dreams for the future? Never really thought about that. As for my hobbies… I have lots of hobbies.” – Kakashi Hatake

“Regardless of what happened, you did the best you could. I understand that now…you broke the rules for all our sakes – I’m proud of you now.” – Kakashi Hatake

“I don’t know what this boy means to you, Gai, but I shouldn’t have to tell you that we never bring our personal feelings into play. I didn’t think you were capable of it.” – Kakashi Hatake 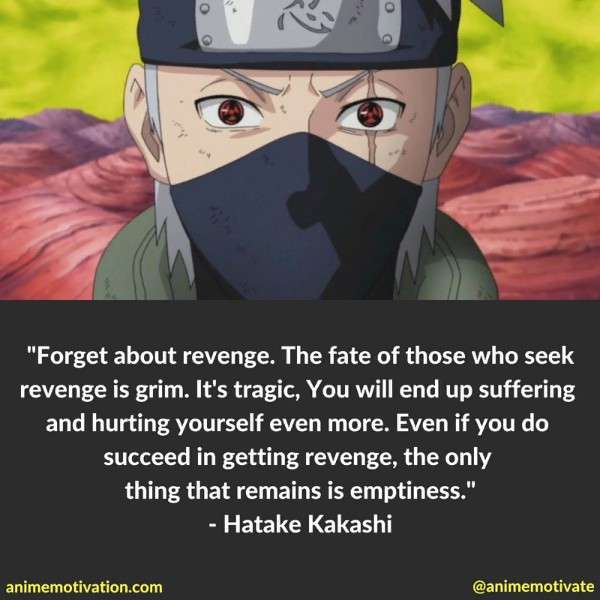 “Forget about revenge. The fate of those who seek revenge is grim. It’s tragic, You will end up suffering and hurting yourself even more. Even if you do succeed in getting revenge, the only thing that remains is emptiness.” – Hatake Kakashi 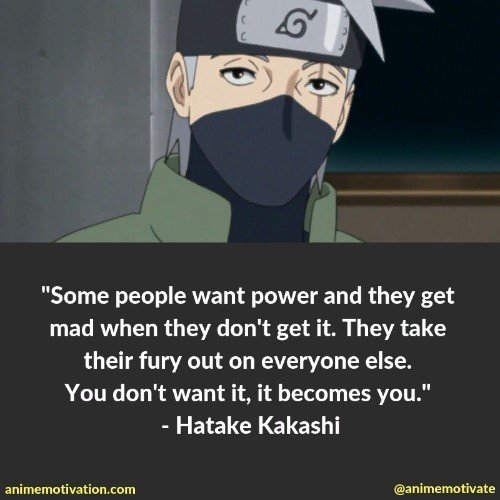 “Some people want power and they get mad when they don’t get it. They take their fury out on everyone else. You don’t want it, it becomes you.” – Hatake Kakashi 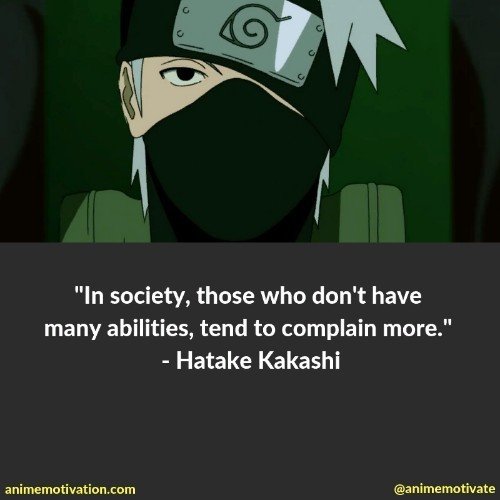 “In society, those who don’t have many abilities, tend to complain more.” – Hatake Kakashi 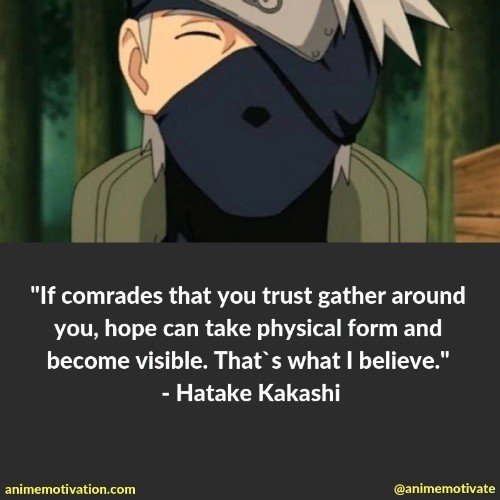 “If comrades that you trust gather around you, hope can take physical form and become visible. That`s what I believe.” – Hatake Kakashi 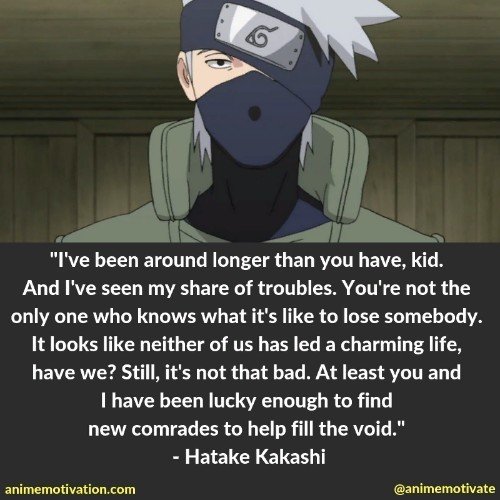 “I’ve been around longer than you have, kid. And I’ve seen my share of troubles. You’re not the only one who knows what it’s like to lose somebody. It looks like neither of us has led a charming life, have we? Still, it’s not that bad. At least you and I have been lucky enough to find new comrades to help fill the void.” – Hatake Kakashi 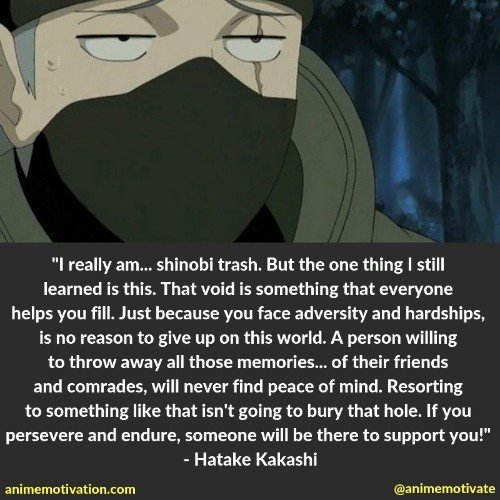 “I really am… shinobi trash. But the one thing I still learned is this. That void is something that everyone helps you fill. Just because you face adversity and hardships, is no reason to give up on this world. A person willing to throw away all those memories… of their friends and comrades, will never find peace of mind. Resorting to something like that isn’t going to bury that hole. If you persevere and endure, someone will be there to support you!” – Hatake Kakashi 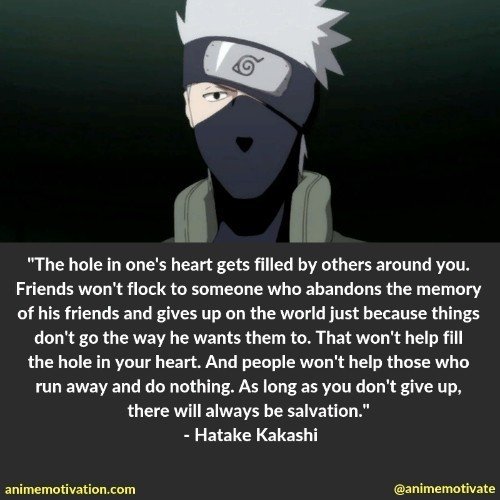 “The hole in one’s heart gets filled by others around you. Friends won’t flock to someone who abandons the memory of his friends and gives up on the world just because things don’t go the way he wants them to. That won’t help fill the hole in your heart. And people won’t help those who run away and do nothing. As long as you don’t give up, there will always be salvation.” – Hatake Kakashi 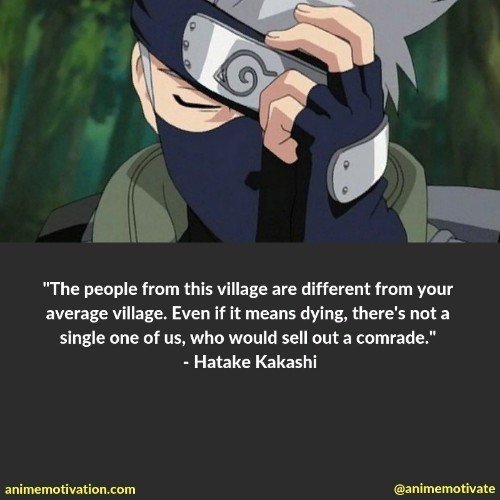 “The people from this village are different from your average village. Even if it means dying, there’s not a single one of us, who would sell out a comrade.” – Hatake Kakashi

22+ Yashahime Quotes For Fans Of The Inuyasha Franchise!