The artists you’re about to meet are the best in cosplay.

“Cosplay” is the abbreviated word for the term “costume play”. Though with cosplay this good, it’s hard to classify their serious costume crafting as “playing.”

They’ve earned the title of greatest cosplayers for a reason, and you can see the serious commitment to their work shine through in their content.

anime’s top franchises, and it has the fan-base to prove it.

Cosplay enthusiasts from all over the world have settled in America, and the country is beaming with talent when it comes to creativity, designing, modelling, and all sorts of entertainment.

Professional cosplayers in the US, but also around the World engage in high-level cosplay overflowing with creativity and pure skill.

With that said, let’s showcase some of these people! 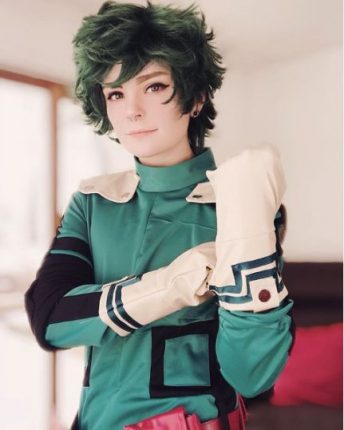 anime and @Teagamu shows why that will be the case for years to come.

Sharing her take on Izuku Midoriya under his hero costume, Deku seems about ready to train or fight against a strong opponent.

What brings it together is that little grin that seems to state that she is superior to all those around her.

… What it means to be a hero… ▪️ It’s crazy to think about all that has happened within a single year. I have grown so much as a person and a cosplayer. I have made new friends, ones in which I have been blessed to be able to hold in an embrace and those in which I still have yet to do that with. I have been pushed above and beyond my comfort zone to become someone greater than the girl who sat here 365 days ago. And the only thing I have to thank is My Hero Academia. With season four in the midst, everyone who is apart of this fandom is beyond excited, which of course isn’t excluding myself. But this isn’t about the season four hype at all… Today marks the very day I picked up my laptop and began watching My Hero Academia a year ago. This year has felt so short… yet so long. I have been exposed to new things and people throughout it all. I became a new person through this franchise. I was able to finally learn what it truly meant to express myself. I just want to take a moment to thank each and everyone of you who have supported me over the last year. I also want to thank Horikoshi for creating this story that has touched the hearts of thousands. The story of Deku and his classmates will forever have a place within my heart. Thank you for everything, MHA. ❤️ ▪️ FAQ -Wig is from @ardawigs (Hansel in Olive) -Contacts are from @ttd_eye / @ttdeyeofficial (Bee Green) ▪️ Use my code “BLUEBEAN” for 10% off any TTDEYE purchase! ▪️ Photo Credits to @alexreedimages ❤️ ▪️ Oct. 5th 2018- Oct. 5th 2019

What most of us experience is the ‘product.’ The end result. But there is a person underneath that costume.

Turns out, there is a whole lot more to cosplay than just what can be photographed and put into galleries.

The degree to which a cosplayer might take it upon themselves to create a costume and reach “screen accuracy” is staggering.

@bennylin_ as Izuku Midoriya is a perfect example.

Details play a crucial role in portraying a character. And body language is an essential way to embody your character.

In the world of cosplay, you should know that creativity is one of the pillars of a real cosplayer.

Being unique or adding it in a different way will set you apart and add unique value. That’s what @sammyscosplay reflects with this Deku Cosplay.

One of my favorite cosplay in terms of reference for the anime is @valesti. Paying tribute to our protagonist, Izuku Midoriya.

It’s from during the fight against Shoto Todoroki, using the Delaware smash.

As charisma and natural physique can play an important role as a cosplayer, @Rolyat, also known as Taylor, gives us a demonstration with this cosplay of Izuku Midoriya.

It’s another way to stand out and give an extra touch of charm and authenticity!

One’s natural body poses more challenges than one might think when it comes to cosplay.

Cosplayers will tell you it’s not about looking exactly like a character, especially if it’s physically impossible

But about having fun and engaging with the community. Here is a real cosplayer embodying Izuku Midoriya under his beta costume, with a combative and combat-ready look.

The quality of the photography reveals important details such as the scratches on these gloves, the white shoulder pads, and the mask!

Some enthusiasts get angry when someone dares to cosplay as someone that’s a different gender, race or especially body type. Sometimes, accusations of doing a “sexy” cosplay merely for attention rise, and here is where the “fake” stuff pop up.

However, the work done remains just as disciplined, especially for this really magnificent cosplay of the One for all holder!

This cosplay of Izuku Midoriya, made by @zencosplays is a perfect representation of the moment against Muscular, while Vanguard Action Squad invaded the Beast’s Forest.

This cosplay I present to you is for me, the most successful cosplay to pay tribute to .

Indeed, @OhMySophii knew how to make her passion a job thanks to absolutely all the information gathered from the tops above.

The posture as if she’s in the middle of a fight. The wear and tear of Deku’s clothes and the expressive features of his face, the background that naturally makes photography homogeneous.

But also, the special effects of One for all, which is only visible on Izuku Midoriya.

All criteria have been taken into consideration to make a photograph of our Hero so successfully.

24 Anime Action Figure Photography Pics That Will Blow You