But either way – there are only a couple dozen black anime characters to begin with.

Whatever your thoughts are, leave them in the comments. Or share other black male characters that I’ve missed in this post.

With that out the way… 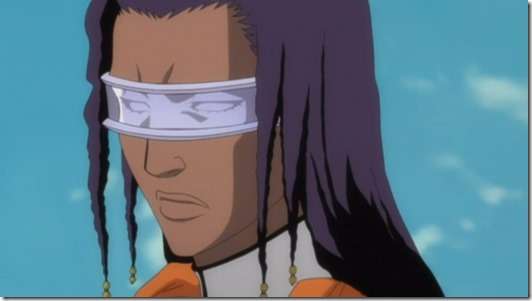 Tosen Kaname’s one of the main soul reapers from: .

He probably has one of the most interesting abilities as a soul reaper as well. I can’t say he has much of a personality.

Tosen’s the quiet type who doesn’t say too much. But it’s clear he’s intelligent and sharp.

Overall he’s too famous to NOT include in this list. 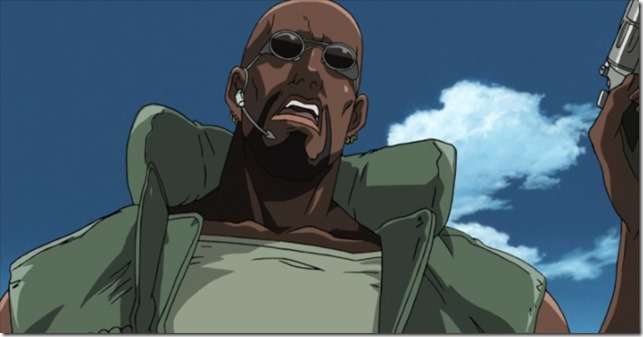 I’d say Dutch is one of my favorite black male characters in anime.

He’s one of the main characters in gangster series: Black Lagoon.

He’s tall, muscular, and would probably knock you the F** out if you cross the line.

Dutch is a laid back, chilled character on the surface. But is dead-serious when the situation calls for it. 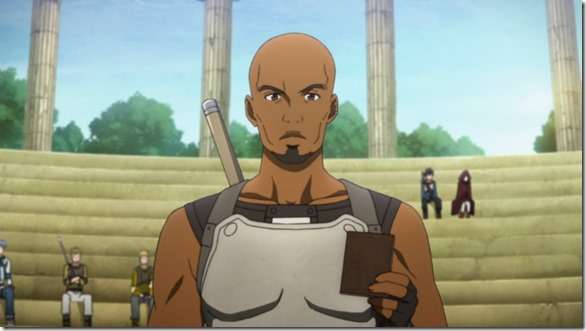 This is the anime series Andrew Gilbert Mills is featured in. As a support character.

Similar to Dutch, Andrew is laid-back, chilled, and doesn’t want any trouble.

One of his specialties is making/crafting weapons in SAO.

Which is crucial to their survival in season 1. 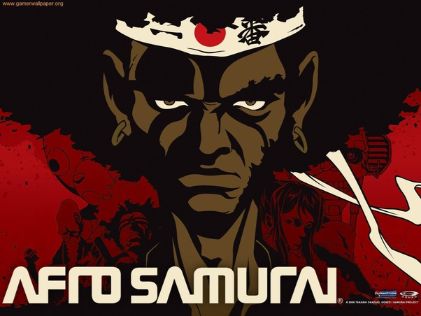 He’s called Afro for short and is the main protagonist of the series, and a highly skilled swordsman.

Afro’s role is built on vengeance. The trigger is his father: Rokutaro who’s literally decapitated right in front of Afro in his younger days. 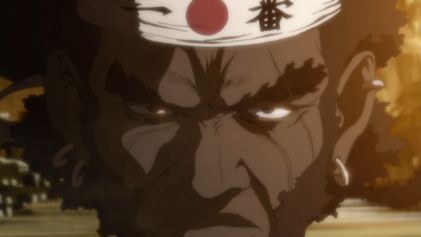 This trauma (as it would a lot of people) is what turns Afro into a cold blooded killer.

Samuel L Jackson is the voice actor for AFRO in the dubbed version. 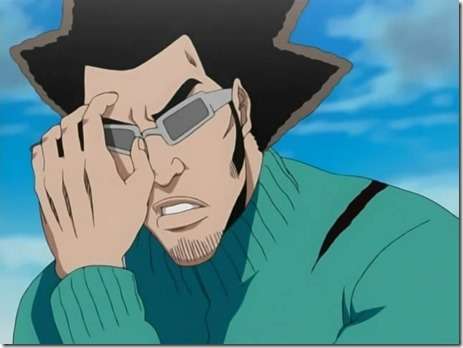 Love Aikawa’s one of many Visored characters from: .

Similar to Andrew Gilbert Mills, he’s laid back, chilled, and a cool guy to hang out with.

Most of the time he keeps a cool head, and is much more powerful than he first appears. 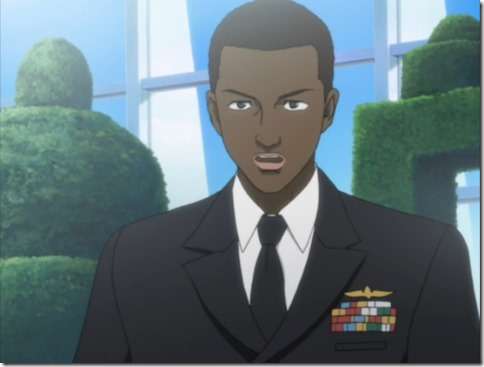 If you’ve watched the anime series – Blood+ then you’ll recognize this guy.

He’s one of Diva’s Chevalier’s who protect her from danger.

One thing about James Ironside is he’s calm, lacks a sense of humour and likes being on time.

James is also a leader with strong leadership skills.

And has a background in the US . 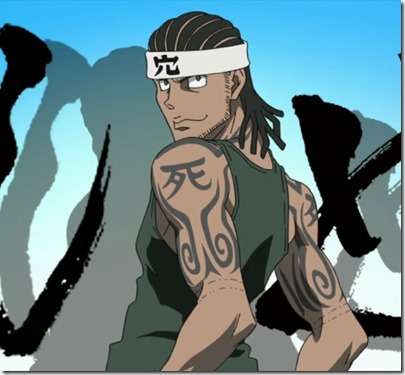 Have you seen the anime series – Soul Eater?

Sid Barret is one of the X teachers who taught at the Death Scythe Meister Academy.

Similar to Koro Sensei, Sid’s an exceptional teacher. And his students love him to death.

As well as his teaching methods and style.

But this changes after he’s turned into a zombie at the beginning of Soul Eater.

Related: 28 Soul Eater Anime Quotes That Are Dark And Meaningful 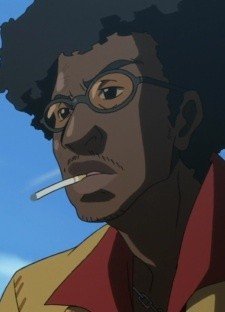 Satoshi Batista is one of the known gangsters in Michiko To Hatchin. A world filled with black characters and Latino’s set in Brazil.

He doesn’t show up until later into the anime, but he pays an important role in how things turn out.

In fact – Satoshi’s role is so good you could pass him off as a main character.

His dubbed voice is stellar as well. 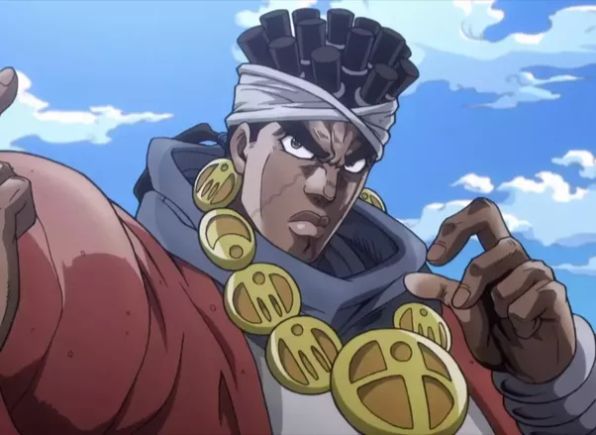 In the world of Jojo – Avdol is a black man from Egypt in particular.

From his hairstyle, to necklace, and overall – he stands out as a Jojo character.

He’ll do anything to keep up his image of being seen as , responsible, and someone who’s a leading example to others.

Many times in Jojo’s Bizarre Adventure he makes this crystal clear. This makes him a serious type of anime character.

Related: 40+ Quotes You Need To See If You Love Jojo’s Bizarre Adventure 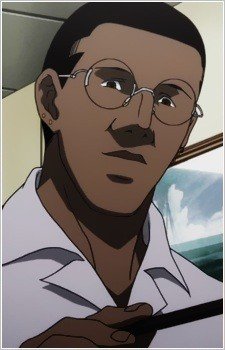 Jormungand is an anime about arms dealers, lead by female character: Koko Hekmatyar.

William Nelson, or Wiley (nickname) is an explosives expert who teaches one of the main characters English.

Smart and dangerous, and respectful of those around him. That’s the kind of persona Wiley gives off.

He’s always seen wearing for the most part and is one of the tallest black characters. 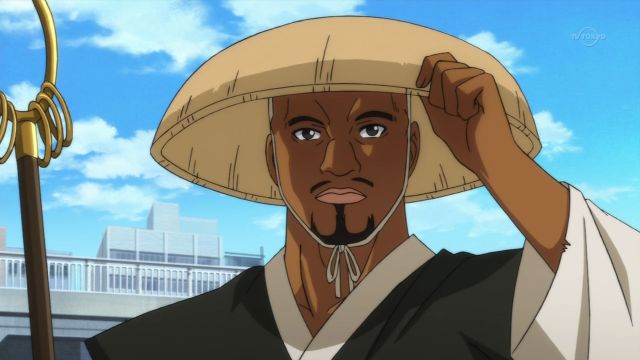 Bobby is one of the highlights of Good Luck Girl. Without him – the anime isn’t complete.

Bobby’s not the main character, but his association and humor adds to Good Luck Girl so much.

This is true whether we’re talking about the subbed or dubbed version of his voice actor. 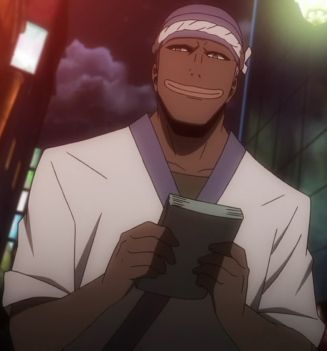 Simon is a black man born in Russia. And is one of the strongest characters (physically), cosigned by Izaya. A strong character himself.

Regardless – he’s not the type to throw his weight around or use his strength to his advantage.

He’s usually the guy trying to stop a fight to avoid conflict.

If you have more to add, leave it in the comments.