Action are extremely popular, and always build a large audience.

it’s partially thanks to that fact that some shows are going to get lost in the shuffle.

Action usually have a fair amount of sub genres added to them.

Here’s some recommendations you may not have considered: 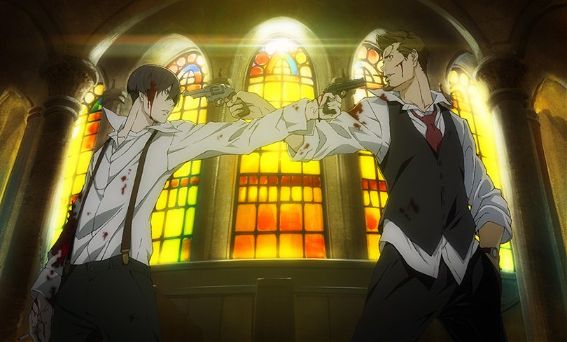 Set during prohibition, this high action tale Involves the mafia killing a family, and the sole survivor going down a dark path to seek revenge.

Not to mention them befriending an unlikely ally along the way  which will keep you glued to the screen for hours on end! 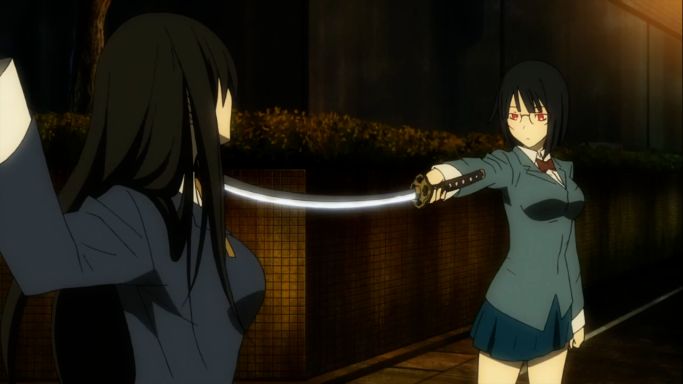 Set in Ikebukuro, this show follows the cast through the gritty and gang filled nightlife of the Tokyo’s downtown district.

With an engaging story, this will take you through many twists and turns, and it’s not shy about violence.

Related: 55+ Timeless Quotes From Durarara That Will Make You Think 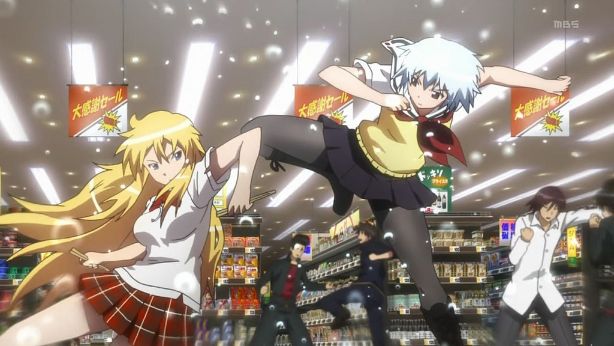 Who knew supermarkets could be a battleground!

This intriguing gem follows You Satou after he stumbles into the wrong place at the wrong time.

Instead of backing down he decides to stand his ground and joins up with the Half-Priced Food Lovers Club. 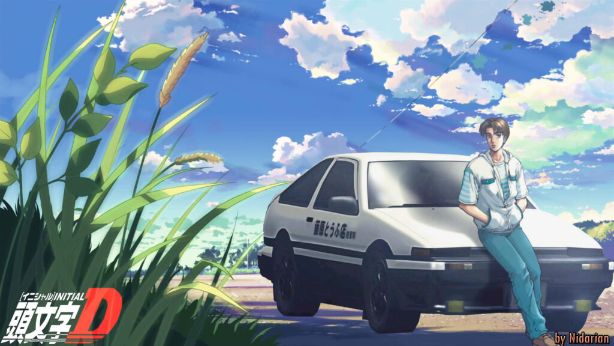 An absolute classic, this series follows Takumi Fujiwara, a tofu delivery boy as he gets sucked into the world of Japanese street racing.

This show is popular, but some newer fans may skip over it given its age and use of CGI.

It’s sure to send the heart of any action fan racing, and will keep you firmly engaged. 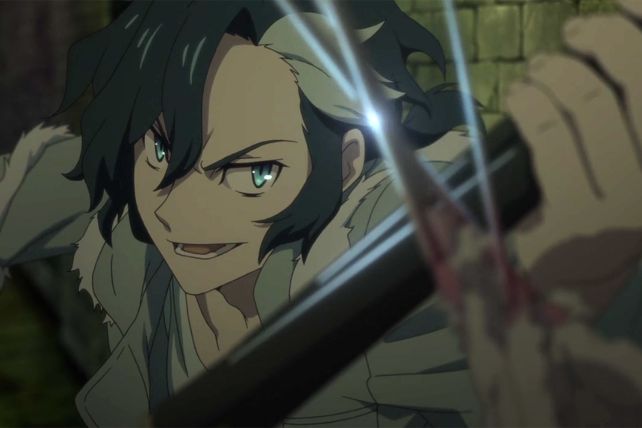 Set in 1930’s Japan, we follow The Jaegers, a group of Vampire Hunters who are sent to solve the growing issue plaguing society.

That issue being vampires with a never-ending thirst for blood which has led to numerous civilian causalities as a result.

If you love vampires this show is for you! 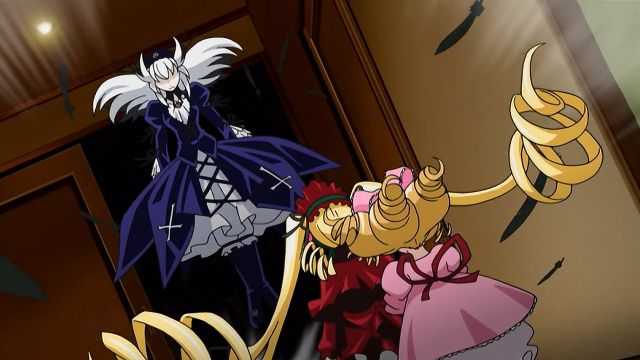 In this series we follow Jun, a shut in, who spends his days alone in his home buying things online and sending them back before the end of the trial period.

After a strange note shows up one day, Jun’s old life is thrown out the window as he is given a front row seat into the tale of the Rozen Maiden Doll Collection.

They’re a series of wind up dolls who fight one another for one purpose: the victor gets to become a real girl and meet their creator!

This series was also remade, so take you’re pick! 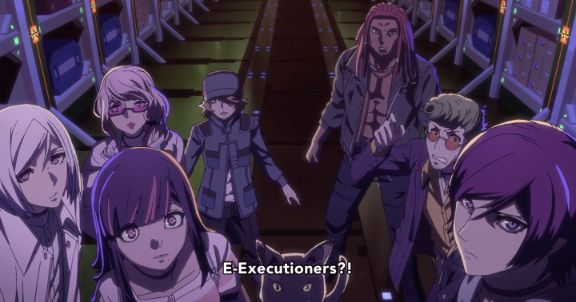 Kansai is a city bathed in neon and turmoil, with a dark underbelly full of high stakes criminals known as Akudama.

When one of the most dangerous Akudama known as Cutthroat is set to be executed, a rag tag group of individuals are all sent to free him.

This binds them all into a larger plan.

If you like violence, cyberpunk aesthetics and high-speed action, give this a go! 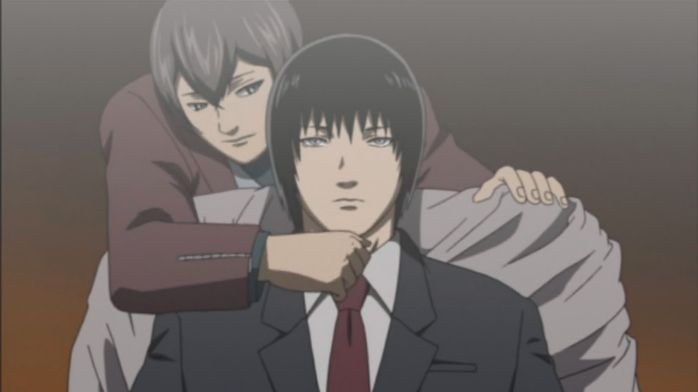 Taking place underground in a city known as Lux, which is falling apart due to lack of care, this series follows Ichise. He’s an orphan who has made a name for himself fighting.

After getting into an altercation with a fight promoter he loses an arm and a leg, and has them replaced with Texhnolyze. 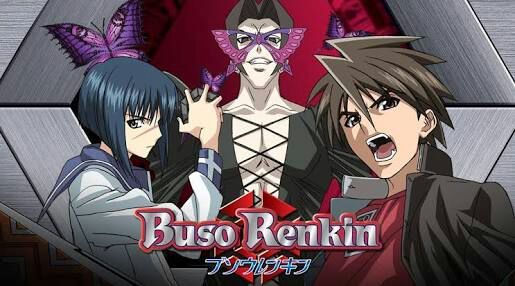 After Kazuki seemingly dies trying to save a strange girl from a monster, he wakes up in his dorm room again.

He thinks it was all a dream until a serpent like creature crashes into his dorm and attacks him and his sister.

The mysterious girl who he saved also says the creature is a homunculus, and that Kazuki died previously saving her, but was brought back to life. In this series from Studio Pierrot, children are told the tale of The Divine Gate that links our realm to the two spiritual realms, the Underworld and the Heavens.

The thing is however is that this gate is more than a story for kids. It exists and there is a special task force with divine powers that is tasked with guarding it and keeping it a secret from the public. 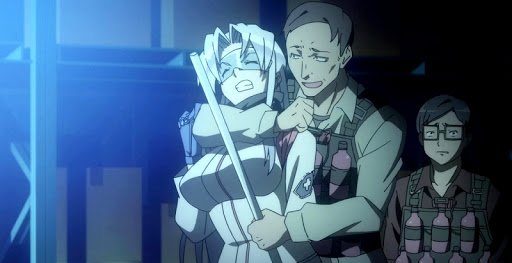 Taking place in the aftermath of a major terrorist attack, subtlety is thrown straight to the wind with this series.

Fan service is abundant as are the explosions and gratuitous violence and over the top shots. This is perfect for people looking for some ridiculous fun, or the Michael Bay fan in all of us.

If you don’t mind fan service and big guns, give this show a spin. 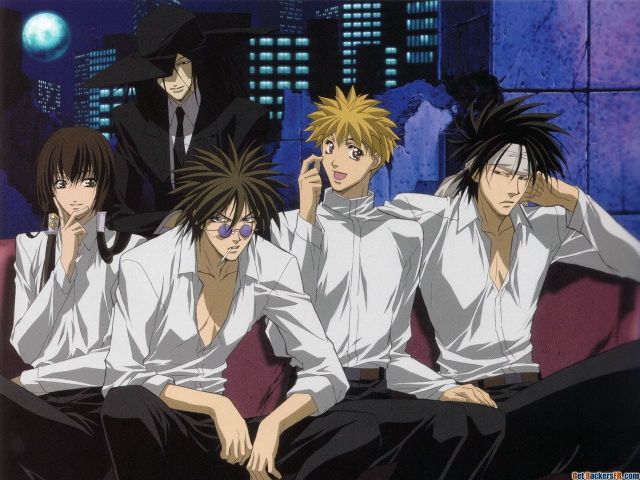 Lose something? Call Mido and Amani, who are known as Get Backers. They have a flawless record of retrieving and returning whatever their clients need.

In spite of the skills they possess they never seem to make any progress towards a better future and remain broke.

This often leads them to get in over their heads and tangle with dangerous people. 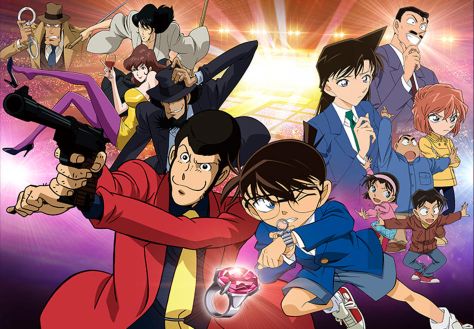 Ok, to be fair I’m cheating a little with this one since it’s special, but if you want a quick one-time funfest and like both shows, this could be a hidden gem. It’s worth taking the time to indulge in it.

Taking place in a country called Vesparand, a new resource that helps with stealth has been found, this of course attracts Lupin to take a peek.

Later during a trip to Japan, a member of the Vesperand elite switches places with Ran, which causes Ran as well as the rest of the Detective Conan main cast to head to Vesperand where chaos and fun takes place. 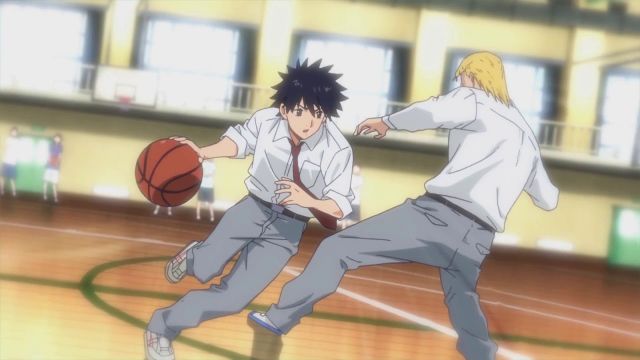 If you said yes to any or all of these criteria, I would like to introduce you to Sora, a basketball player with a small stature.

Similar to Hinata from Haikyuu, Sora’s large personality sets this show alight with an outstanding story.

The art is breathtaking, along with the tales of friendships and fights all on the high school hardwood.

Relevant: 21+ Sports Anime To Choose From That Aren’t Typical 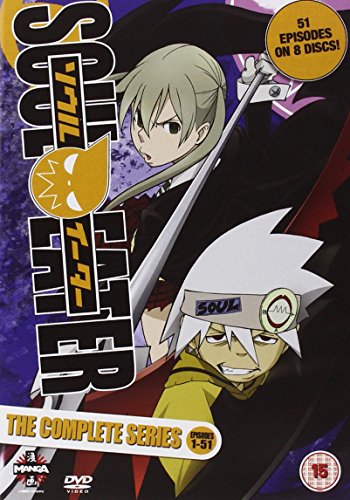 Soul Eater - The Complete Series [DVD] Start Shopping
We earn a commission from Amazon & other affiliates if you make a purchase at no additional cost to you.

Honestly if you haven’t seen it yet, please give it a look, it’s a blast, and the openings are top tier!

Death City is home to a special academy ran by the lord of death himself, the Grim Reaper.

What does this academy do?

They train to hunt witches, with one hunter wielding a weapon, who just so happens to be their other partner, or in some cases partners.

The only math this school does is counting how many witches they’ve killed.

if one weapon kills enough they become the weapon of the Grim Reaper himself a truly special honor to hold. 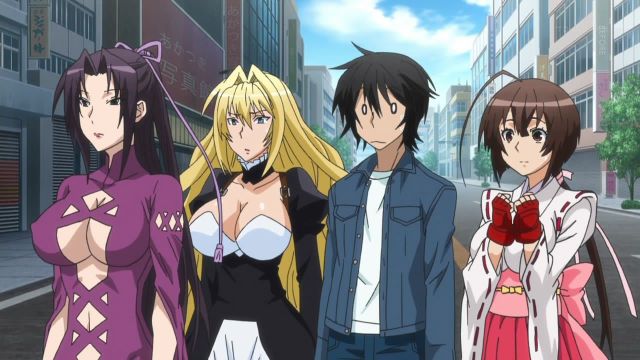 This event leads him to be outcasted by those around him, where he is soon sent on the ride of his life after a woman literally falls from the sky,.

Known as Musubi, she’s actually an alien, who awakens powers within our hero when she kisses him.

Together they are transported to Sekirei, where they battle in a contest known as Sekirei Plan.

Read: 19+ Of The Greatest Harem Anime Shows For Your Watchlist 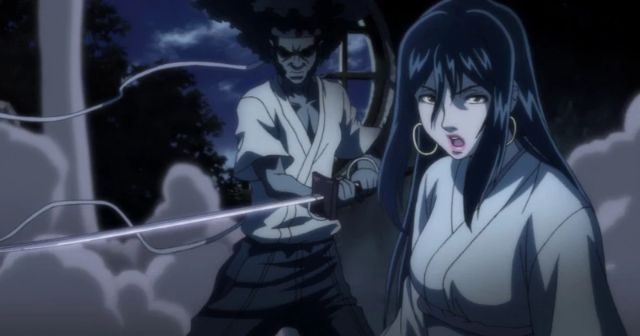 I’ve been hoping for a chance to mention this show.

What do you get if you take Takashi Okazaki, Samuel L. Jackson and animation from Gonzo?

You get this masterpiece, in which we follow Afro, a vengeful samurai on the hunt for the man who killed his father.

The only thing is, the entire world is out to kill Afro!

This show is action packed and heart pounding from start to finish and I honestly recommend it to anyone.

Even if you aren’t an fan, please watch this show.

Relevant: 6 Of The Most Badass Black Anime Characters Who Deserve Credit! 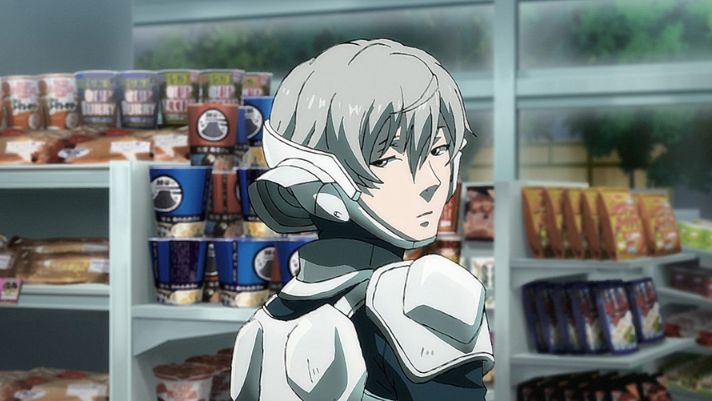 Every twelve years a dangerous tournament for elite combatants takes place. It’s called the Zodiac Tournament, with each combatant representing one of the 12 Zodiac signs.

The twelfth tournament begins in a ghost city, void of the civilians who used to roam and live in its bounds.

All the combatants have ingested killer gems, and with one wish on the line these fighters will do anything to win it all. 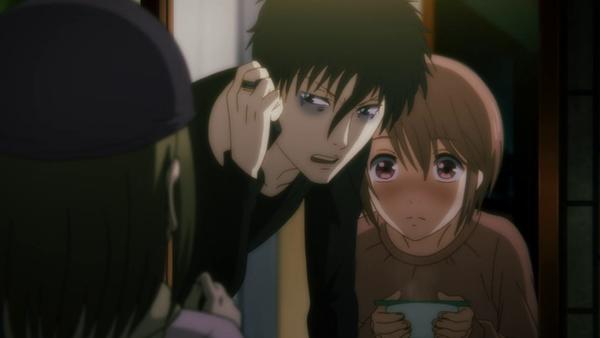 In a world where vampires exist among regular civilians, hidden away in the underbelly of society, life seems mostly normal.

These vampires don’t even require blood to survive from day to day, but they can get a little hungry when intense emotional moments like angry outbursts happen around them.

That’s how twenty-two year old Tsukasa learns of the existence of the vampires.

Her best friend reveals himself to be one of the many roaming the underbelly of the city, after a conflict with a human vampire hybrid named Anzai. 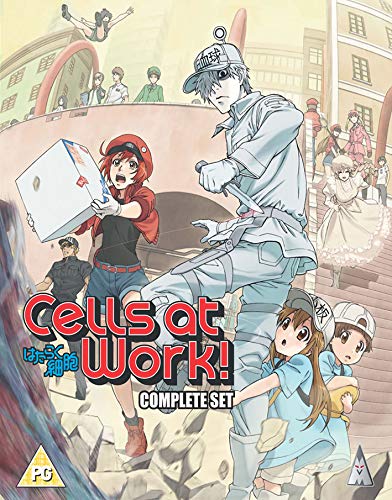 Cells At Work Collection BLU-RAY Shop with Amazon
We earn a commission from Amazon & other affiliates if you make a purchase at no additional cost to you.

Remember Osmosis Jones? This series has a similar concept behind it.

They go about their daily tasks within the human body, eliminating invaders, delivering oxygen and working on projects with other workers. 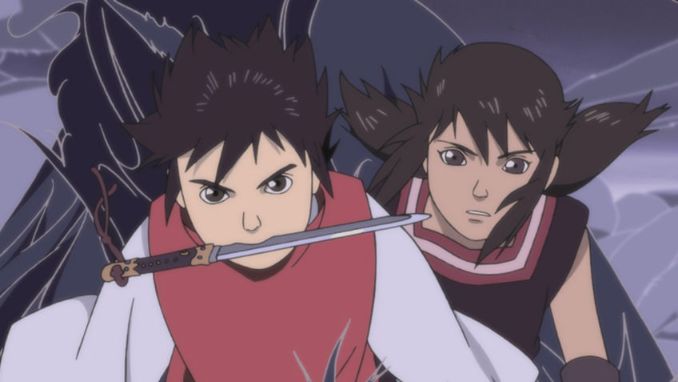 This isn’t a series (an movie), but it’s got something special behind it and I think it deserves more love.

After travelling back in time over 1200 years to the Helan period in Japan, one young boy finds himself in Kyoto where he’s caught in the middle of a vicious battle between humans and demons 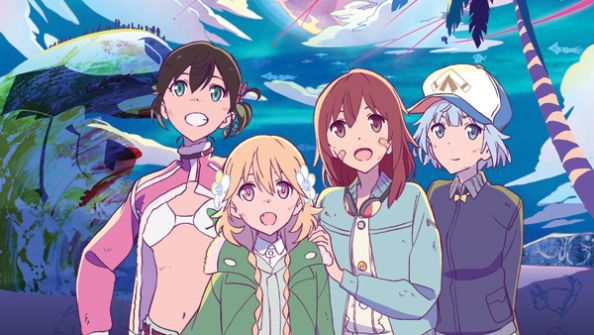 In a future where Japan has fallen apart, and no single government controls it, we follow Nozomi who wants to help her gang leader friend from childhood maintain the power and control that she holds.

After her friend is injured, Nozomi sets out across Japan on her motorcycle where she meets a colorful cast of characters.

Imagine a world where one side is like our own, but the other is dangerous and inhabited by dragons and other creatures. And with the potential of these dragons invading the normal world.

There is a special task force of witches and wizards that is sent to stop them.

In this fun one-shot series, we follow our two main characters Ninny and Noel as they attempt to stop dragons from attacking London. 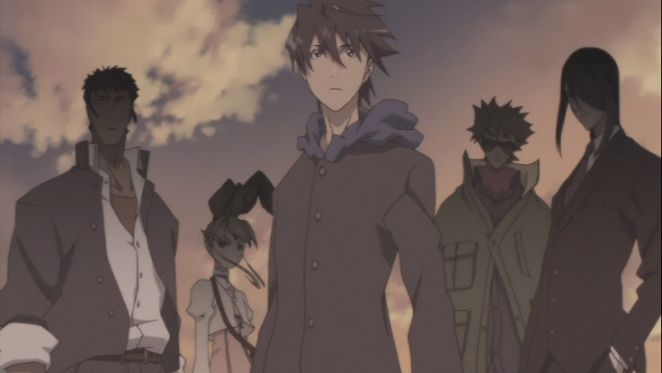 When a new transfer student makes an appearance at Magami Academy in Shinjuku, he quickly befriends the class delinquent.

This is the story of Tatsuma Hiyuu and how he and his parade of school friends venture into a struggle against the Dark Arts, one of the greatest threats Tokyo has ever seen. 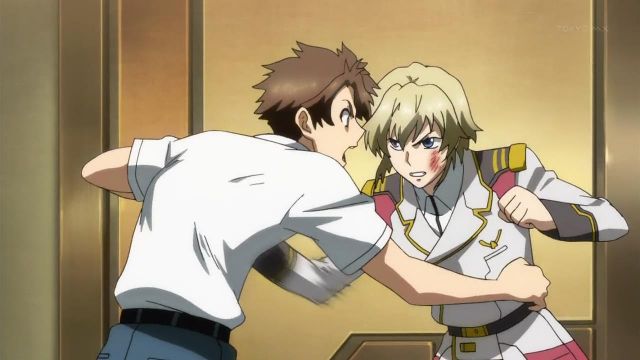 When Aoba, a normal high-school student is targeted by a giant robot, he’s suddenly saved by his strange classmate Hina.

She claims her and the robot that attacked him are both from the future. She also claims they both must travel into the future to save Aoba’s own life.

After they arrive he is caught in a conflict to save the world from destruction.

If you love giant mecha or Pacific Rim, give this series a look!