Air is a 2005 romance/drama series produced by Kyoto Animation. And is considered a great romance by some in the community.

Whether you’re a fan and want some official quotes to remember the anime. Or you’re looking for anime quotes in general, this post will do the trick.

Here are the best lines from Air.

Both from the anime and visual novel. 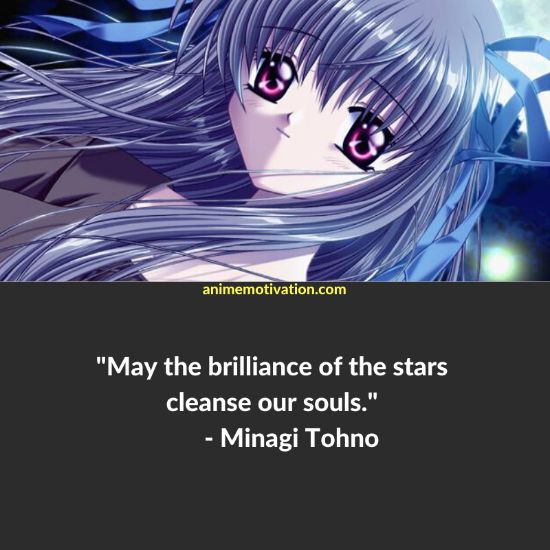 “May the brilliance of the stars cleanse our souls.” – Minagi Tohno 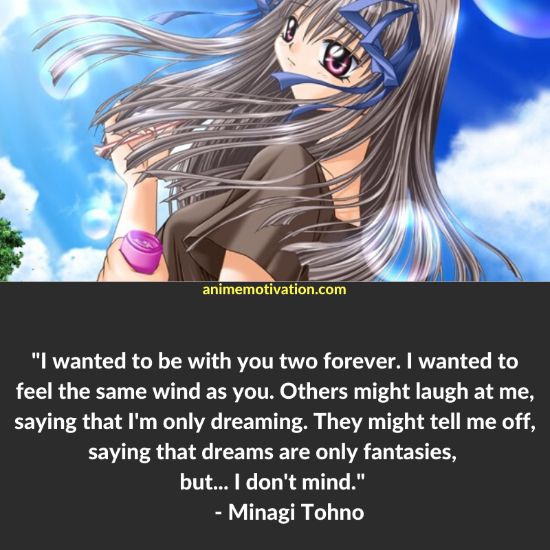 “I wanted to be with you two forever. I wanted to feel the same wind as you. Others might laugh at me, saying that I’m only dreaming. They might tell me off, saying that dreams are only fantasies, but… I don’t mind.” – Minagi Tohno 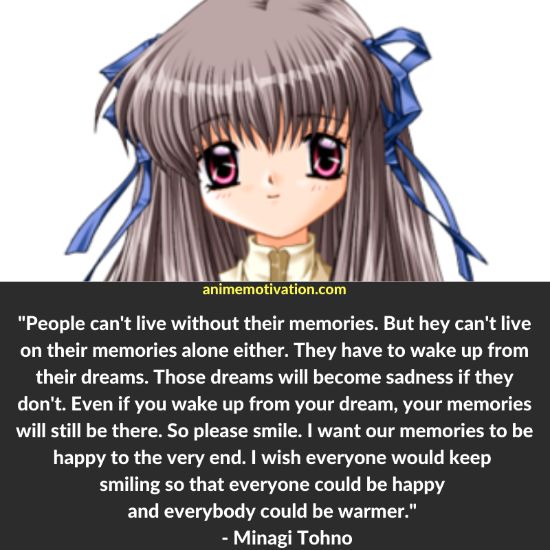 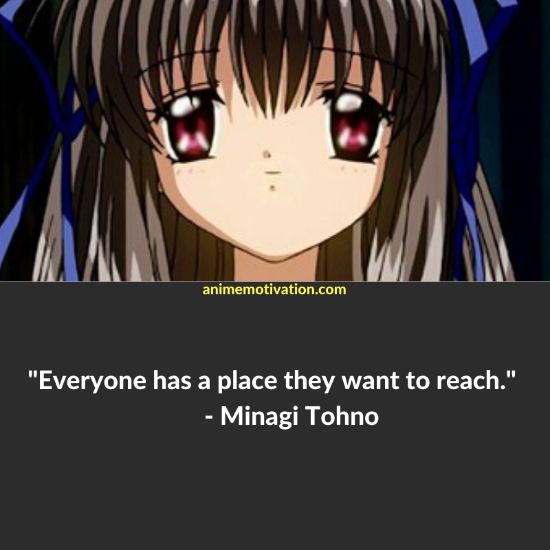 “Everyone has a place they want to reach.” – Minagi Tohno 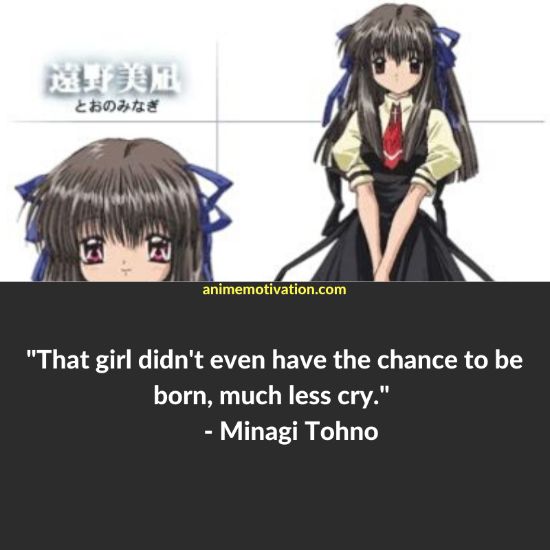 “That girl didn’t even have the chance to be born, much less cry.” – Minagi Tohno 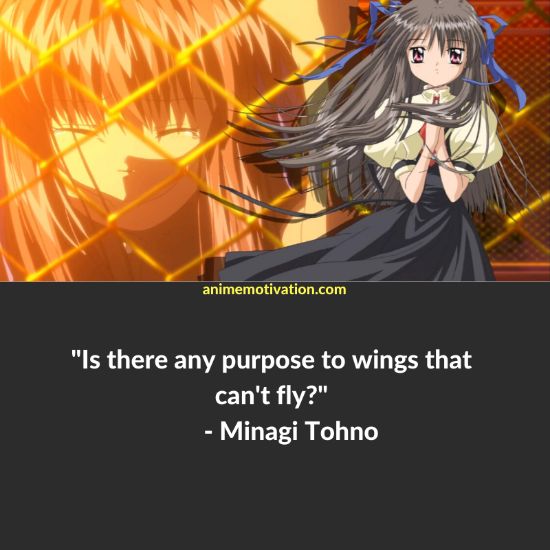 “Is there any purpose to wings that can’t fly?” – Minagi Tohno 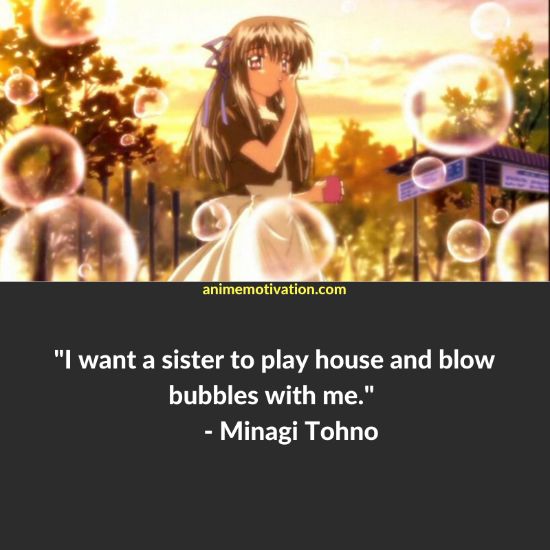 “I want a sister to play house and blow bubbles with me.” – Minagi Tohno 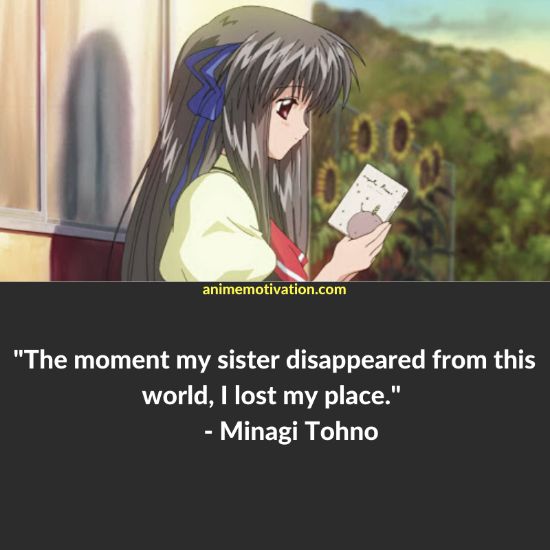 “The moment my sister disappeared from this world, I lost my place.” – Minagi Tohno 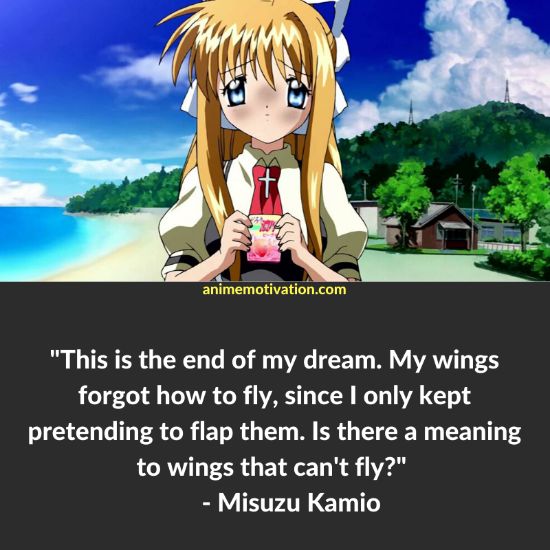 “This is the end of my dream. My wings forgot how to fly, since I only kept pretending to flap them. Is there a meaning to wings that can’t fly?” – Misuzu Kamio 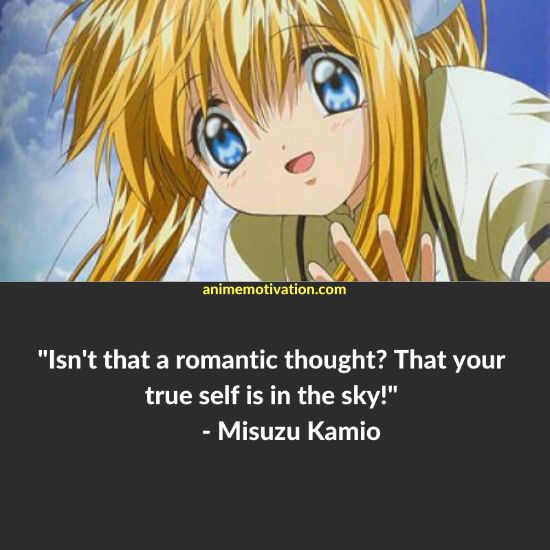 “Isn’t that a romantic thought? That your true self is in the sky!” – Misuzu Kamio 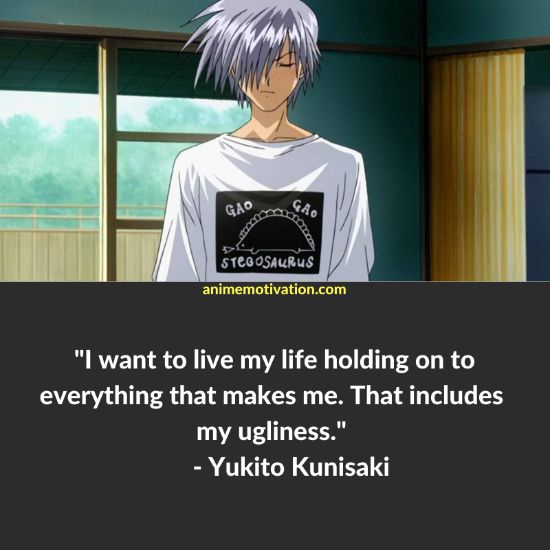 “I want to live my life holding on to everything that makes me. That includes my ugliness.” – Yukito Kunisaki 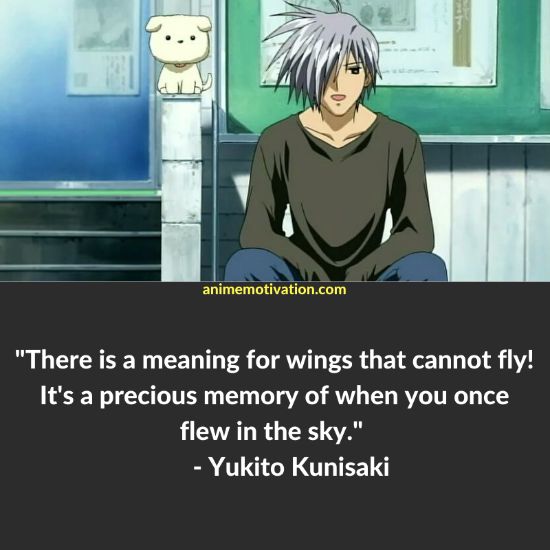 “There is a meaning for wings that cannot fly! It’s a precious memory of when you once flew in the sky.” – Yukito Kunisaki 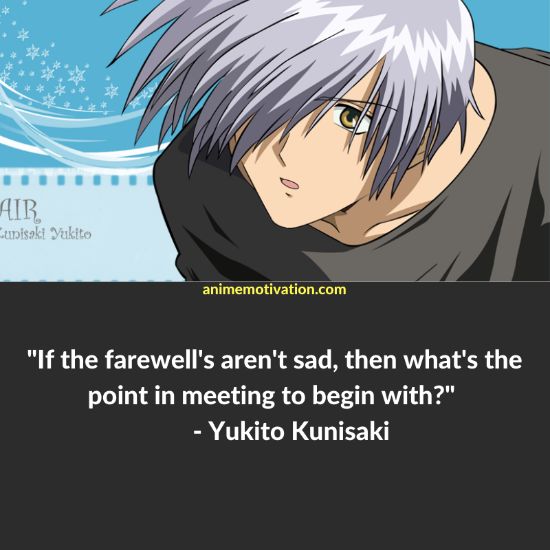 “If the farewell’s aren’t sad, then what’s the point in meeting to begin with?” – Yukito Kunisaki 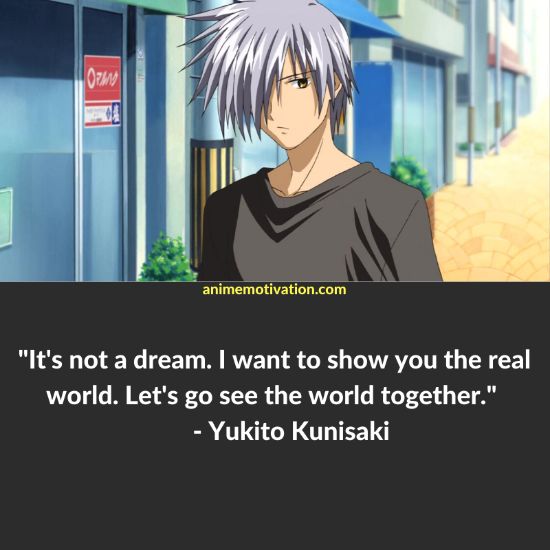 “It’s not a dream. I want to show you the real world. Let’s go see the world together.” – Yukito Kunisaki 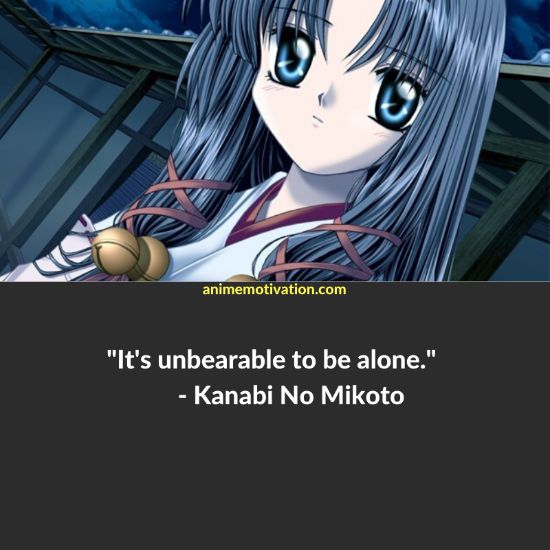 “It’s unbearable to be alone.” – Kannabi No Mikoto 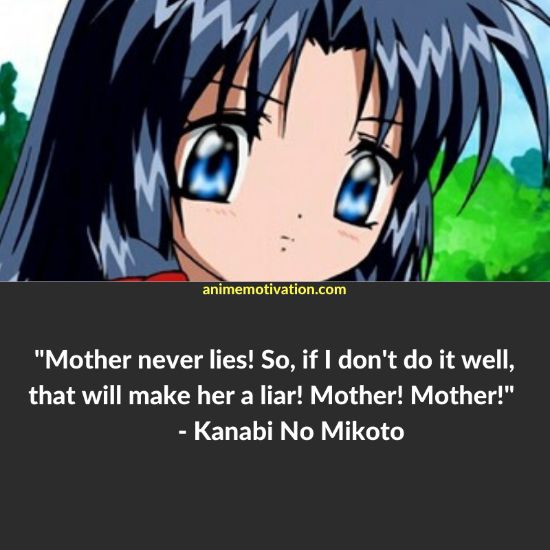 “Mother never lies! So, if I don’t do it well, that will make her a liar! Mother! Mother!” – Kannabi No Mikoto 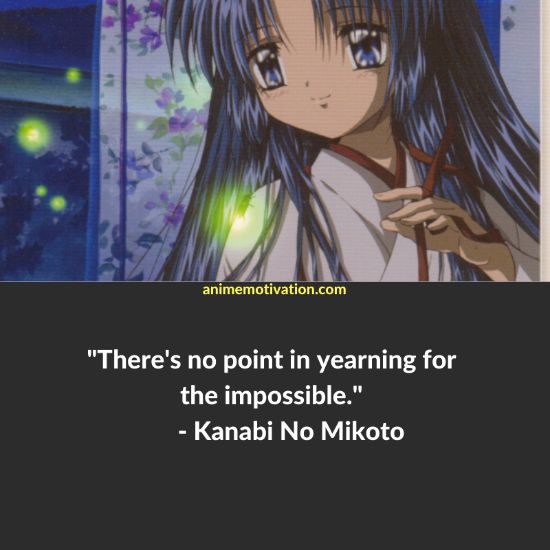 “There’s no point in yearning for the impossible.” – Kannabi No Mikoto 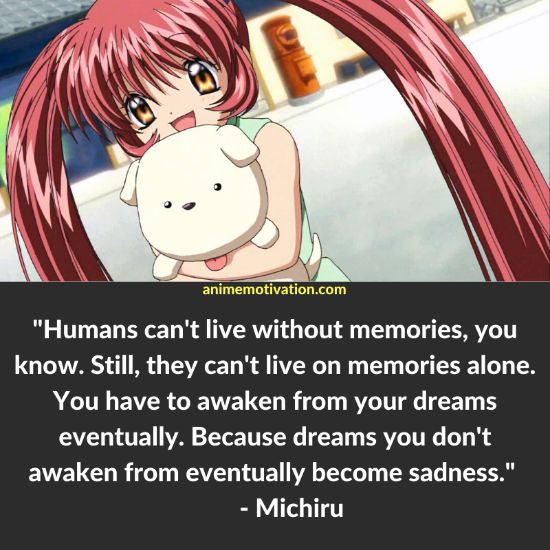 “Humans can’t live without memories, you know. Still, they can’t live on memories alone. You have to awaken from your dreams eventually. Because dreams you don’t awaken from eventually become sadness.” – Michiru 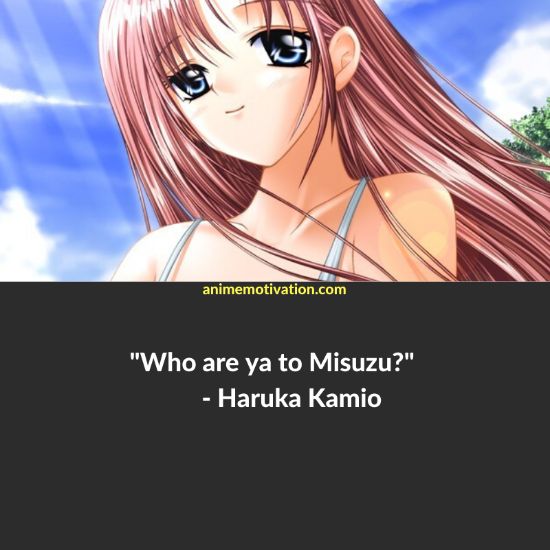 “Who are ya to Misuzu?” – Haruka Kamio 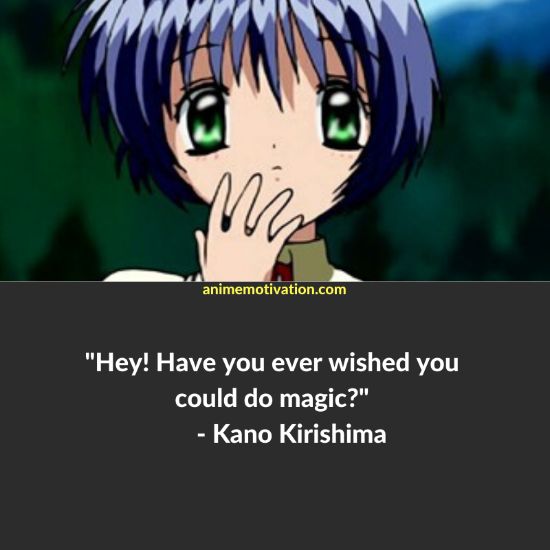 “Hey! Have you ever wished you could do magic?” – Kano Kirishima

21 Of The Best Quotes From Kanon

15+ Of The Greatest Chuunibyou Quotes Worth Sharing