Zangetsu is Ichigo’s inner spirit, or more accurately his Zanpakuto (sword). He’s been there since the beginning and frequently talks with Ichigo in some of his darkest, most depressing moments. Or moments of clarity.

As a character, Zangetsu is straight talking but never angry, aggressive, or energetic in his responses. He likes to get straight to the point and never goes off track or gets distracted from what he needs to say.

The “other” Zangetsu, Ichigo’s hollow, is more sinister, savage, sadistic, and won’t tolerate any sort of disrespect. Let alone allowing its master to be weak without consequences. 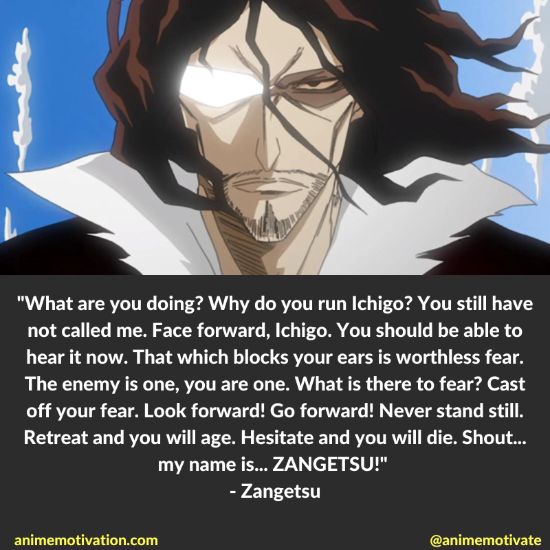 “What are you doing? Why do you run Ichigo? You still have not called me. Face forward, Ichigo. You should be able to hear it now. That which blocks your ears is worthless fear. The enemy is one, you are one. What is there to fear? Cast off your fear. Look forward! Go forward! Never stand still. Retreat and you will age. Hesitate and you will die. Shout… my name is… ZANGETSU!” – Zangetsu 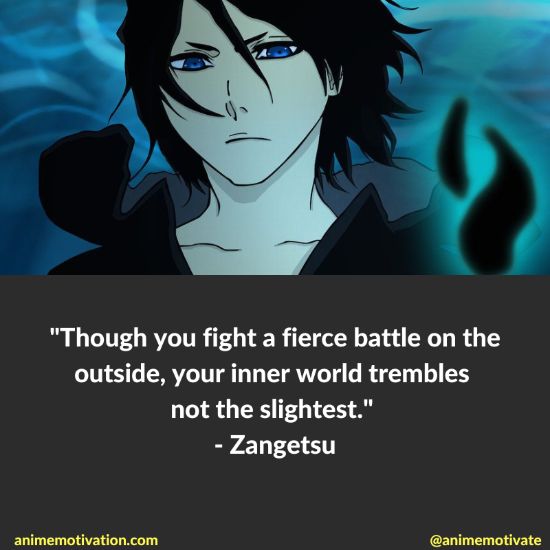 “Though you fight a fierce battle on the outside, your inner world trembles not the slightest.” – Zangetsu 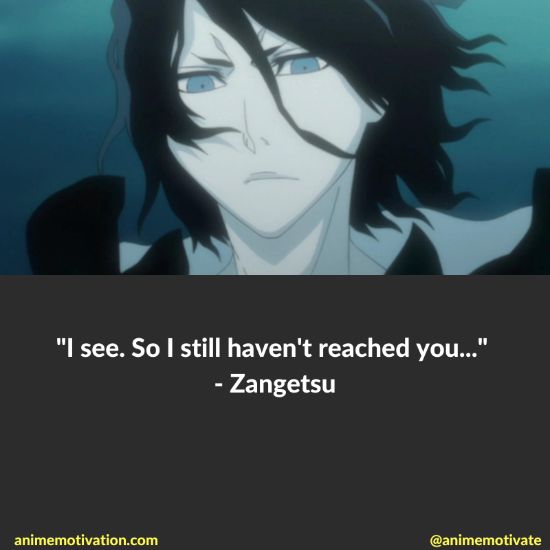 “I see. So I still haven’t reached you…” – Zangetsu 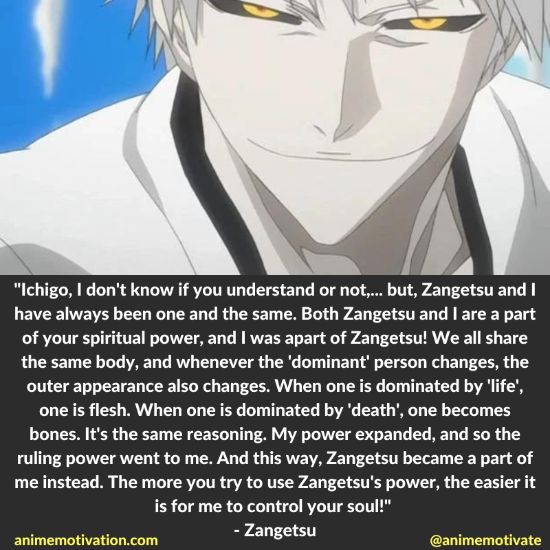 “Ichigo, I don’t know if you understand or not,… but, Zangetsu and I have always been one and the same. Both Zangetsu and I are a part of your spiritual power, and I was apart of Zangetsu! We all share the same body, and whenever the ‘dominant’ person changes, the outer appearance also changes. When one is dominated by ‘life’, one is flesh. When one is dominated by ‘death’, one becomes bones. It’s the same reasoning. My power expanded, and so the ruling power went to me. And this way, Zangetsu became a part of me instead. The more you try to use Zangetsu’s power, the easier it is for me to control your soul!” – Zangetsu 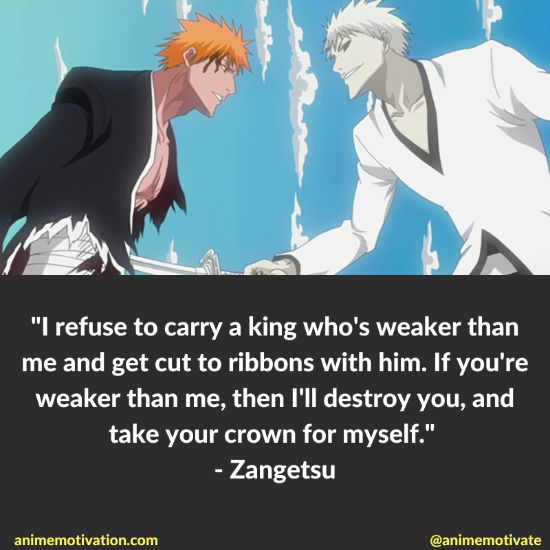 “I refuse to carry a king who’s weaker than me and get cut to ribbons with him. If you’re weaker than me, then I’ll destroy you, and take your crown for myself.” – Zangetsu 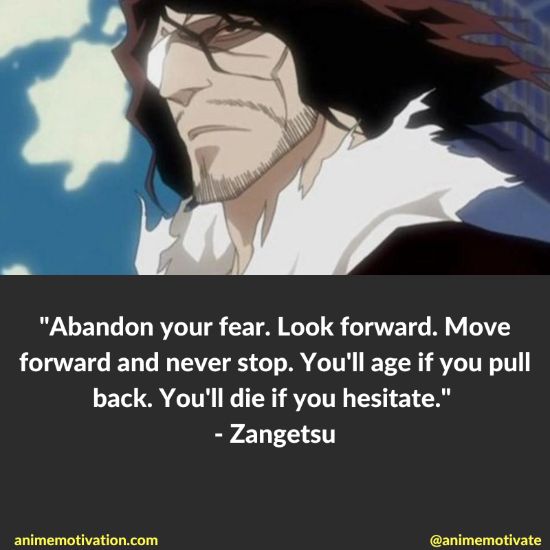 “Abandon your fear. Look forward. Move forward and never stop. You’ll age if you pull back. You’ll die if you hesitate.” – Zangetsu 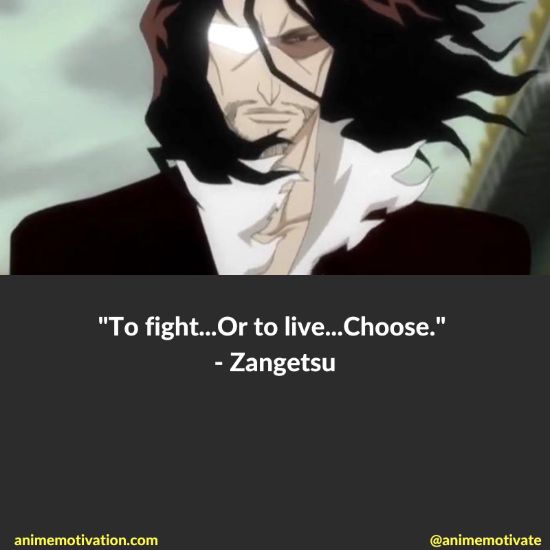 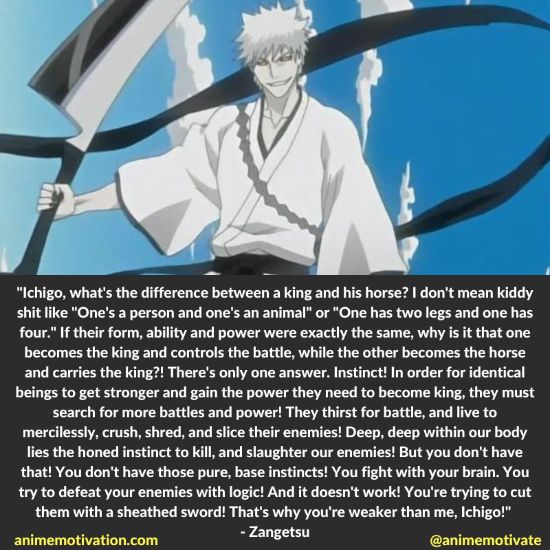 “Ichigo, what’s the difference between a king and his horse? I don’t mean kiddy shit like “One’s a person and one’s an animal” or “One has two legs and one has four.” If their form, ability and power were exactly the same, why is it that one becomes the king and controls the battle, while the other becomes the horse and carries the king?! There’s only one answer. Instinct! In order for identical beings to get stronger and gain the power they need to become king, they must search for more battles and power! They thirst for battle, and live to mercilessly, crush, shred, and slice their enemies! Deep, deep within our body lies the honed instinct to kill, and slaughter our enemies! But you don’t have that! You don’t have those pure, base instincts! You fight with your brain. You try to defeat your enemies with logic! And it doesn’t work! You’re trying to cut them with a sheathed sword! That’s why you’re weaker than me, Ichigo!” – Zangetsu 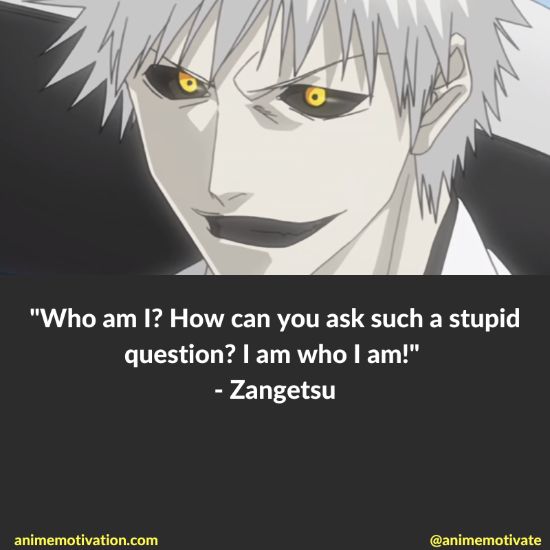 “Who am I? How can you ask such a stupid question? I am who I am!” – Zangetsu 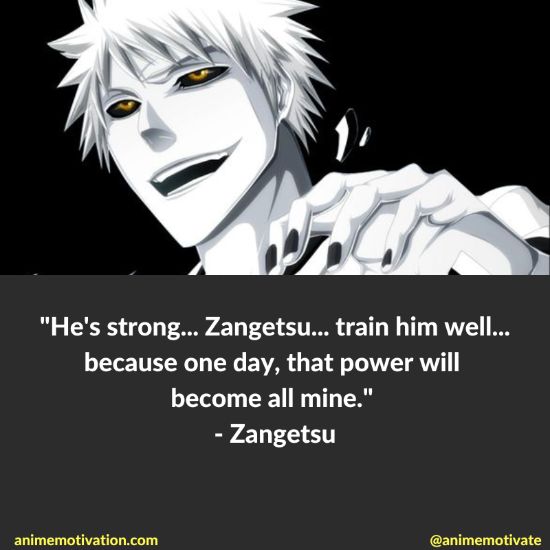 “He’s strong… Zangetsu… train him well… because one day, that power will become all mine.” – Zangetsu 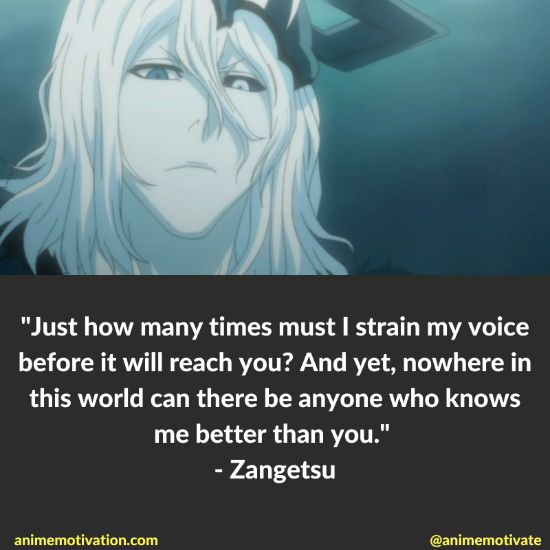 “Just how many times must I strain my voice before it will reach you? And yet, nowhere in this world can there be anyone who knows me better than you.” – Zangetsu 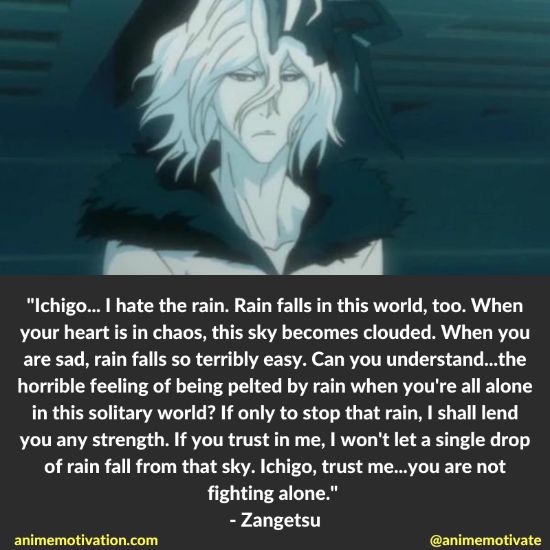 “Ichigo… I hate the rain. Rain falls in this world, too. When your heart is in chaos, this sky becomes clouded. When you are sad, rain falls so terribly easy. Can you understand…the horrible feeling of being pelted by rain when you’re all alone in this solitary world? If only to stop that rain, I shall lend you any strength. If you trust in me, I won’t let a single drop of rain fall from that sky. Ichigo, trust me…you are not fighting alone.” – Zangetsu

Anime Wall Art & Posters on Sale Shop for Anime Wall Art
We earn a commission from Amazon & other affiliates if you make a purchase at no additional cost to you.