Planetarian is an series about Hoshino Yumemi, a robot who’s always smiling and cheerful.

She meets a man who accidentally turns her on (no pun intended) and that’s how the starts.

This is a surprisingly warm, and even dramatic with feels, meaningful quotes, and touching moments.

This post will touch on these moments captured in quotes from the ‘s main characters. 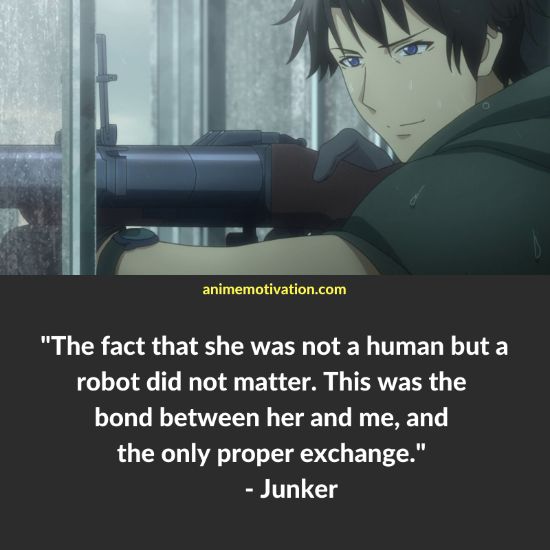 “The fact that she was not a human but a robot did not matter. This was the bond between her and me, and the only proper exchange.” – Junker 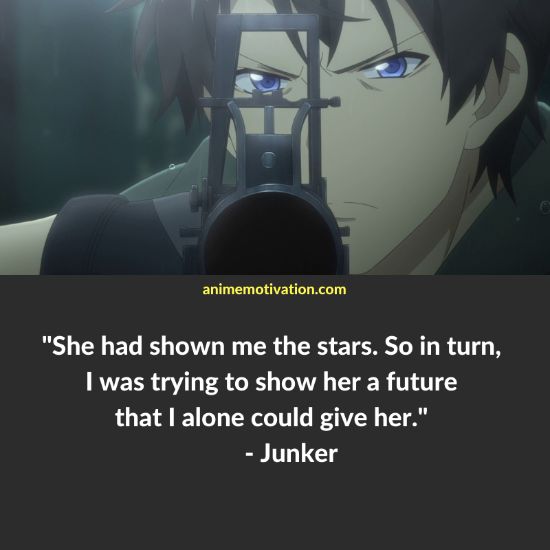 “She had shown me the stars. So in turn, I was trying to show her a future that I alone could give her.” – Junker “The starry sky now belongs to you. That was the message she was conveying with child-like innocence to every single person born on this planet.” – Junker 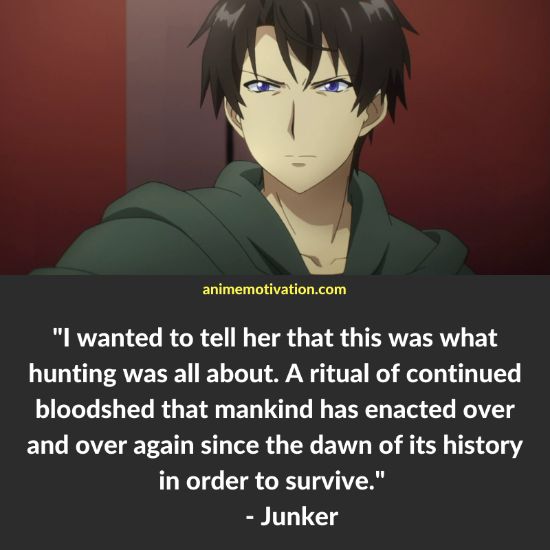 “I wanted to tell her that this was what hunting was all about. A ritual of continued bloodshed that mankind has enacted over and over again since the dawn of its history in order to survive.” – Junker 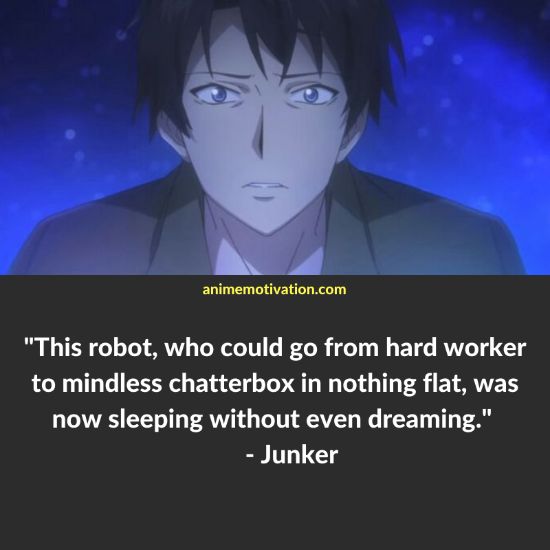 “This robot, who could go from hard worker to mindless chatterbox in nothing flat, was now sleeping without even dreaming.” – Junker 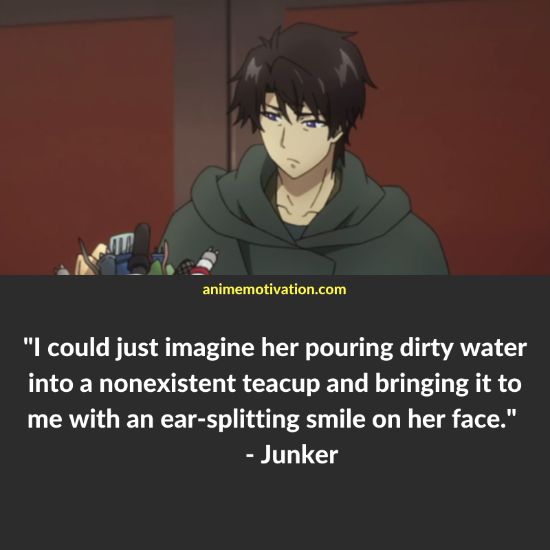 “I could just imagine her pouring dirty water into a nonexistent teacup and bringing it to me with an ear-splitting smile on her face.” – Junker 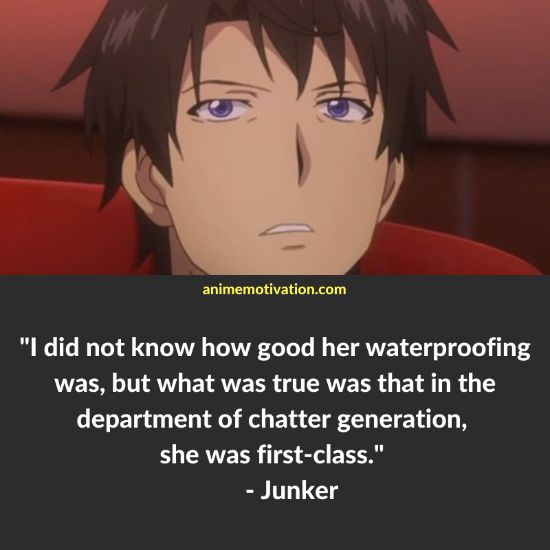 “I did not know how good her waterproofing was, but what was true was that in the department of chatter generation, she was first-class.” – Junker 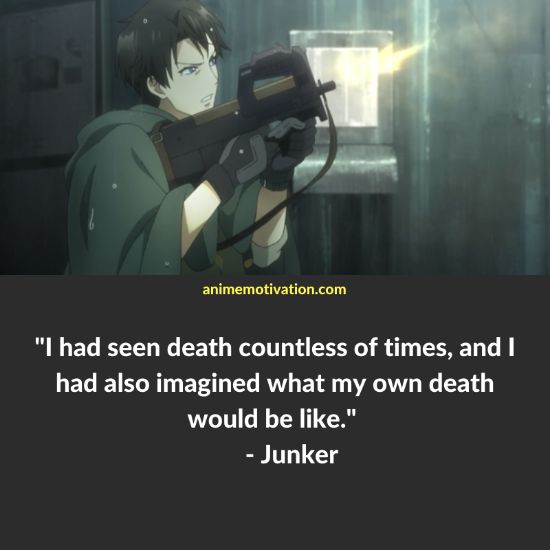 “I had seen death countless of times, and I had also imagined what my own death would be like.” – Junker 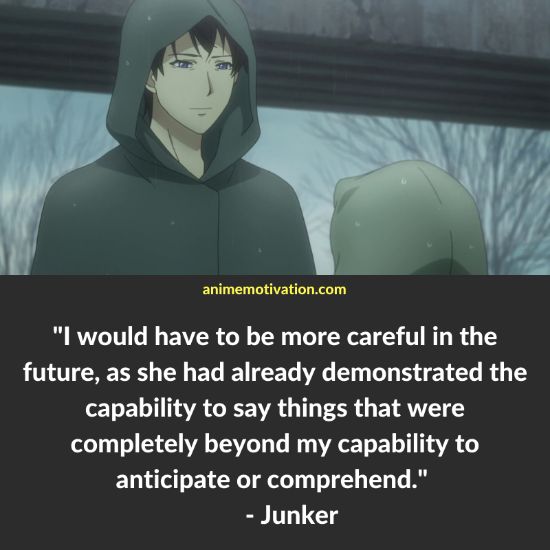 “I would have to be more careful in the future, as she had already demonstrated the capability to say things that were completely beyond my capability to anticipate or comprehend.” – Junker 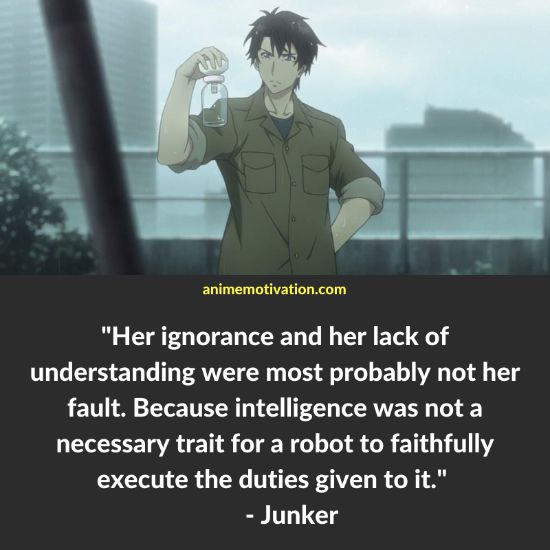 “Her ignorance and her lack of understanding were most probably not her fault. Because intelligence was not a necessary trait for a robot to faithfully execute the duties given to it.” – Junker 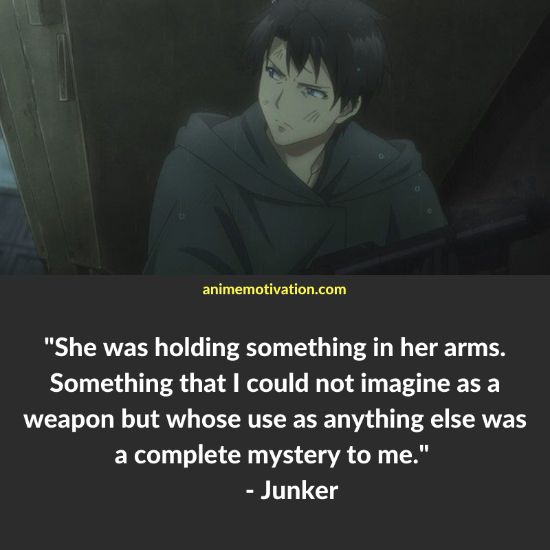 “She was holding something in her arms. Something that I could not imagine as a weapon but whose use as anything else was a complete mystery to me.” – Junker 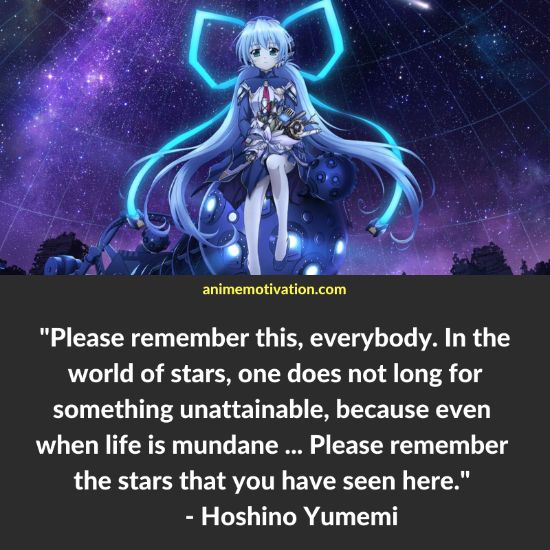 “Please remember this, everybody. In the world of stars, one does not long for something unattainable, because even when life is mundane … Please remember the stars that you have seen here.” – Hoshino Yumemi 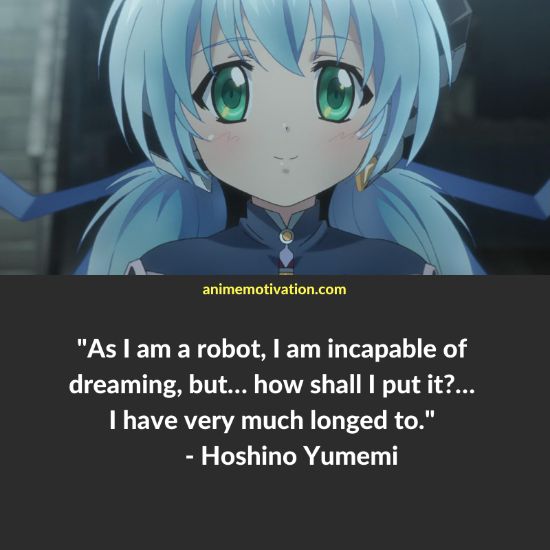 “As I am a robot, I am incapable of dreaming, but… how shall I put it?… I have very much longed to.” – Hoshino Yumemi 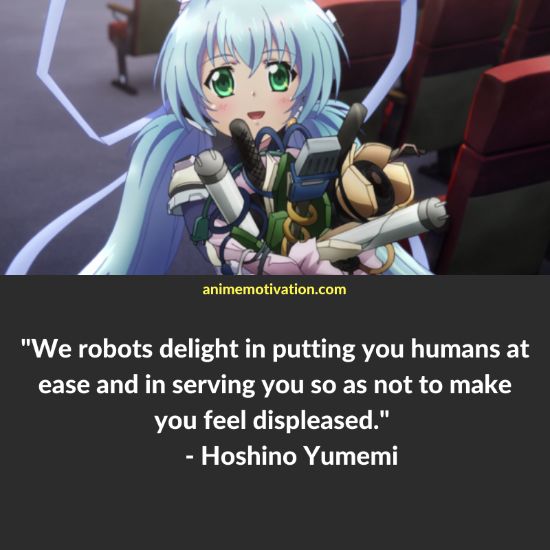 “We robots delight in putting you humans at ease and in serving you so as not to make you feel displeased.” – Hoshino Yumemi 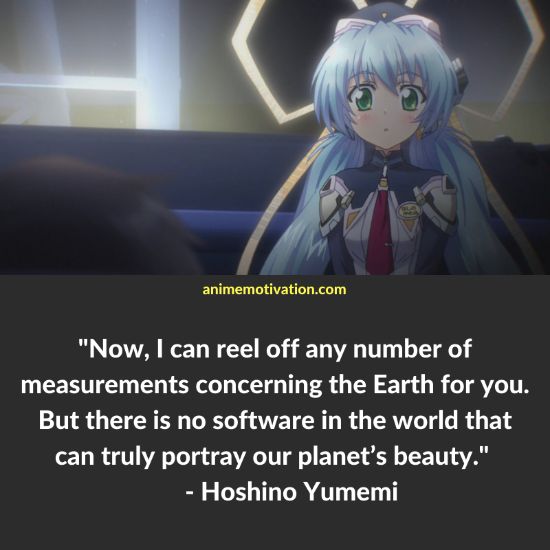 “Now, I can reel off any number of measurements concerning the Earth for you. But there is no software in the world that can truly portray our planet’s beauty.” – Hoshino Yumemi 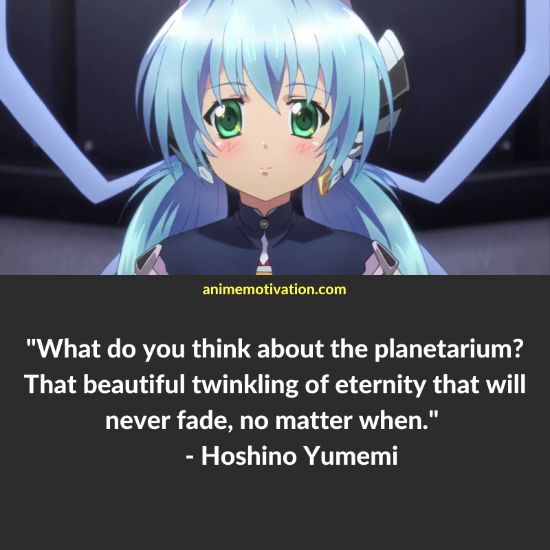 “What do you think about the planetarium? That beautiful twinkling of eternity that will never fade, no matter when.” – Hoshino Yumemi 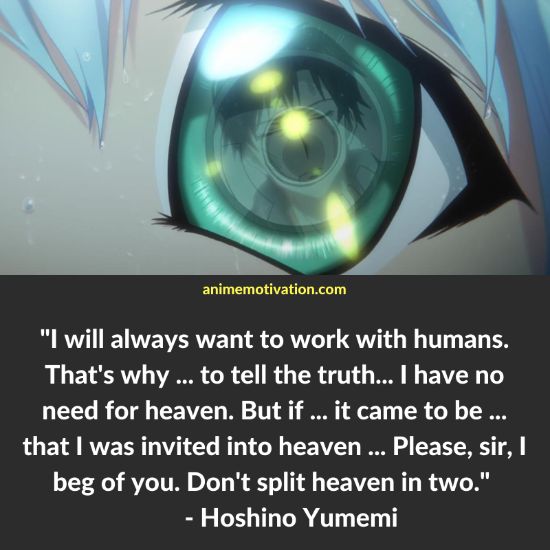 “I will always want to work with humans. That’s why … to tell the truth… I have no need for heaven. But if … it came to be … that I was invited into heaven … Please, sir, I beg of you. Don’t split heaven in two.” – Hoshino Yumemi 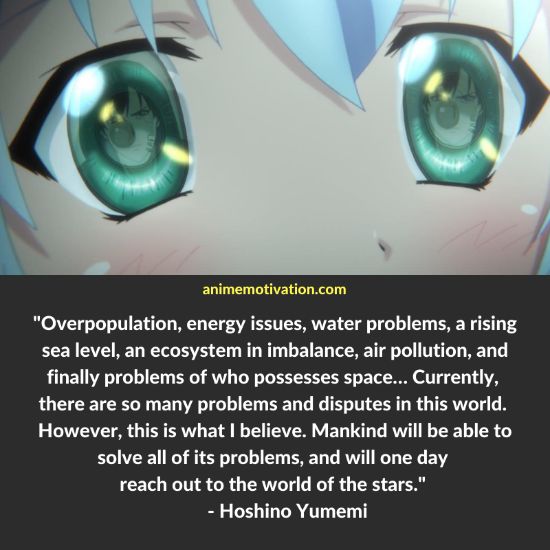 “Overpopulation, energy issues, water problems, a rising sea level, an ecosystem in imbalance, air pollution, and finally problems of who possesses space… Currently, there are so many problems and disputes in this world. However, this is what I believe. Mankind will be able to solve all of its problems, and will one day reach out to the world of the stars.” – Hoshino Yumemi 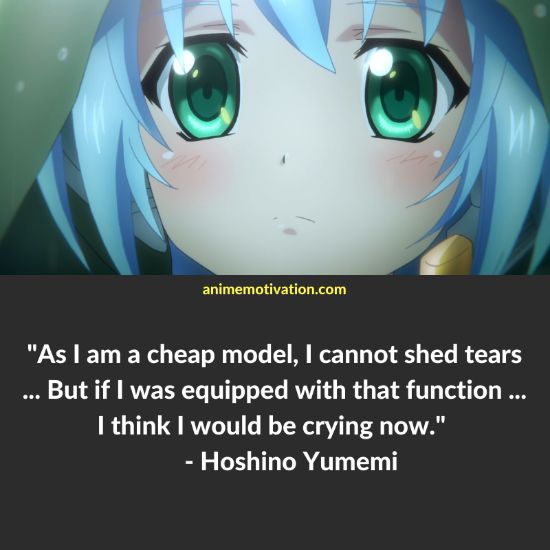 “As I am a cheap model, I cannot shed tears … But if I was equipped with that function … I think I would be crying now.” – Hoshino Yumemi 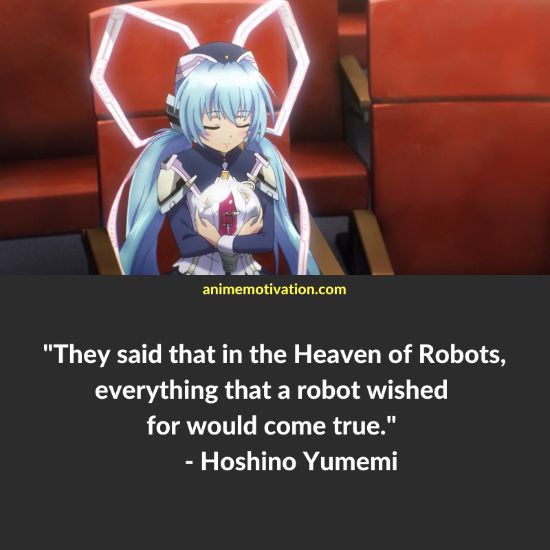 “They said that in the Heaven of Robots, everything that a robot wished for would come true.” – Hoshino Yumemi 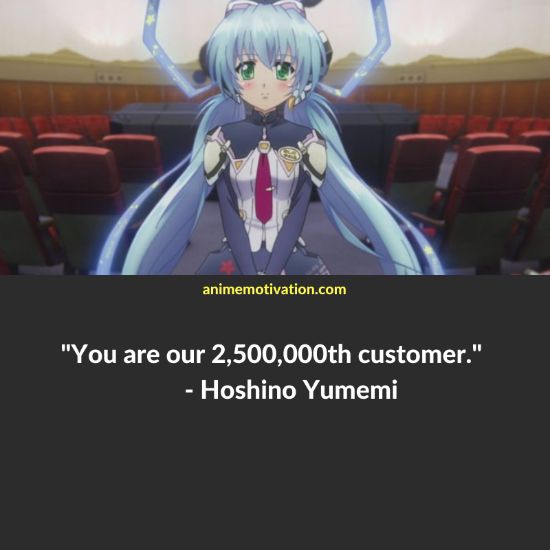 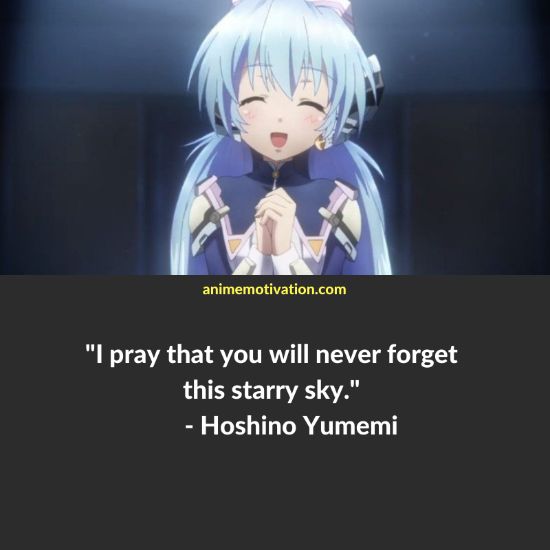 “I pray that you will never forget this starry sky.” – Hoshino Yumemi 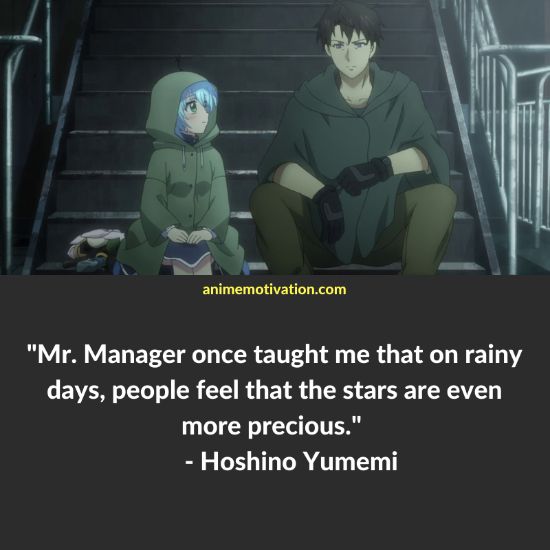 “Mr. Manager once taught me that on rainy days, people feel that the stars are even more precious.” – Hoshino Yumemi