Nanbaka is an series about prison in a nutshell. And characters in particular who are good at escaping from it.

With that theme the draws on real experiences, and the quotes reflect this.

Many quotes are relatable, deep, thought provoking and realistic. 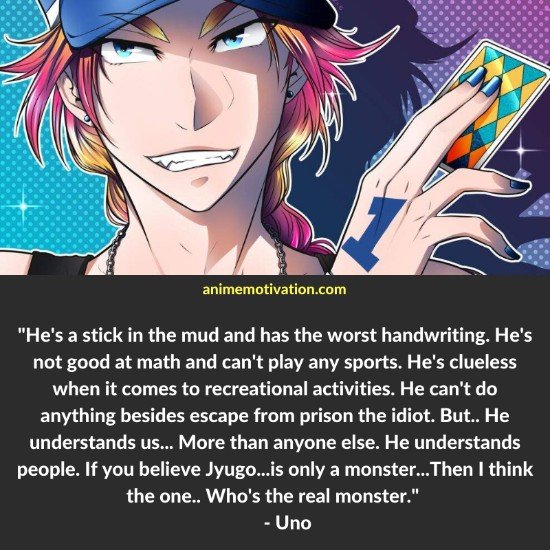 “He’s a stick in the mud and has the worst handwriting. He’s not good at math and can’t play any sports. He’s clueless when it comes to recreational activities. He can’t do anything besides escape from prison the idiot. But.. He understands us… More than anyone else. He understands people. If you believe Jyugo…is only a monster…Then I think the one.. Who’s the real monster.” – Uno 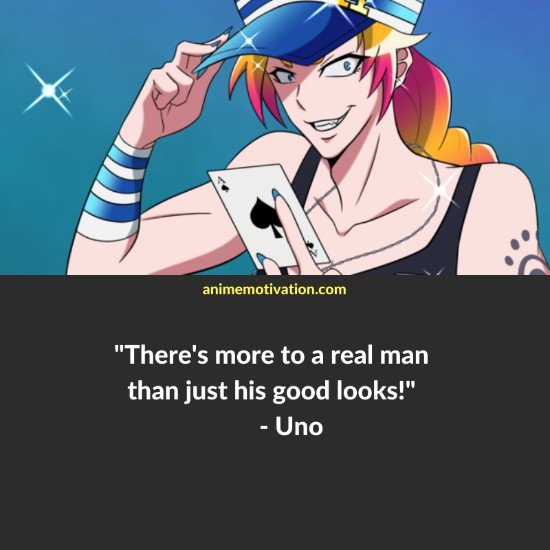 “There’s more to a real man than just his good looks!” – Uno 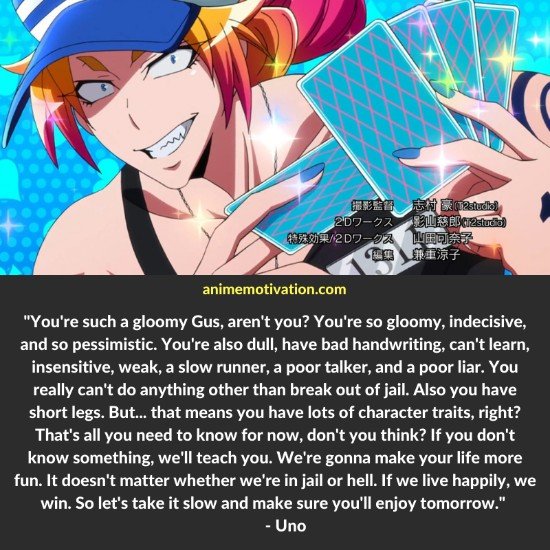 “You’re such a gloomy Gus, aren’t you? You’re so gloomy, indecisive, and so pessimistic. You’re also dull, have bad handwriting, can’t learn, insensitive, weak, a slow runner, a poor talker, and a poor liar. You really can’t do anything other than break out of jail. Also you have short legs. But… that means you have lots of character traits, right? That’s all you need to know for now, don’t you think? If you don’t know something, we’ll teach you. We’re gonna make your life more fun. It doesn’t matter whether we’re in jail or hell. If we live happily, we win. So let’s take it slow and make sure you’ll enjoy tomorrow.” – Uno “I’ve searched tirelessly in every prison I’ve been sent to. I’ve looked and looked and kept on looking – these damn black shackles which seem to constrain my very freedom, only he can remove. I’ve come this far neither of us has anywhere left to run. In Nanba Prison, this is the end of the line.” – Jyugo 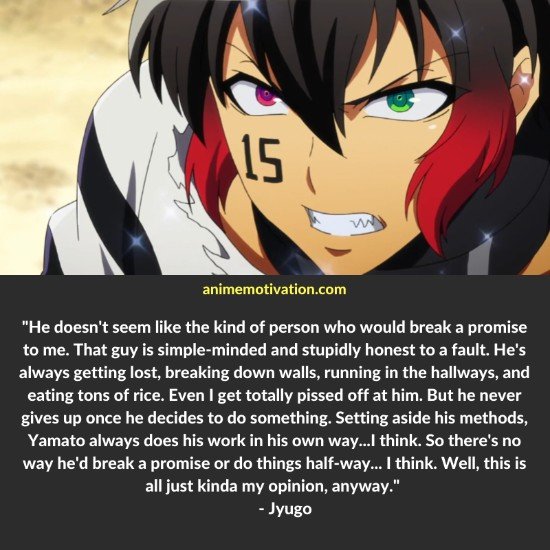 “He doesn’t seem like the kind of person who would break a promise to me. That guy is simple-minded and stupidly honest to a fault. He’s always getting lost, breaking down walls, running in the hallways, and eating tons of rice. Even I get totally pissed off at him. But he never gives up once he decides to do something. Setting aside his methods, Yamato always does his work in his own way…I think. So there’s no way he’d break a promise or do things half-way… I think. Well, this is all just kinda my opinion, anyway.” – Jyugo 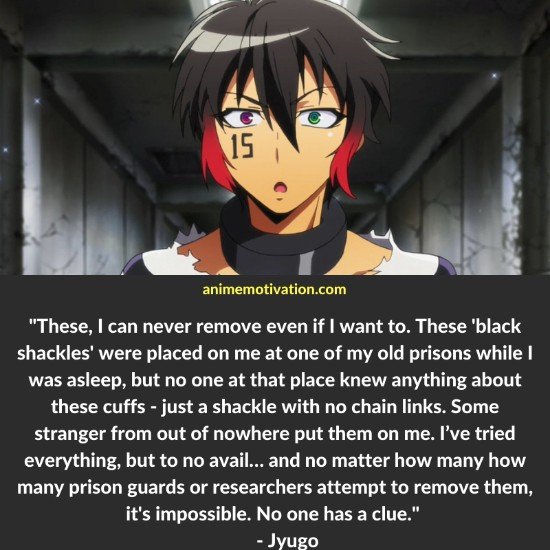 “These, I can never remove even if I want to. These ‘black shackles’ were placed on me at one of my old prisons while I was asleep, but no one at that place knew anything about these cuffs – just a shackle with no chain links. Some stranger from out of nowhere put them on me. I’ve tried everything, but to no avail… and no matter how many how many prison guards or researchers attempt to remove them, its impossible. No one has a clue.” – Jyugo 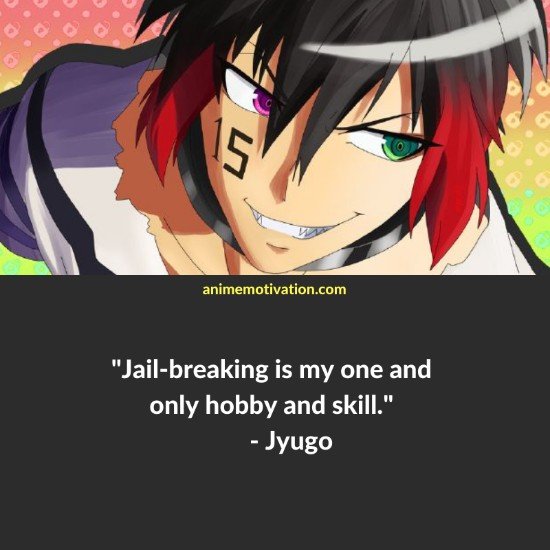 “Jail-breaking is my one and only hobby and skill.” – Jyugo 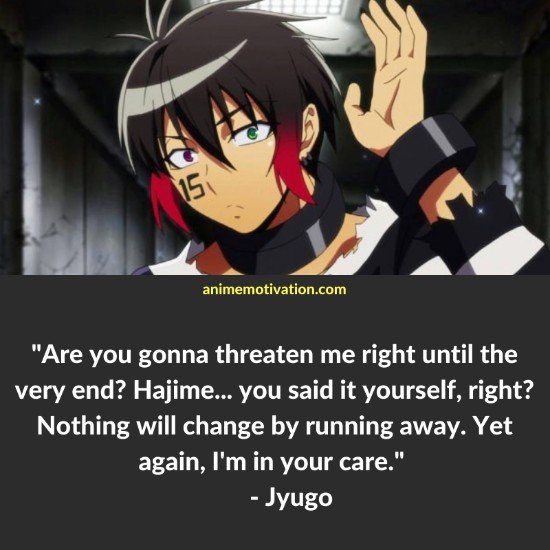 “Are you gonna threaten me right until the very end? Hajime… you said it yourself, right? Nothing will change by running away. Yet again, I’m in your care.” – Jyugo “Then go get her like you’re supposed to today. That’s what you call ‘taking responsibility’, right? Whether she hates you or not, you’re still her dad. I haven’t got any fond memories of my old man, see. But I think your kid’s pretty blessed just to have you trying so hard for her sake. She probably just hasn’t noticed it yet. Your efforts, I mean.” – Rock

“Since that guy can’t do anything, I can do something. I’m really happy about that, you see. Jyugo was the one who first gave me “Freedom”. He changed my life. That’s why I owe him a lifetime’s debt of gratitude. I don’t know what I can do or what I can give to him, but I want to give him everything I can. I want to do whatever I can to make sure he’s content.” – Rock 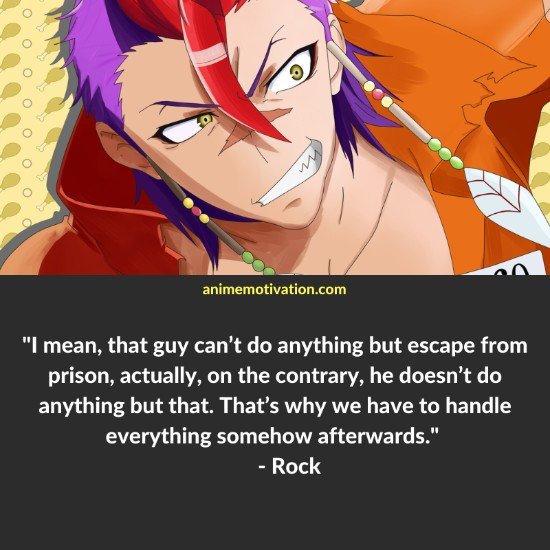 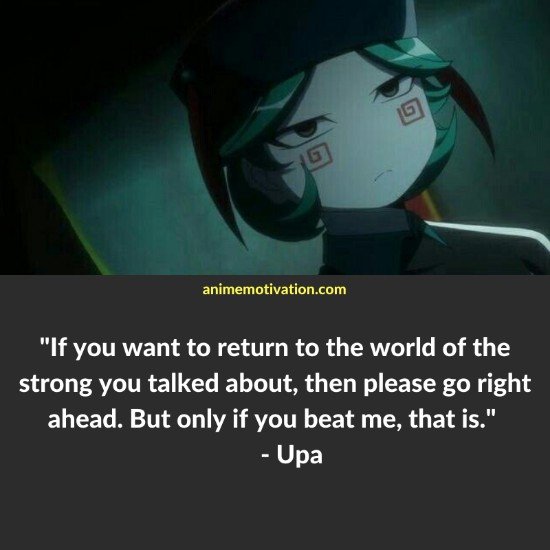 “If you want to return to the world of the strong you talked about, then please go right ahead. But only if you beat me, that is.” – Upa 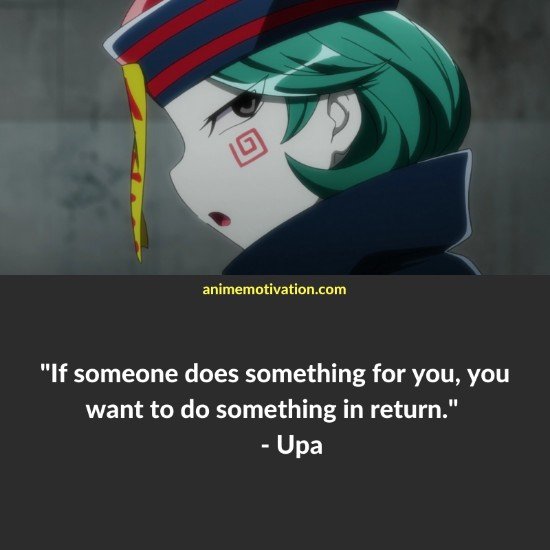 “If someone does something for you, you want to do something in return.” – Upa 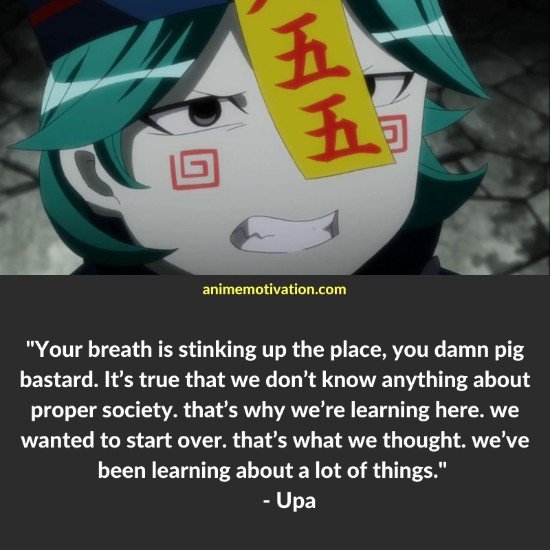 “Your breath is stinking up the place, you damn pig b*stard. It’s true that we don’t know anything about proper society. that’s why we’re learning here. we wanted to start over. that’s what we thought. we’ve been learning about a lot of things.” – Upa 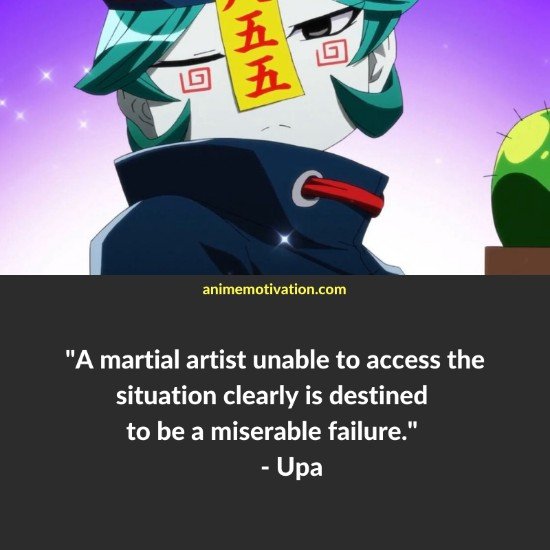 “A martial artist unable to access the situation clearly is destined to be a miserable failure.” – Upa 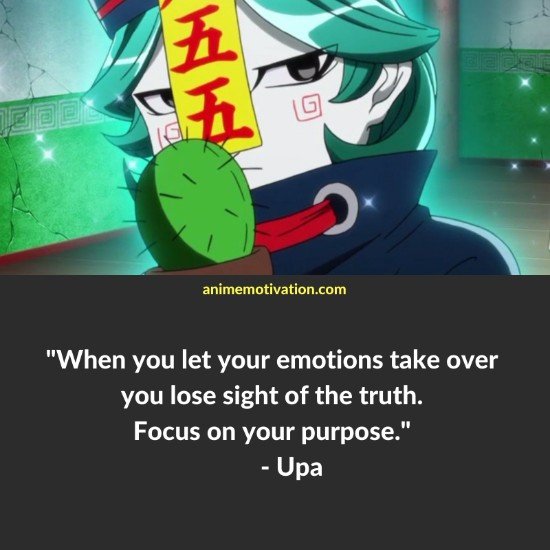 “When you let your emotions take over you lose sight of the truth. Focus on your purpose.” – Upa 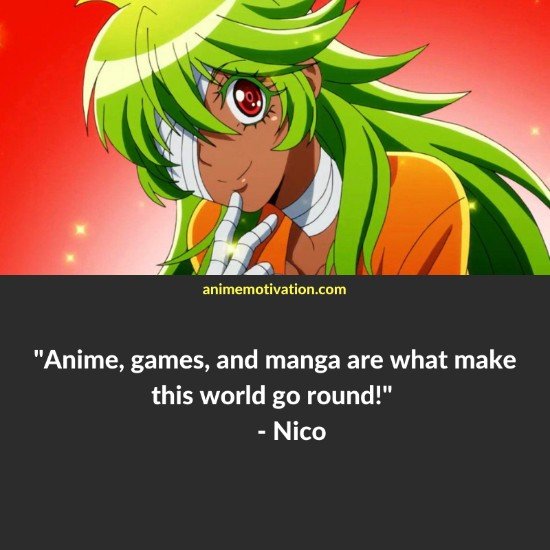 “manga are what make this world go round!” – Nico 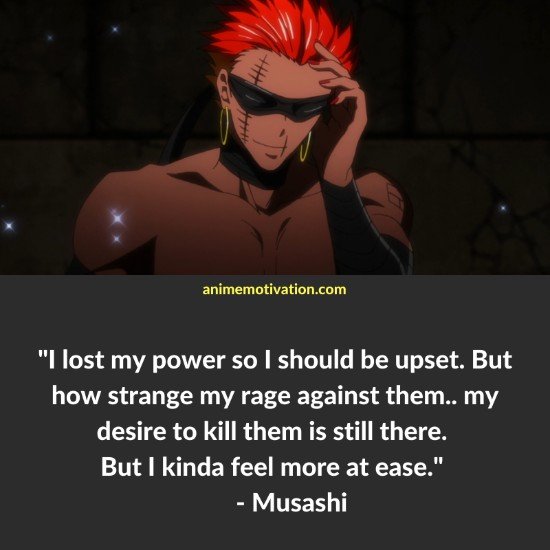 “I lost my power so I should be upset. but how strange my rage against them..my desire to kill them is still there. but I kinda feel more at ease.” – Musashi 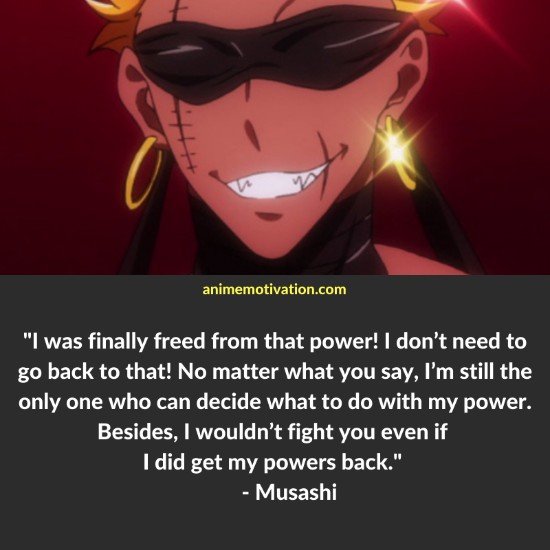 “I was finally freed from that power! I don’t need to go back to that! No matter what you say, I’m still the only one who can decide what to do with my power. Besides, I wouldn’t fight you even if I did get my powers back.” – Musashi 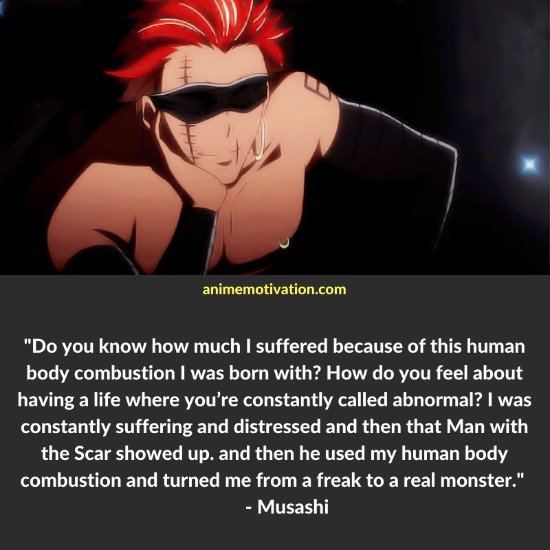 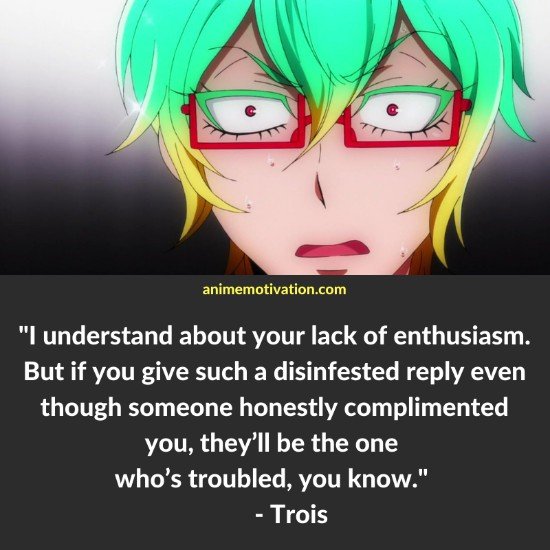 “I understand about your lack of enthusiasm. But if you give such a disinfested reply even though someone honestly complimented you, they’ll be the one who’s troubled, you know.” – Trois 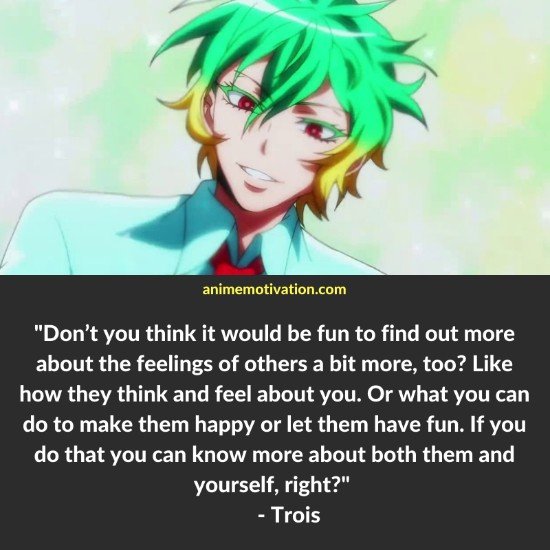 “Don’t you think it would be fun to find out more about the feelings of others a bit more, too? Like how they think and feel about you. Or what you can do to make them happy or let them have fun. If you do that you can know more about both them and yourself, right?” – Trois 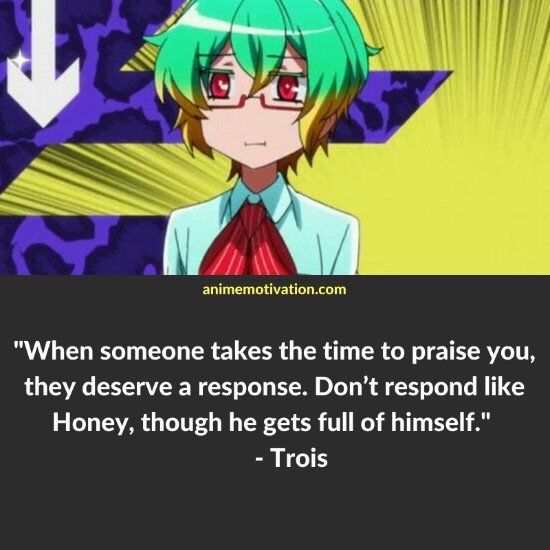 “When someone takes the time to praise you, they deserve a response. Don’t respond like Honey, though he gets full of himself.” – Trois 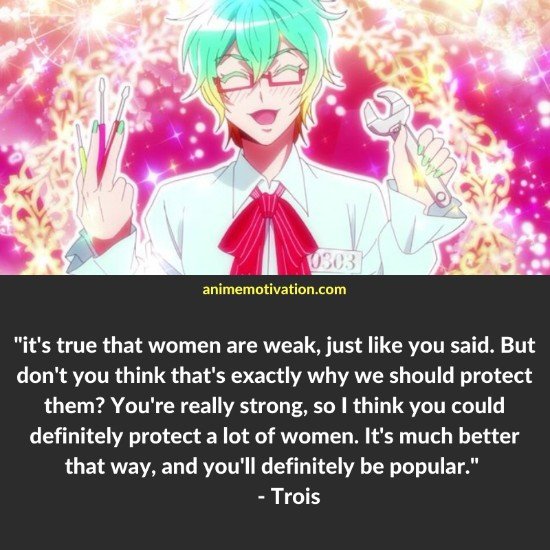 “it’s true that women are weak, just like you said. But don’t you think that’s exactly why we should protect them? You’re really strong, so I think you could definitely protect a lot of women. It’s much better that way, and you’ll definitely be popular.” – Trois 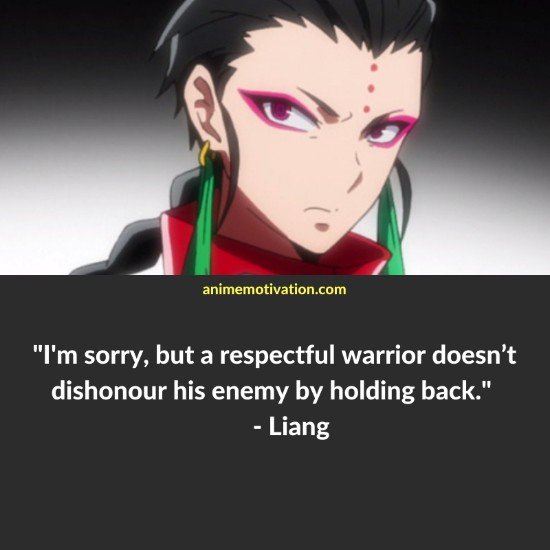 “I’m sorry, but a respectful warrior doesn’t dishonour his enemy by holding back.” – Liang 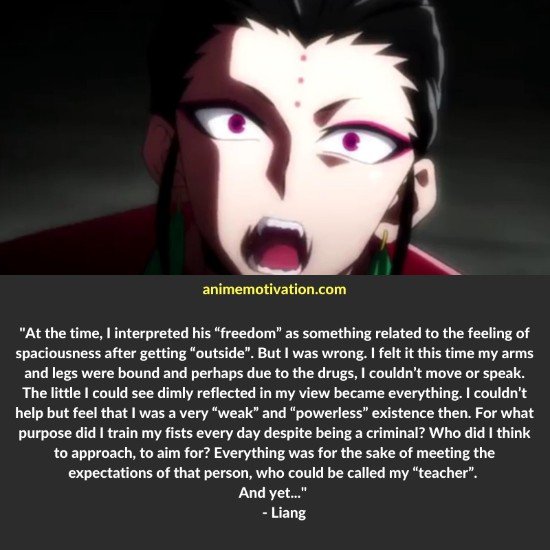 “At the time, I interpreted his “freedom” as something related to the feeling of spaciousness after getting “outside”. But I was wrong. I felt it this time my arms and legs were bound and perhaps due to the drugs, I couldn’t move or speak. The little I could see dimly reflected in my view became everything. I couldn’t help but feel that I was a very “weak” and “powerless” existence then. For what purpose did I train my fists every day despite being a criminal? Who did I think to approach, to aim for? Everything was for the sake of meeting the expectations of that person, who could be called my “teacher”. And yet…” – Liang 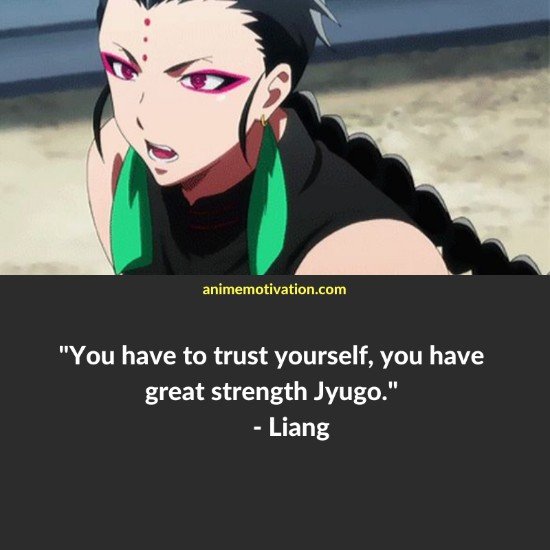 “You have to trust yourself, you have great strength Jyugo.” – Liang “I think “freedom” for me is being able to do something or being able to accomplish something. You were the one who gave me that chance. Jyugo, you have my thanks.” – Liang 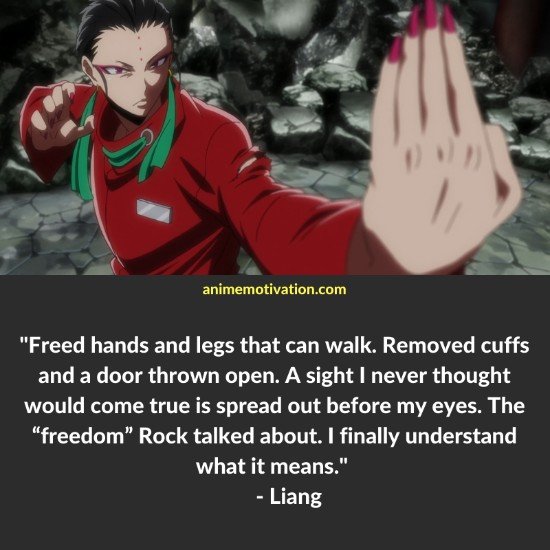 “Freed hands and legs that can walk. Removed cuffs and a door thrown open. A sight I never thought would come true is spread out before my eyes. The “freedom” Rock talked about. I finally understand what it means.” – Liang 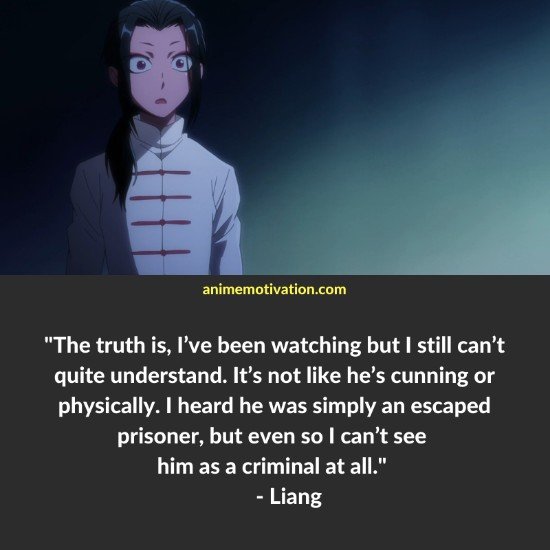 “The truth is, I’ve been watching but I still can’t quite understand. It’s not like he’s cunning or physically. I heard he was simply an escaped prisoner, but even so I can’t see him as a criminal at all.” – Liang 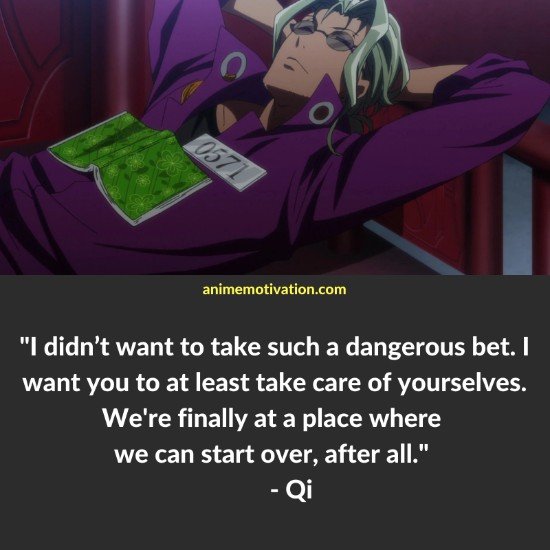 “I didn’t want to take such a dangerous bet. I want you to at least take care of yourselves. We’re finally at a place where we can start over, after all.” – Qi

“People who live honest lives lose out. People who have a dirty way of life win. I was always the latter, so this reality pierced deep.

I don’t think I can lead an honest life at this point, but I thought I wanted to do something, that it was fine even if it was just self-satisfaction. No matter what kind of thing it is, it definitely has a use. I wanted to prove that by myself.” – Qi

“That’s why I told you that stuff’s “poison”, right? To completely breaks people down to this point. It breaks down the actions, language, reactions, limits, and everything else of people and makes them go out of control.” – Qi

“Hachiman… you certainly do have a keen eye for people. You’re good at making deals and threatening others after all, but that’s what backfired on you.” – Qi

23+ Of The Best Quotes From Is The Order A Rabbit!