Slow Loop is an series dedicated to fishing. But it’s a specific type of fishing the main character Hiyori uses with a special kind of bait her father taught her to use.

It’s airing now during Winter 2022 and is off to a relaxed, wholesome start. With obvious slice of life elements.

And things along those lines.

Non Non Biyori is an series just like Slow Loop. It’s based in the countryside this time round, and has 4 girls as main characters.

Characters like Renge who’s the youngest likes going on adventures and having fun in the countryside. Climbing things, going through forests, and everything else rural life as to offer kids.

Natsumi is her main partner and they’re both rebels together.

Hotaru and Komari are the more  characters, with their own quirks and things they add to the ‘s adventures and slice of life vibes.

At the end of the day it’s an that will help you relax like Slow Loop.

2. Diary Of Our Days At The Breakwater

Diary Of Our Days At The Breakwater is an series that’s closely related to Slow Loop in obvious ways.

It’s an about fishing by the breakwater, which is a type of man made barrier that separates the sea from those on the coastline.

Hina Tsurugi gets roped into fishing by Yuuki, the deceptive, slow talking girl. And she almost faints at the sight of something they end up catching.

Eventually she warms to the costal life and going fishing. This is more so after running into childhood friend Natsumi in this new place Hina is now living in.

Takunomi is an about beer and alcoholic drinks basically. A bunch of girls who live together try and test these drinks almost daily.

On the surface it’s different to Slow Loop, but for it’s chilled, relaxed, and sometimes comedic vibes, it’s definitely in the same lane.

Some characters are , others are loud or energetic and so on.

It does feel like an advertisement for certain drinks in Japan though (the whole ).

She’s passionate about mountain climbing but an incident in her childhood changes things. And in the present story she’s making friends and finding new reasons to be encouraged to climb again.

Her and friends take part in this activity while also attending school, just as it is in Slow Loop with Hiyori and Koharu.

In a manner of speaking, Slow Loop and some of the on this list like Comic Girls are “ girls doing things” style of .

It’s just a different facet. In Slow Loop’s case, that facet being fishing.

Comic Girls is about a set of “ girls” who are mangaka’s, or upcoming author’s and artists.

Moeta, the pink haired MC is the source of this ‘s MOE moments and overly comedy.

She’s a little insecure but after meeting her Senpai’s she gains confidence in making and taking it professional.

Yuru Camp is all in the name-ish as well. It’s an series about camping.

This is what the adventures in Yuru Camp are centered around, as opposed to Slow Loop’s focus being on fishing and things related to seaside life.

Slow Loop fans will enjoy this series either way, and it’s a good transition with enough similarities to keep you entertained.

K-On is one of the main influences of “ girls doing things” style of . It’s also influential and responsible for MOE as we know it.

Yui Hirasawa is a scatter brain, an airhead. An optimistic girl who see’s the positive and is able to overlook the negative, especially when it comes to pursuing her goals.

She and others form the light music club, and make music together in their free time.

In reality they sit around eating cakes, desserts, messing round and doing dumb shit. But that’s the charm of this and its lack of a real plot.

Again, a good  to transition to after watching Slow Loop.

Is The Order A Rabbit is another filled with overly moe characters and moments.

The main character Chino Kafu is the granddaughter of the cafe she works in, with her friends Rize who’s the daughter of a militant father.

Not to mention Cocoa who has a sister complex with the “Dere Dere” dial turned up to the max.

You’ll notice it while watching, but many of the name’s resemble names given to ingredients or other things.

Barakamon is a slice of life series about Seishu Handa, a caligrapher who punches a guy in the face for ciriticzing his work.

Afterwards he’s sent off to live on an island and think about his actions. This is where he makes big personal changes and has a lot of personal development.

Aside from the more serious aspects of this , the wholesome, relaxed, and characters share similarities with Slow Loop.

The art style is different, but it feels familiar. 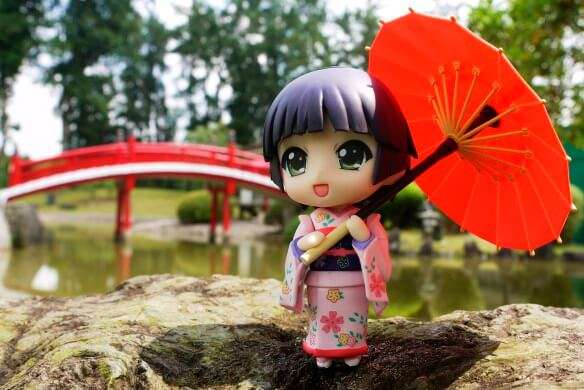 Kawaii Figures Start Shopping
We earn a commission from Amazon & other affiliates if you make a purchase at no additional cost to you.