Yuri anime characters are female, with Yaoi being the opposite.

Yuri is all about lesbian girls from different anime shows regardless of them being in the official “Yuri” genre.

You can also find lesbian anime girls in:

And other anime genres where they play minor roles or relevant roles in the story.

Here are some Yuri female anime characters I feel deserve some credit, or more credit than they get. 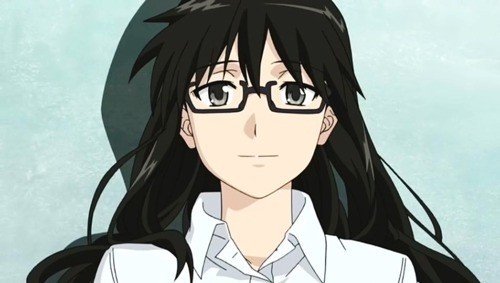 Sumika is a Yuri character most wouldn’t think of from the slice of life/romance: Sasameki Koto. Or “Whispered Words” in English.

She’s the clear introvert type who loves her own space and doesn’t like anyone bothering her unnecessarily.

Quiet, observational and sometimes shy depending on who she’s dealing with and the context of the situation.

In the anime she’s the main character who fancy’s Kazama, another MC who’s oblivious to her actions. Especially in the beginning. 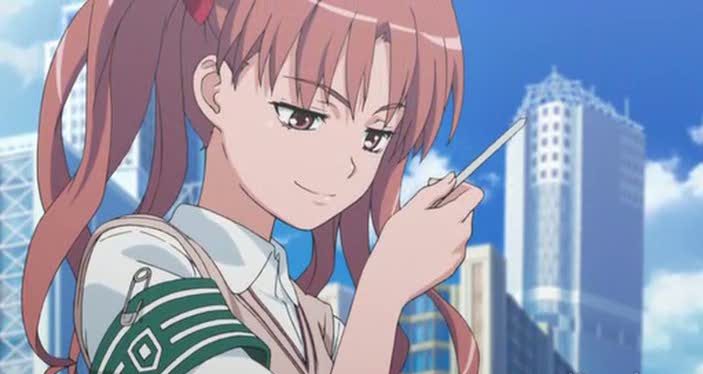 Kuroko Shirai is one of the secondary-main characters in Railgun. And probably gets more screen time than other characters aside from Mikoto Misaka.

The anime uses Kuroko for comedy because she’s sexually attracted to Mikoto Misaka, and both are best friends. But Mikoto gets violent when Kuroko “pushes” her luck.

But on the serious side of things, Kuroko is a martial artist and one of the anime’s best fighters. With skills to take down characters who are seemingly more powerful, physically.

She’s also a judgment officer, a type of mini “police” force and that’s where she was trained in the martial arts as a kid.

3. Touko Nanami (Bloom Into You) Touko Nanami is another lesbian Yuri anime character. But in this case – she shows her feelings for the person she loves in this romance/school series.

She’s straightforward and direct when it comes to her feelings for the other main character: Yuu. And doesn’t hold back whenever something’s on her mind.

On the surface Touko’s the perfect student council president who has everything going for her, but she’s insecure, seeking validation, and struggles more than people realize.

Bloom Into You’s has a lot of “guilty pleasure” vibes but characters like Touko make it more classy-ish and more ironed out compared to anime like Citrus. 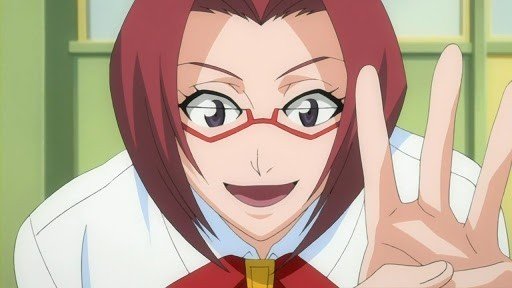 Chizuru Honsho isn’t the most relevant character in Bleach and doesn’t play any massive roles in the story. But she does have her “fair share” of moments.

Usually comedy and other nonsense in school with Orihime, Ichigo and other characters.

Honsho’s a proud lesbian and has no issue admitting it out loud. And similar to Touko she doesn’t hesitate to show it through her actions. But she’s a little on the extreme side.

She’s friends with some characters who go to Ichigo Kurosaki’s school. Kanbaru Suruga is a complex character when breaking down her role as a Lesbian/Yuri character. And even for other reasons.

Monogatari is that kind of anime.

She loves teasing the main character: Araragi and even going as far as to get naked in front of him. Knowing Araragi finds her attractive.

Mostly it’s to tease him because Kanbaru is a lesbian and only attracted to girls. But there’s a fine line that may say she swings both ways when analyzing the many layers of her character. Valmet is one of those tall, strong and attractive women who seem innocent and sweet, but hold a dark side that’s savage and brutal.

She’s an ex-military solider and part of it shows in her physical build.

She’s head over heels for the main character: Koko Hekmatyar and will do anything she tells her to. Even though Koko clearly doesn’t swing the same way and isn’t a lesbian.

Valmet’s role does hold relevance though and she’s not a comic relief type of character. 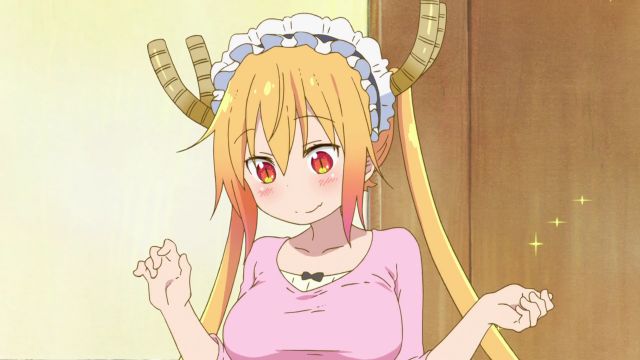 Tohru is the obvious lesbian type of Yuri character. She’s so blatant and thirsty that you find it out from the first few episodes of watching this Kyoani series.

Her stupidity and desperation never ends, and pisses off Kobayashi in more than just one occasion. But when she’s not fooling around she’s one of the reasons Miss Kobayashi’s Dragon Maid is so wholesome.

And the rare fight scenes you get out of this slice of life is in a league of its own, considering it’s not even the anime’s (or Tohru’s) biggest selling point.

8. Ikuno (Darling In The Franxx) 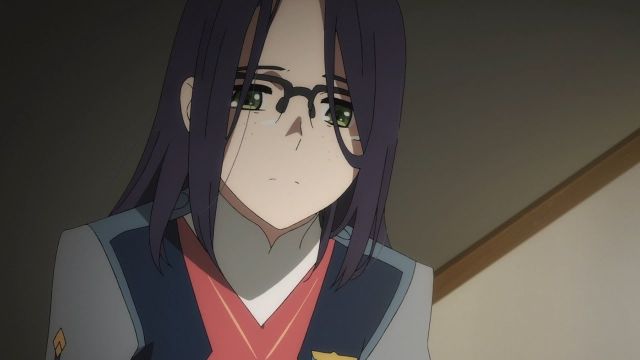 Ikuno is the quiet, shy type of Yuri character who comes off as cold, aloof and an absolute b*tch in Darling Of The Franxx.

It almost feels like she’s trying to attack you when she talks or that she’s indifferent and has no interest.

This attitude shifts later into the car crash of an anime that D.I.T.F becomes in the 2nd half.

Underneath that thick layer she hides behind, Ikuno’s more emotional than she seems, and has an undeniable attraction for women.

Relevant: How Darling In The Franxx Broke My Heart And Betrayed My Trust 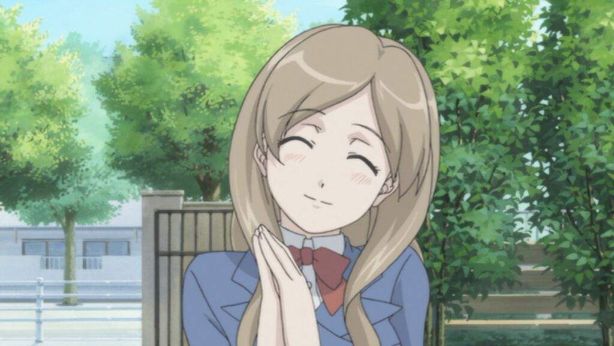 Ushio Kazama is the other main character in Whispered Words, or Sasameki Koto. A romance/Yuri series set in school.

Where as Sumika is an introvert, Kazama is clearly the extroverted type who’s sociable and talks to everyone, pretty much.

Some of her traits like how kind she is reminds me of Belldandy from Ah My Goddess, with the exception that Kazama is a lesbian.

She’s a bit passive and doesn’t notice what’s right in front of her unless you point it out and be direct with her. Hence the heartache that Sumika deals with in the plot. 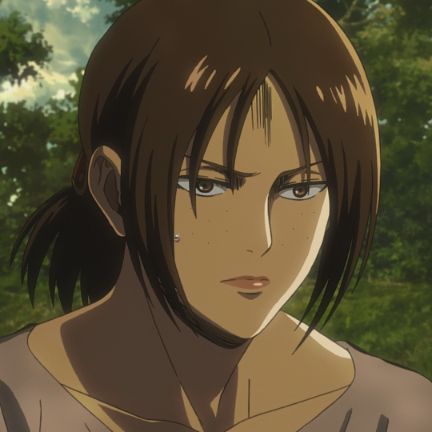 Ymir is a sensible character in Attack On Titan, and one of the more likable female characters in the series. Regardless of her Yuri-interests.

Strong, committed, plenty of inner-strength and has the stomach to go after what she wants. Even if it ends in disappointment.

This stems from her childhood, and you can see from her wisdom that she’s grown from her good and bad experiences in life.

She’s a lesbian character and it’s clear as F in AOT’S plot. 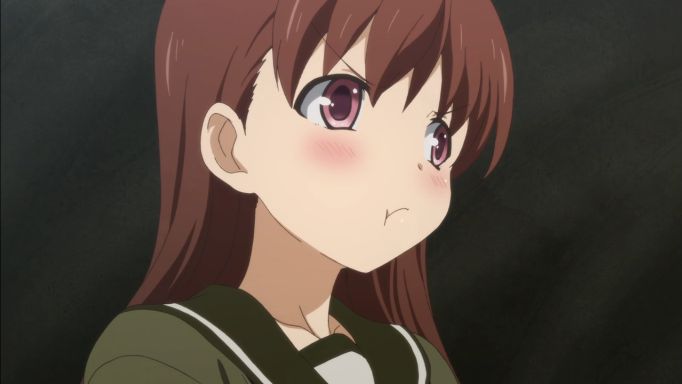 Ooi is a Kancolle character (the ) and Kantai Collection which is the anime.

In the anime most fans will know her as the overprotective, Yandere-type of anime girl who happens to be a lesbian. And is in love with Kitakami.

Ooi’s constant disrespect for a few characters in Kantai Collection has given her bad reputation, depending on who you talk to.

But personality and subjectivity aside, she’s a Yuri character and one of the more known lesbian characters. 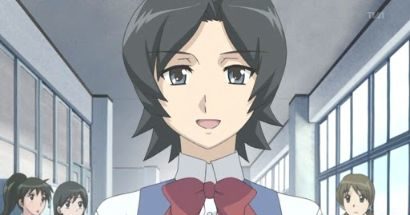 And to end this post I’ll throw in another character from Sasameki Koto. The anime after all is a good representation of lesbian characters with good personalities.

There aren’t that many comparable anime as far as quality with these types of female characters.

Tomoe is the oldest of the group and is the most direct, “no f*cks given” character when it comes to romance and affection for other girls. Or in the case of this series: Miyako Tamae.

Hachisuka a well rounded character and gives balance to the anime.

14+ Of The Best Yaoi Anime Characters You Need To Know