March Comes In Like A Lion quotes taken from characters:

March Comes In Like A Lion is a slice of life/seinen series about Rei. And his passion for playing the game: Shogi.

He’s naturally an introvert and has few friends, which is where his quotes comes from that are worth sharing.

As well as other characters who add meaning to the overall story of March Comes In Like A Lion.

Here are the best quotes from the .

The Best March Comes In Like A Lion Quotes: 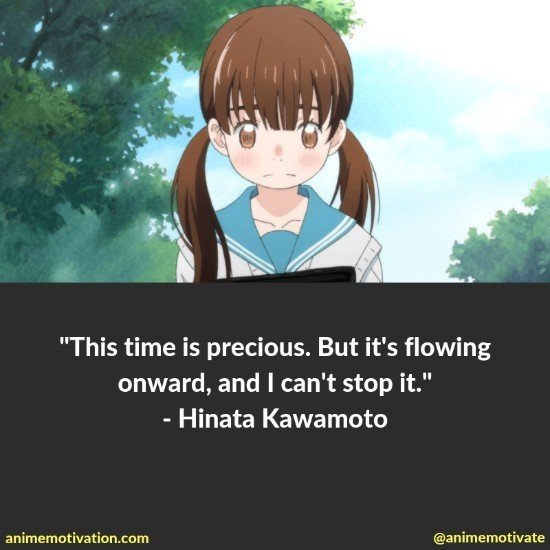 “This time is precious. But it’s flowing onward, and I can’t stop it.” – Hinata Kawamoto 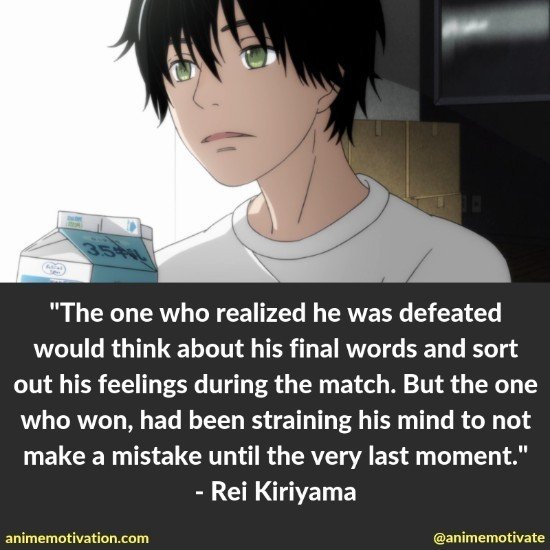 “The one who realized he was defeated would think about his final words and sort out his feelings during the match. But the one who won, had been straining his mind to not make a mistake until the very last moment.” – Rei Kiriyama 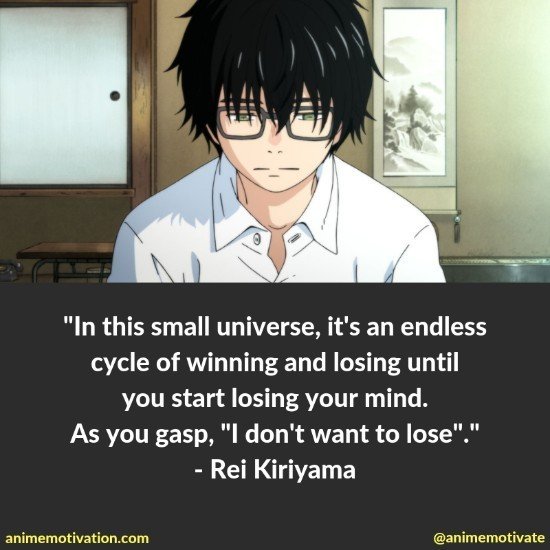 “In this small universe, it’s an endless cycle of winning and losing until you start losing your mind. As you gasp, “I don’t want to lose”.” – Rei Kiriyama 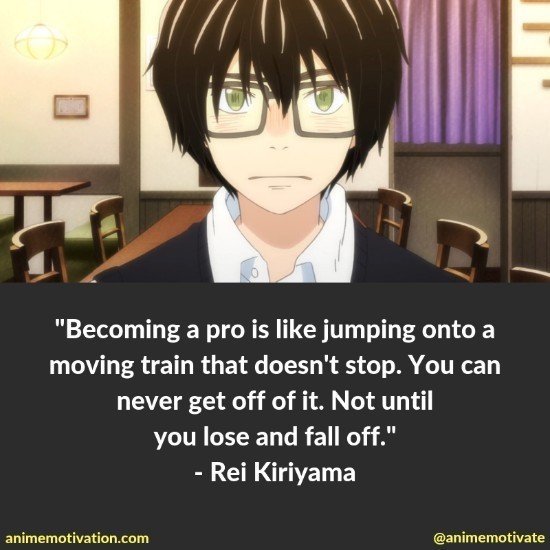 “Becoming a pro is like jumping onto a moving train that doesn’t stop. You can never get off of it. Not until you lose and fall off.” – Rei Kiriyama 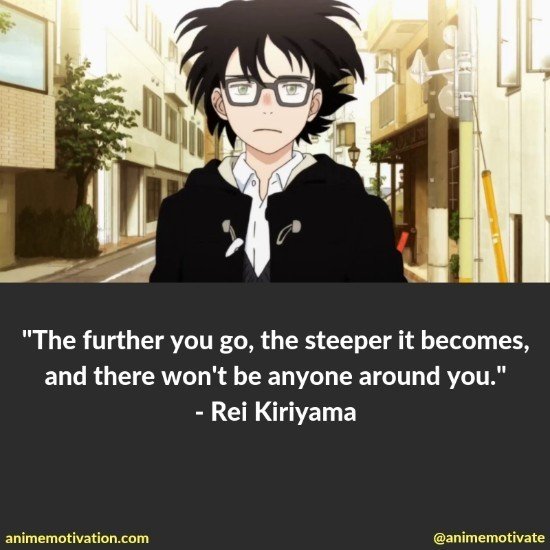 “The further you go, the steeper it becomes, and there won’t be anyone around you.” – Rei Kiriyama 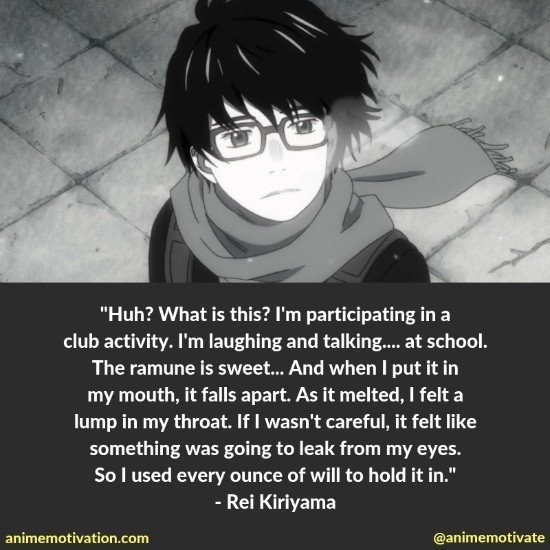 “Huh? What is this? I’m participating in a club activity. I’m laughing and talking…. at school. The ramune is sweet… And when I put it in my mouth, it falls apart. As it melted, I felt a lump in my throat. If I wasn’t careful, it felt like something was going to leak from my eyes. So I used every ounce of will to hold it in.” – Rei Kiriyama 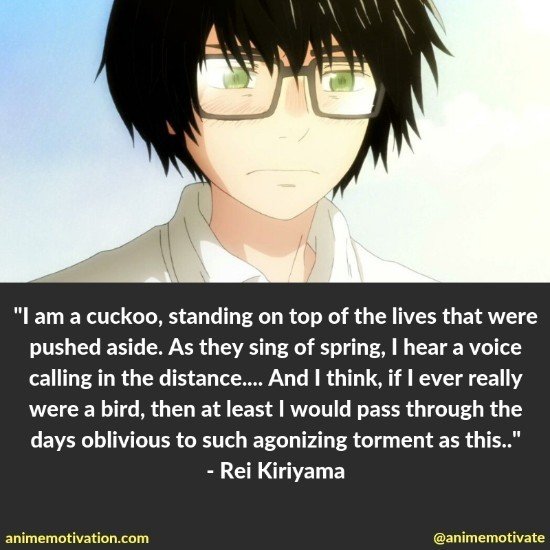 “I am a cuckoo, standing on top of the lives that were pushed aside. As they sing of spring, I hear a voice calling in the distance…. And I think, if I ever really were a bird, then at least I would pass through the days oblivious to such agonizing torment as this.” – Rei Kiriyama 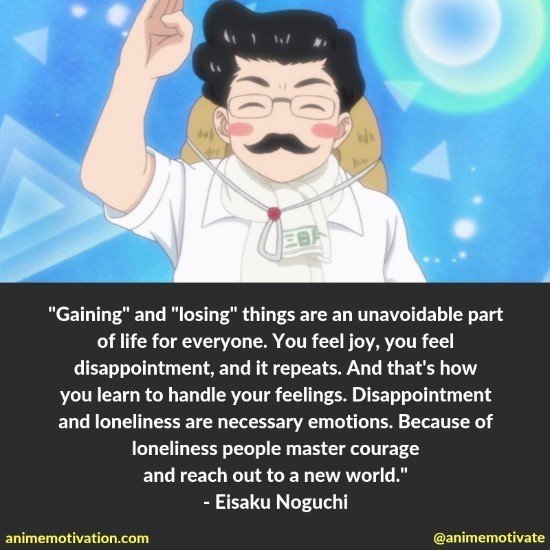 “Gaining” and “losing” things are an unavoidable part of life for everyone. You feel joy, you feel disappointment, and it repeats. And that’s how you learn to handle your feelings. Disappointment and loneliness are necessary emotions. Because of loneliness people master courage and reach out to a new world.” – Eisaku Noguchi 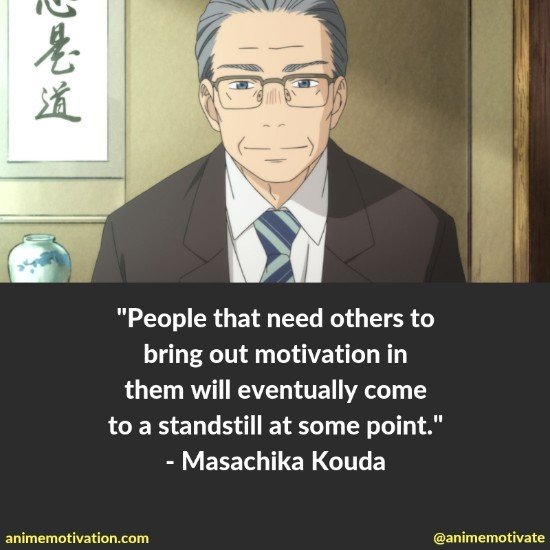 “People that need others to bring out motivation in them will eventually come to a standstill at some point.” – Masachika Kouda 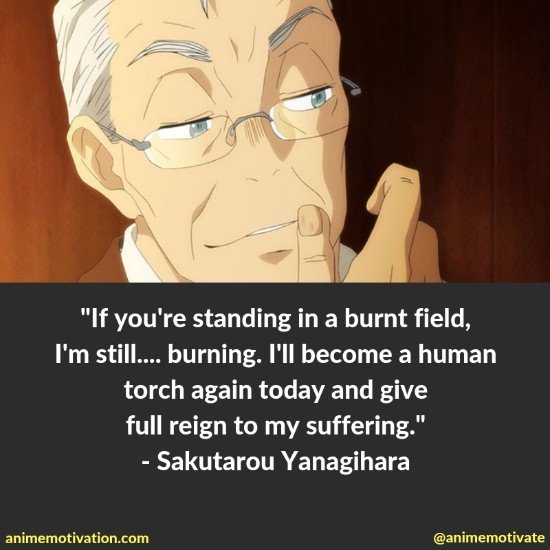 “If you’re standing in a burnt field, I’m still…. burning. I’ll become a human torch again today and give full reign to my suffering.” – Sakutarou Yanagihara 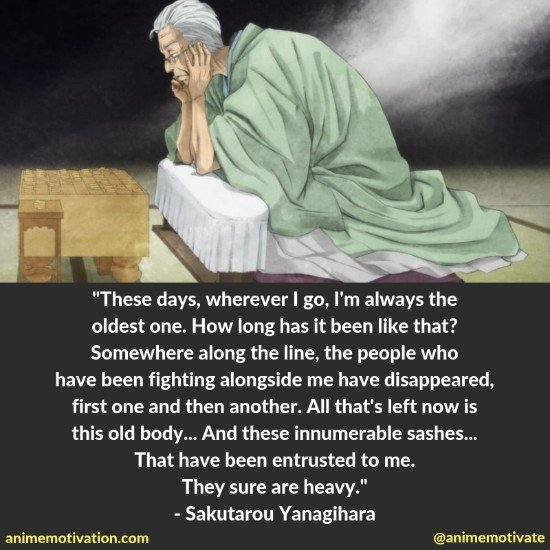 “These days, wherever I go, I’m always the oldest one. How long has it been like that? Somewhere along the line, the people who have been fighting alongside me have disappeared, first one and then another. All that’s left now is this old body… And these innumerable sashes… That have been entrusted to me. They sure are heavy.” – Sakutarou Yanagihara 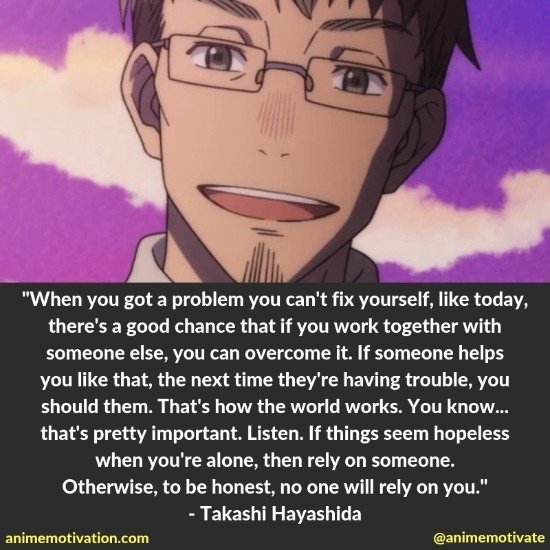 “When you got a problem you can’t fix yourself, like today, there’s a good chance that if you work together with someone else, you can overcome it. If someone helps you like that, the next time they’re having trouble, you should them. That’s how the world works. You know… that’s pretty important. Listen. If things seem hopeless when you’re alone, then rely on someone. Otherwise, to be honest, no one will rely on you.” – Takashi Hayashida 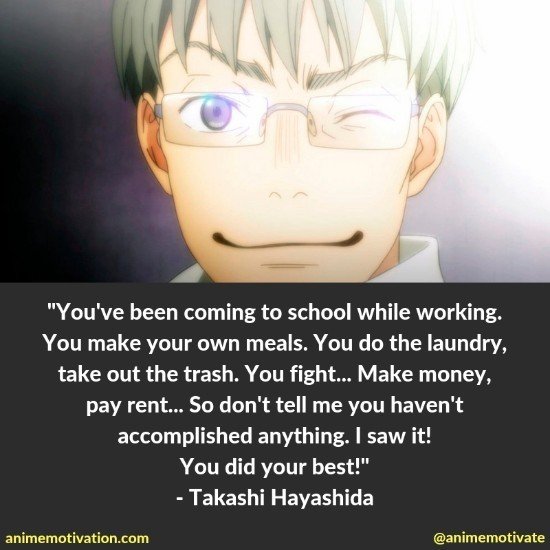 “You’ve been coming to school while working. You make your own meals. You do the laundry, take out the trash. You fight… Make , pay rent… So don’t tell me you haven’t accomplished anything. I saw it! You did your best!” – Takashi Hayashida 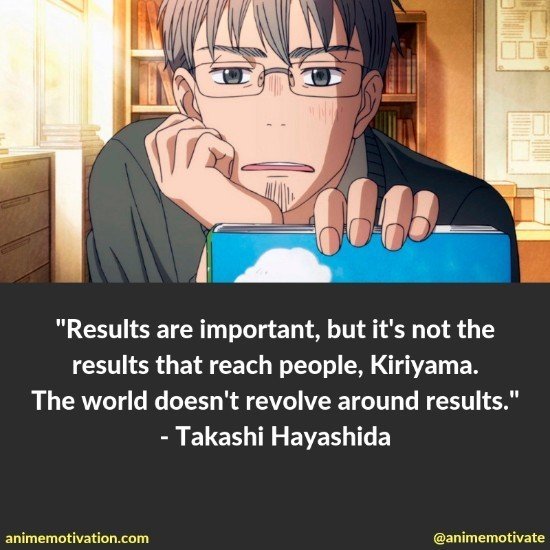 “Results are important, but it’s not the results that reach people, Kiriyama. The world doesn’t revolve around results.” – Takashi Hayashida 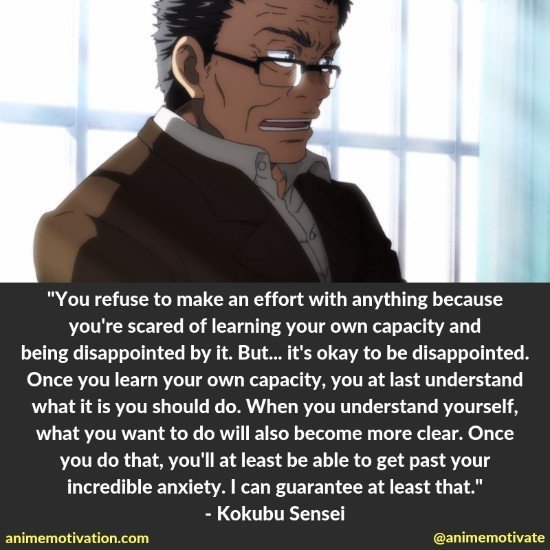 “You refuse to make an effort with anything because you’re scared of learning your own capacity and being disappointed by it. But… it’s okay to be disappointed. Once you learn your own capacity, you at last understand what it is you should do. When you understand yourself, what you want to do will also become more clear. Once you do that, you’ll at least be able to get past your incredible anxiety. I can guarantee at least that.” – Kokubu Sensei

21 Of The Most Heartfelt Quotes From Kamisama Kiss