A Certain Magical Index is the original was the first version before Railgun. A magical series by J.C Staff.

If you’re here for the best quotes Magical Index has to offer, you’re in the right place. Motivation is the #1 site for quotes!

With that said – let’s get straight to it. 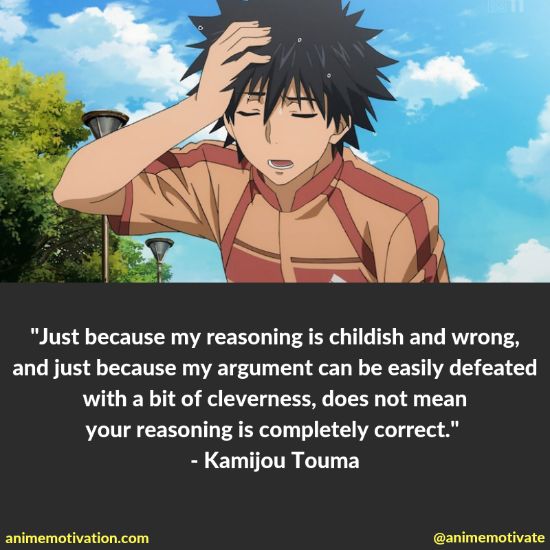 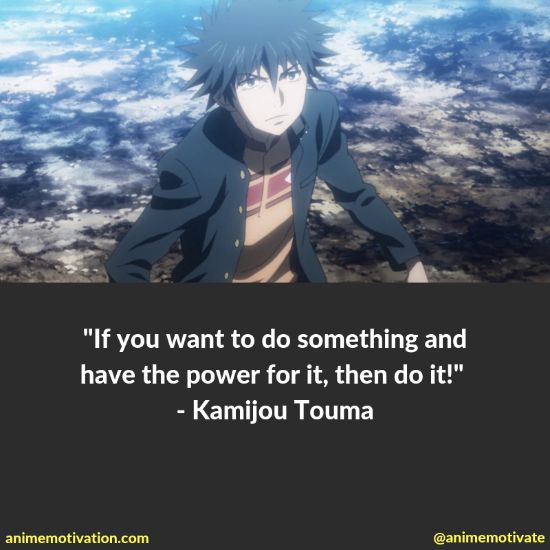 “If you want to do something and have the power for it, then do it!” – Kamijou Touma 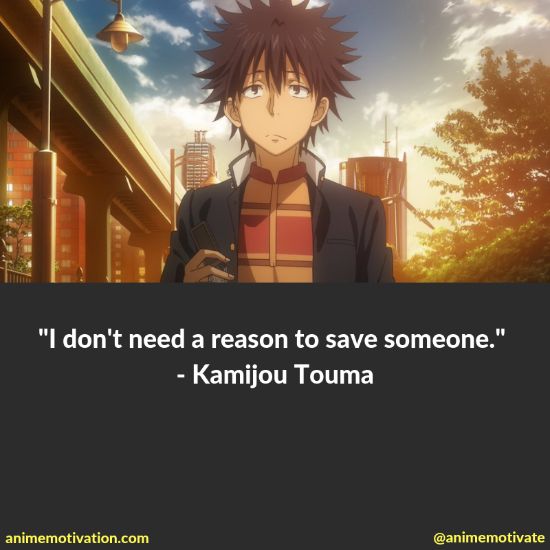 “I don’t need a reason to save someone.” – Kamijou Touma 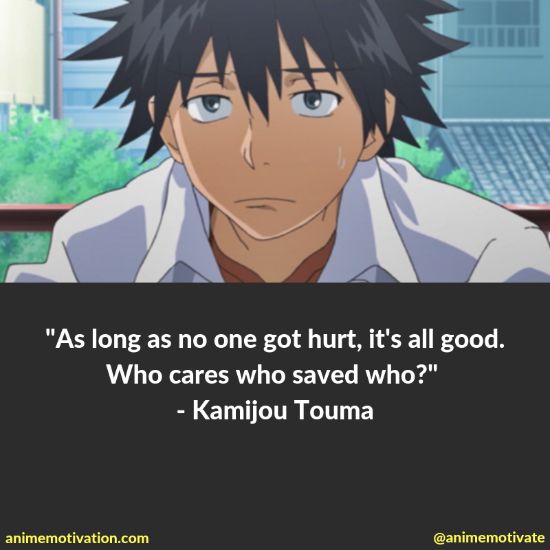 “As long as no one got hurt, it’s all good. Who cares who saved who?” – Kamijou Touma 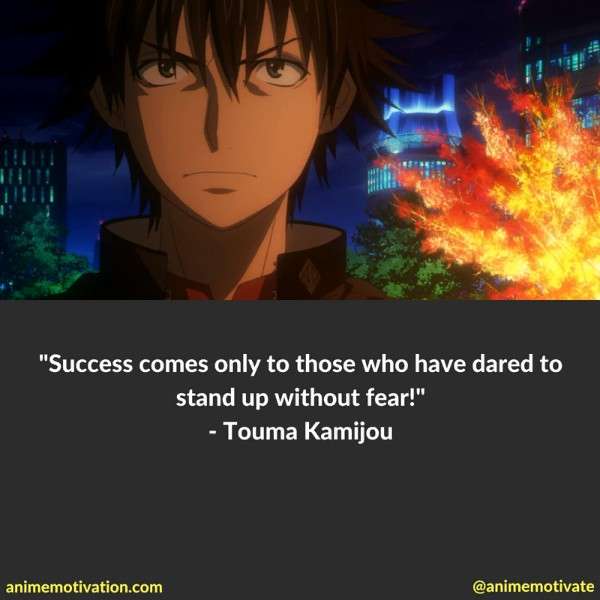 “Success comes only to those who have dared to stand up without fear!” – Kamijou Touma 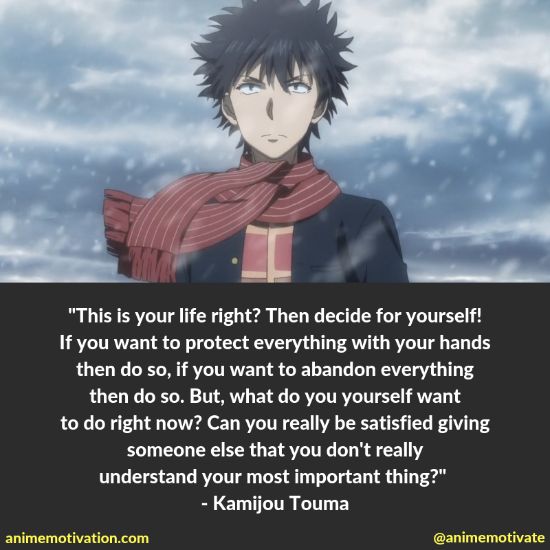 “This is your life right? Then decide for yourself! If you want to protect everything with your hands then do so, if you want to abandon everything then do so. But, what do you yourself want to do right now? Can you really be satisfied giving someone else that you don’t really understand your most important thing?” – Kamijou Touma 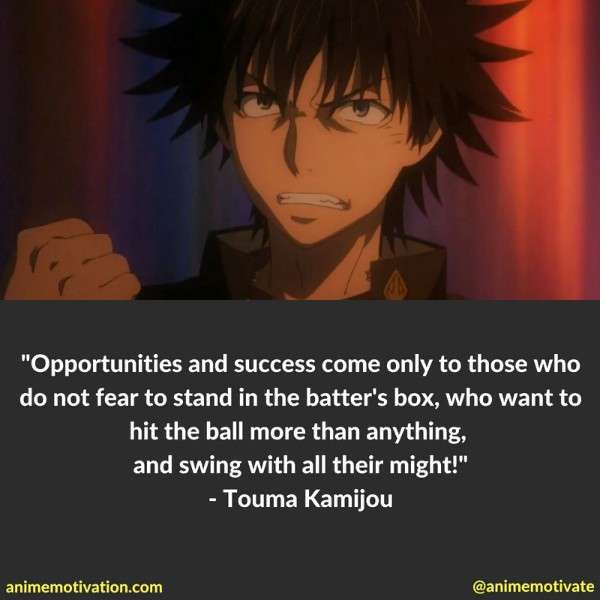 “Opportunities and success come only to those who do not fear to stand in the batter’s box. Who want to hit the ball more than anything, and swing with all their might!” – Kamijou Touma 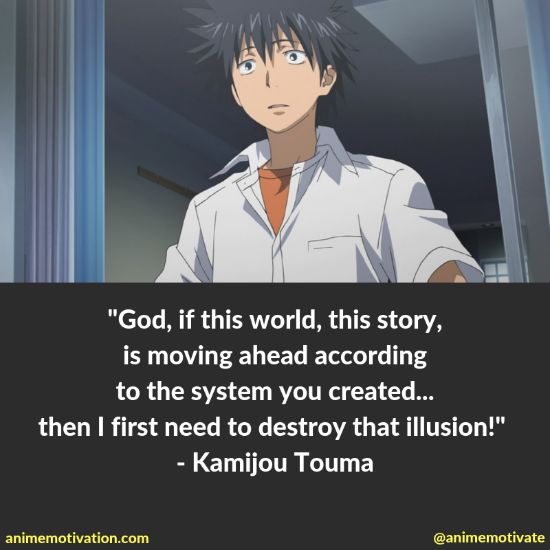 “God, if this world, this story, is moving ahead according to the system you created… then I first need to destroy that illusion!” – Kamijou Touma 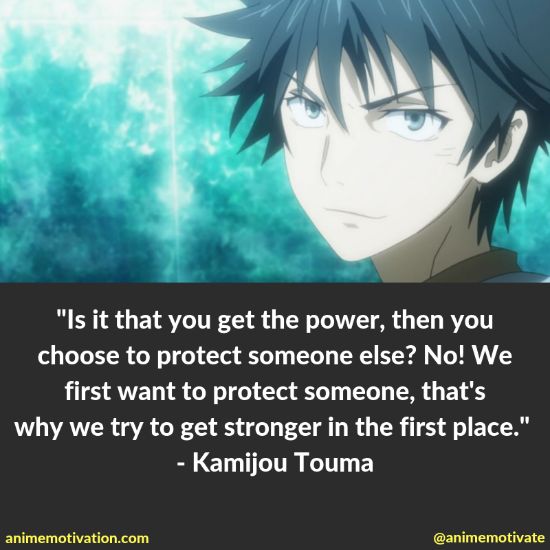 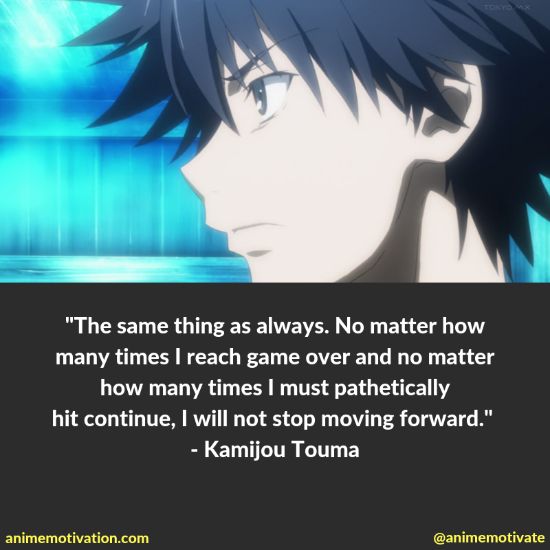 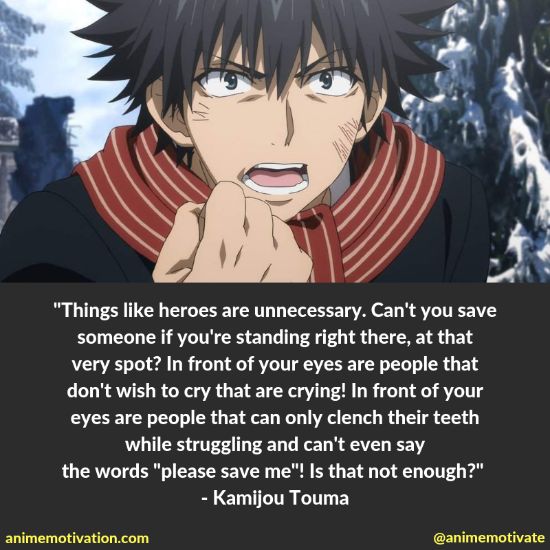 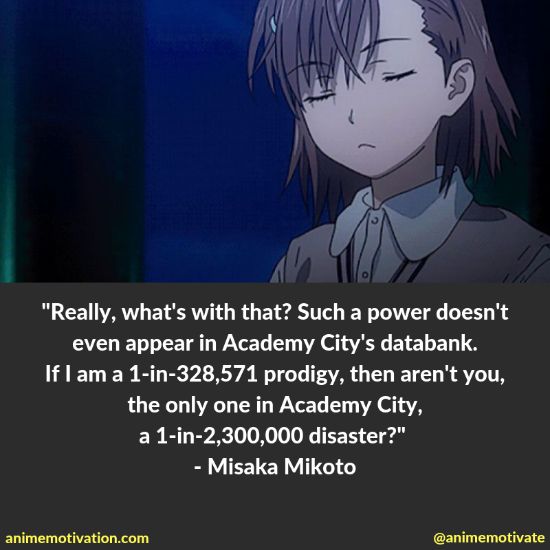 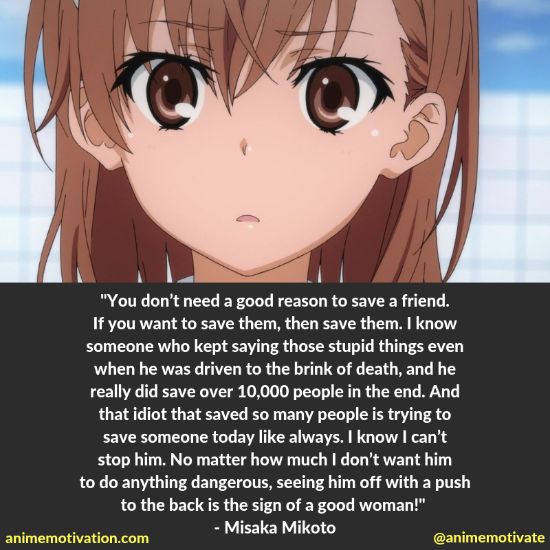 “You don’t need a good reason to save a friend. If you want to save them, then save them. I know someone who kept saying those stupid things even when he was driven to the brink of death, and he really did save over 10,000 people in the end. And that idiot that saved so many people is trying to save someone today like always. I know I can’t stop him. No matter how much I don’t want him to do anything dangerous, seeing him off with a push to the back is the sign of a good woman!” – Mikoto Misaka 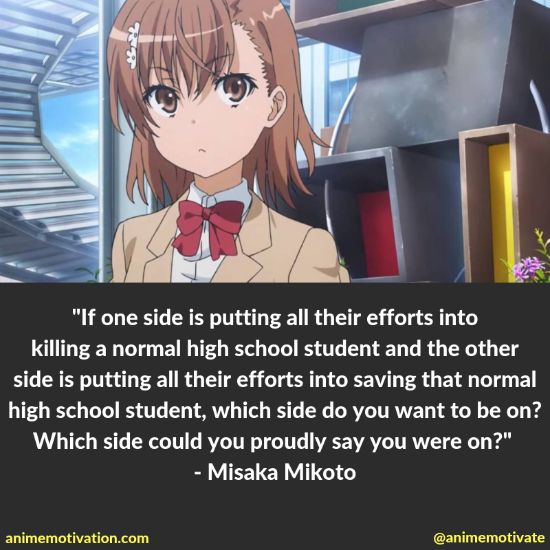 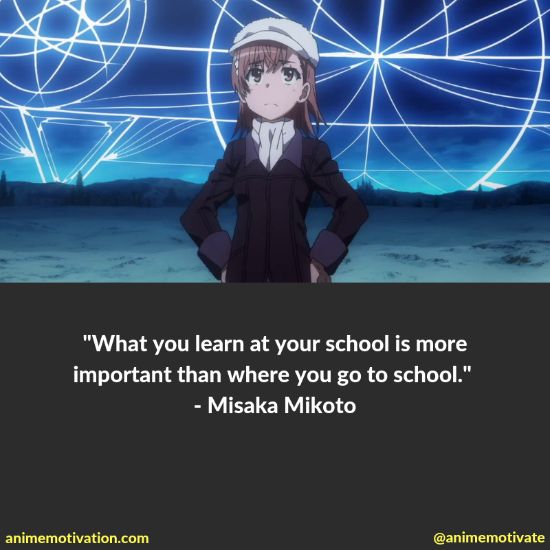 “What you learn at your school is more important than where you go to school.” – Mikoto Misaka 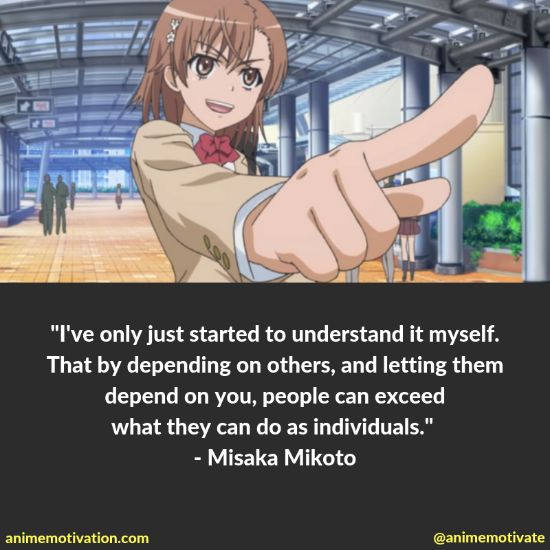 “I’ve only just started to understand it myself. That by depending on others, and letting them depend on you, people can exceed what they can do as individuals.” – Mikoto Misaka 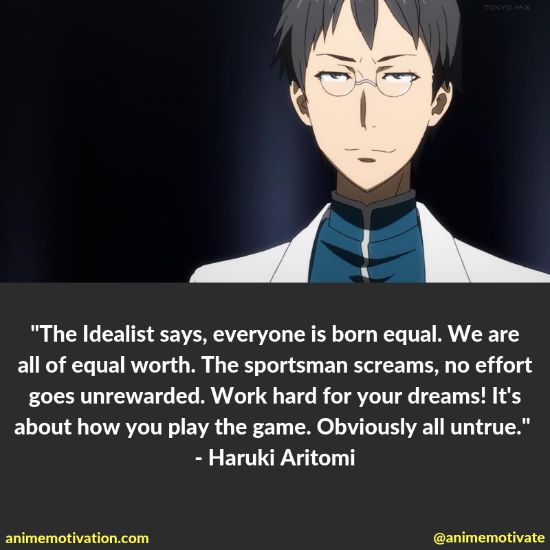 “The Idealist says, everyone is born equal. We are all of equal worth. The sportsman screams, no effort goes unrewarded. Work hard for your dreams! It’s about how you play the game. Obviously all untrue.” – Haruki Aritomi 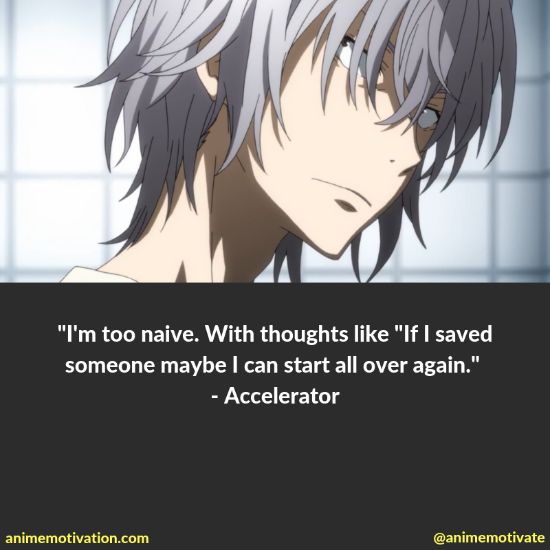 “I’m too naive. With thoughts like “If I saved someone maybe I can start all over again.” – Accelerator 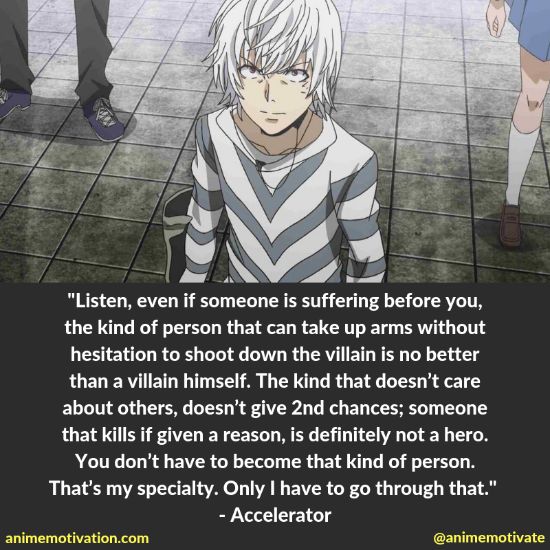 “Listen, even if someone is suffering before you, the kind of person that can take up arms without hesitation to shoot down the villain is no better than a villain himself. The kind that doesn’t care about others, doesn’t give 2nd chances; someone that kills if given a reason, is definitely not a hero. You don’t have to become that kind of person. That’s my specialty. Only I have to go through that.” – Accelerator 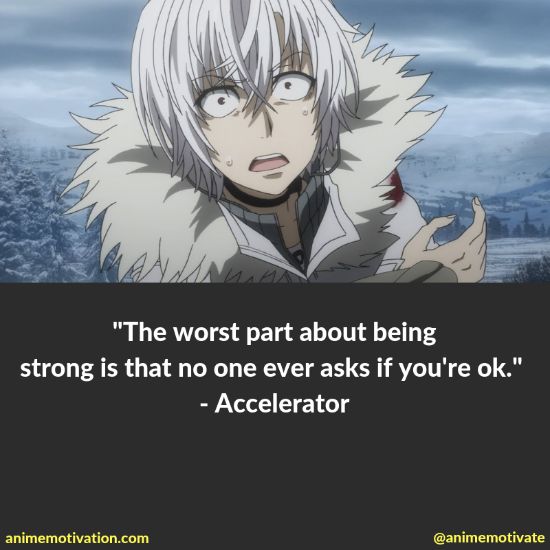 “The worst part about being strong is that no one ever asks if you’re ok.” – Accelerator 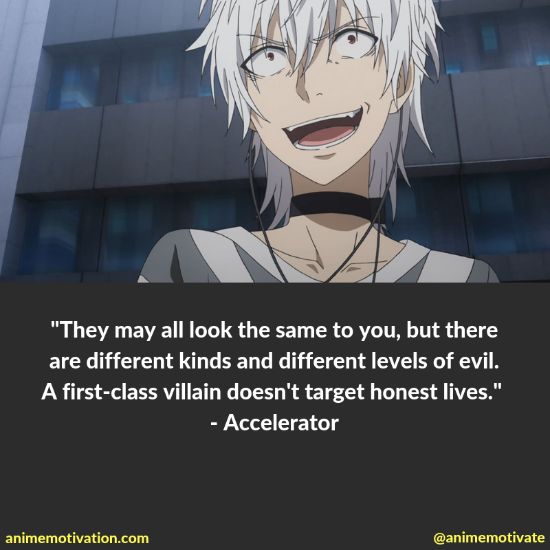 “They may all look the same to you, but there are different kinds and different levels of evil. A first-class villain doesn’t target honest lives.” – Accelerator 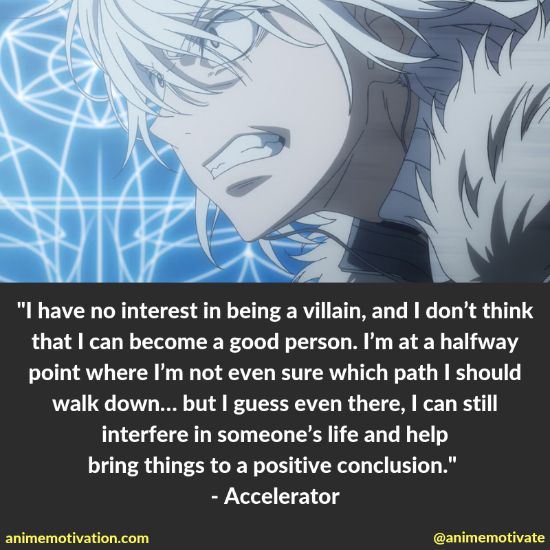 “I have no interest in being a villain, and I don’t think that I can become a good person. I’m at a halfway point where I’m not even sure which path I should walk down… but I guess even there, I can still interfere in someone’s life and help bring things to a positive conclusion.” – Accelerator 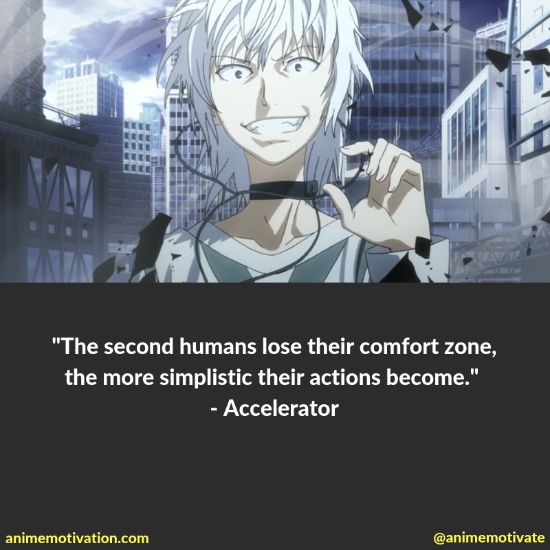 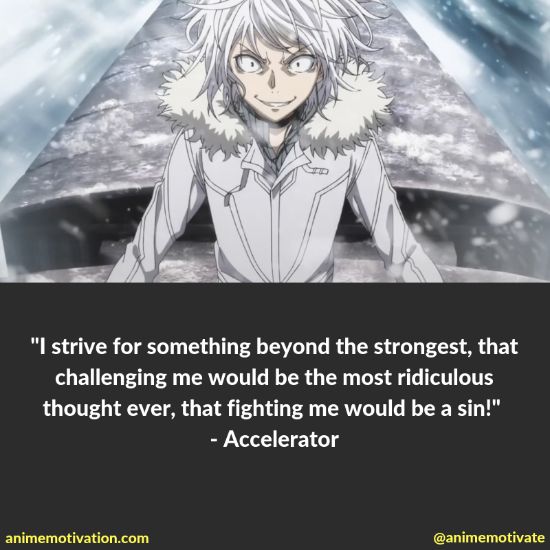 “I strive for something beyond the strongest, that challenging me would be the most ridiculous thought ever, that fighting me would be a sin!” – Accelerator 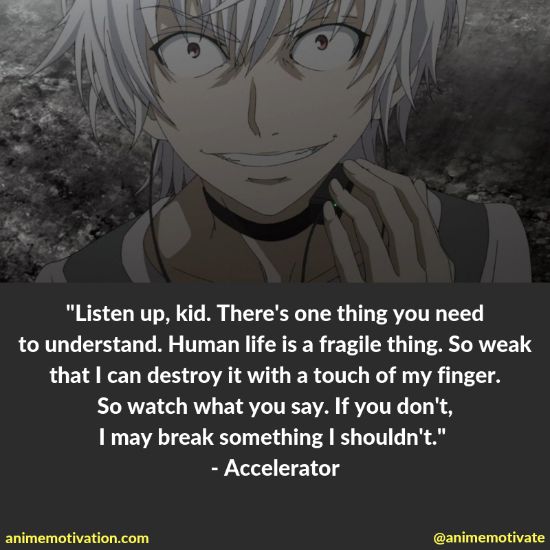 “Listen up, kid. There’s one thing you need to understand. Human life is a fragile thing. So weak that I can destroy it with a touch of my finger. So watch what you say. If you don’t, I may break something I shouldn’t.” – Accelerator 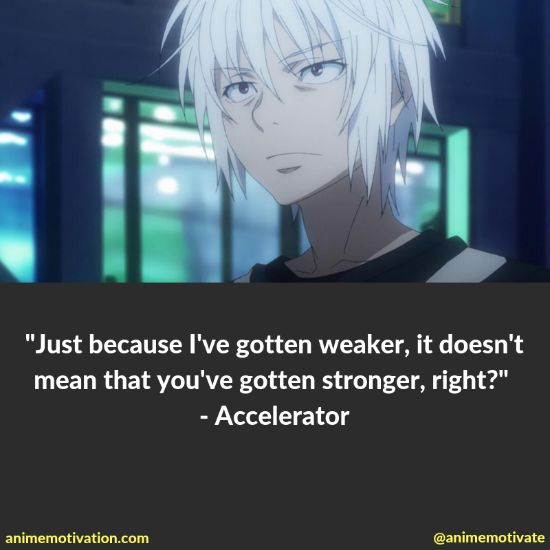 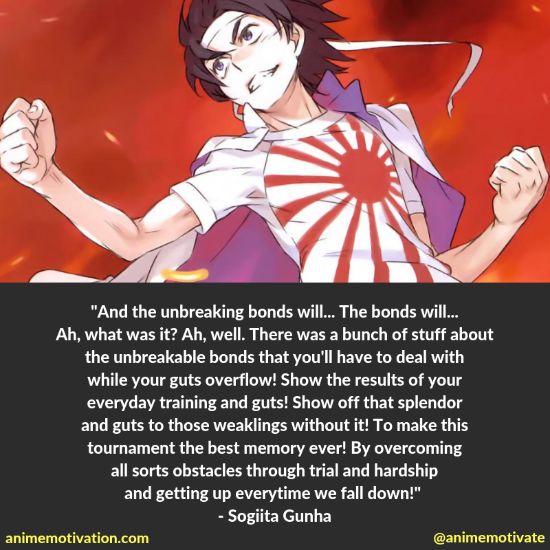 “And the unbreaking bonds will… The bonds will… Ah, what was it? Ah, well. There was a bunch of stuff about the unbreakable bonds that you’ll have to deal with while your guts overflow! Show the results of your everyday training and guts! Show off that splendor and guts to those weaklings without it! To make this tournament the best memory ever! By overcoming all sorts obstacles through trial and hardship and getting up everytime we fall down!” – Sogiita Gunha 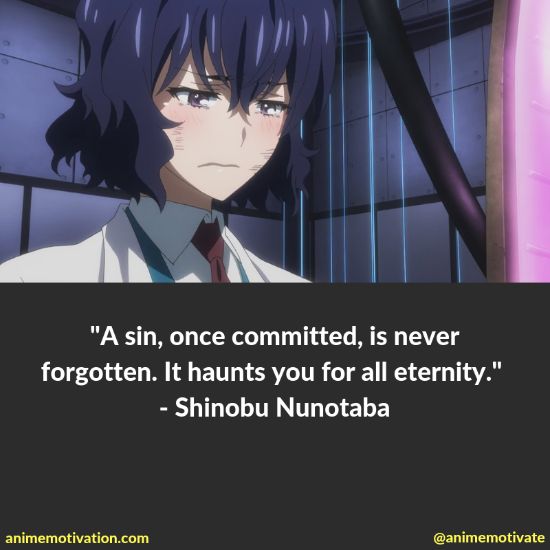 “A sin, once committed, is never forgotten. It haunts you for all eternity.” – Shinobu Nunotaba

A Collection Of Quotes From “The Promised Neverland”