Shirobako is an educational anime series about the anime industry, produced by P.A Works (studio).

Right from the start this anime holds a lot of meaning, so it makes sense to see this bleed into the quotes from different characters.

Here are the best Shirobako quotes. 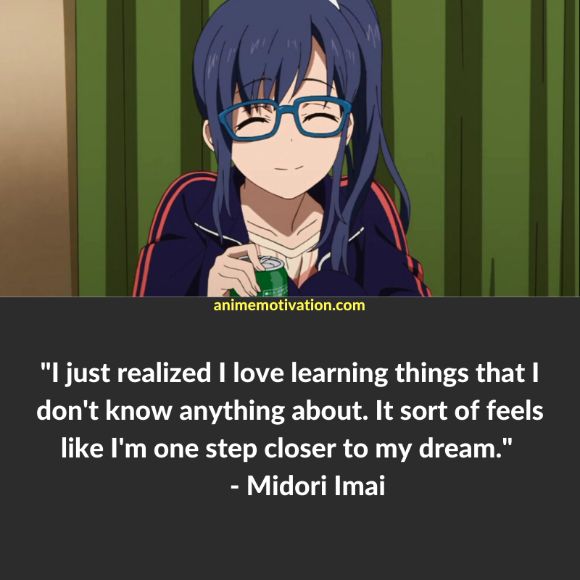 “I just realized I love learning things that I don’t know anything about. It sort of feels like I’m one step closer to my dream.” – Midori Imai 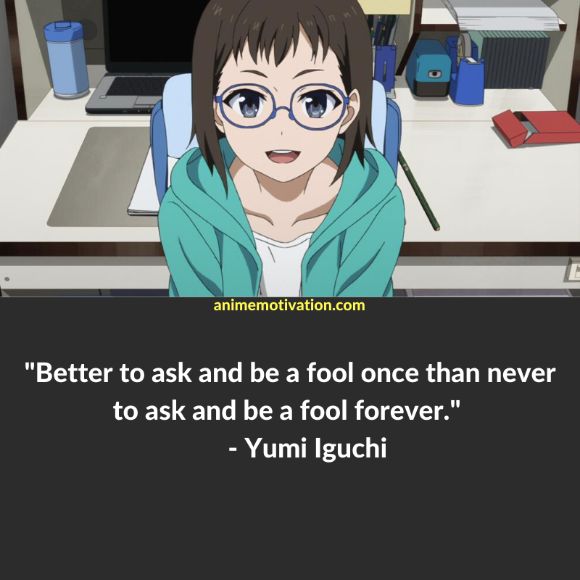 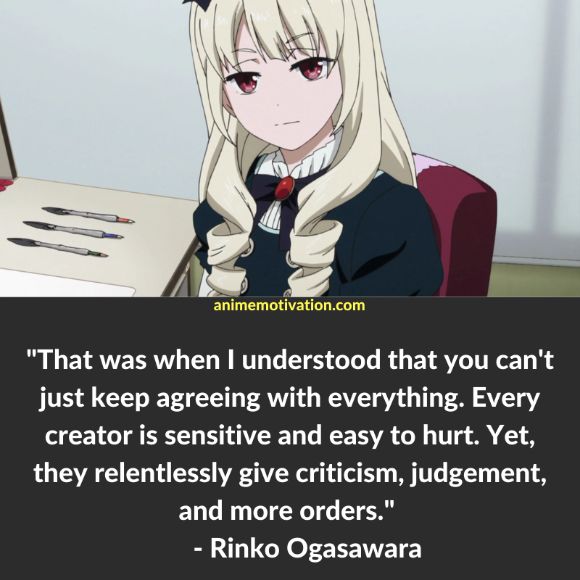 “That was when I understood that you can’t just keep agreeing with everything. Every creator is sensitive and easy to hurt. Yet, they relentlessly give criticism, judgement, and more orders.” – Rinko Ogasawara 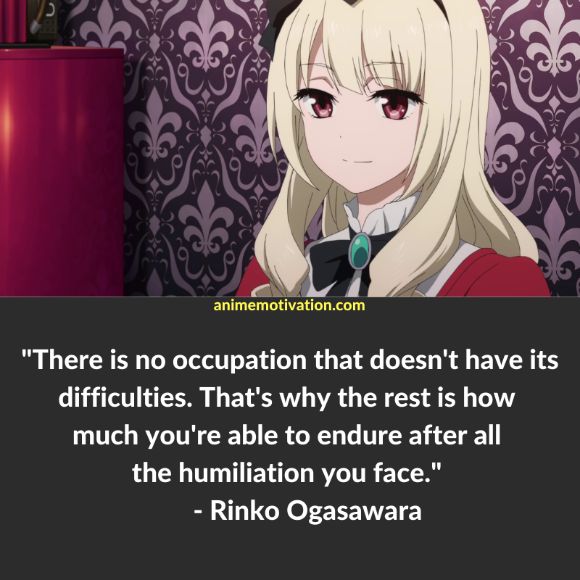 “There is no occupation that doesn’t have its difficulties. That’s why the rest is how much you’re able to endure after all the humiliation you face.” – Rinko Ogasawara 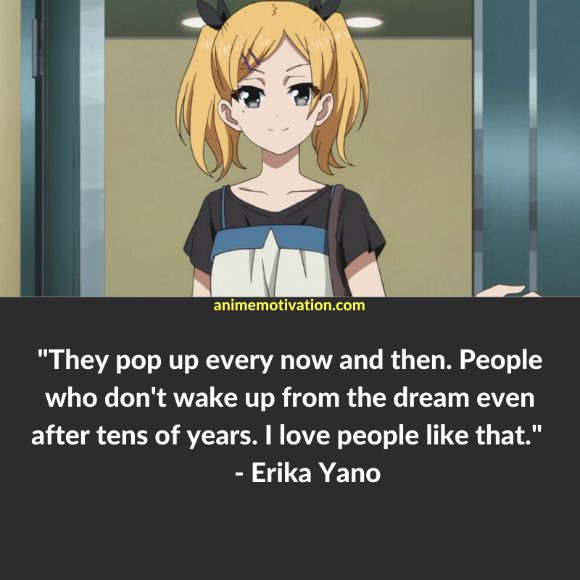 “They pop up every now and then. People who don’t wake up from the dream even after tens of years. I love people like that.” – Erika Yano 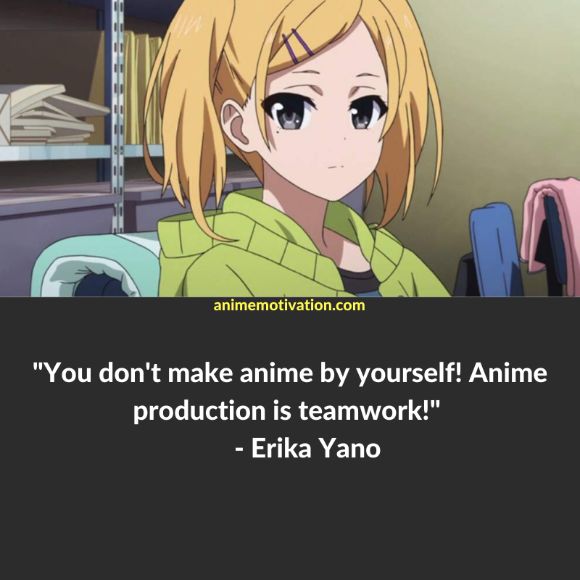 “You don’t make anime by yourself! Anime production is teamwork!” – Erika Yano 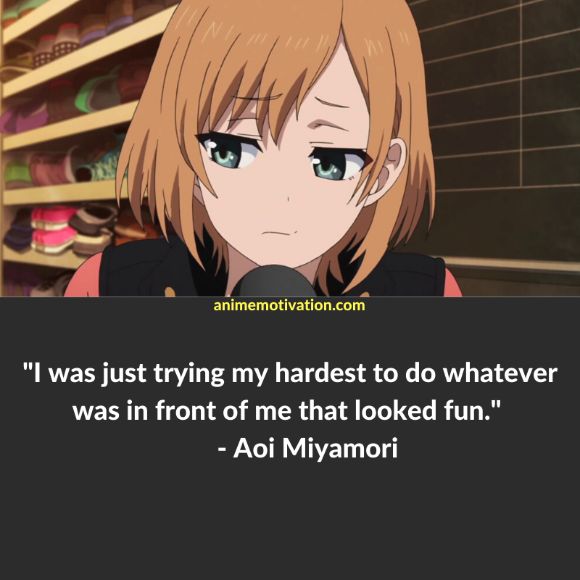 “I was just trying my hardest to do whatever was in front of me that looked fun.” – Aoi Miyamori 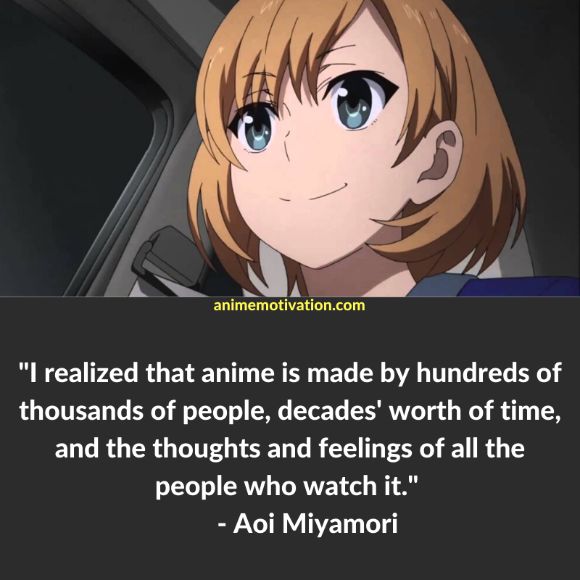 “I realized that anime is made by hundreds of thousands of people, decades’ worth of time, and the thoughts and feelings of all the people who watch it.” – Aoi Miyamori 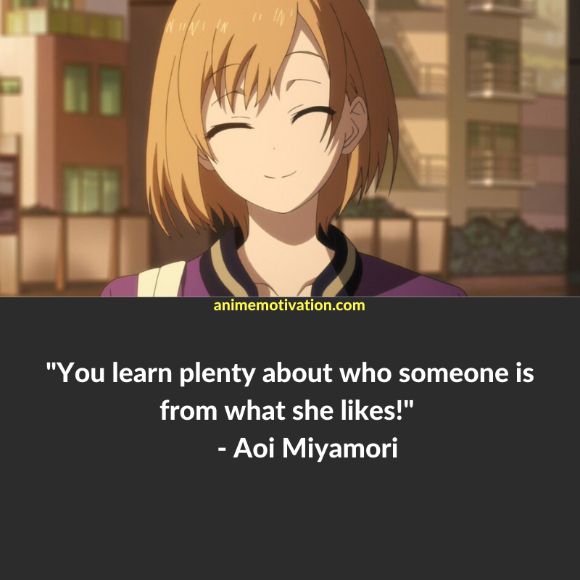 “You learn plenty about who someone is from what she likes!” – Aoi Miyamori 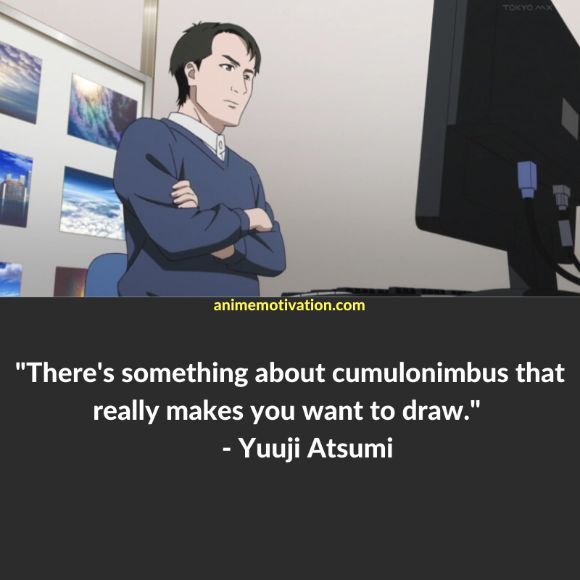 “There’s something about cumulonimbus that really makes you want to draw.” – Yuuji Atsumi 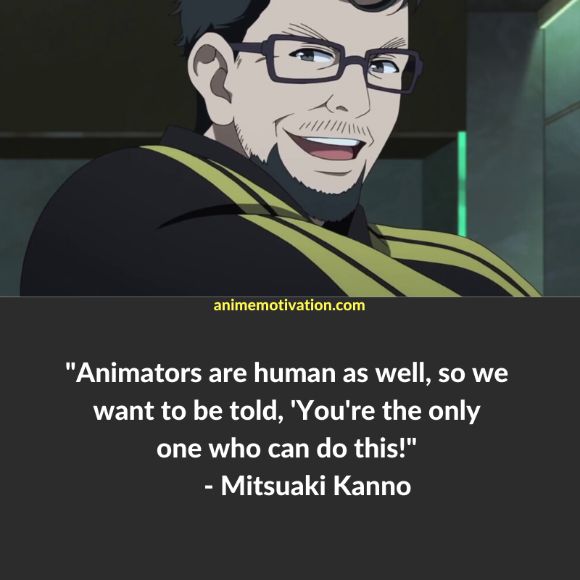 “Animators are human as well, so we want to be told, ‘You’re the only one who can do this!” – Mitsuaki Kanno 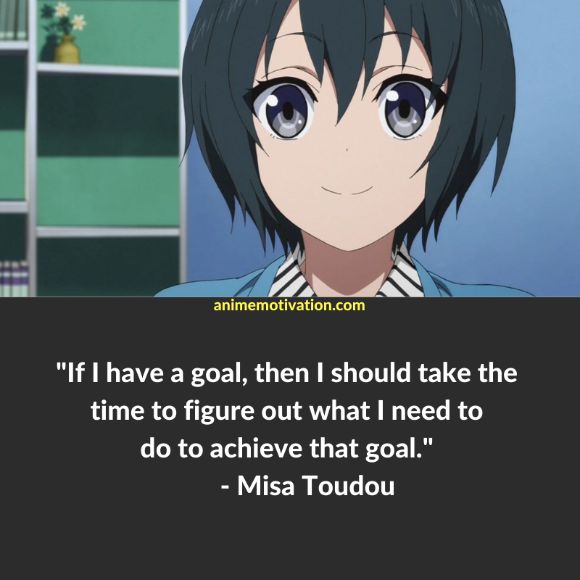 “If I have a goal, then I should take the time to figure out what I need to do to achieve that goal.” – Misa Toudou 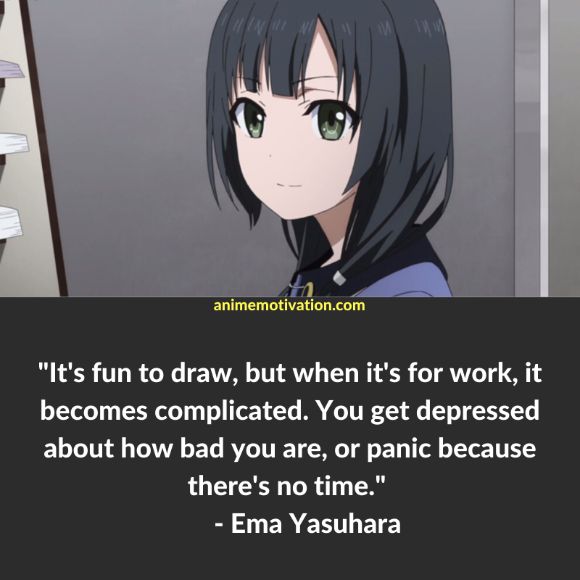 “It’s fun to draw, but when it’s for work, it becomes complicated. You get depressed about how bad you are, or panic because there’s no time.” – Ema Yasuhara 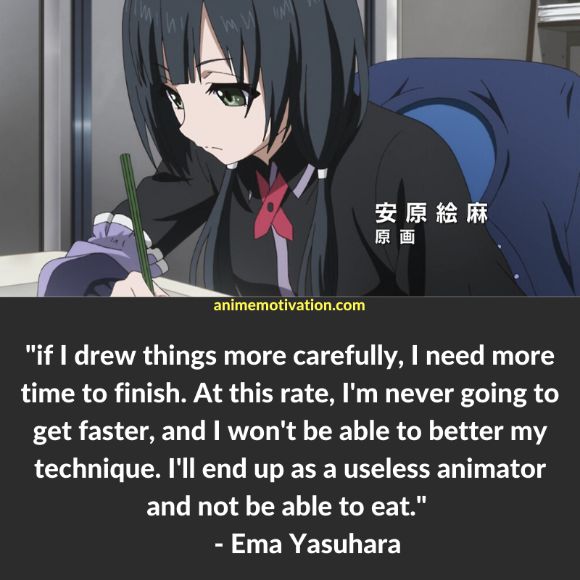 “if I drew things more carefully, I need more time to finish. At this rate, I’m never going to get faster, and I won’t be able to better my technique. I’ll end up as a useless animator and not be able to eat.” – Ema Yasuhara 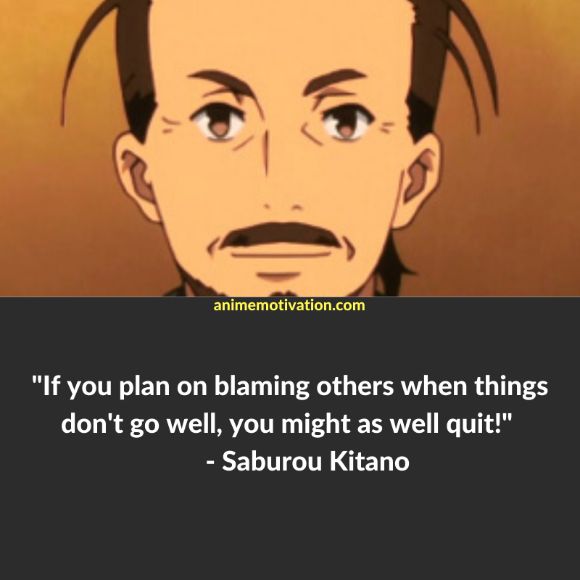 “If you plan on blaming others when things don’t go well, you might as well quit!” – Saburou Kitan 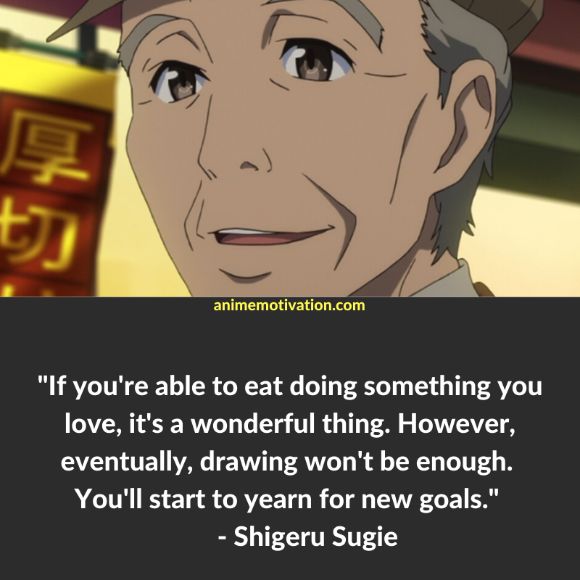 “If you’re able to eat doing something you love, it’s a wonderful thing. However, eventually, drawing won’t be enough. You’ll start to yearn for new goals.” – Shigeru Sugie 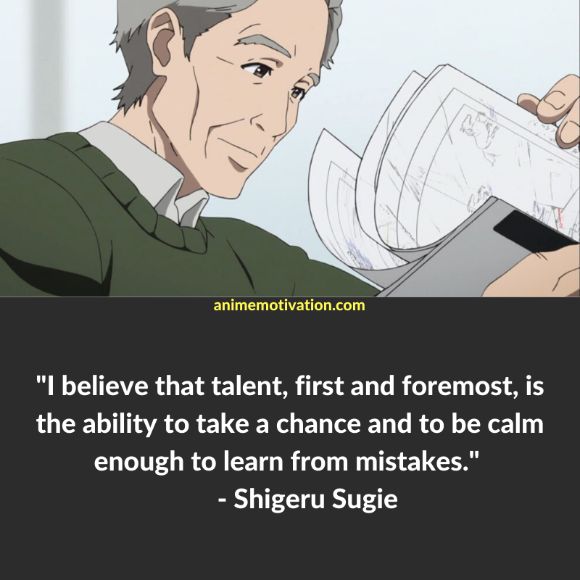 “I believe that talent, first and foremost, is the ability to take a chance and to be calm enough to learn from mistakes.” – Shigeru Sugie 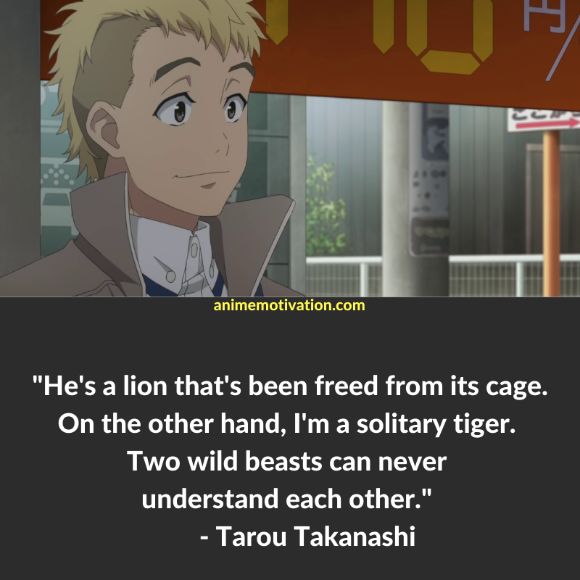 “He’s a lion that’s been freed from its cage. On the other hand, I’m a solitary tiger. Two wild beasts can never understand each other.” – Tarou Takanashi 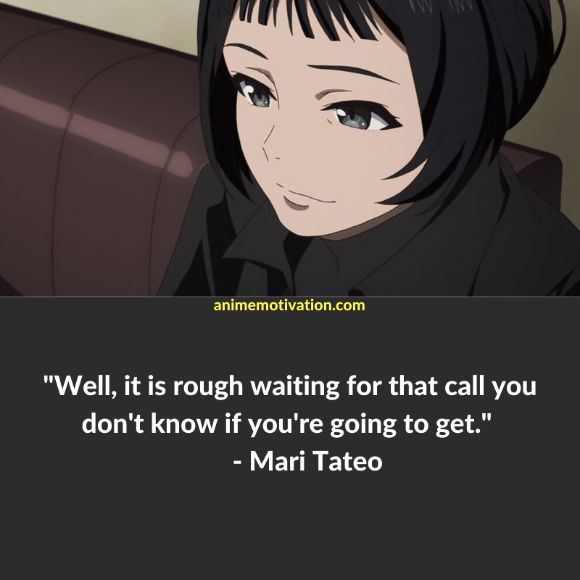 “Well, it is rough waiting for that call you don’t know if you’re going to get.” – Mari Tateo 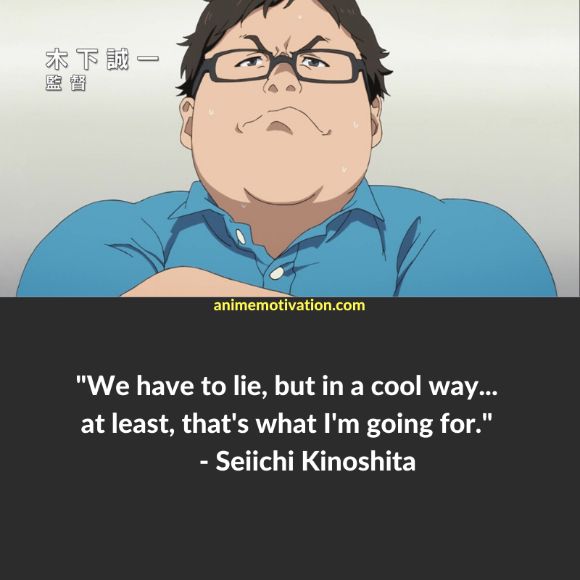 “We have to lie, but in a cool way… at least, that’s what I’m going for.” – Seiichi Kinoshita

The Ultimate List Of Rurouni Kenshin Quotes For Anime Fans

The Greatest List Of GoSick Quotes For Fans Of The Anime