Kei’s first name translates to “favor, benefit” in Japanese kanji, which plays some role in her characteristics and character overall in Classroom Of The Elite.

Seemingly cheerful, chipper, attractive, brazen, and tends to wear her school coat around her waist. She’s the kind of person who goes for what she wants shamelessly but she’s also spoiled rotten.

Like many people who put on a face, Kei has secrets she’d rather not be revealed which could be detrimental to her life at school and beyond.

She’s careful, self-aware, and more open if she trusts someone which is to be expected. And she ultimately plays a role which can be seen in her quotes from the anime.

With that said, here’s a list of Kei Karuizawa Quotes that deserve attention. 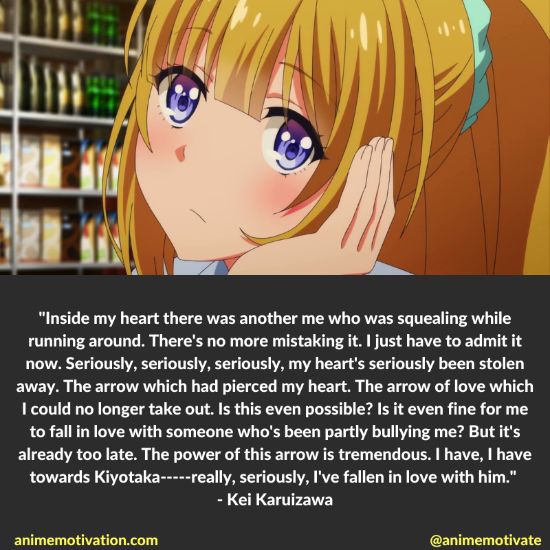 “Inside my heart there was another me who was squealing while running around. There’s no more mistaking it. I just have to admit it now. Seriously, seriously, seriously, my heart’s seriously been stolen away. The arrow which had pierced my heart. The arrow of love which I could no longer take out. Is this even possible? Is it even fine for me to fall in love with someone who’s been partly bullying me? But it’s already too late. The power of this arrow is tremendous. I have, I have towards Kiyotaka—–really, seriously, I’ve fallen in love with him.” – Kei Karuizawa 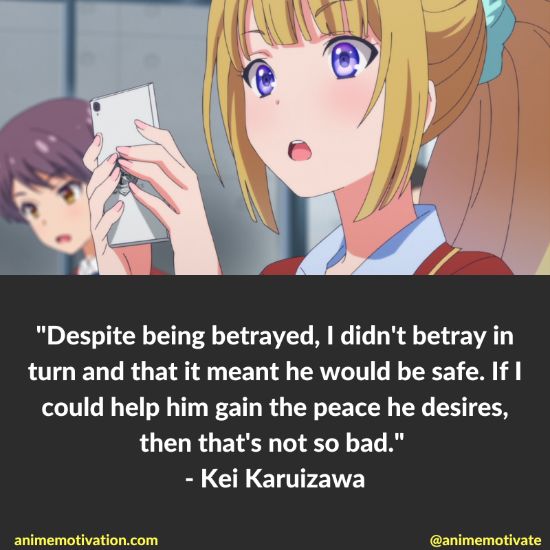 “Despite being betrayed, I didn’t betray in turn and that it meant he would be safe. If I could help him gain the peace he desires, then that’s not so bad.” – Kei Karuizawa 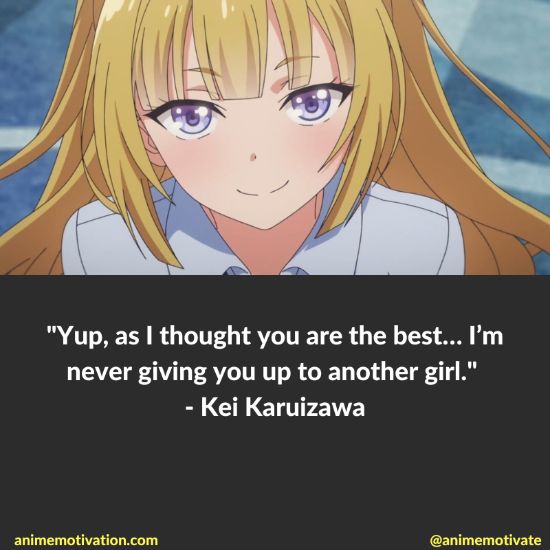 “Yup, as I thought you are the best… I’m never giving you up to another girl.” – Kei Karuizawa 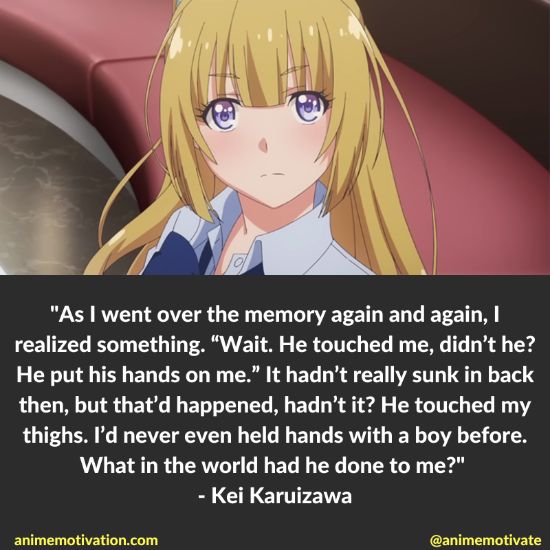 “As I went over the memory again and again, I realized something. “Wait. He touched me, didn’t he? He put his hands on me.” It hadn’t really sunk in back then, but that’d happened, hadn’t it? He touched my thighs. I’d never even held hands with a boy before. What in the world had he done to me?” – Kei Karuizawa 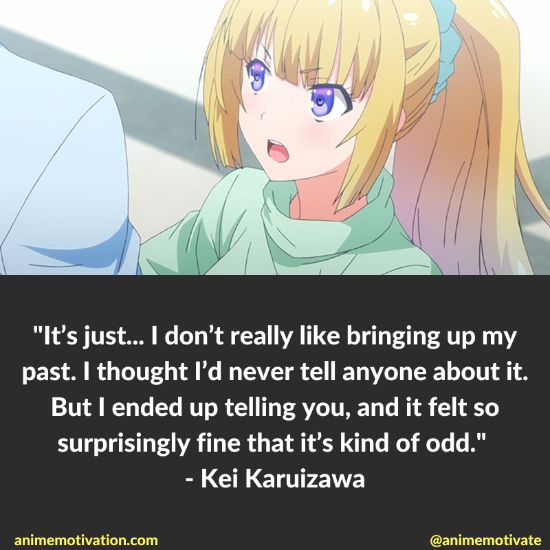 “It’s just… I don’t really like bringing up my past. I thought I’d never tell anyone about it. But I ended up telling you, and it felt so surprisingly fine that it’s kind of odd.” – Kei Karuizawa 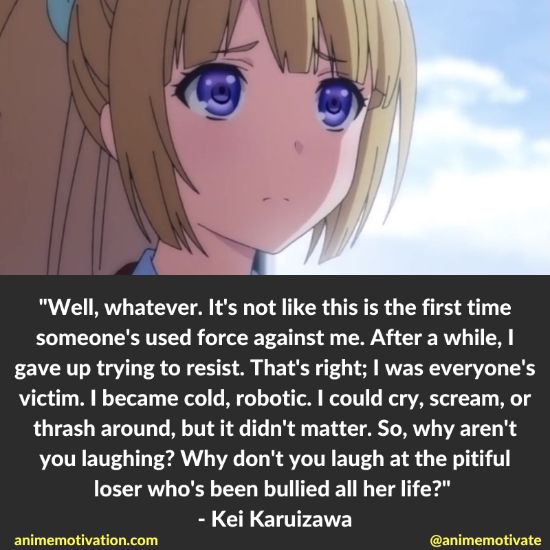 “Well, whatever. It’s not like this is the first time someone’s used force against me. After a while, I gave up trying to resist. That’s right; I was everyone’s victim. I became cold, robotic. I could cry, scream, or thrash around, but it didn’t matter. So, why aren’t you laughing? Why don’t you laugh at the pitiful loser who’s been bullied all her life?” – Kei Karuizawa 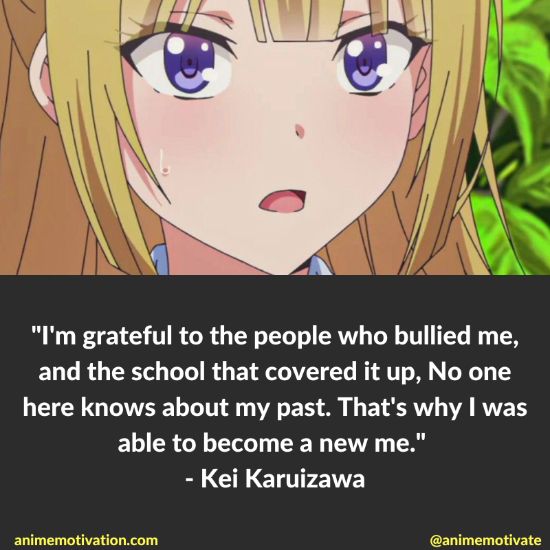 “I’m grateful to the people who bullied me, and the school that covered it up, No one here knows about my past. That’s why I was able to become a new me.” – Kei Karuizawa 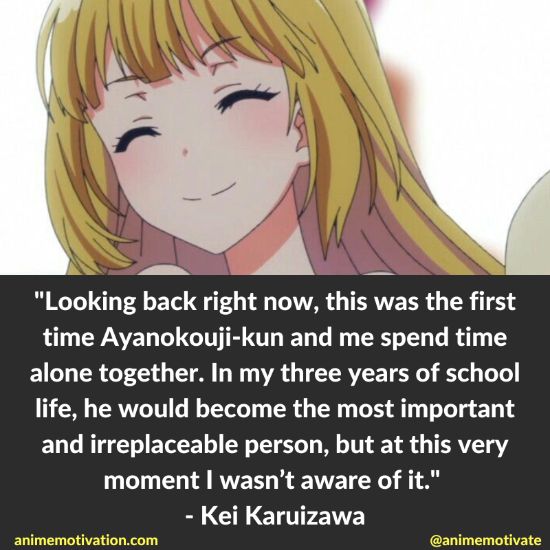 “Looking back right now, this was the first time Ayanokouji-kun and me spend time alone together. In my three years of school life, he would become the most important and irreplaceable person, but at this very moment I wasn’t aware of it.” – Kei Karuizawa 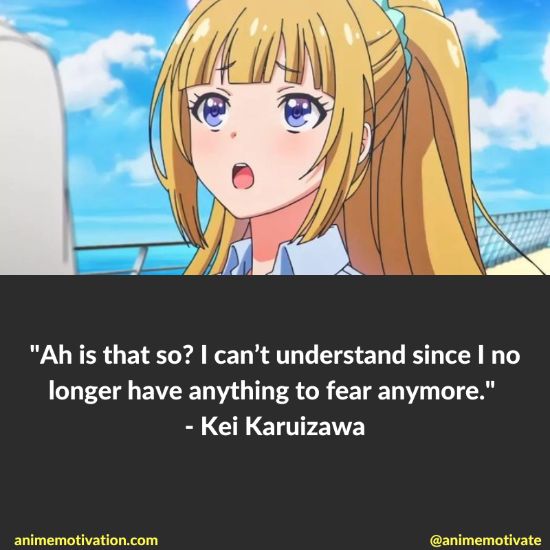 “Ah is that so? I can’t understand since I no longer have anything to fear anymore.” – Kei Karuizawa 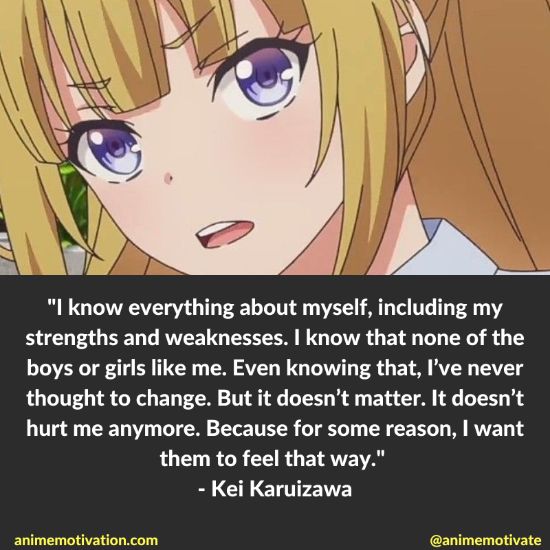 “I know everything about myself, including my strengths and weaknesses. I know that none of the boys or like me. Even knowing that, I’ve never thought to change. But it doesn’t matter. It doesn’t hurt me anymore. Because for some reason, I want them to feel that way.” – Kei Karuizawa 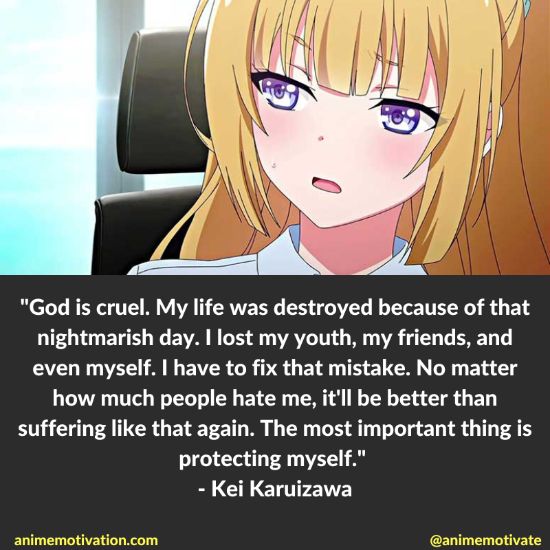 “God is cruel. My life was destroyed because of that nightmarish day. I lost my youth, my friends, and even myself. I have to fix that mistake. No matter how much people hate me, it’ll be better than suffering like that again. The most important thing is protecting myself.” – Kei Karuizawa 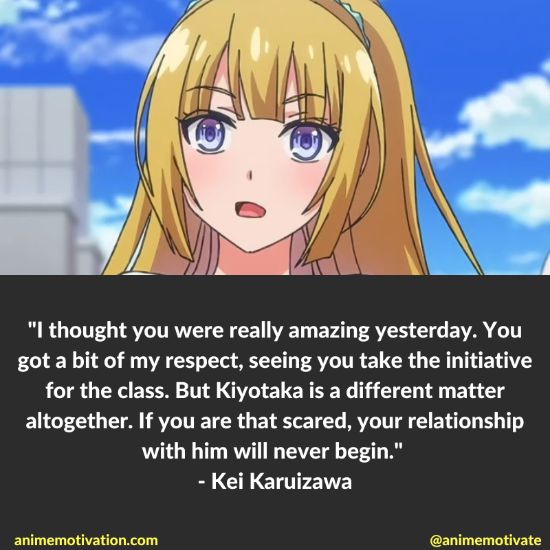 “I thought you were really amazing yesterday. You got a bit of my respect, seeing you take the initiative for the class. But Kiyotaka is a different matter altogether. If you are that scared, your relationship with him will never begin.” – Kei Karuizawa 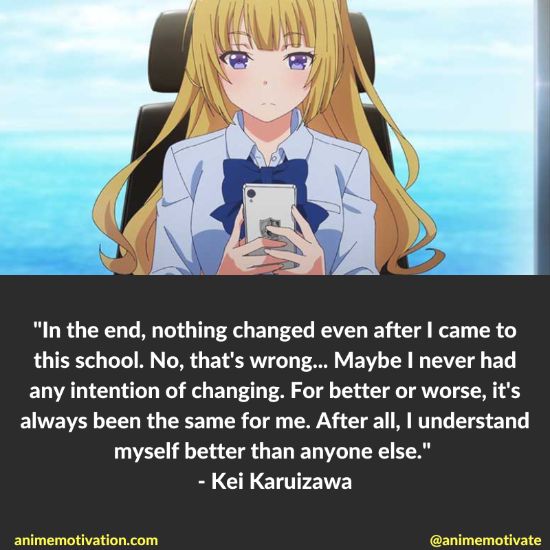 “In the end, nothing changed even after I came to this school. No, that’s wrong… Maybe I never had any intention of changing. For better or worse, it’s always been the same for me. After all, I understand myself better than anyone else.” – Kei Karuizawa 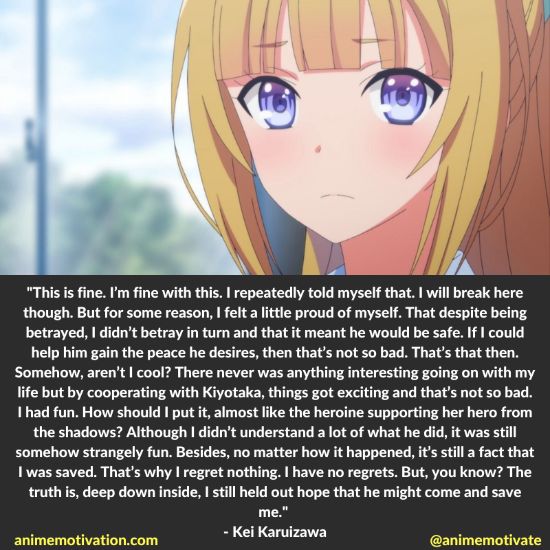 “This is fine. I’m fine with this. I repeatedly told myself that. I will break here though. But for some reason, I felt a little proud of myself. That despite being betrayed, I didn’t betray in turn and that it meant he would be safe. If I could help him gain the peace he desires, then that’s not so bad. That’s that then. Somehow, aren’t I cool? There never was anything interesting going on with my life but by cooperating with Kiyotaka, things got exciting and that’s not so bad. I had fun. How should I put it, almost like the heroine supporting her hero from the shadows? Although I didn’t understand a lot of what he did, it was still somehow strangely fun. Besides, no matter how it happened, it’s still a fact that I was saved. That’s why I regret nothing. I have no regrets. But, you know? The truth is, deep down inside, I still held out hope that he might come and save me.” – Kei Karuizawa

14+ Best Anime Quotes About Being Grateful You Can Learn From!