FLCL is a classic series by today’s standards. An underground that new fans may not know of, but has definitely made its mark in history.

Without getting into too much detail, here are the BEST FLCL quotes for fans of the series.

Some will bring back memories, and others will make you chuckle at the silliness of it. 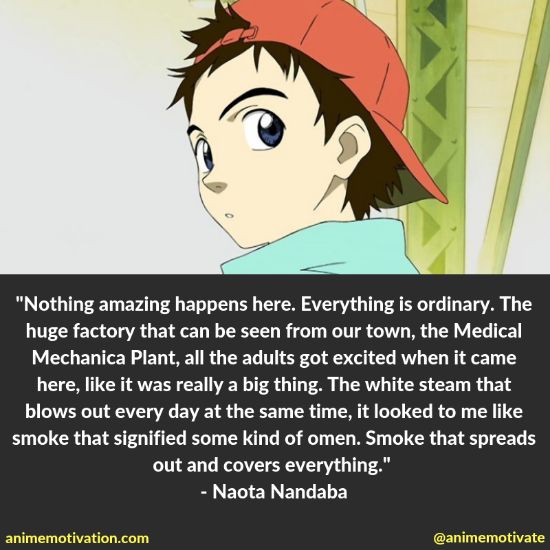 “Nothing amazing happens here. Everything is ordinary. The huge factory that can be seen from our town, the Medical Mechanica Plant, all the adults got excited when it came here, like it was really a big thing. The white steam that blows out every day at the same time, it looked to me like smoke that signified some kind of omen. Smoke that spreads out and covers everything.” – Naota Nandaba 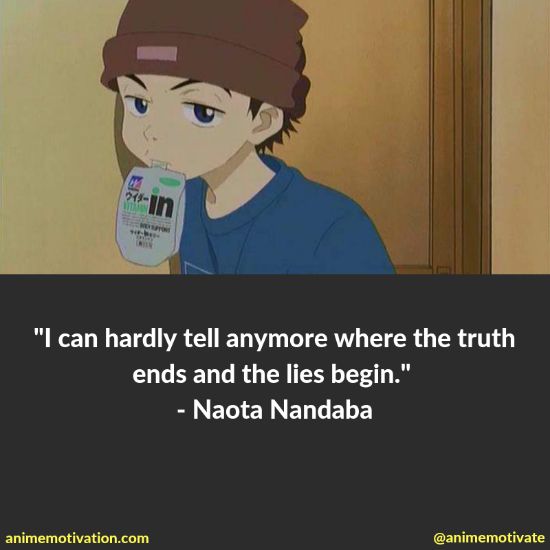 “I can hardly tell anymore where the truth ends and the lies begin.” – Naota Nandaba 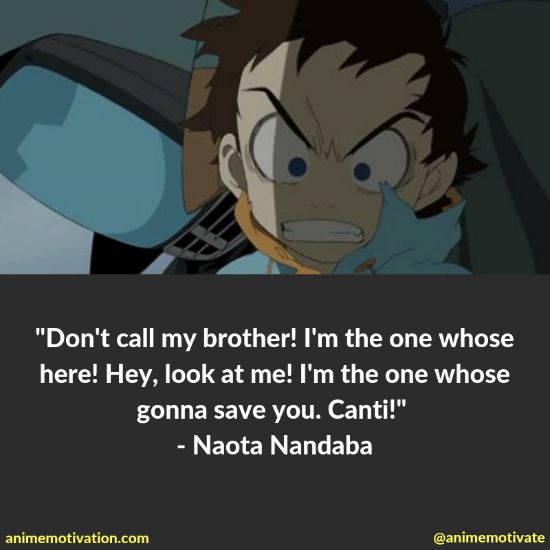 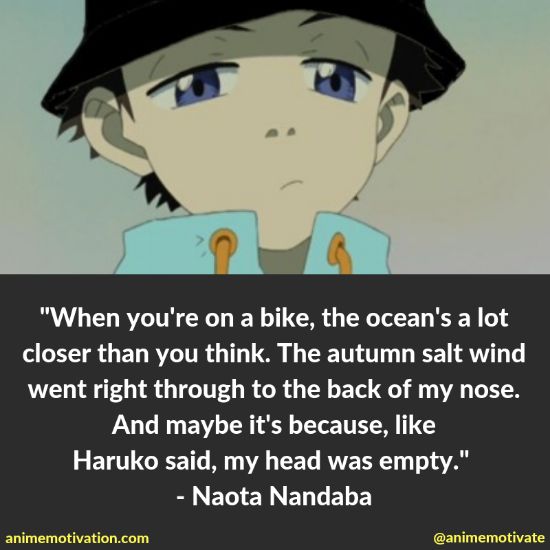 “When you’re on a bike, the ocean’s a lot closer than you think. The autumn salt wind went right through to the back of my nose. And maybe it’s because, like Haruko said, my head was empty.” – Naota Nandaba 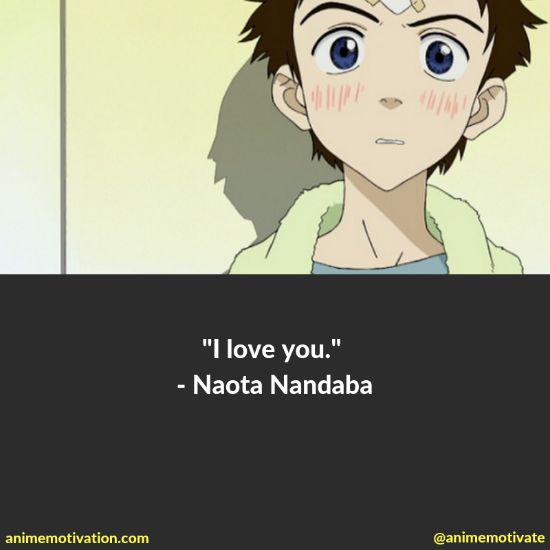 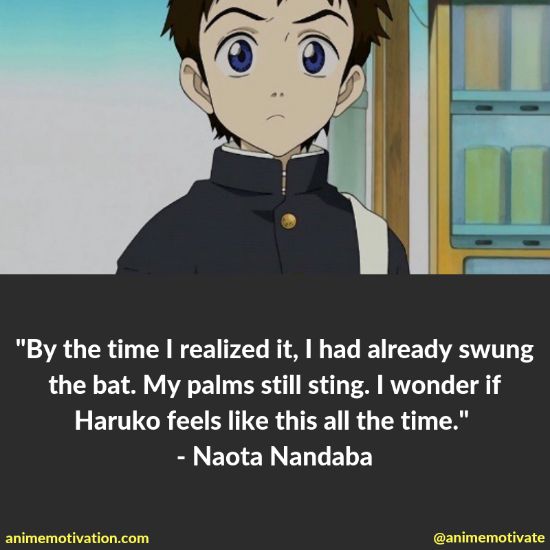 “By the time I realized it, I had already swung the bat. My palms still sting. I wonder if Haruko feels like this all the time.” – Naota Nandaba 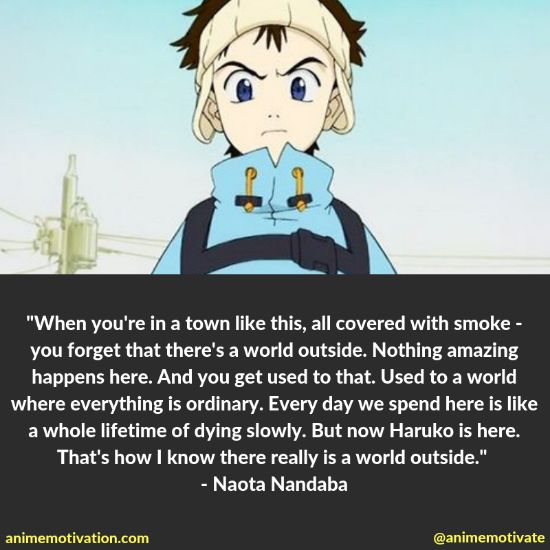 “When you’re in a town like this, all covered with smoke – you forget that there’s a world outside. Nothing amazing happens here. And you get used to that. Used to a world where everything is ordinary. Every day we spend here is like a whole lifetime of dying slowly. But now Haruko is here. That’s how I know there really is a world outside.” – Naota Nandaba 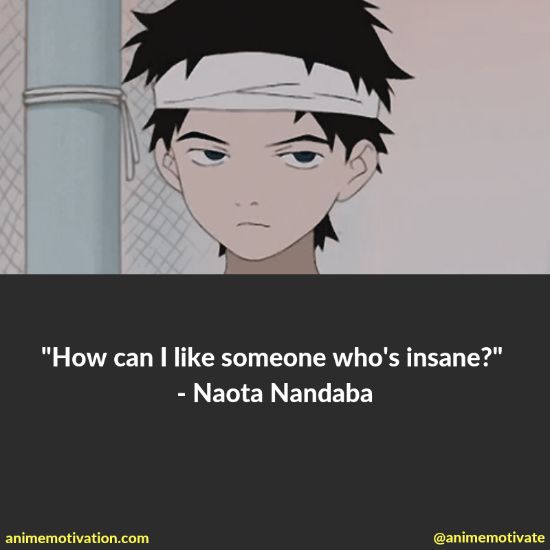 “How can I like someone who’s insane?” – Naota Nandaba 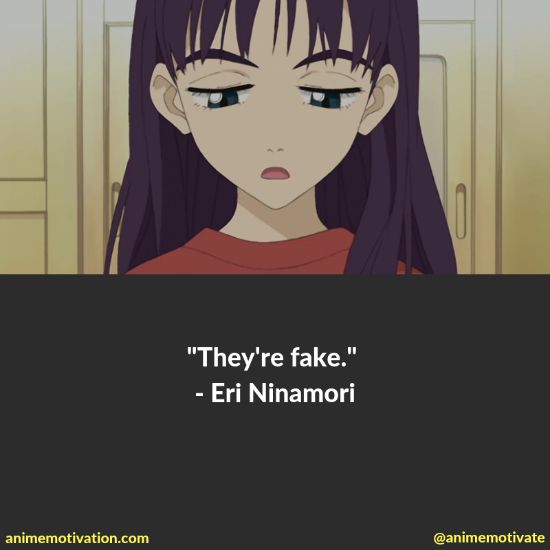 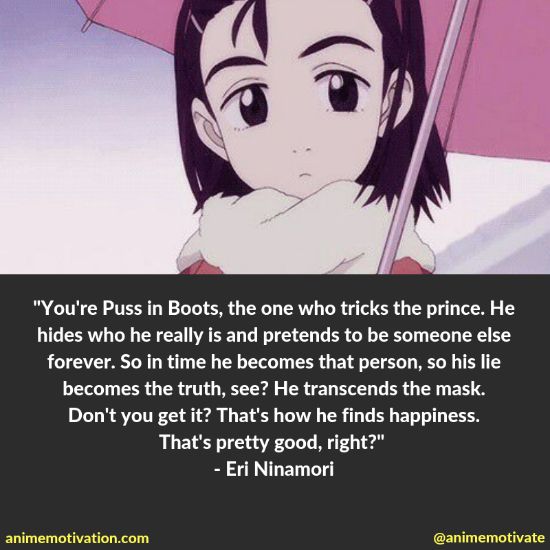 “You’re Puss in Boots, the one who tricks the prince. He hides who he really is and pretends to be someone else forever. So in time he becomes that person, so his lie becomes the truth, see? He transcends the mask. Don’t you get it? That’s how he finds happiness. That’s pretty good, right?” – Eri Ninamori 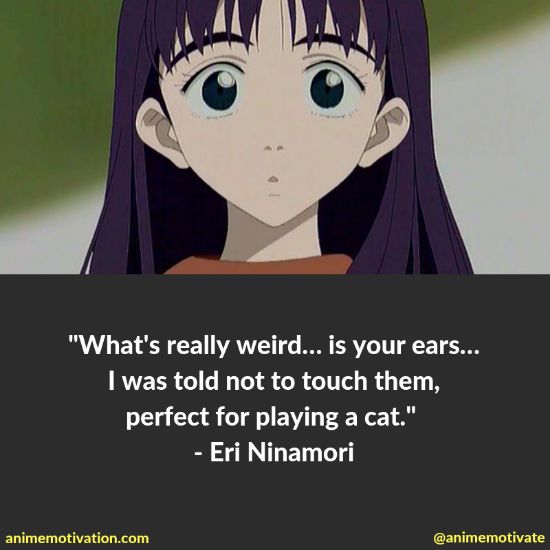 “What’s really weird… is your ears… I was told not to touch them, perfect for playing a cat.” – Eri Ninamori 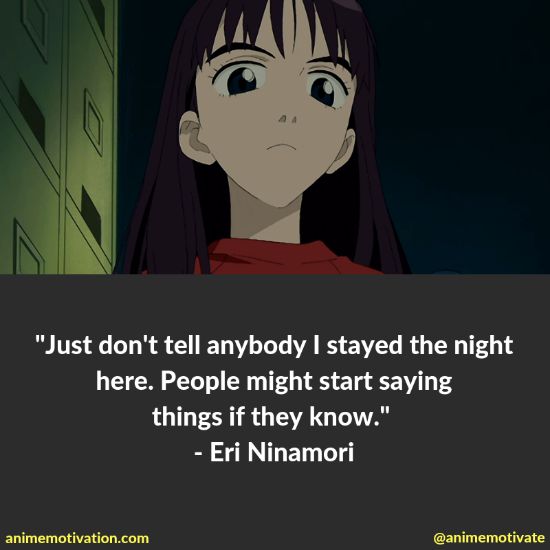 “Just don’t tell anybody I stayed the night here. People might start saying things if they know.” – Eri Ninamori 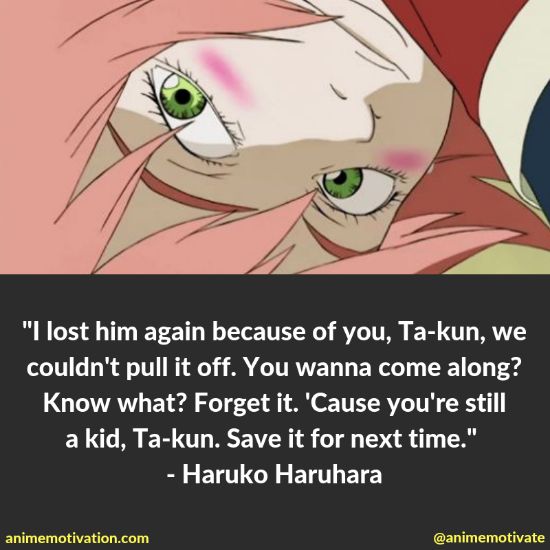 “I lost him again because of you, Ta-kun, we couldn’t pull it off. You wanna come along? Know what? Forget it. ‘Cause you’re still a kid, Ta-kun. Save it for next time.” – Haruko Haruhara 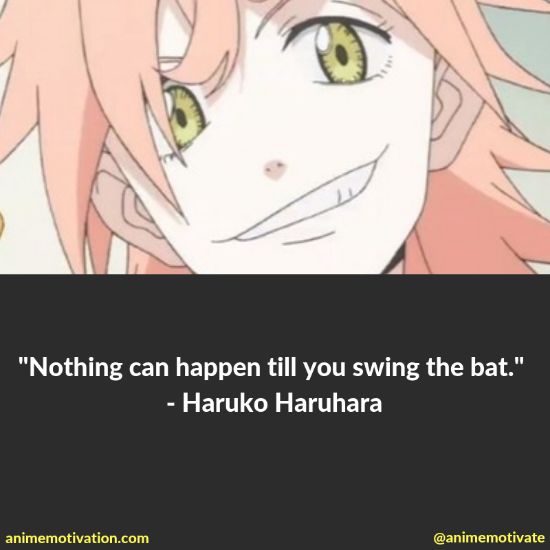 “Nothing can happen till you swing the bat.” – Haruko Haruhara 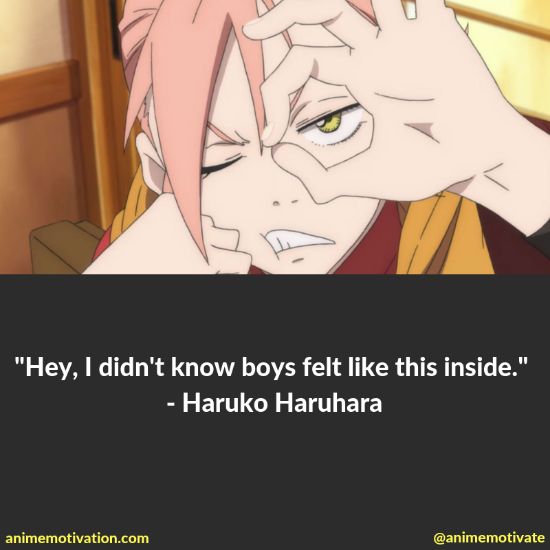 “Hey, I didn’t know boys felt like this inside.” – Haruko Haruhara 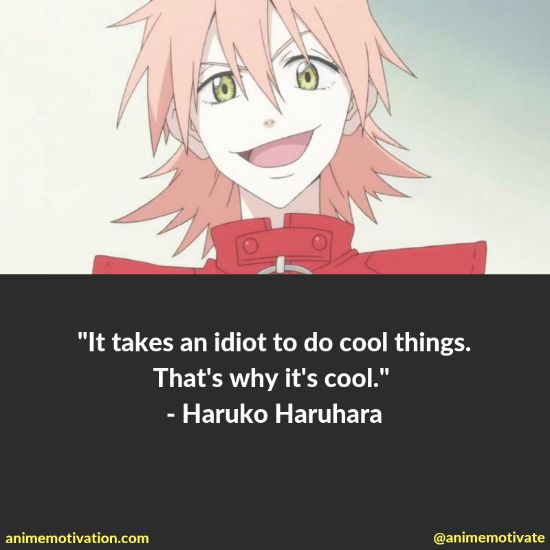 “It takes an idiot to do cool things. That’s why it’s cool.” – Haruko Haruhara 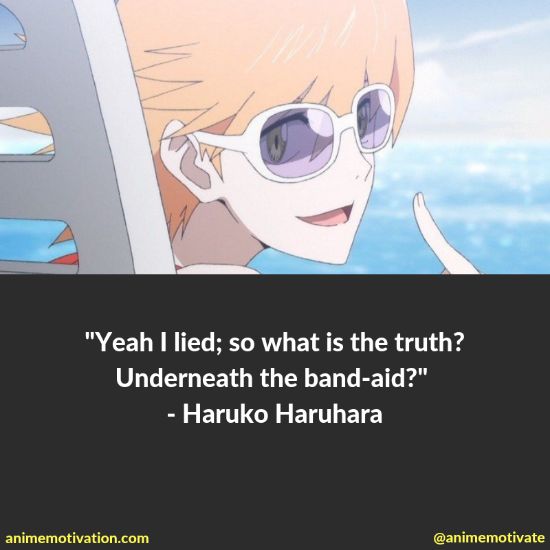 “Yeah I lied; so what is the truth? Underneath the band-aid?” – Haruko Haruhara 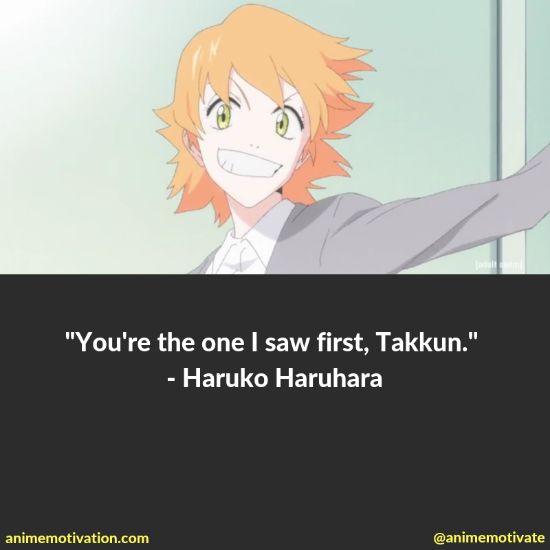 “You’re the one I saw first, Takkun.” – Haruko Haruhara 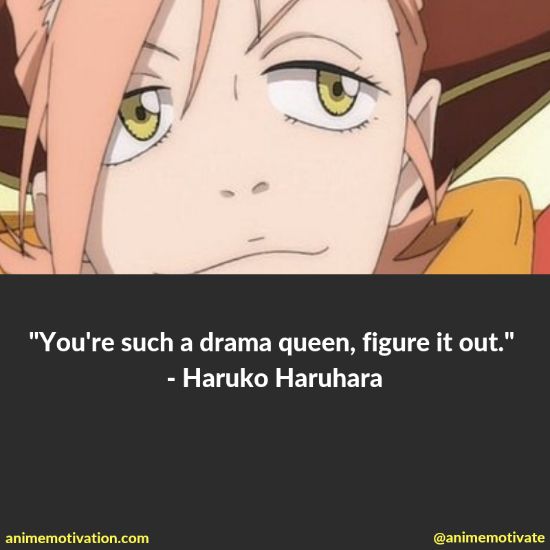 “You’re such a drama queen, figure it out.” – Haruko Haruhara 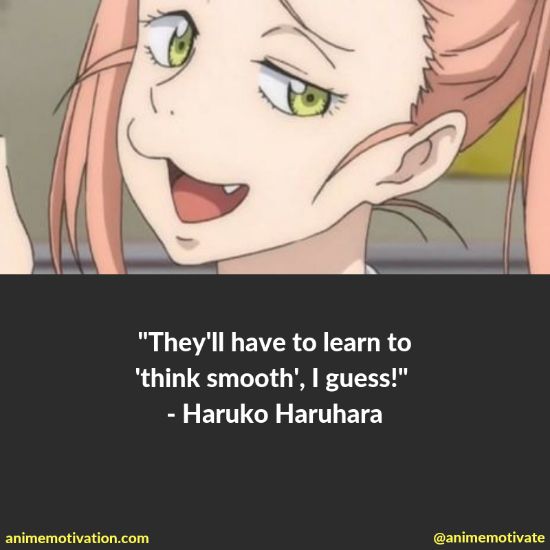 “They’ll have to learn to ‘think smooth’, I guess!” – Haruko Haruhara 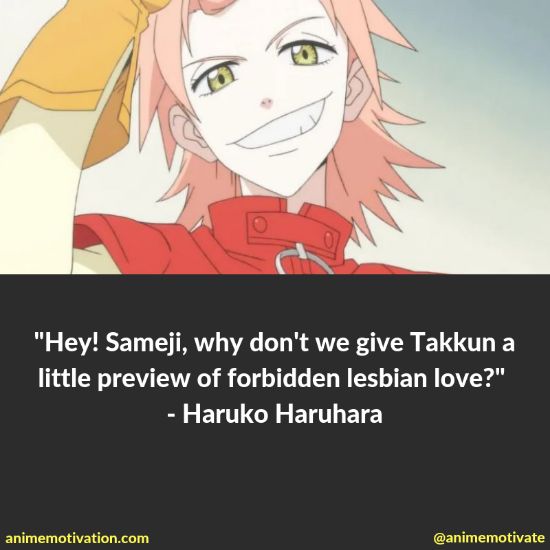 “Hey! Sameji, why don’t we give Takkun a little preview of forbidden lesbian love?” – Haruko Haruhara 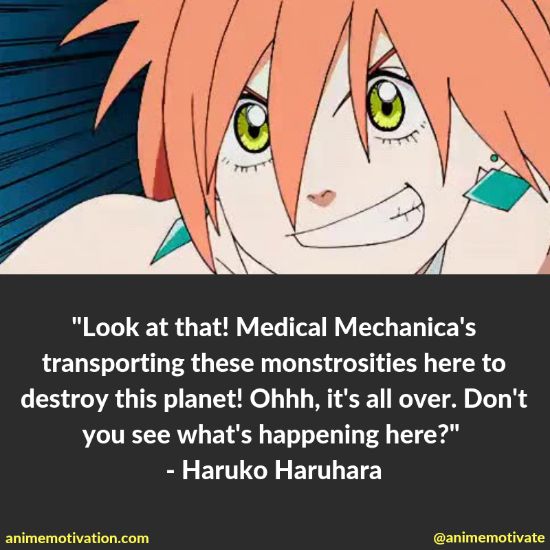 “Look at that! Medical Mechanica’s transporting these monstrosities here to destroy this planet! Ohhh, it’s all over. Don’t you see what’s happening here?” – Haruko Haruhara “Watermelon. Or like a panda with a mean face, or like sandals with pressure points drawn on them, or the smell of a blackboard eraser, or a Sunday morning where you wake up and it’s raining. Well, I like him more than hard bread.” – Mamimi Samejima 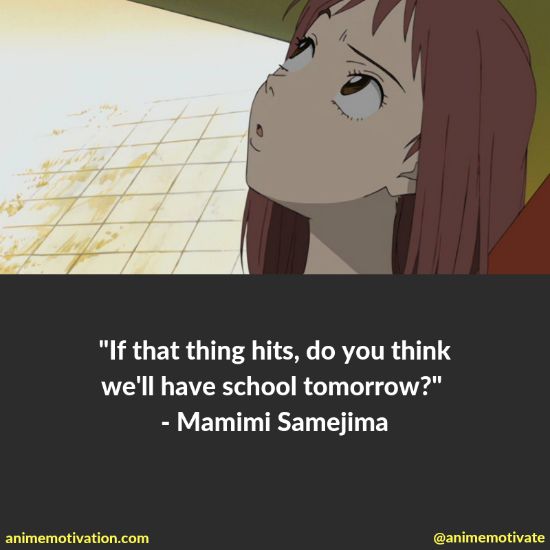 “If that thing hits, do you think we’ll have school tomorrow?” – Mamimi Samejima 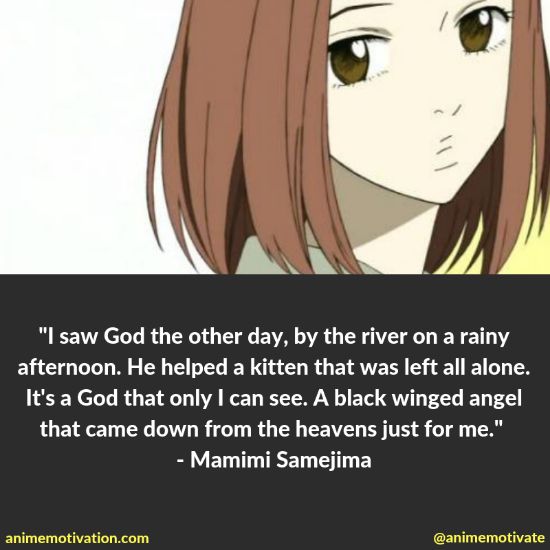 “I saw God the other day, by the river on a rainy afternoon. He helped a kitten that was left all alone. It’s a God that only I can see. A black winged angel that came down from the heavens just for me.” – Mamimi Samejima 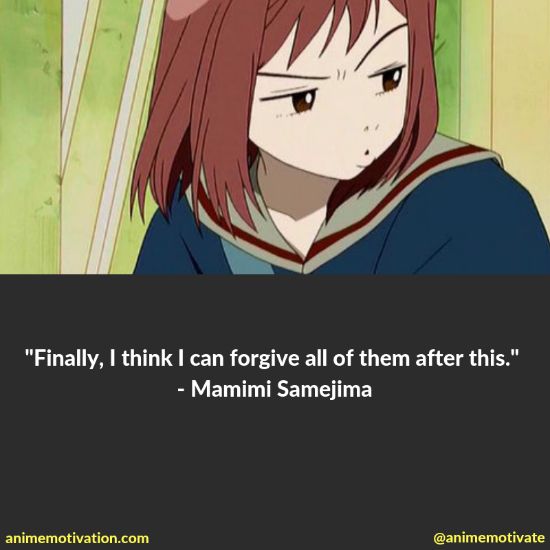 “Finally, I think I can forgive all of them after this.” – Mamimi Samejima 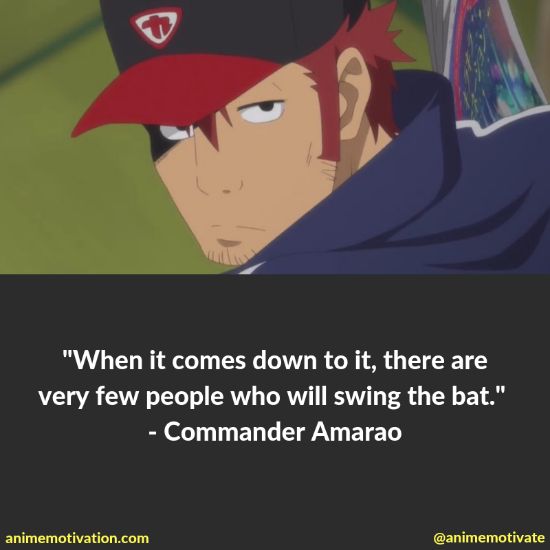 “When it comes down to it, there are very few people who will swing the bat.” – Commander Amarao 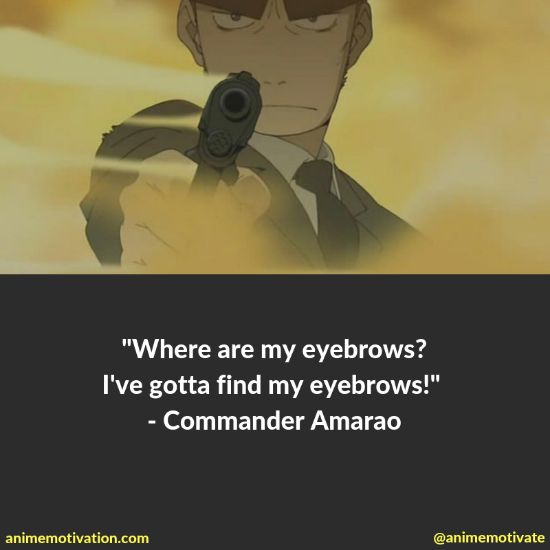 “Where are my eyebrows? I’ve gotta find my eyebrows!” – Commander Amarao 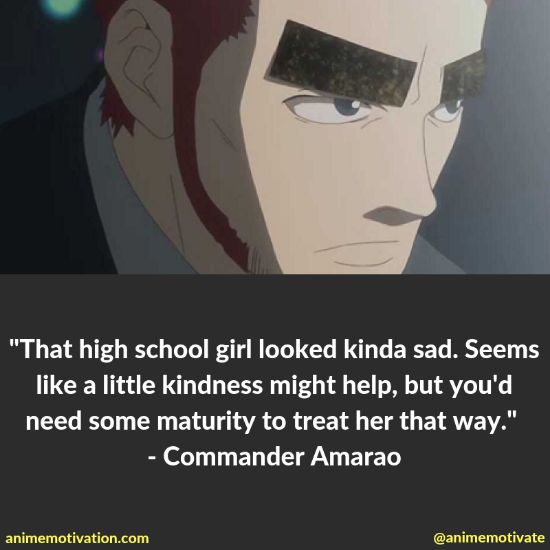 “That high school girl looked kinda sad. Seems like a little kindness might help, but you’d need some maturity to treat her that way.” – Commander Amarao

53+ Of The BEST Avatar: The Last Airbender Quotes

A Collection Of Memorable Quotes From Golden Time