Diabolik Lovers is a shoujo/vampire series, made by the same studio as “The Legend Of The Legendary Heroes”.

The harems in this influence the dynamics, and that plays a role in the quotes centered around romance, despair, and hostility. 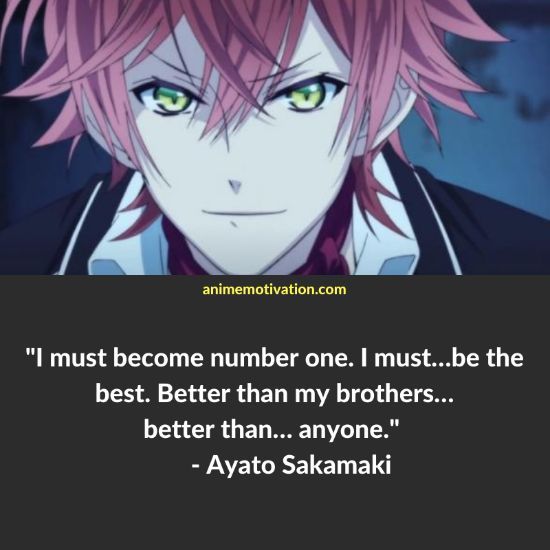 “I must become number one. I must…be the best. Better than my brothers…better than…anyone.” – Ayato Sakamaki 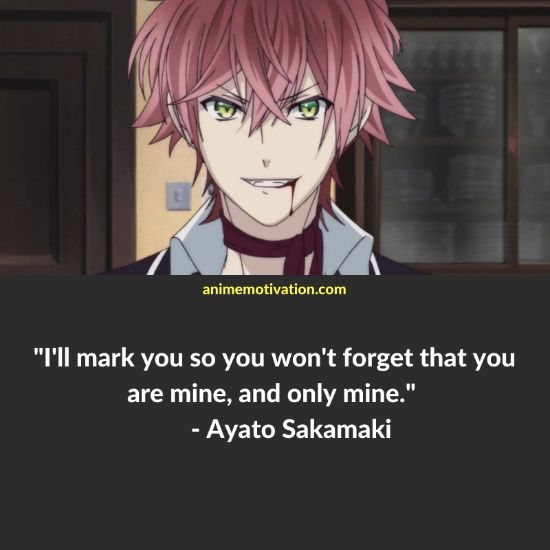 “I’ll mark you so you won’t forget that you are mine, and only mine.” – Ayato Sakamaki 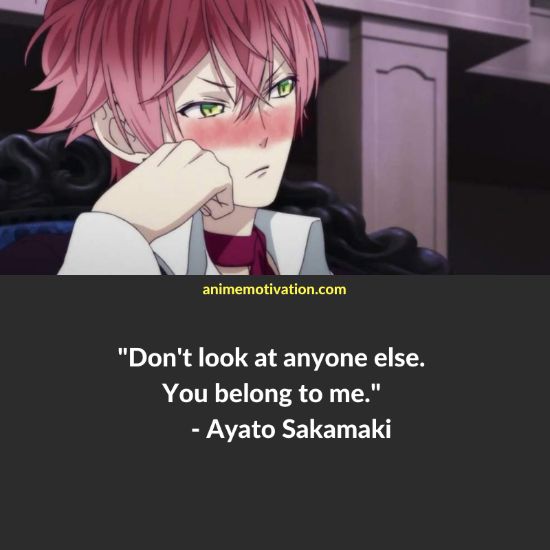 “Don’t look at anyone else. You belong to me.” – Ayato Sakamaki 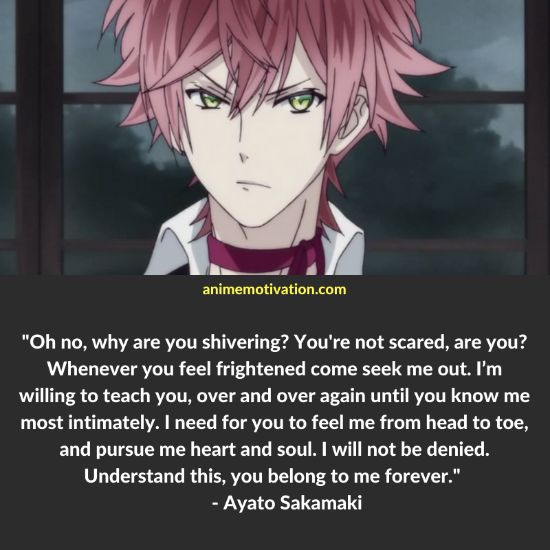 “Oh no, why are you shivering? You’re not scared, are you? Whenever you feel frightened come seek me out. I’m willing to teach you, over and over again until you know me most intimately. I need for you to feel me from head to toe, and pursue me heart and soul. I will not be denied. Understand this, you belong to me forever.” – Ayato Sakamaki

“I take all that I want and all that I see. It’s a ruler’s prerogative to torture his conquests, isn’t it? I watch you inevitably spiral towards a dead end. Fall until you can fall no further, and cry.” – Ayato Sakamaki 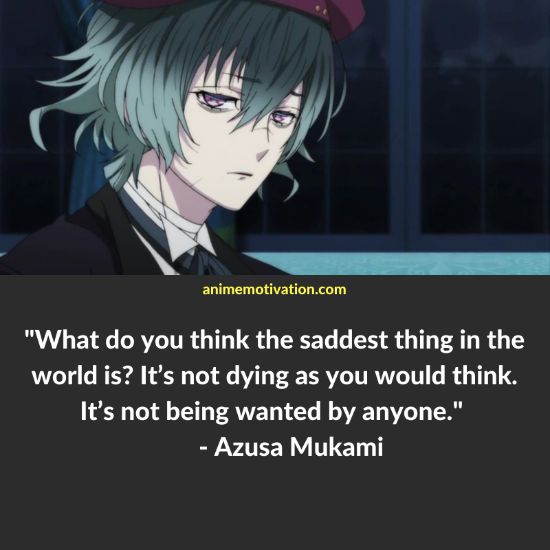 “What do you think the saddest thing in the world is? It’s not dying as you would think. It’s not being wanted by anyone.” – Azusa Mukami 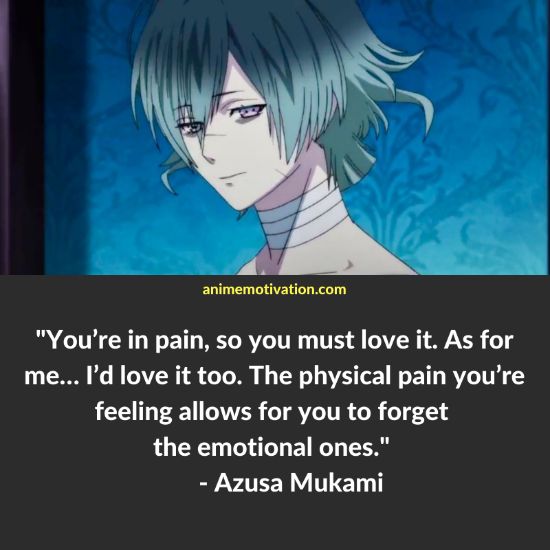 “You’re in pain, so you must love it. As for me… I’d love it too. The physical pain you’re feeling allows for you to forget the emotional ones.” – Azusa Mukami 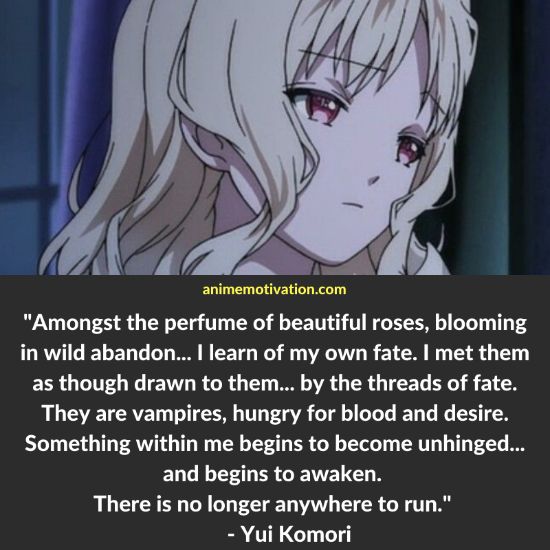 “Amongst the perfume of beautiful roses, blooming in wild abandon… I learn of my own fate. I met them as though drawn to them… by the threads of fate. They are vampires, hungry for blood and desire. Something within me begins to become unhinged… and begins to awaken. There is no longer anywhere to run.” – Yui Komori 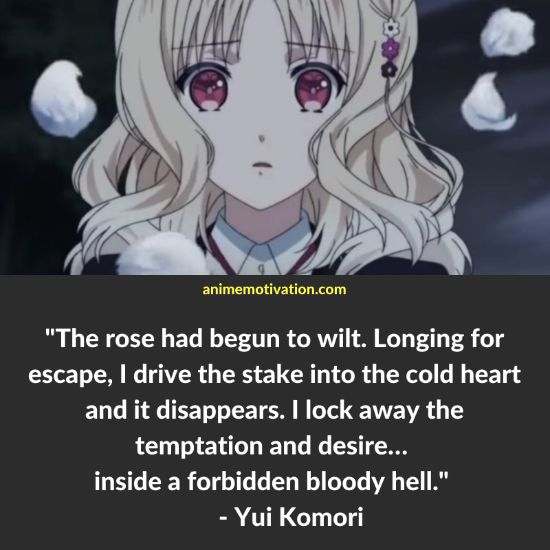 “The rose had begun to wilt. Longing for escape, I drive the stake into the cold heart and it disappears. I lock away the temptation and desire… inside a forbidden bloody hell.” – Yui Komori 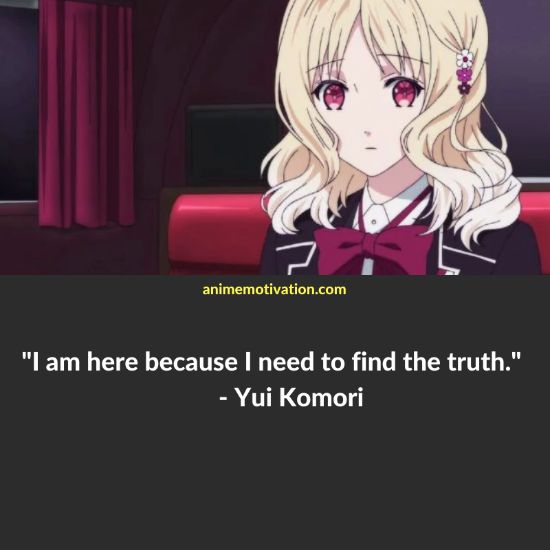 “I am here because I need to find the truth.” – Yui Komori 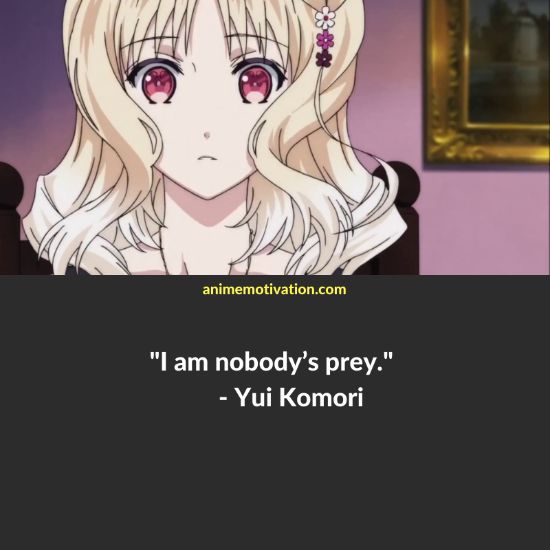 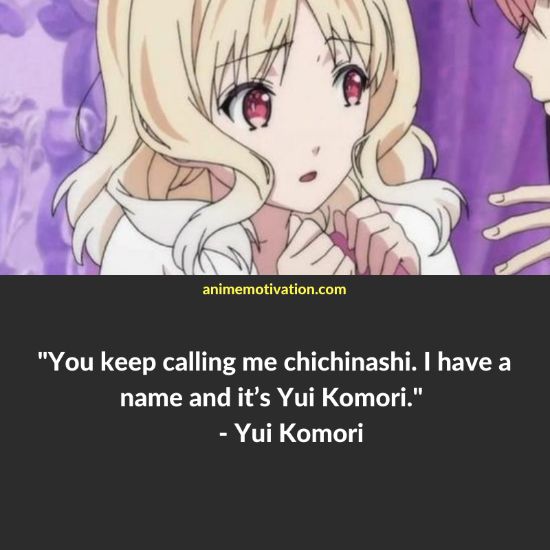 “You keep calling me chichinashi. I have a name and it’s Yui Komori.” – Yui Komori 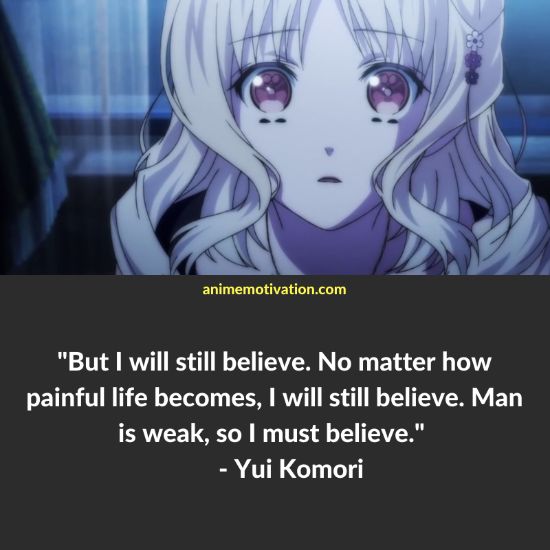 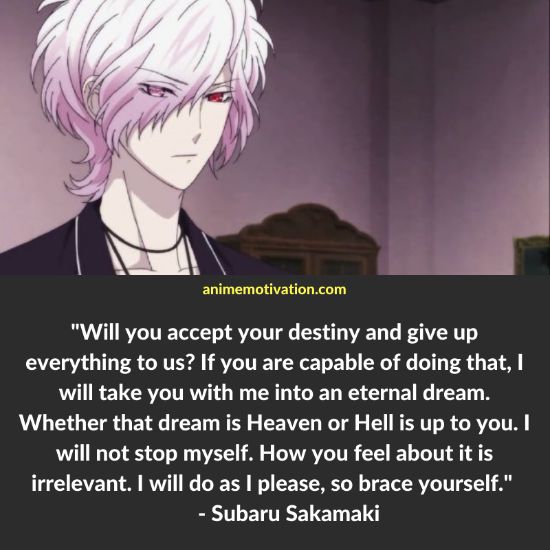 “Will you accept your destiny and give up everything to us? If you are capable of doing that, I will take you with me into an eternal dream. Whether that dream is Heaven or Hell is up to you. I will not stop myself. How you feel about it is irrelevant. I will do as I please, so brace yourself.” – Subaru Sakamaki 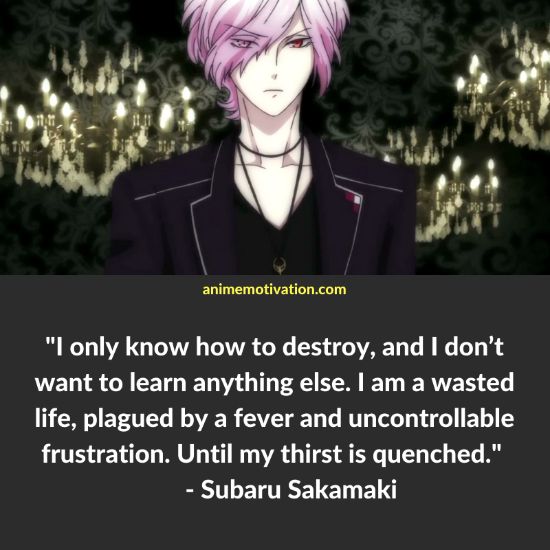 “I only know how to destroy, and I don’t want to learn anything else. I am a wasted life, plagued by a fever and uncontrollable frustration. Until my thirst is quenched.” – Subaru Sakamaki 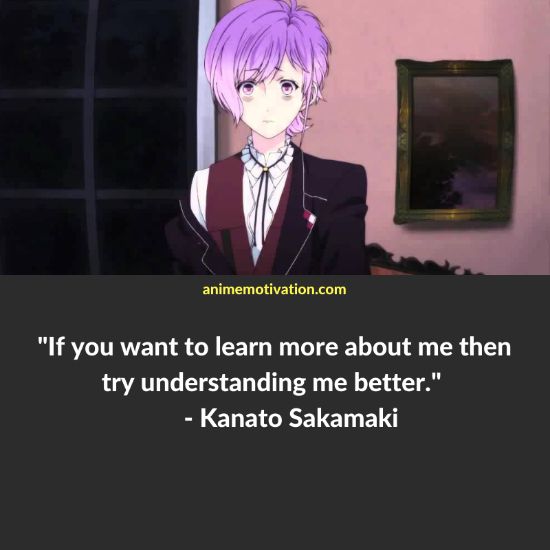 “If you want to learn more about me then try understanding me better.” – Kanato Sakamaki 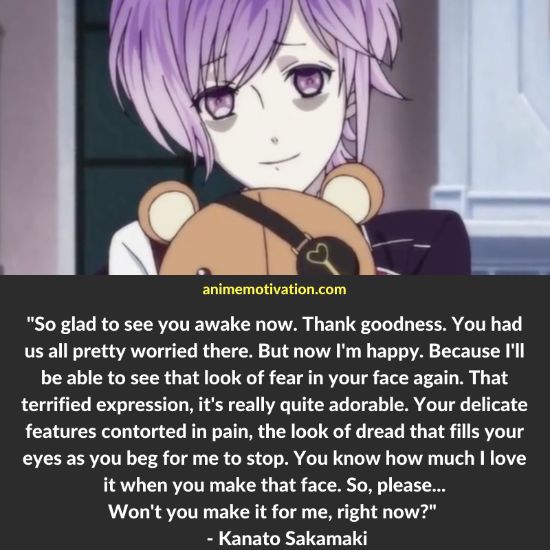 “So glad to see you awake now. Thank goodness. You had us all pretty worried there. But now I’m happy. Because I’ll be able to see that look of fear in your face again. That terrified expression, it’s really quite adorable. Your delicate features contorted in pain, the look of dread that fills your eyes as you beg for me to stop. You know how much I love it when you make that face. So, please…Won’t you make it for me, right now?” – Kanato Sakamaki 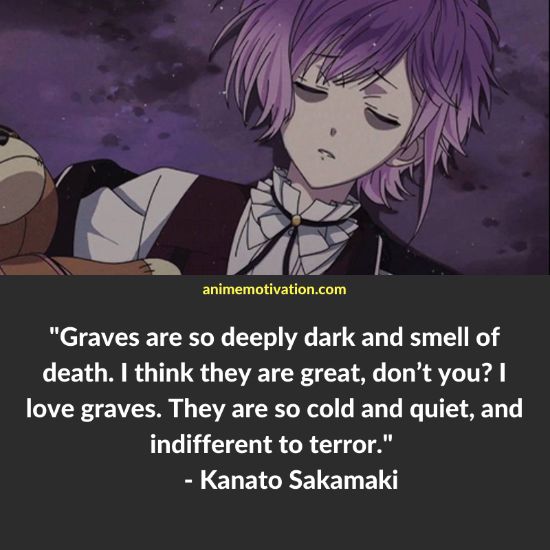 “Graves are so deeply dark and smell of death. I think they are great, don’t you? I love graves. They are so cold and quiet, and indifferent to terror. ” – Kanato Sakamaki 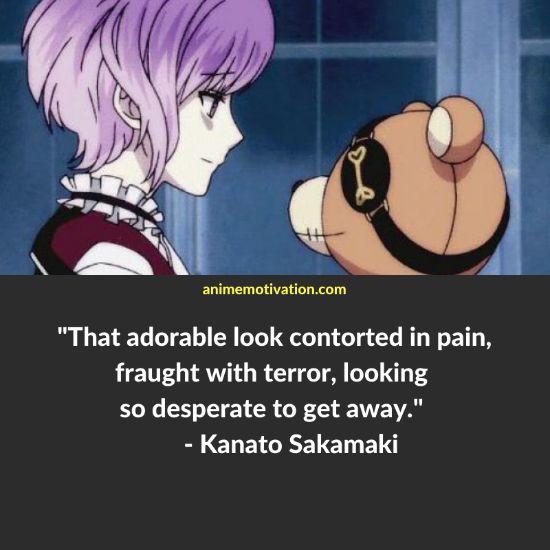 “That adorable look contorted in pain, fraught with terror, looking so desperate to get away.” – Kanato Sakamaki 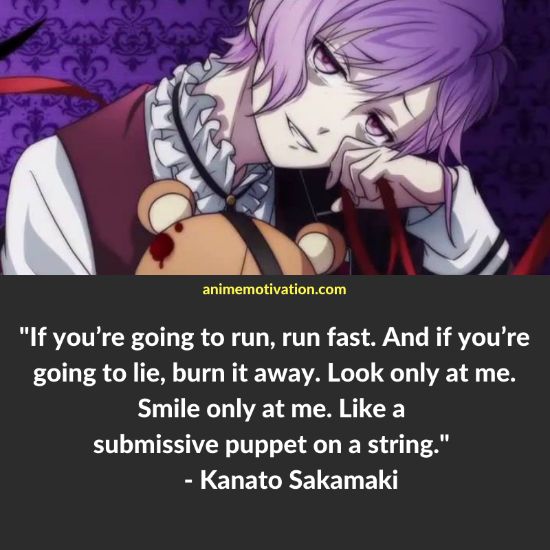 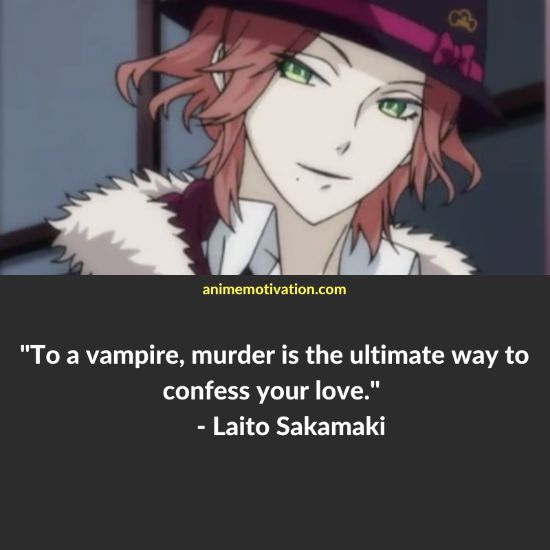 “To a vampire, murder is the ultimate way to confess your love.” – Laito Sakamaki 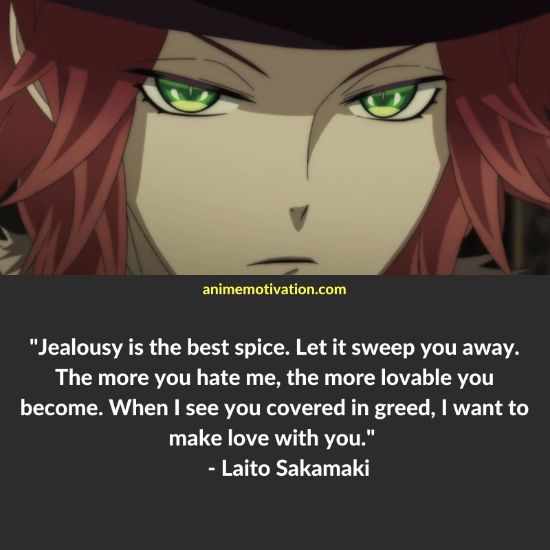 “Jealousy is the best spice. Let it sweep you away. The more you hate me, the more lovable you become. When I see you covered in greed, I want to make love with you.” – Laito Sakamaki 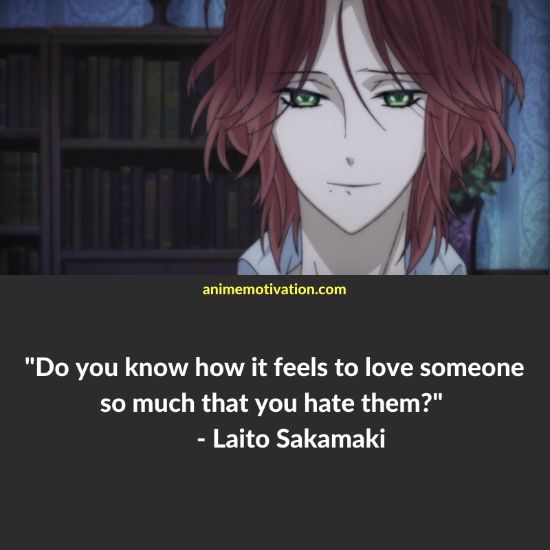 “Do you know how it feels to love someone so much that you hate them?” – Laito Sakamaki 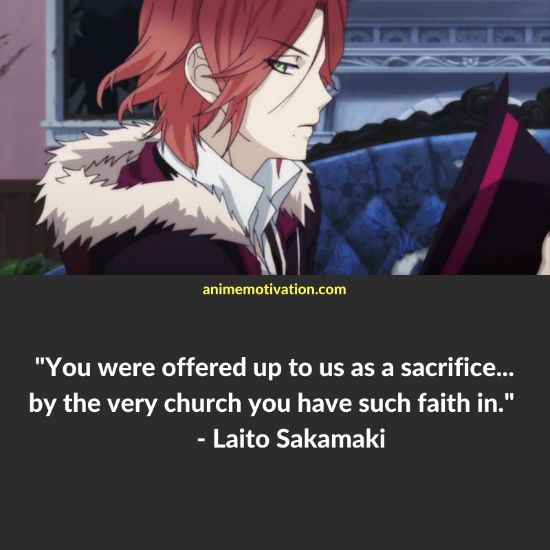 “You were offered up to us as a sacrifice… by the very church you have such faith in.” – Laito Sakamaki 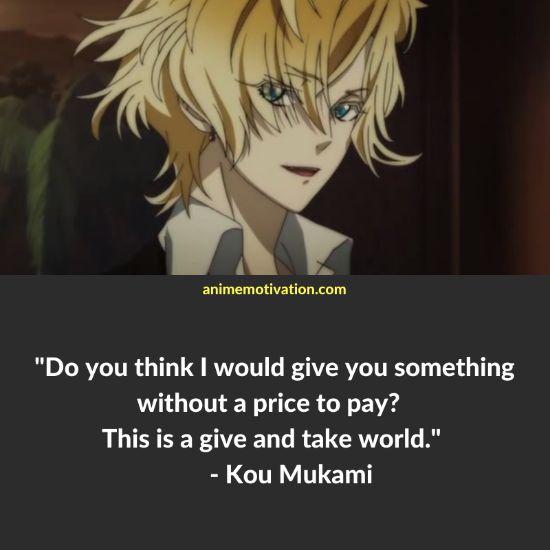 “Do you think I would give you something without a price to pay?  This is a give and take world.” – Kou Mukami

The 14+ Best Ping Pong The Animation Quotes Fans Will Love