Trigun on the surface is a goofy anime series with a goofy main character. Who seems to do nothing but clown around and not take things seriously.

But under the surface their are some deep elements, and even deeper quotes to match.

Let’s dive into those quotes to give you some inspiration and even a fresh perspective on life. 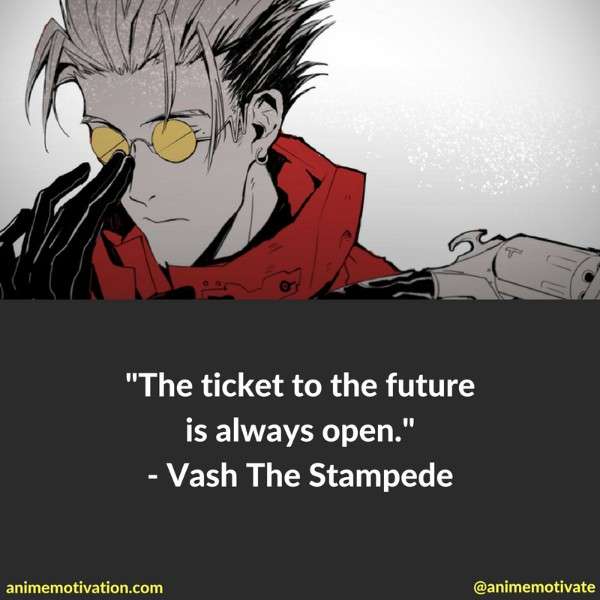 “The ticket to the future is always open.” – Vash The Stampede

There’s always a chance to change where you’re going. 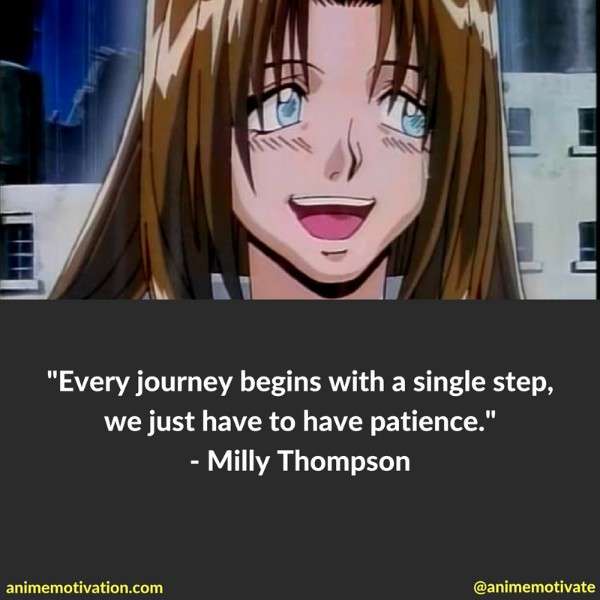 “Every journey begins with a single step. We just have to have patience.” – Milly Thompson

It sure does! One step beats doing nothing at all. 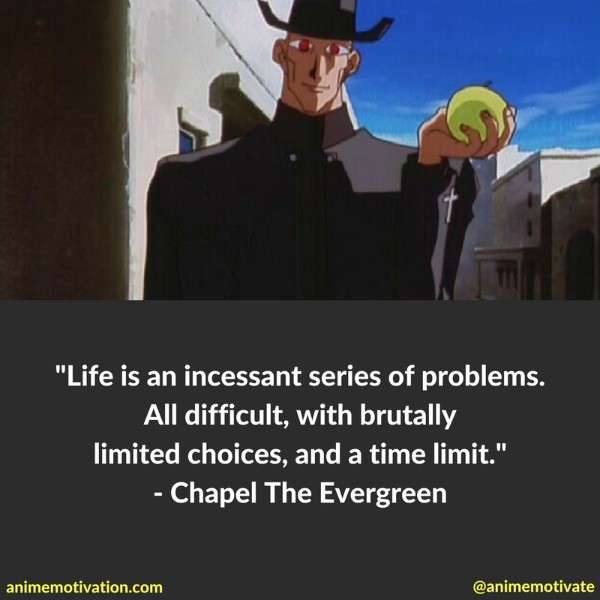 “Life is an incessant series of problems… All difficult, with brutally limited choices… and a time limit.” – Chapel The Evergreen

It’s like the game of life is a race against time itself. 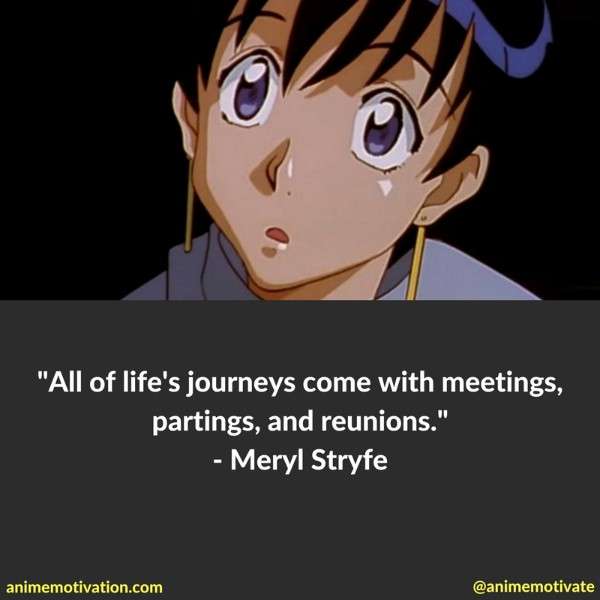 “All of life’s journeys come with meetings, partings, and reunions.” – Meryl Stryfe 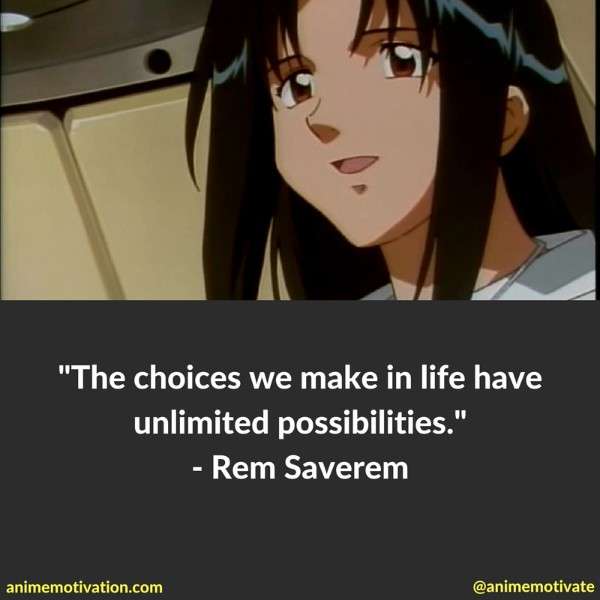 “The choices we make in life have unlimited possibilities.” – Rem Saverem 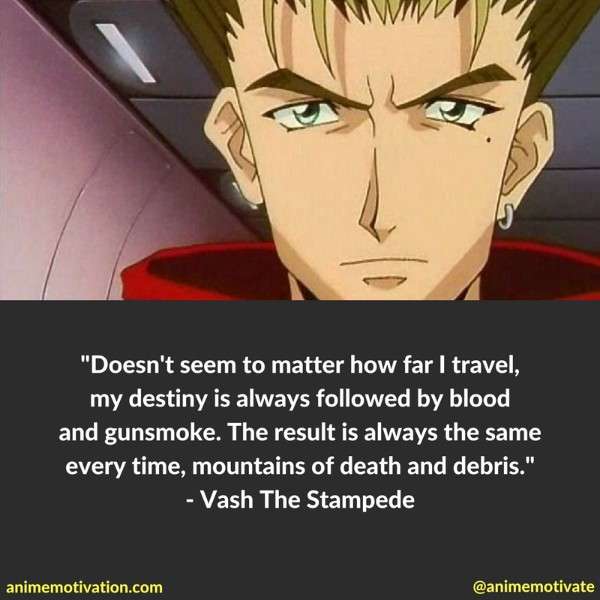 “Doesn’t seem to matter how far I travel, my destiny is always followed by blood and gunsmoke. The result is always the same every time, mountains of death and debris.” – Vash The Stampede 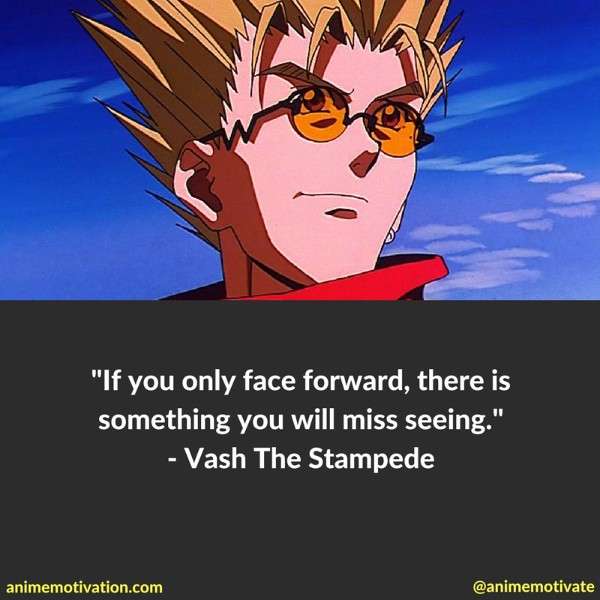 “If you only face forward, there is something you will miss seeing.” – Vash The Stampede 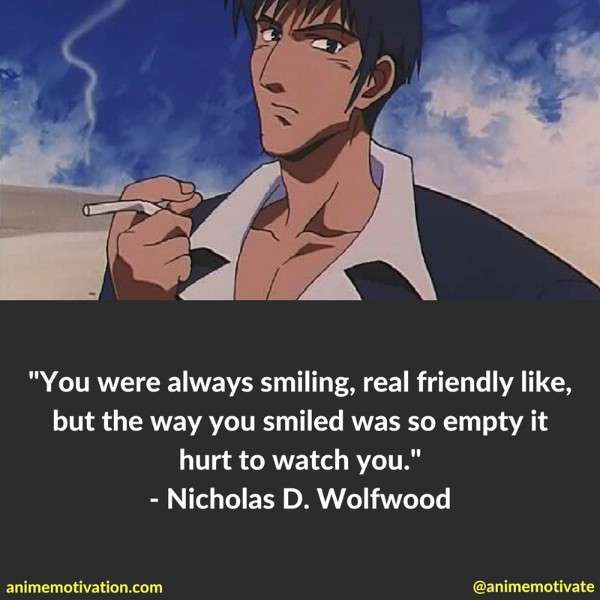 “You were always smiling, real friendly like, but the way you smiled was so empty it hurt to watch you.” – Nicholas D. Wolfwood 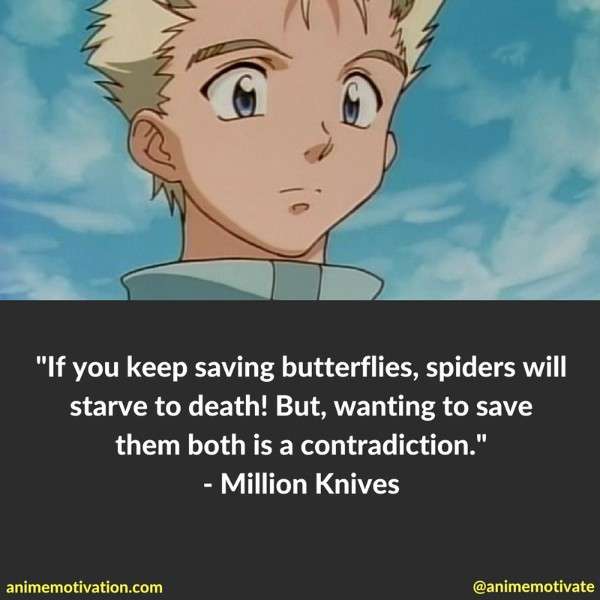 “If you keep saving butterflies, spiders will starve to death! But… wanting to save them both is a contradiction.” – Million Knives

A quote that makes you think. 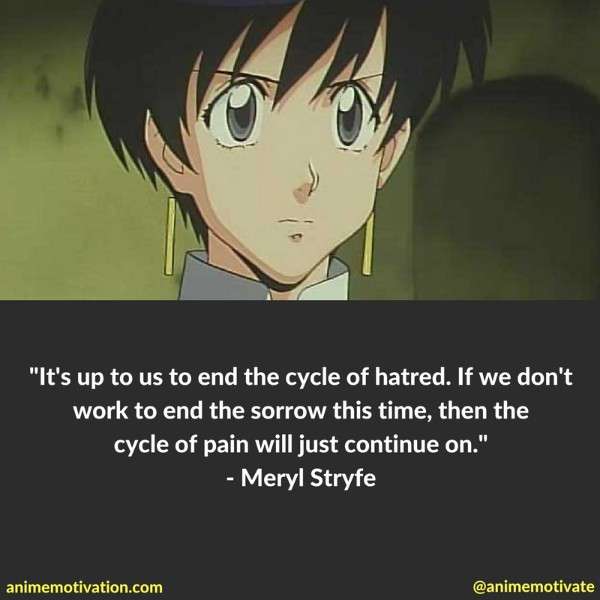 A quote by Meryl Stryfe about responsibility. 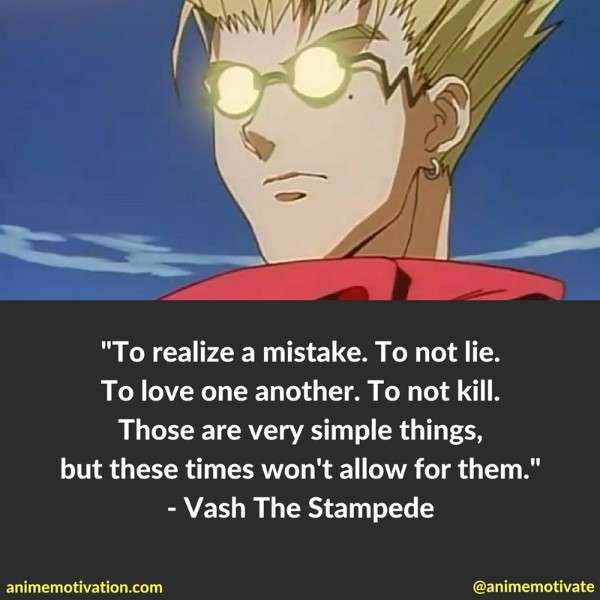 “To realize a mistake. To not lie. To love one another. To not kill. Those are very simple things, but these times won’t allow for them.” – Vash The Stampede 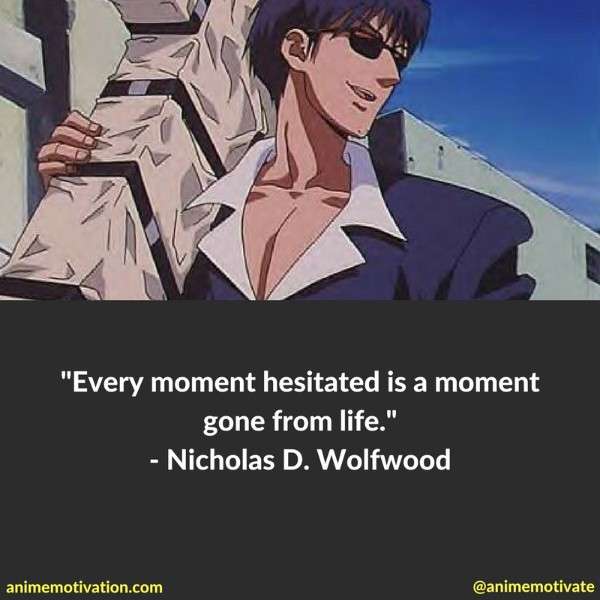 “Every moment hesitated is a moment gone from life.” – Nicholas D. Wolfwood 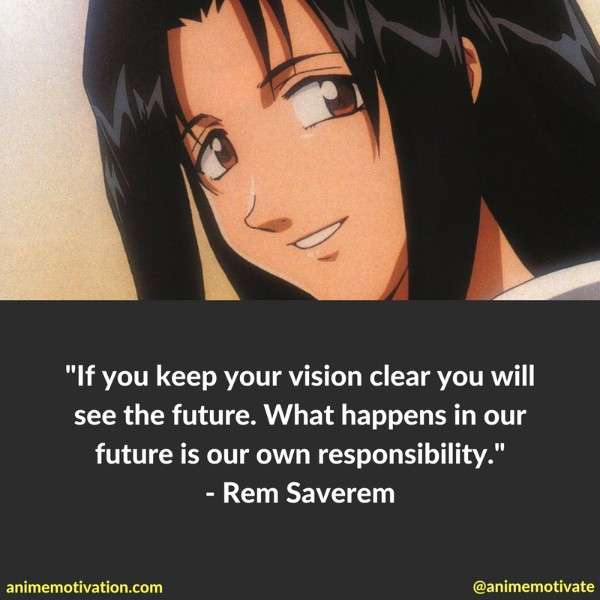 “If you keep your vision clear you will see the future. What happens in our future is our own responsibility.” – Rem Saverem 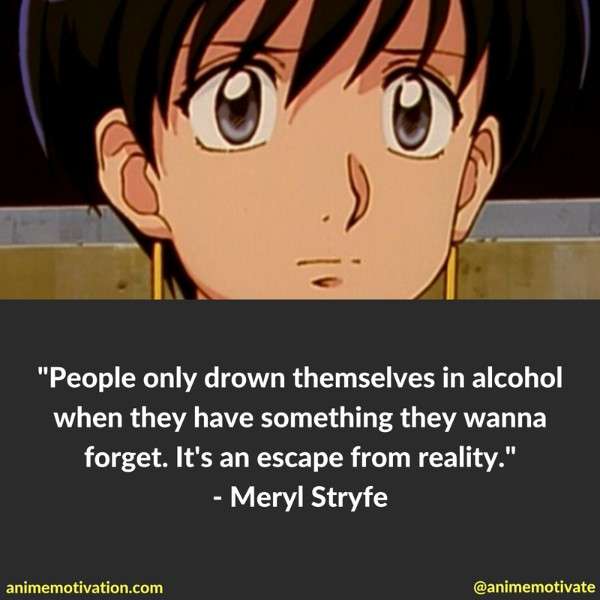 “People only drown themselves in alcohol when they have something they wanna forget. It’s an escape from reality.” – Meryl Stryfe

Meryl mentions this quote to Milly Thompson early on in Trigun. 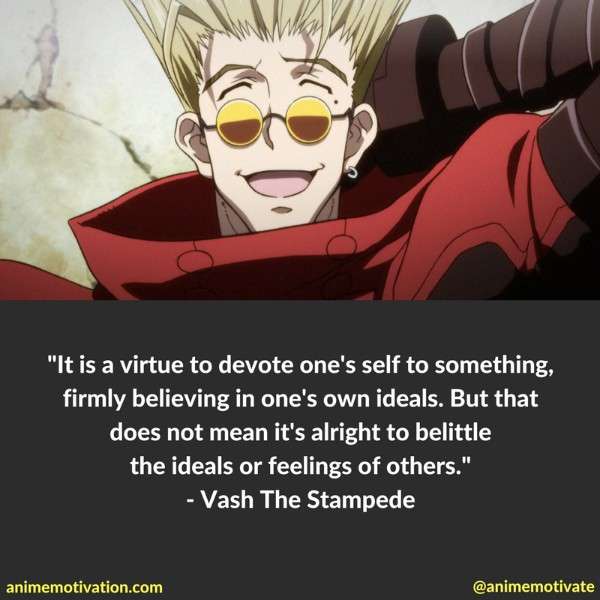 “It is a virtue to devote one’s self to something, firmly believing in one’s own ideals. But that does not mean it’s alright to belittle the ideals or feelings of others.” – Vash The Stampede 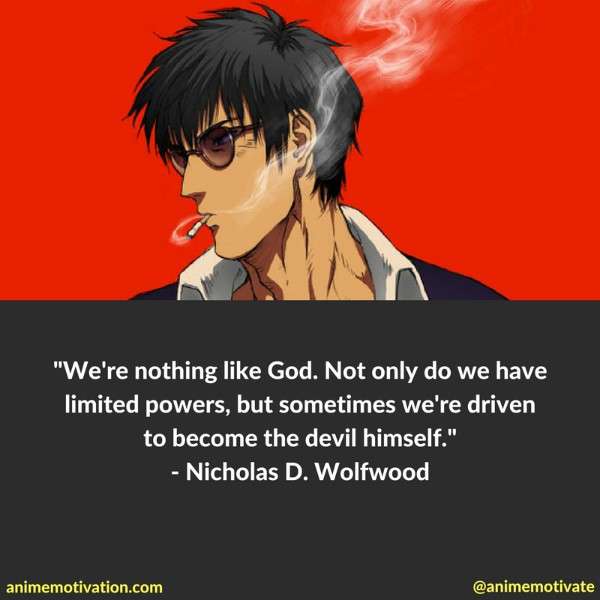 “We’re nothing like God. Not only do we have limited powers, but sometimes we’re driven to become the devil himself.” – Nicholas D. Wolfwood

The truth sure is cruel sometimes. 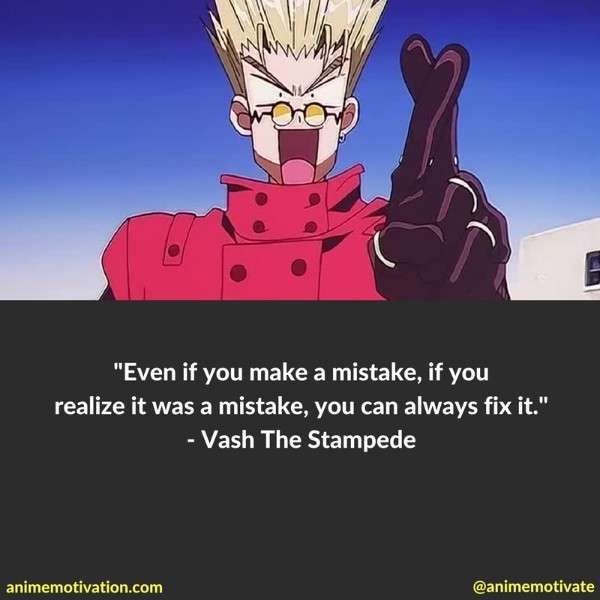 “Even if you make a mistake, if you realize it was a mistake, you can always fix it.” – Vash The Stampede

And finally – a quote from Vash The Stampede to finish off this post.

Share your favorite Trigun quotes on your social networks!