It was only a few months ago when publishers sued Cloudflare for allowing pirates to thrive on their platform, and give them the ability to profit off copyrighted content.

4 Japanese Publishers Prepare To Sue Cloudflare Over $3.5 Million, PLUS More

Now it’s a new story that’s evolved from the last one, even if the usual. 7 YouTubers were targeted by Kadokawa after a letter was sent to YouTube, which YouTube then deleted the infringing material.

Kadokawa isn’t the laid back type. They’re taking this even further and have no interest in letting the pirates go unnoticed. 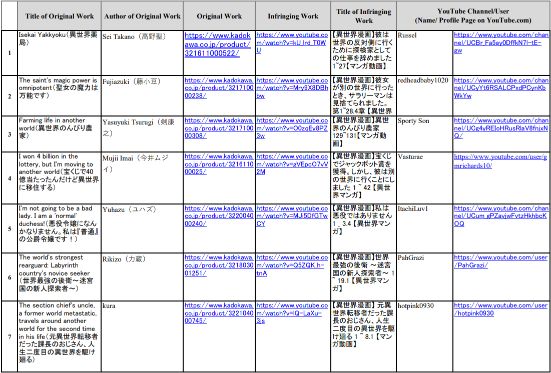 “We demand that you immediately disable access to the Infringing Work and cease any use, reproduction, and distribution of the Original Work. Specifically, we request that you remove or disable the Infringing Work from www.youtube.com and/or any of your system or services.” – Kadokawa

In a visual shared by TORRENT FREAK via Kadokawa, it shows a list of videos on YouTube which were targeted specifically.

Many of the videos seem to be shows and things of that nature. With URLS for each video.

As of now, those videos have been deleted and removed right after Kadokawa’s letter to YouTube.

As you can see, it even says “due to a copyright claim by Kadokawa” and the video no longer exists.

Kadokawa intends to hold all 7 YouTubers accountable by taking it to the extreme.

Kadokawa demands the identities of each YouTuber

Kadokawa intends to take this to the courts and expose the users (or abusers) of copyright who’s videos they shutdown via YouTube.

As pointed out in their own words:

““Kadokawa Corporation is seeking a subpoena pursuant to 17 U.S.C. § 512(h) to obtain information sufficient to identify the persons infringing its copyrighted works. The purpose for which this subpoena is sought is to obtain the identity of the alleged infringers. Such information will only be used for the purpose of protecting rights under the Copyright Act.”

With the way things are looking, and the ways things have been looking since Japan’s new copyright law In January 2021, there’s a good chance they might get what they want.

Or in other words: there’s a good chance that all 7 YouTubers will face some sort of fines or worse for violating anime copyright.

What happens from here is anyone’s guess. But this story is likely to evolve again in the next few weeks, with who knows what else in the and piracy space.

Japan’s NEW Manga Copyright Law Is In Effect Today, But What About Anime?