Classroom Of The Elite quotes worth sharing, by:

Classroom Of The Elite takes a school/slice of life series, and turns it into psychological warfare. With dozens of teenagers competing for the top spot, with ruthless rules to follow in order to win.

These themes and the mix of personalities is what distinguishes the quotes from of its kind.

Let’s share the best quotes the has to offer.

All The BEST Classroom Of The Elite Quotes: 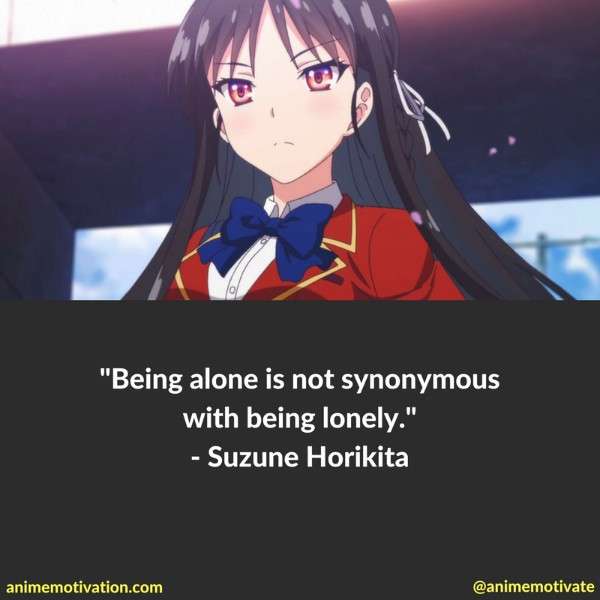 “Being alone is not synonymous with being lonely.” – Suzune Horikita 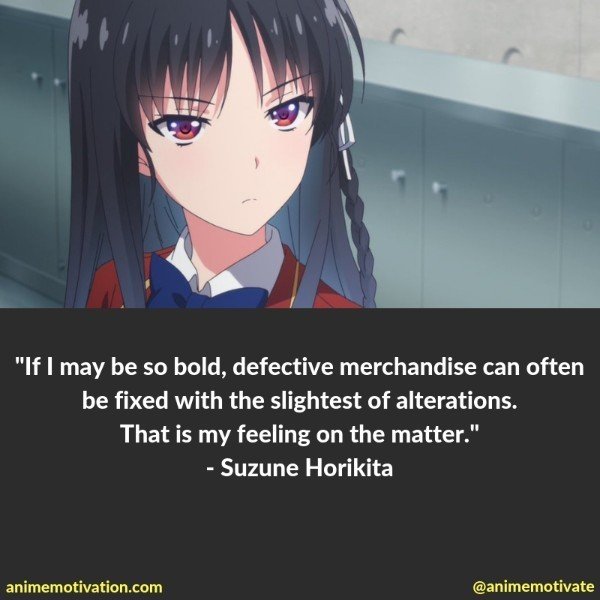 “If I may be so bold, defective can often be fixed with the slightest of alterations. That is my feeling on the matter.” – Suzune Horikita 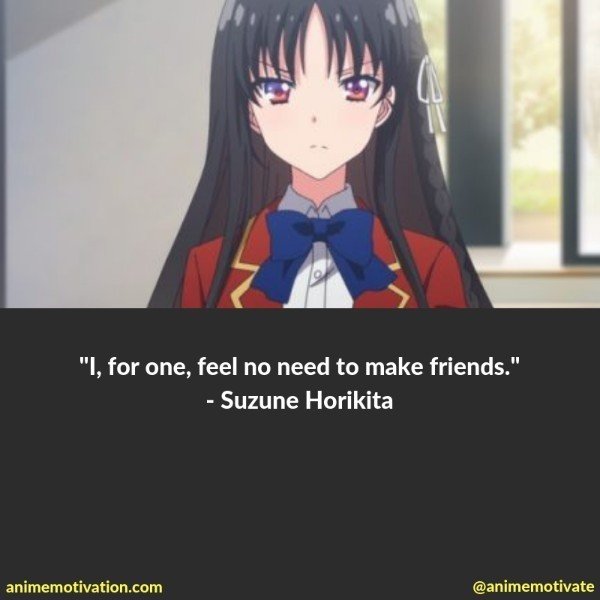 “I, for one, feel no need to make friends.” – Suzune Horikita 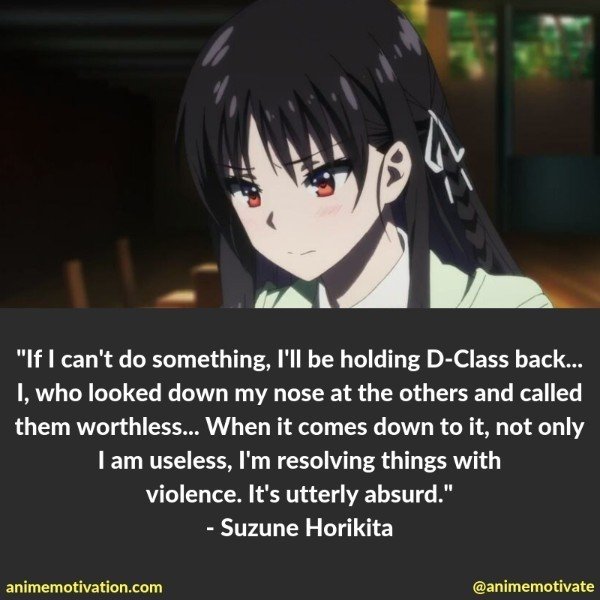 “If I can’t do something, I’ll be holding D-Class back… I, who looked down my nose at the others and called them worthless… When it comes down to it, not only I am useless, I’m resolving things with violence. It’s utterly absurd.” – Suzune Horikita 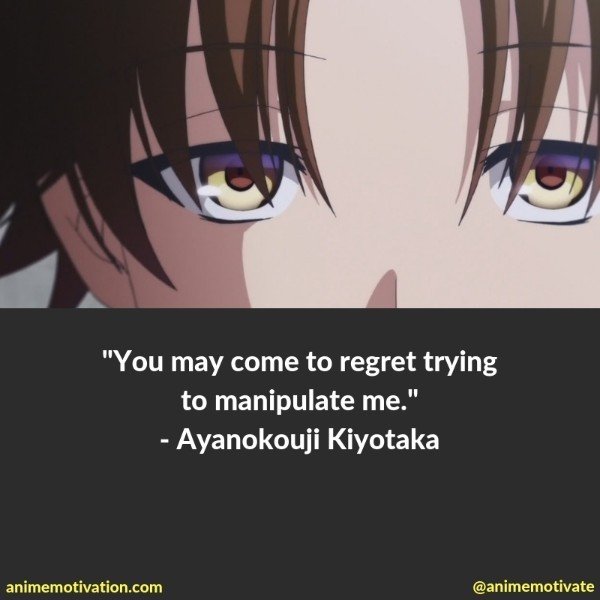 “You may come to regret trying to manipulate me.” – Ayanokouji Kiyotaka 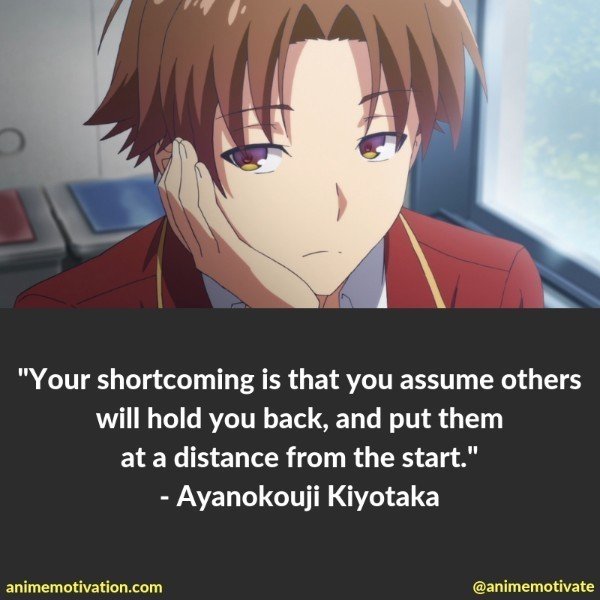 “Your shortcoming is that you assume others will hold you back, and put them at a distance from the start.” – Ayanokouji Kiyotaka 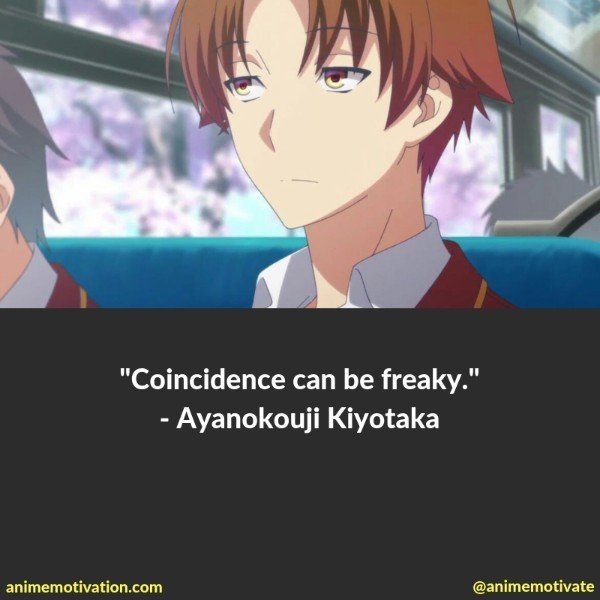 “Coincidence can be freaky.” – Ayanokouji Kiyotaka 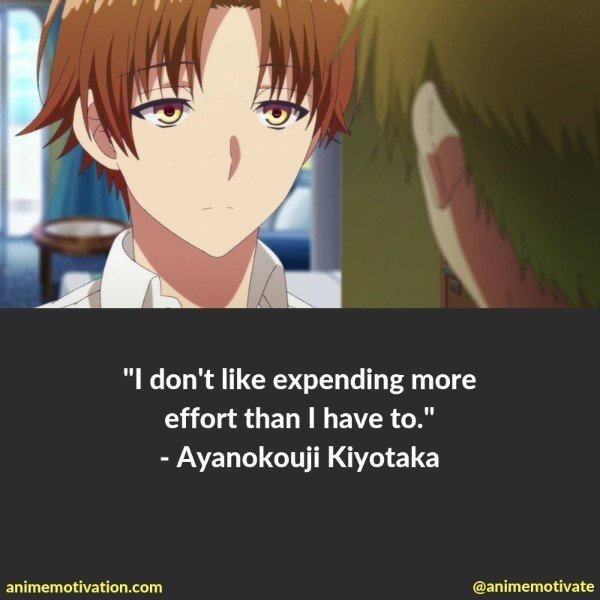 “I don’t like expending more effort than I have to.” – Ayanokouji Kiyotaka 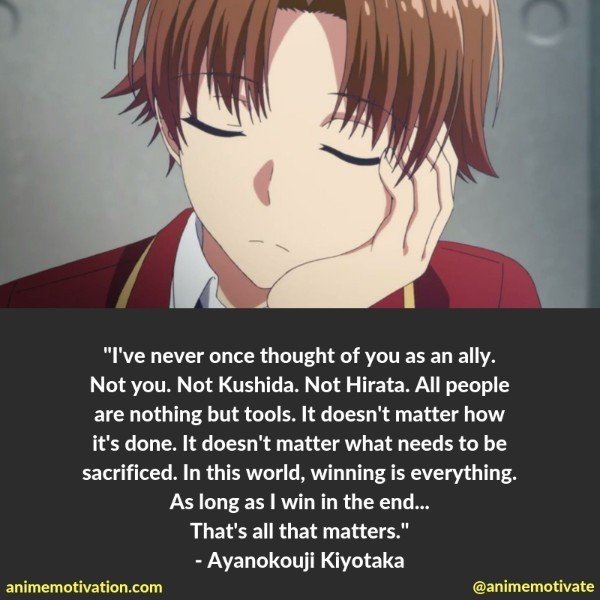 “I’ve never once thought of you as an ally. Not you. Not Kushida. Not Hirata. All people are nothing but tools. It doesn’t matter how its done. It doesn’t matter what needs to be sacrificed. In this world, winning is everything. As long as I win in the end…That’s all that matters.” – Ayanokouji Kiyotaka 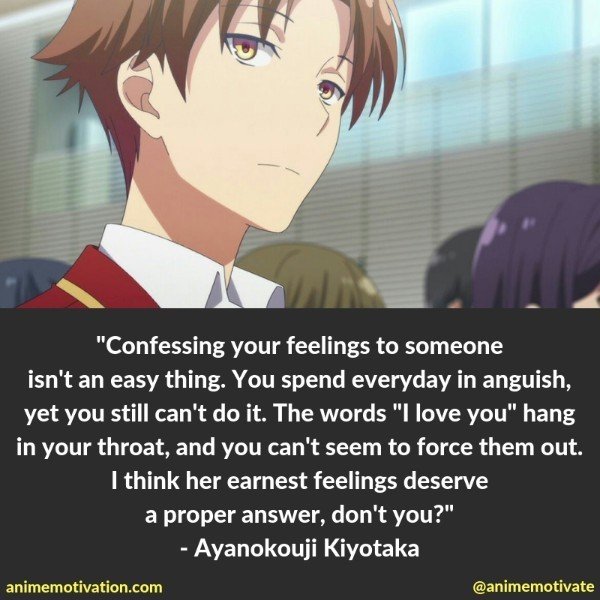 “Confessing your feelings to someone isn’t an easy thing. You spend everyday in anguish, yet you still can’t do it. The words “I love you” hang in your throat, and you can’t seem to force them out. I think her earnest feelings deserve a proper answer, don’t you?” – Ayanokouji Kiyotaka 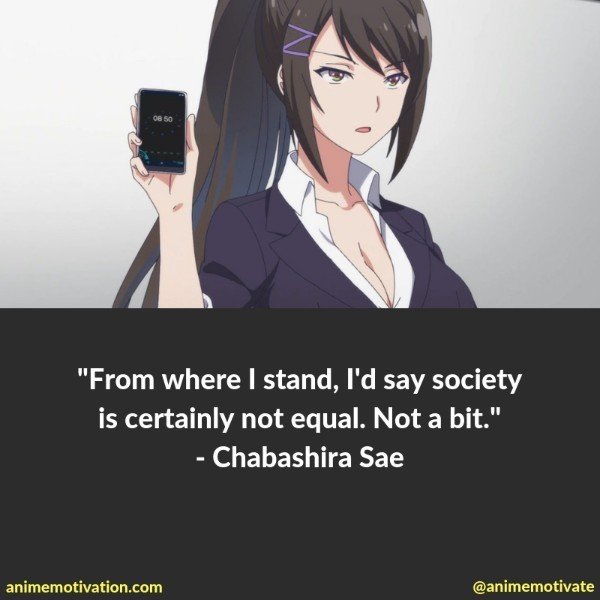 “From where I stand, I’d say society is certainly not equal. Not a bit.” – Chabashira Sae 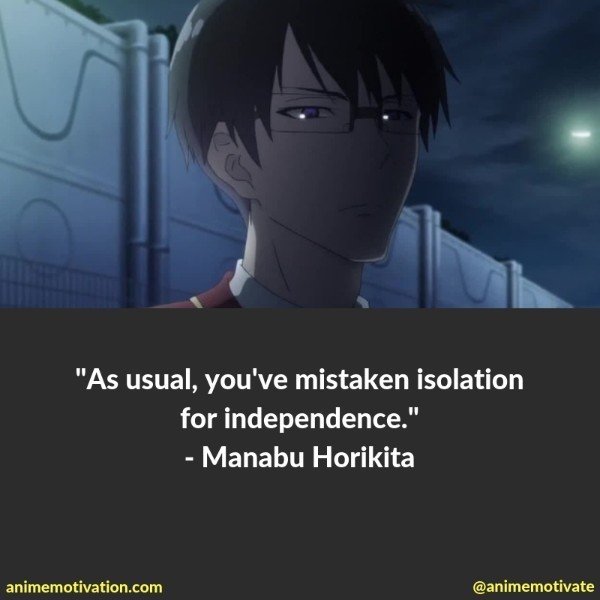 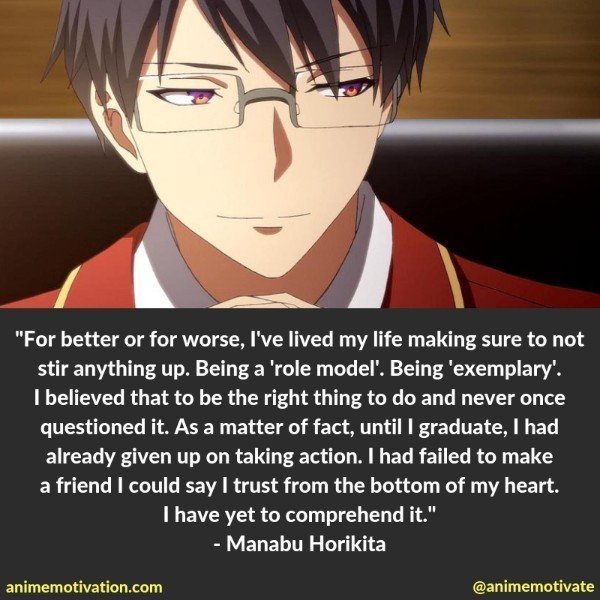 “For better or for worse, I’ve lived my life making sure to not stir anything up. Being a ‘role model’. Being ‘exemplary’. I believed that to be the right thing to do and never once questioned it. As a matter of fact, until I graduate, I had already given up on taking action. I had failed to make a friend I could say I trust from the bottom of my heart. I have yet to comprehend it.” – Manabu Horikita 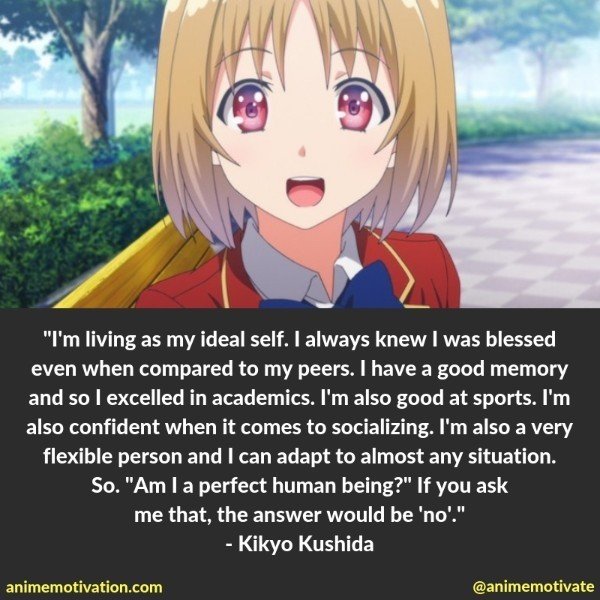 “I’m living as my ideal self. I always knew I was blessed even when compared to my peers. I have a good memory and so I excelled in academics. I’m also good at sports. I’m also confident when it comes to socializing. I’m also a very flexible person and I can adapt to almost any situation. So. “Am I a perfect human being?” If you ask me that, the answer would be ‘no’.” – Kikyo Kushida 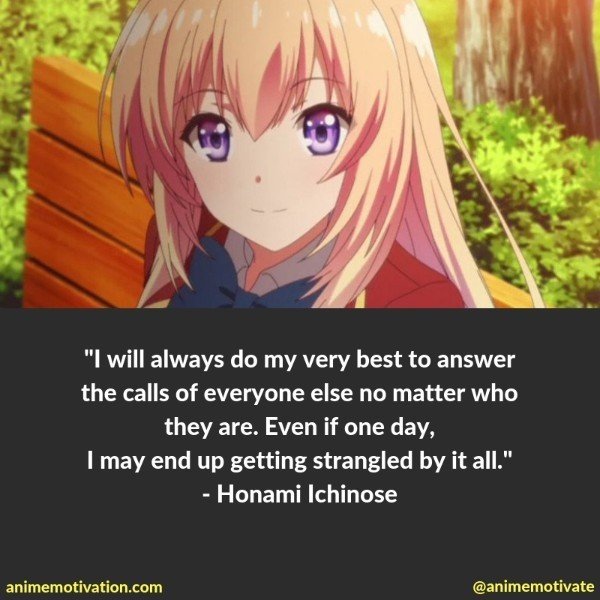 “I will always do my very best to answer the calls of everyone else no matter who they are. Even if one day, I may end up getting strangled by it all.” – Honami Ichinose 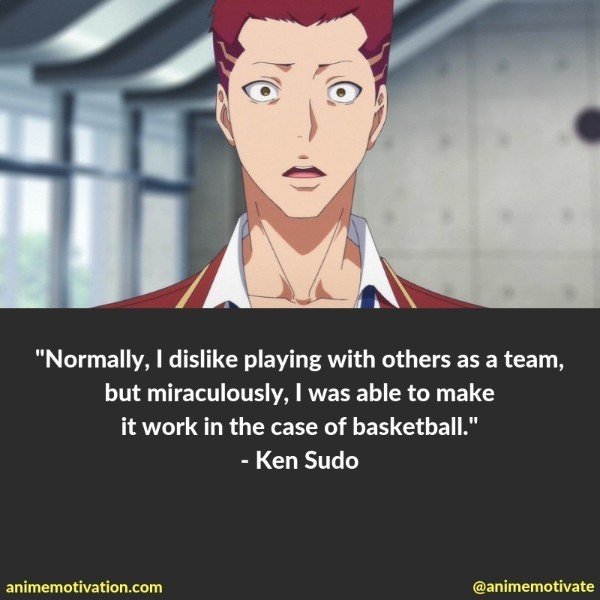 “Normally, I dislike playing with others as a team, but miraculously, I was able to make it work in the case of basketball.” – Ken Sudo

31 Of The Most Meaningful Psycho Pass Quotes