Summertime Rendering is a horror anime that was picked up by Disney+ and is now locked away until it finishes airing. Meaning only Disney+ and pirate sites can be used to watch it.

A woman in China who’s known for cosplaying various characters and enjoying her hobby is the victim. This time around she was cosplaying as Ushio Kofune, the blonde girl from Summertime Rendering.

She cosplayed in the same Yukata she wears in the anime when with Shinpei, the main male character.

Chinese authorities took issue with it.

In the video where the Chinese police officer is seen complaining and shouting at the Chinese cosplayer, one of his main complaints was about the woman “as a Chinese” wearing a Japanese kimono, despite the fact it’s an innocent cosplay of Ushio.

As QUOTED by whatsonweibo:

“If you would be wearing Hanfu [Chinese traditional clothing], I would never have said this,” the policeman can be heard saying: “But you are wearing a kimono, as a Chinese. You are Chinese!”

“The girl, who was previously active on Weibo under the nickname ‘Shadow not Self’ (是影子不是本人) is known to be a cosplayer, someone who likes to dress up a as a character from anime, TV show, or other works of fiction.

On the evening of August 10, she dressed up as the character Ushio Kofune from the Japanese series Summer Time Rendering, wearing a cotton summer kimono, better known as yukata. After she took some pictures to reenact a scene from the fictional work, she waited for her order at a local takoyaki place when the local officers approached her and eventually took her away.” 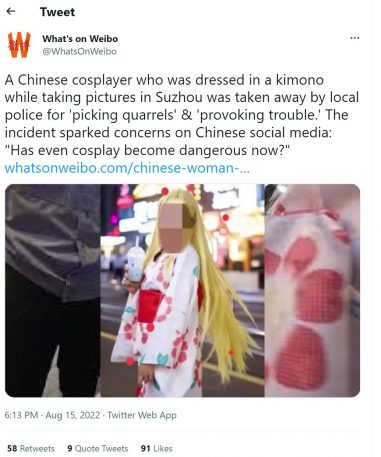 The cosplayer was claimed to be “provoking trouble” even though no one took issue with it except the police officer who found it offensive as a Chinese person.

The girl in question was then taken away and it stirred a conversation across , unsurprisingly since it’s a story that got noticed.

One thing about POLICE is no matter where you are in the world, there’s always gonna be that ONE who will cause drama when there was no drama in the first place.