Comic Girls is an anime series where do things. A common trope in the anime industry.

In this case though, the main characters are artists and writers. Each of them even has their own editors.

It’s all portrayed in a style with art, bright colors, and mostly in a relaxed, comical setting. With the occasional hints about and what goes into making one as a professional.

If you want anime with:

And anything along those lines, here’s some anime like Comic that fit the bill. 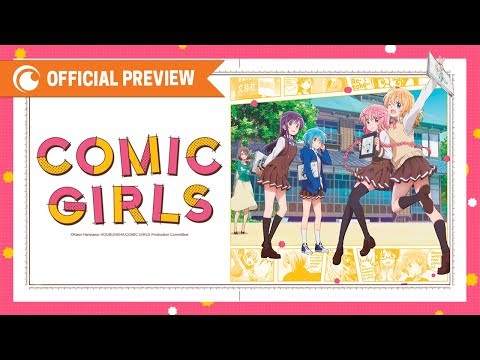 K-On is a series from the 2000’s. And it’s made by the master of the genre: Kyoto Animation.

Yui Hirasawa is the main star, and is the most clumsy, airheaded, daft, and rebellious of the group. She moves to her own rhythm and doesn’t follow the crowd.

Yui and 3 other main characters create their own “light club” while in college. And name their band after school tea time.

Most of the time it’s just doing things, eating cakes, ice cream, drinking tea, and relaxing. And with the lack of a real plot, it makes the anime free flowing and less restricted.

A personal favorite I hardly ever talk about.

New Game is another personal favorite I don’t mention too much. It’s about a college graduate with dreams of working for a gaming company.

Aoba Suzukaze lands a new job doing just that, and with her foot in the door, her passion is what drives her through the struggles and headaches of making from scratch. And helping to publish them.

While in the real world gaming companies aren’t strictly all women, New Game portrays the lifestyle and the struggles with mainly female characters.

Sleeping overnight to get work done and Japan’s work culture is expressed well, but with art, characters, and comedy layered over it.

There’s 2 seasons and there’s a favorite character for everyone, regardless of your personality and what your tastes are.

Related: 12 Of The CUTEST Anime Shows To Warm Your Heart

Denki Gai is about a guy (Umio) who works part time at a store in Japan. Some of the other employees are obsessed with .

Stocking , selling it, serving Otaku’s who come into the store, you get to see this is in a format.

This anime is admittedly weirder with its comedy at times compared to Comic , but it is layered with the “cute” elements all the same.

Your enjoyment will come down to your tastes when it comes to these types of anime. Denkai Gai is a little different.

Yuru Camp is all in the name. anime going camping, living the camping life, with all if it done in a setting.

You even get hints and explanations of tools being used, why it’s used, and what it’s relation is to camping.

If you never thought watching a series about “camping” would be worthwhile, Yuru Camp will change your mind on that.

It’s chilled, relaxed, and easy for anyone to get into. Typical of the slice of life genre in general.

Hitoribocchi is about Hitori, an introverted girl with a heavy amount of social anxiety. She’s just starting middle school as the anime kicks off.

Being alone in a new school is challenging, but she has a promise to keep to one of her supposed best friends. That promise is to make new friends by herself.

The anime is basically from the perspective of Hitori as she awkwardly makes friends, develops her confidence somewhat, and tries her best.

The style of comedy and “cuteness” is similar to Comic , just with a different theme all together.

Main characters are similar as well.

Hanayamata is an anime by Madhouse studios, believe it or not. It’s not their usual style but they’re on point with this one.

It’s an anime about a freestyle dance in Japan called Yosakoi. Hana Fountainstand, one of the MC’S is obsessed with it.

She wants to get others involved so they can all do it together as a group. Hana’s energetic, enthusiastic, optimistic and pushy like your typical “dere dere” character.

While this anime is more like Comic , it’s also a lot like Love Live School Idol Project as well.

It strikes a good balance of comedy, chilled episodes, bringing something new to the table, and not being overly cliche or dramatic.

No fan service either.

7. Is The Order A Rabbit 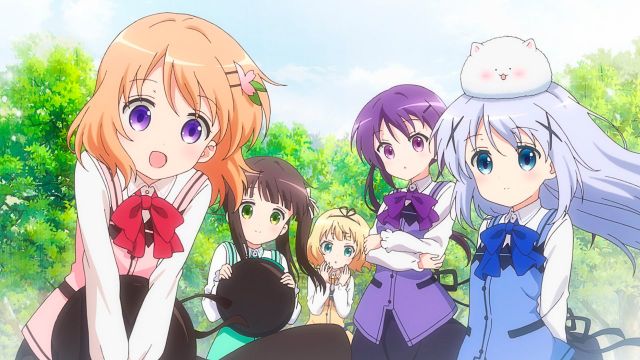 Is The Order A Rabbit is a series with the typical “anime.

It’s about Chio, a girl who’s the granddaughter of The Rabbit House Cafe, where she works.

As a shy and introverted character, she’s not fond of people who are pushy and invade her space unnecessarily, and is good at reading people.

Even though this anime isn’t the most business orientated, it does have business elements since cafe shops are a big part of the story.