This has LESS to do with what people think, and more about awkwardness.

Most people (parents especially) wouldn’t know what to do with themselves… if they caught you watching High School DxD.

And trying to explain yourself out of that won’t end well, anyway.

And then there are anime that for some reason or another, are more enjoyable when watched by yourself. Instead of with a crowd of people or friends.

Let’s talk about both scenarios, and the types of anime that describe them best!

The Best Anime To Watch Alone: 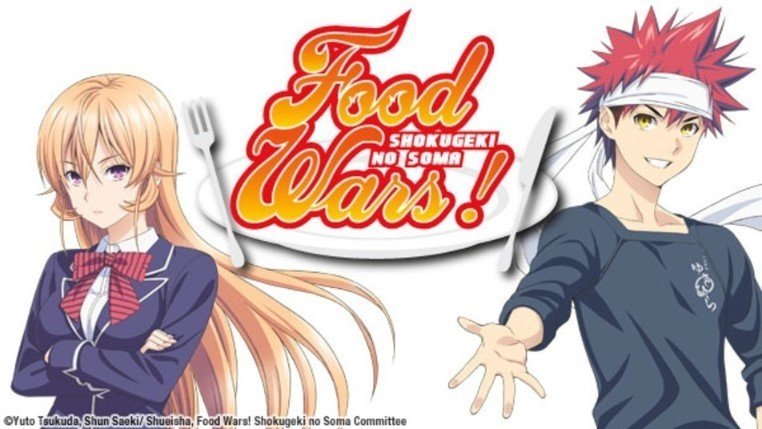 I remember watching Food Wars for the first time like it was yesterday.

When I seen the cover I thought: “wow, food wars? an anime about food I guess, seems reasonable”.

And it’s not like the description for the anime helped, either:

“The Moon Festival is Tootsuki Academy’s annual gourmet gala, where students compete against each other to earn the most profit through selling their cuisine of choice. But for Souma Yukihira, it is also his first opportunity to challenge the Elite Ten, the supreme council that rules over the academy.”

“An anime about food competitions?” was probably my next thought. 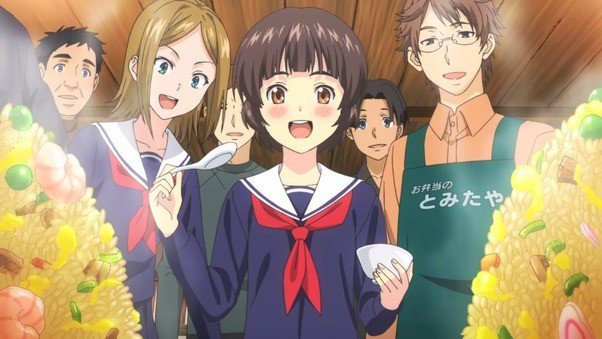 The main character (and his father) cook up a good meal in their mini-restaurant.

The girl in the middle is a childhood friend, with everybody else being popular locals who LOVE the Yukihira style of cooking.

“The food looks delicious, the animation is good too” – a reasonable thought at this point.

But then out of nowhere… you start hearing a girl “moaning” as if you’re watching something X rated.

The food is SO good she can’t help herself.

And then the tentacles come out to play… 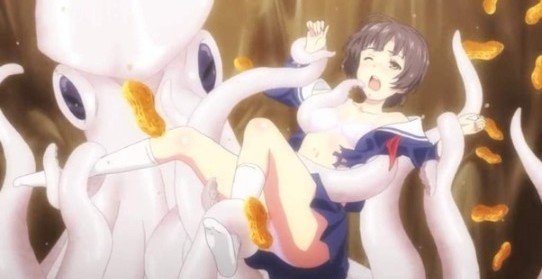 And later into the 1st episode…. 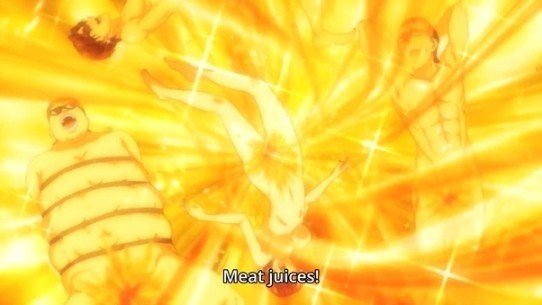 Imagine watching that with other people in the room who don’t know what anime is. And things will get pretty awkward, fast. 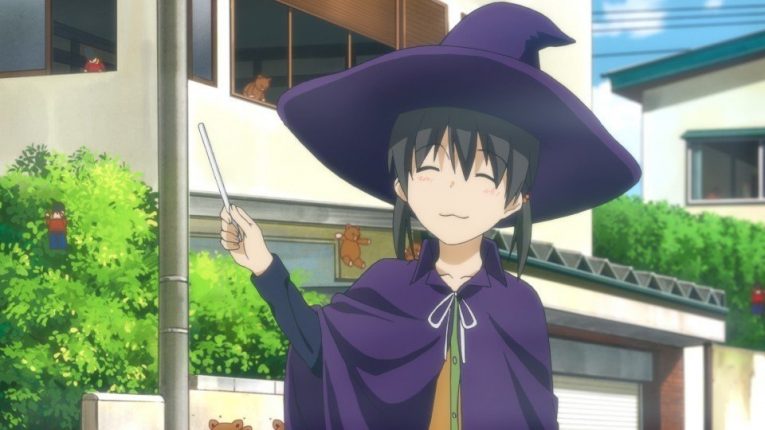 While Food Wars is an series with a lot of “naked” moments, Flying Witch is about as “clean” as it gets.

It’s one of those anime you can watch after a hard days work, when you’re tired, or you wanna spend time with yourself.

It’s no exaggeration to say it’s the most relaxing series I’ve ever dived into, heads first! 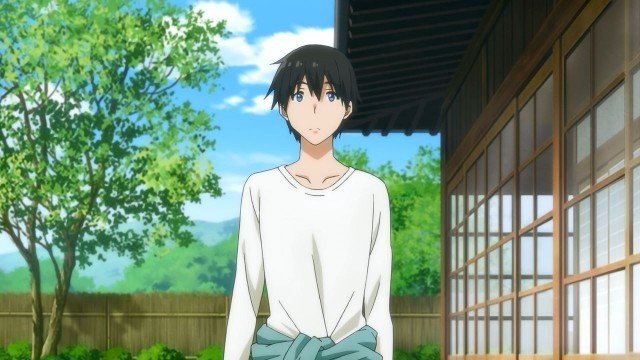 The story is simple. Makoto Kowata is a “witch in-training” who’s sent off to live with family in the countryside.

While picking up basic skills like working in the fields, growing vegetables and what not, you get a little comedy, slice of life, and tender moments that makes you wanna kick back and relax all your troubles away. 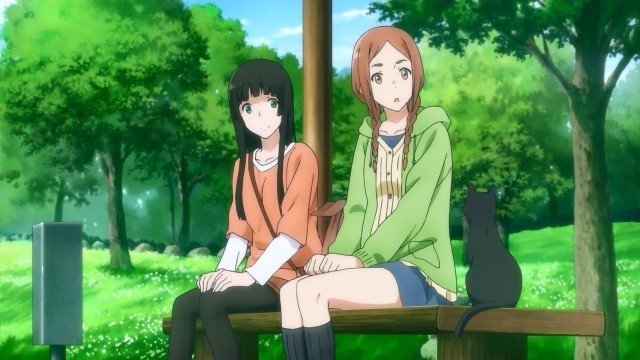 It’s the equivalent of getting a massage. And like any massage, it’s best enjoyed alone.

Otherwise you don’t get to enjoy the moment to the fullest, WITHOUT being distracted by others in the process. 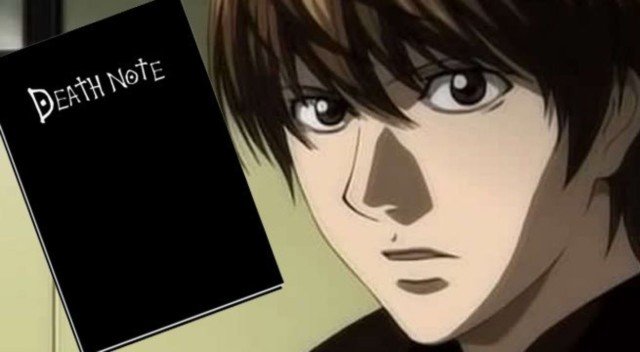 to me is a masterpiece. And before watching it – I never thought I’d hear myself saying that.

The investigative nature of , the deceit, the lies, and the strategic thinking of the main characters…. I don’t think you can experience this to the fullest without watching it alone.

Not to mention the “chilling” episodes that feel so much better when watched by yourself. 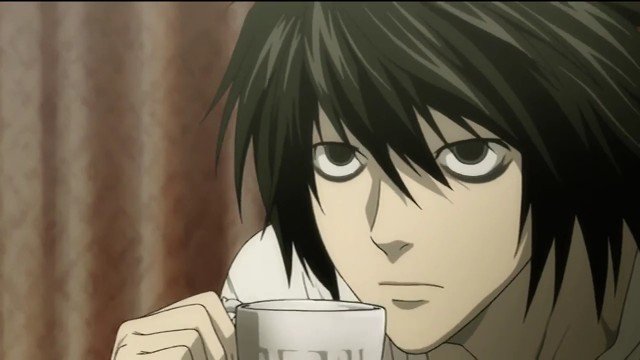 And then there’s the intellectual side of . Figuring out what’s going to happen before it happens, questioning the madness you witness in all kinds of crazy and unfair situations.

Watching with others might work, but it doesn’t beat the feeling of watching it alone. 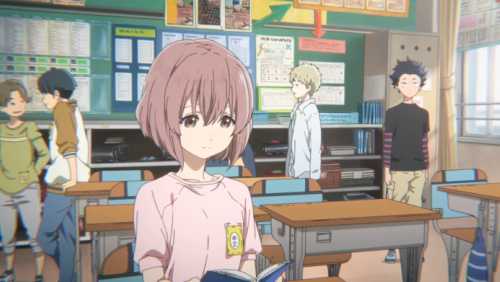 This anime movie is one of, if not the best movie I’ve ever seen. The emotions run deep, and once you’re in, there’s no escaping the emotional pit you end up falling into.

And that’s a GOOD thing. 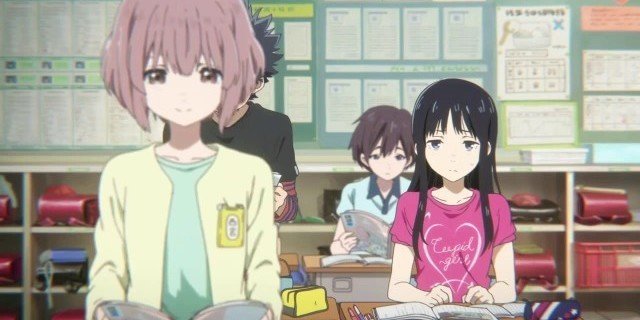 Bullying is a universal theme everyone deals with. Across ALL countries, town, cities and especially schools.

And there’s not much  more despicable and aggravating then seeing people bully those who are disabled for their own sick pleasure. To make themselves feel better about their sh** lives.

That’s what A Silent Voice is all about. And you get to experience it first hand. 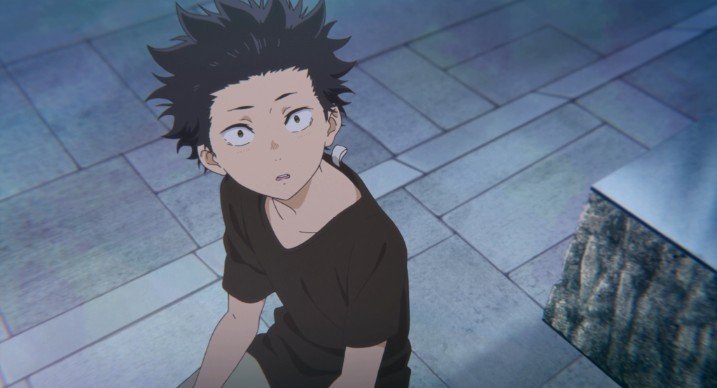 Watching this kind of anime movie with others would breed too much conversation, or even differing opinions that distracts from the purpose.

While that’s not a bad thing, you can only fully take in the emotions of this kind of anime… by watching it alone.

Then by time you’re finished you’ll have a “unique” understanding of what just happened. The kind that wouldn’t happen if other people are around to watch it with you.

Why? I’ll let the images do the talking… 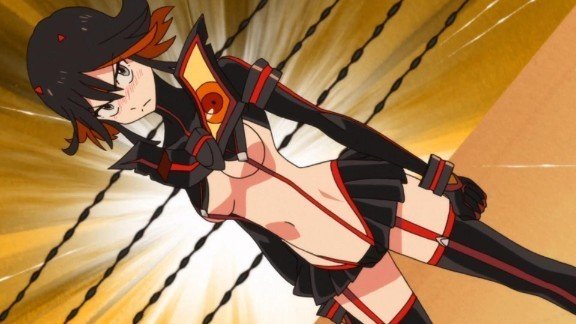 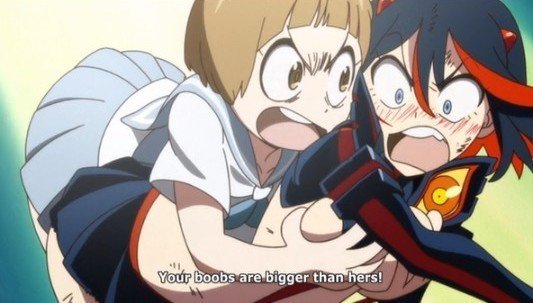 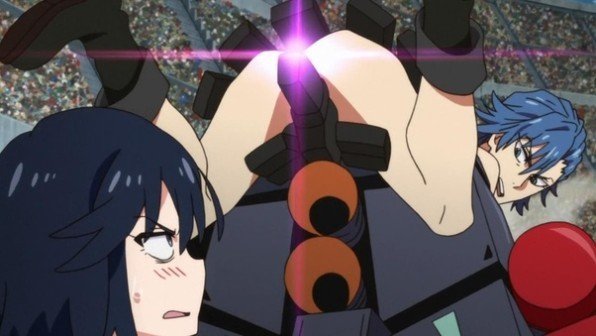 I think you get the picture by now.

anime you wanna compare it to.

The story is solid, and the characters are written well. But whats’s really surprising about is despite the fan-service, it doesn’t make the overall quality any worse.

In fact – it makes it better once you understand the context of the series and what’s actually happening.

Just make sure you AVOID watching it with anyone other than yourself.

Or else you’ll regret it.

Unless of course everyone around you is a fan of anime, in which case I should give you a high five! 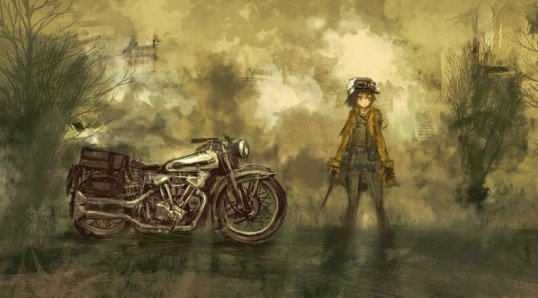 Kino’s Travels: The Beautiful World is one of my top anime series of all time. But that’s not why I’m recommending it.

The reason I recommend Kino’s Travels to watch alone is because it’s an anime about traveling.

Kino travels the world on her motorbike, staying in any town or city for at least 3 days. This is enough time to learn about the culture, people, customs, societies and more importantly: stories. 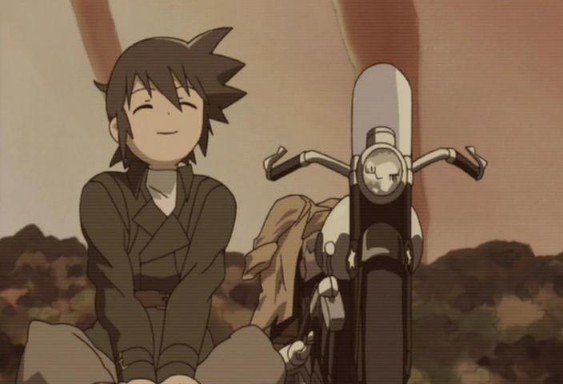 Unlike a comedy series, Kino’s Travels is a slice of life/mystery with psychological elements. And LOTS of philosophy.

So it doesn’t lend itself well to watching in big groups (it might bore some people as the pacing is relaxed).

But watching this alone will give you a similar feeling to Flying Witch.

The storytelling aspect of Kino’s Travels is the anime’s biggest highlight. And there’s no better way to enjoy it by watching it alone.

7. How Not To Summon A Demon Lord 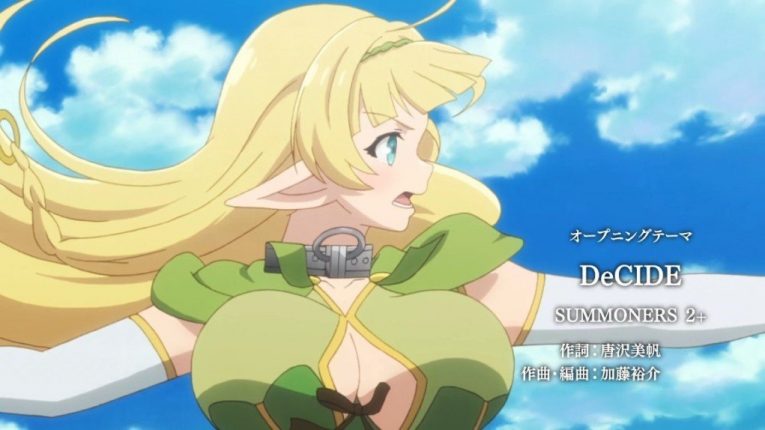 I mean – is pretty in itself. But How Not To Summon A Demon Lord? That takes Ecchi to new levels. 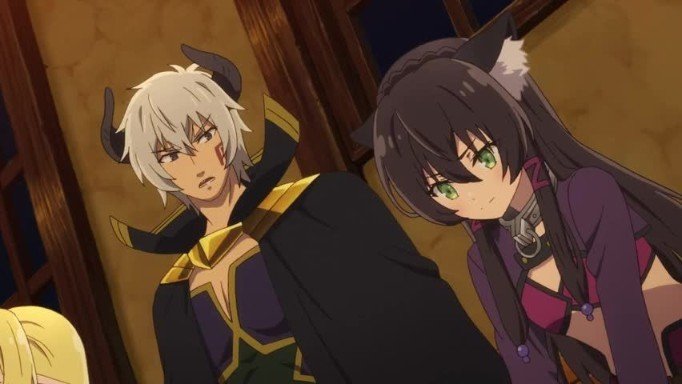 The main character is summoned to another world as his favorite in-game character: Diablo. A Demon lord.

Within tthe first episode he ends up on both sides of 2 girls, on the receiving end of a kiss too “seal the deal”. 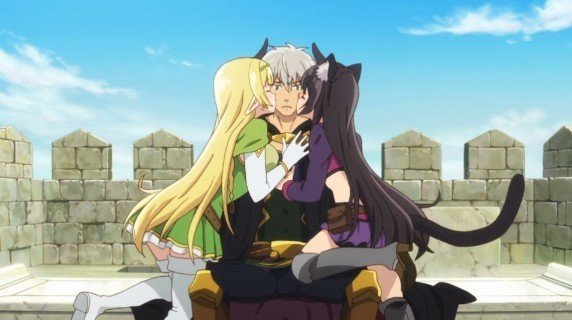 I still wonder to this day what got me into this anime in the first place. I usually avoid shows, but the point is: this anime is TOO extreme to watch in public.

Given the choice I’d recommend  watching in public, and even that’s not a good idea.

How Not To Summon A Demon Lord is even more explicit, and the joy and humor you get from the series is better experienced alone, anyway.

It’s too ridiculous to watch it any other way without losing its charm.

8. The Garden Of Sinners 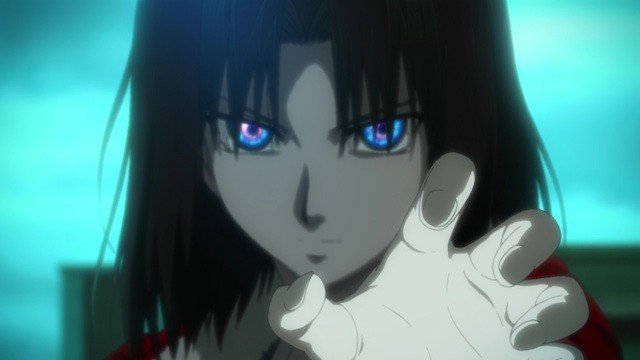 The Garden Of Sinners is in a “parallel universe” to the original Fate series. But unlike Fate, it’s a movie split into 9 LONG episodes.

In a way it’s similar to because you can’t fully appreciate it, unless you watch it alone.

There are so many details, mysteries, puzzles and psychological elements to piece together. It wouldn’t be as interesting if you were to watch it with too many people, because it’ll spoil the fun. 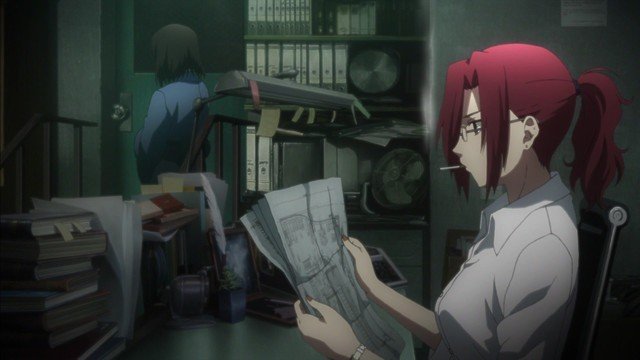 If you’re into supernatural series that “keep you guessing” from start to finish, give this movie a try.

Of all the anime I’ve seen, this is one of the most gorgeous and “well done” in terms of plot and story. And it’s mysterious enough to continuously spark your curiosity.

9. Haganai: I Don’t Have Many Friends 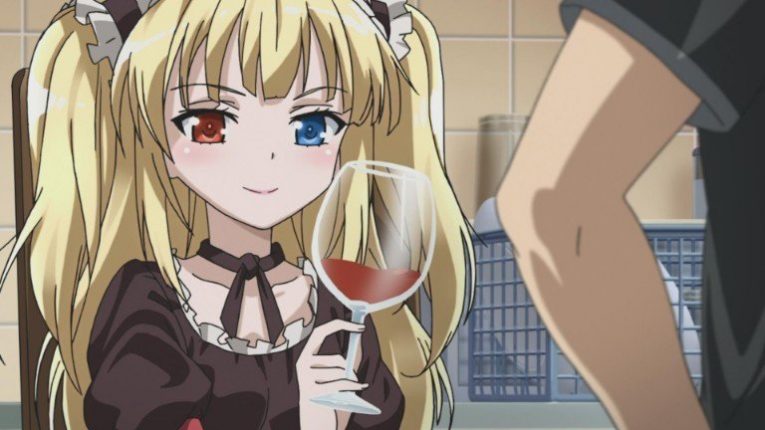 Haganai is a mixture of bullying, , loneliness and explicit things the main characters get up to.

It’s a strange mix unlike anything I’ve come across (it’s a harem and slice of life as well). 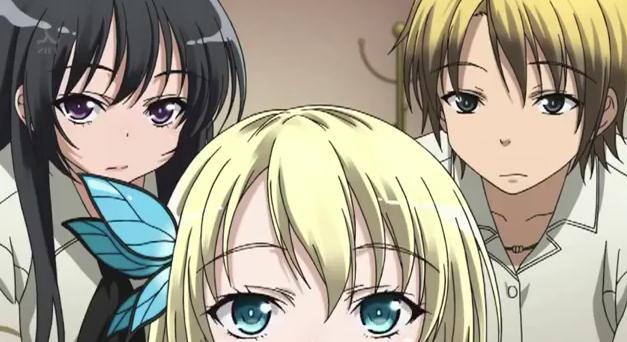 The main characters: Yozora and Kodaka start the neighbors club to help them find and make friends.

But because of the foul language, it’s not the kind of anime I’d recommend watching with others… Unless you don’t have a problem with it.

Watching Haganai alone is fun, and you won’t ever watch an anime with the same style or taste as Haganai when all is said and one.