In Comix Harem, the heroines need sex to restore their superpowers, and that’s where you come into the picture as a player in the game.

The more girls you have sex with, and the more your harem builds, the more restoration takes place! But it goes beyond that.

You also have many opponents to defeat throughout the game on top of everything else and more.

Here’s some of the hottest girls from the Comix Harem game! 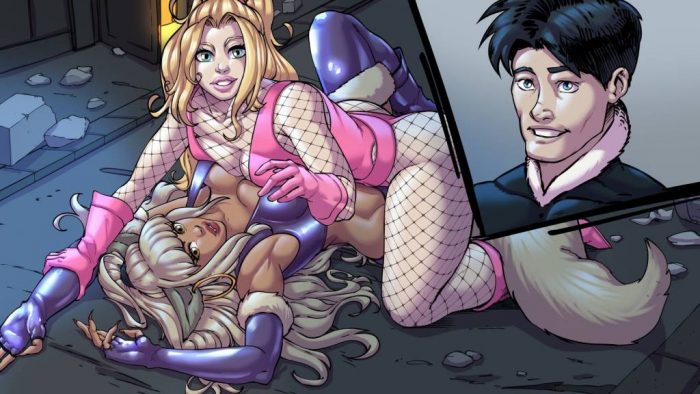 In Comix Harem, you'll enjoy a real RPG with tons of uncensored adult content for free. Explore a mirror universe of video-game and comics-inspired girls, recruit them to your team, grow your harem, and build up your super-powered sex heroines to defeat other players in strategic battles!

Paprica knows what she wants and how to get it!

She lives the life of a vigilante pirate, and even though the S.H.O.C.K.E.R. organization has been desperately trying to recruit her for years, this red hot girl follows nobody’s rules but her own.

Do you think you can handle this spicy chilli pepper?

Trained and brainwashed by an evil organization, The Scarlet Bride was molded into the top spy on the face of the planet.

Her powers grew so strong, she was able to break her conditioning and escape the clutches of her sinister employers.

Now she is one of S.H.O.C.K.E.R.’s best agents, traveling the globe, never failing to complete a mission, while finding a way to let her friskiness run amok.

A sweet little lovemaker, Foxy Lady will do you no harm. You have to be 100% devoted.

Life in the big city is not easy, so her superpower helps her to adapt in tough situations – she likes to use her charm to captivate the bad guys.

Foxy Lady is the girl you want to fuck, but don’t want to mess with! If you need her just say her name out loud (it turns her on), and she will appear.

Power Puss is one naughty kitty. Her incredible Superpowers, which help her control matter and manipulate the physical properties of objects, can only be rivaled by her super-libido.

Very few opponents can outlast this wild cat – on the battlefield and between the sheets, she is one to watch out for.

Now she is armed with the kinky power to make anyone desire her, and she is ready to fuck every sexy Hero and perverted Villain she meets!

Even though she is a naughty girl, her gentle touch and wet pussy have convinced many evildoers to let go of their lives of crime and switch to the good side!

Before she became a SuperHero, Bloodless was a hard-headed, dedicated vigilante civilian.

However, when she got the injection, she never expected that she would be blessed, or cursed, with vampirism. Yet with her strong morals, she has found a way to satiate her thirst with something different than blood.

Now, she has most of the strengths of a vampire and none of the weaknesses… except for the hunger. She still needs body liquids to help her satisfy her appetite.

When Sisi received her SuperPowers she instantly knew that she would use them for good!

For her own good that is! Aided by her superior ice manipulation, she can ice skate her way through every competition! However, she might need a boost this time. Will you help her dazzle the jury?

You know, it’s too bad it’s the middle of summer and the winter races are far away…

When crossing paths with Sextem one has to be extremely confident to be able to withstand her trash talk.

One should also have a pair of brazen balls in order to hold their ground, as her abilities pack quite the force. Literally. She is able to conjure a concoction of explosive energy followed by a devastating shockwave when she wills it.

The only drawback being inconsistency in charging up this power, as it is solely reliant on Monique’s current state of being and levels of excitement.

Famous for her activity during the Golden age of Heroes, The Blonde Menace always knew just what a Super Heroine needs to do to get ahead.

She spent her formative years menacing the Haggies gang and putting mobster Al Cuckone’s tongue up her ass – for a whole week.

During an investigation, she accidentally discovered a glowing sphere that propelled her forward in time. Stuck, but not lost.

Born in the decaying D-town, Rusalka grew up in Midtown, in the only remaining house on her street. Urban blight, houses that got boarded up, their owners never to return again.

The only residents left were the ghosts and those too poor to get out. Her first concerts were pretty raw, in abandoned warehouses and churches. Too elegant to destroy, too expensive to repair.

When she hit eighteen, she took the Serum. She could not only scream high tones, but decimate buildings with her voice and Super Shriek was born.

Once, there were hundreds, thousands of Star Sentinels who protected the innocent and upheld the law throughout the galaxy, sharing the power of a star between them.

However, the once-proud order fell to corruption, and their mission shifted from protecting and serving to controlling and exploiting. Eventually the order was abolished, until a twist of fate granted the order’s full power to Rikki.

As her home was engulfed in darkness, the Warrior of Sky Zahira sought the help of other champions from far-away lands. She even took the Super-Serum to grow her own forces, yet her powers were not enough to protect her home from the many villainous attacks.

This is why she traveled far, to a city filled with heroes, hoping that at the very least, one would prove worthy.

This is when she heard the legend of one man, so masculine and amazing, that all others trembled before him… Wildman.

An intrepid treasure hunter, Wendy Weird was hit by an errant shot of the Lambda Beam, a teleporter from the planet Spredd, allowing for instant transport between two places!

The beam takes so much energy to go from Terra to Spredd and back, it takes three months to charge up, so she spends half her time here, and half there, using her amazing Spreddite technology and human instincts to help people in both worlds!

Dragonheart takes her name from the amulet she became mystically bound to after she took the SuperSerum shot. The name of this amulet is The Dragonheart.

Her connection allows her to fuse with the artifact, the draconic soul within it granting her its strength, scales, claws, and flame – but in taking its power, she must also accept its fury, the burning rage and thirst for destruction the dragon’s soul contains.

It takes a strong will to harness it to do good.

She and her sisters all inherited their mother’s avian powers, though Hawk has distinguished herself by becoming the most famous and well-known heroine of the family.

Candy was born with a silver spoon in her mouth.

Raised in a rich household, this righteous young lady never experienced the real world… until one day, in an act of rebellion, she ran away from home and saw just how bad life on the streets of Great Harbour is.

This made her train hard so that she could become a heroine, even though she never had the SuperPower injection.

Now, armed with her desire to make the world a better place, Switchblade protects her city from crime! However, she is utterly unprepared for some of the kinkier aspects of heroism!

Upon taking the SuperSerum, Carissa saw her body change. A strange and beautiful crystal emerged from her chest, glistening and sparkling.

Now, Astral Amethyst’s powers come from her gem, which allows her to focus on love, in all its forms, and channel it.

Humanity’s champion of love, she proudly serves as a member of the interstellar Amethyst Legion, seeking to spread the joys of love and lust all around the world, and throughout the universe.

Yara’s ability to command animals is controversial, attracting the ire of many organizations.

She agreed to only use one, and from there her superhero identity was born. Inch for inch, she chose well.

Once a famous supermodel, Claudia was convinced her co-workers were messing with her makeup.

She believed that half her face had become discolored and went on a revenge-fueled sex spree, deciding her fucking strategy on the toss of a coin.

Tina was always shy. She delved head first into martial arts, and trained hard to take her mind off things.

Her strong sense of justice pushed her to try out for a SuperHeroine, even though she didn’t really believe she’d be one of the lucky few to get SuperPowers. Damn, she actually believed that if she got any, they’d be something silly, like bending spoons with her mind or talking to horses.

Never did she suspect that she’d become a super fighter, with a force so strong that the S.H.O.C.K.E.R. would instantly recruit her and make her into a Frontliner!