It’s always interesting seeing what people think about , and what they have to say.

When I say “people” I’m talking about:

And people outside the industry who are:

for whatever reason causes people to say irrational things about it. Along with false claims that hold no weight in the real world to push their own agenda.

It’s a strange thing I’ve noticed ever since being in the industry. It’s like people are afraid of becoming more successful.

The pushback is real

They’re cancer. should be banned globally

Here’s what people think of , and what they have to say…

Regardless of how stupid or intelligent it sounds. 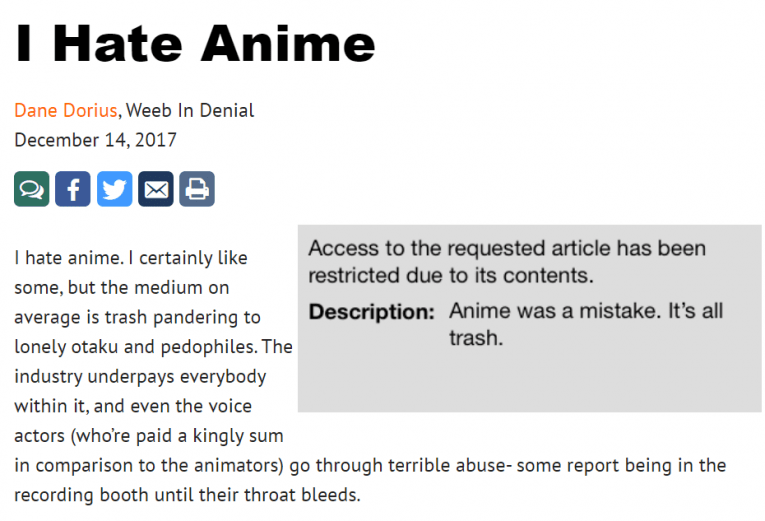 “I hate . I certainly like some, but the medium on average is trash pandering to lonely otaku and pedophiles.

The industry underpays everybody within it, and even the voice actors (who’re paid a kingly sum in comparison to the animators) go through terrible abuse- some report being in the recording booth until their throat bleeds.”

The writer starts out with the typical “ is for lonely Otaku and paedophiles.”

These are the types of false notions I’m talking about that hold no weight in the real world. People pull it out of a hat and decide it to be the truth because they said it is.

I can’t call this person a hater with a passion, but his first point leans on the side of misinformation.

The other stuff about employees being underpaid is true, so I’ll take that.

Also – “shut-in” culture is more of a thing in Japan, regardless of itself.

Related: Differences Between An Anime Enthusiast, Otaku And A Weeb

2. I don’t understand why it’s so popular

“I don’t understand why it is so popular, its just an art style with spiky hair and way too feminine men, i suppose i get why 10 year olds like it because its what pokemon is but there are adults who are fascinated with it! Its become way too big a trend, like crocs or long hair for guys, there is no reason for it!

Ever time i walk into a book store there is a whole freaking section devoted to this stuff and how to draw it! And because of it, half of all RPGs i see are based on , rarely do we see an RPG like Fallout or KOTOR because they are all Final Fantasy style with magic and things.

I’m just wondering if there is something i’m missing? Is there something amazing about it that i simply don’t get?”

This person hates . Their hate doesn’t sound like “pure” hatred to me though.

Regardless their issue seems to be how guys are feminized (true to an extent), and the style overall.

Also how it’s more popular than it should be in his eyes.

Not the best argument, but a valid one from the perspective of someone who “hates” .

“Japanese animation is just… corrupting to your spirit.

They are designed to be offered to people in their adolescence and young age. In Japan, there is serious limitations to opportunities based on age, so this pastime was hence invented to allow the young people in Japan to wait till they advance to higher positions. In other countries, ranking and opportunities are merit-based, meaning you shouldn’t waste your life on things like .

In fact, Japanese government probably wants to end and has found a way to do so. It is planning to engage in military conflicts; once it does, no one will watch all those “” stuff any more. Its export of to regions like other countries in East Asia and North America serves to fool those countries and corrupt the youth there, so that Japan would have a easier time fighting wars.”

Over on Reddit, where a lot of people share their hate for , some of the comments are senseless.

This person says they hate because it’s corrupting your soul. And Japan has an ulterior motive to “corrupt” the youth in other countries like the USA.

Of course – none of this makes any sense when you wake up to reality. And is the equivalent of religious extremists saying “you’ll go to hell” for not conforming to their beliefs.

You have people watching the same thing over and over again for long periods of time, people who are brain-dead that defends the they liked if someone says its sh*t, and most of every convo I come into is about sexual sh*t.

This I cannot handle anymore The type of people its viewers turn into A.K.A Weaboos. You already know who these people are. But i’ll explain anyway.

These people are a disease. They think they live in a fantasy where everything is beautiful than it is, they a sh*t ton of useless crap that makes their delusions worse, and they start to have these imaginary women to comfort em (I don’t wanna mention it. It disgusts me.)

The standards it makes people have. Look at em weaboos for example. Their life aint healthy. They stay inside for idk how long just to finish a season. It changes their standards on what women they like.

It’s like a drug. Once you start, you’ll want more.”

This RANT from a person on Reddit generalizes people who watch , similar to the generalizing of Hip Hop, certain cultures and other “stereotypes”.

There might be a sprinkle of truth in it (toxic fans for example), but it’s more extremism and ranting than anything else.

Relevant: Similarities Between Hip Hop And The Anime Industry

I’ve watched countless ’s, countless, because my friends would force me to watch that sh*t. “Oh try this one it’s good!” “Come with me and see this one! You’ll like it” over and over and over again.

It’s the same characters with the same plot on repeat, over and over again. “You just haven’t found the right there’s good ones!” No there isn’t. It’s the same jokes. The same story with a different hair color.

The style is usually flat with lazy coloring, no interesting lighting and fight scenes that take 12 episodes to finish. The young girls are sexualities to sh*t, are annoying, or useless. Every character has a crying scene. No character has a happy back story.

And the fan service. The. F*cking. Fan. Service. There does not need to be nearly nude scenes of a teenage girl. Ever. It’s creepy. They’re children.

Newsflash: you idiots that think “Otaku” is a term of endearment? I dare you to go around Japan saying that sh*t. It’s not a good statement. You’re not treated well. You’re laughed at in a language you don’t understand.

Japan isn’t a 24/7 convention. And for those of you who “dream” of moving to japan? You wouldn’t last a Day.

They’re literally the most xenophobic people known to man kind. And considering y’all don’t have basic respect for other people’s culture? Y’all wouldn’t be accepted.

Y’all weeabos fetishize Japanese culture to the point where you got idealized pictures in your head. And god forbid anybody tells you the truth. Your p*rno pictures of underage girls isn’t . It isn’t innocent. I don’t care if it’s the “art style”, if you like that sh*t don’t come near me.”

As you can see – this person had a LOT to say about , the community and its fans.

I’ll let you take it in and dissect the message.

In the meantime I’ll share some more “thoughts” on those who hate .

“Because of all the sh*t posting weeaboos do, if you’re going to like it then okay fine, have some good conversations about it.

I can understand the culture of , I can’t f*cking stand the fanbase.”

Again – the main theme here is the extreme side of the fanbase. Or an extreme opinion of as a whole.

It’s fair to say ‘s reputation isn’t the best in some people’s eyes.

“It’s equal parts the squealing waterfall-tears hypersexualized scream-crying tantrum mega-irritant sidekick character in all of the appeal-to-teenagers ones I’ve seen (plus, they seem to just be tropes built on tropes).

Or the infinitely depressing three hour montage of raining streets and mumbled dialogue plus heavily furrowed brows that makes up the ‘‘ ones. Not to say they’re all like this, but I’d go ahead and posit 70% plus, in my experience.

And as for the people that watch them? Well, weeaboos are just a more overt kind of fanboy/girl, and nobody likes those.

Might as well go around telling everybody about Milwaukee’s starting lineup whether they ask or not, as opining on why katanas are the superior sword and ‘you really have to watch this series, the characters are irritating but the story really gets good after about seventy hours for a while.

Then it’s slow for about fifty hours, but the last 3 hours are pretty good except the end’. Yeah no, keep that to yourself.”

Every form of entertainment has its cliches, stereotypes and misunderstandings.  being one of the most misunderstood and over generalized.

This is what it sounds like this critic is getting at.

It’s one of the sanest comments from people who “hate ” on the internet.

“I don’t hate . It’s the fans that make me uncomfortable.”

This is the most common sense answer on any of Reddit’s threads. Or any of the internet’s “hate” forums for in particular.

There are toxic anime fans so it’s understandable, even if “uncomfortable” is a vague way of putting it.

is misunderstood by most people That’s the lesson we can take from this post, and the comments directed at , the industry and its fanbase.

Most people generalize it, rant, and don’t have anything meaningful to say as far as debates or arguments.

Only a few people make any real sense or touch on relevant points without throwing a fit.

Am I the only one who hates ?

People who hate anime, why?

People here who hate anime, why do you hate anime in the first place?

I hate ALL anime

Anime haters of reddit, why do you hate anime?

I hate anime and everything about it

Why do you hate so much?

6 Step Anime Guide To Getting Through Coronavirus Pandemic