In case you don’t know what Buzzsumo is, it’s a platform for discovering content and measuring how many people have shared it on social media.

The data is gathered from:

Because is still so niche, it hasn’t smashed big numbers like Buzzfeed would (which is in the millions of shares). But that’s not the only reason.

I just don’t think 99% of sites and owners are thinking about milestones when it comes to content. In contrast, Buzzfeed is, that’s why it’s so damn popular for its content.

Whether you hate it or not.

Going back to for a second, this kind of data can’t be found on the internet. So I thought I’d create it myself by using Buzzsumo’s platform.

Of all the sites (and websites that also publish content) these sites below have the most shared articles online.

How I gathered the data

I searched keywords on Buzzsumo like “” to see which websites came up, related to the word “”.

But since that’s limited to the word , I then searched by domain. Choosing the most popular sites we all know of (, ANN, etc) to make sure I find the most shared content without missing anything.

After doing that, this is what it lead me to…

Top Articles Online With The MOST Social Shares:

Taken from Boredpanda.com, The gist of this article is as it describes. A talented father turns his sons “ doodles” into real characters. Essentially transforming them from basic drawings to something special.

There are 5 parts to this article all together. And it’s not surprising why it did so well, since it has shock value (and it’s impressive).

Taken from screenrant.com, this article takes advantage of a celebrity actor’s costume seen in Black Panther. Which hints personal interest in . So based on that alone, it’s easy to see why it has so many shares.

It mentions someone famous + combines that with . Add that to their large audience and you have a winning article with a lot of shares.

In 3rd place, Otakukart is surprisingly the 3rd article taken from a dedicated site. #1 and #2 aren’t dedicated to at all.

Again, it’s easy to see why this article has so many shares…

All things considered, this “spoiler” by Otakukart, and the massive social shares that followed shouldn’t be surprising. It makes a lot of sense.

4. Japanese Woman Recreates Food From Miyazaki Films And Other (118,600 shares) 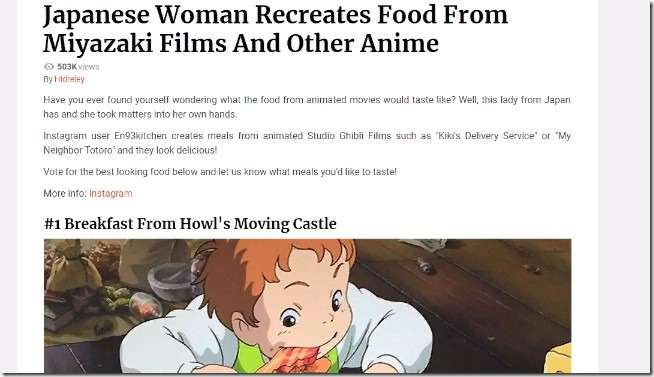 4th we have the website: boredpanda.com (again) with a twist. A Japanese woman takes anime food seen in Miyazaki films, and recreates them. Down to the last detail.

So it’s no wonder it looks so good (part of the reason it has so many shares). And besides, who doesn’t love food?

5. Blade Runner Is Getting A Short From Cowboy Bebop’s Director (112,800 shares)

Cowboy Bebop is a famous series, considered legendary by a lot of fans. So when you combine that with the director of Cowboy Bebop making an of an old school film… This is bound to be the result.

Otaku Kart shows up again, this time in 6th place.

Like their other popular articles, they focus on a niche of shows (, , ).

And when they reveal a massive spoiler or something shocking about these shows, fans eat it up like they’re starved of food. And the amount of social shares reflects that.

You can see how popular One Piece is based on the articles in this post. I can only assume no other blog on the internet has created this type of post before.

If not that, no other blog online is more trusted than Otakukart when it comes to news for . Since they specialize in it.

The shares speaks for itself. 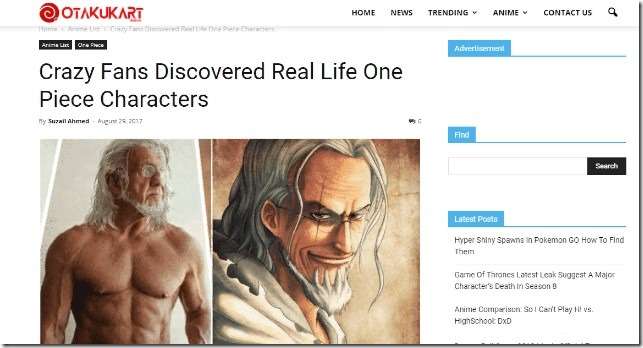 And again, Otakukart has made it multiple times throughout this post. The reason for so many shares with this post is obvious… It’s all about shock value, surprise, and uniqueness.

It’s not the kind of post you can pull out of your pocket in a hurry. It takes serious research (not the fun kind) and a lot of effort to discover it before anyone else.

And it helps that Otakukart has writers dedicated to , boosting its share count and popularity even more.

It makes me sad when someone dies, especially the way people in the anime industry die so often. The past few years have proved this.

It’s obvious why this article has so many shares, it deserves every share it managed to get.

I won’t get into the “why”, but it’s a blatant problem we see too often in the industry.

And in 10th place we have this article from Explica.co, talking about Netflix’s push into the industry.

It was big news at the time, so the shares are justified. And it’s even bigger news today since Netflix has made more moves than ever before with producing .

Personally though I’m not a fan of their catalogue so far.

Facts gathered from this data by Buzzsumo:

12 Interesting Things Anime Has Taught Me