Tokyo Treat sent me a subscription box to look at, and share it with you lot. So here we are.

They’re a company obviously based in Tokyo, Japan, with some of the sweetest snacks, foods, chocolate and more.

I’ve gone through the whole box, taste testing just so I can talk about it! 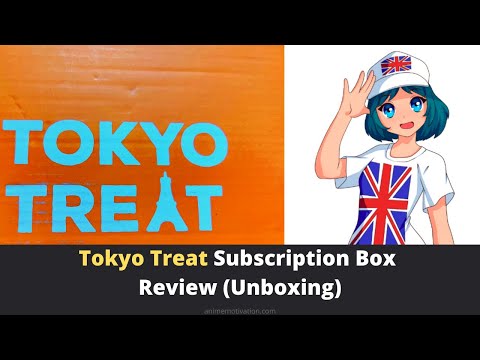 When you first open the box, there’s a bunch of pamphlets (booklets) going through Tokyo Treats subscription box, what it is…

Along with customers who’ve used and shared the product on social media.

There’s also a list of the food and drinks, each listed by name, and a short description for every one of them.

I know what Fanta tastes like, and this Fanta from Okinawa tastes pretty good.

I can’t say there’s a massive difference in the taste between UK Fanta vs Okinawa, but it’s enough to notice.

It was the only drink in the box. 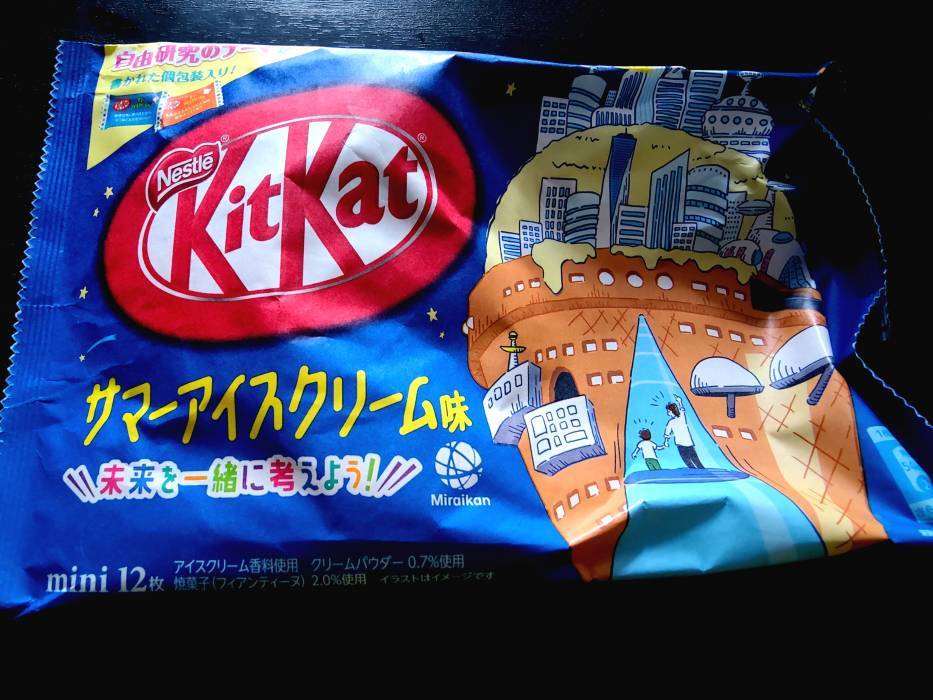 Similar to the Okinawa Fanta, comparing it to a UK Kit Kat, there’s a distinction. It’s not wildly different, but different enough.

Each Kit Kat comes in a tiny package, supposedly to stop you from throwing the whole thing down your throat. But that’s my assumption.

Either way, the design is good and the FOOD is even better, 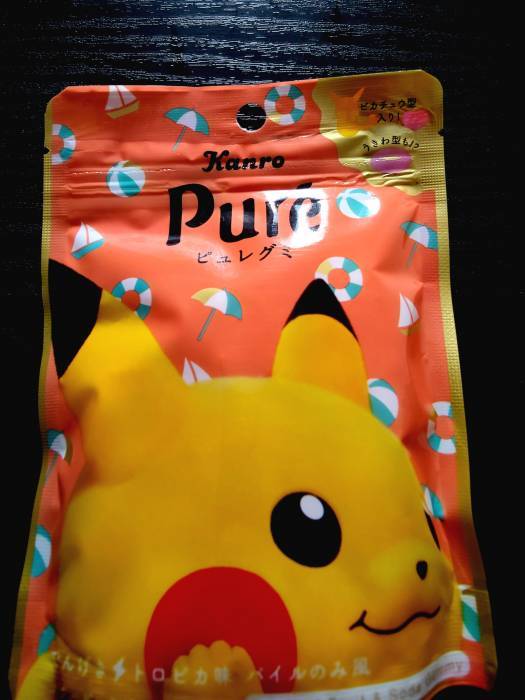 Now these one’s were legit. They remind me of Jelly Beans in a way, but I’d say better somehow.

If you grew up eating Jelly Beans you’ll know what the F I’m talking about.

I’d say this product was one of my favorites out of the whole box. 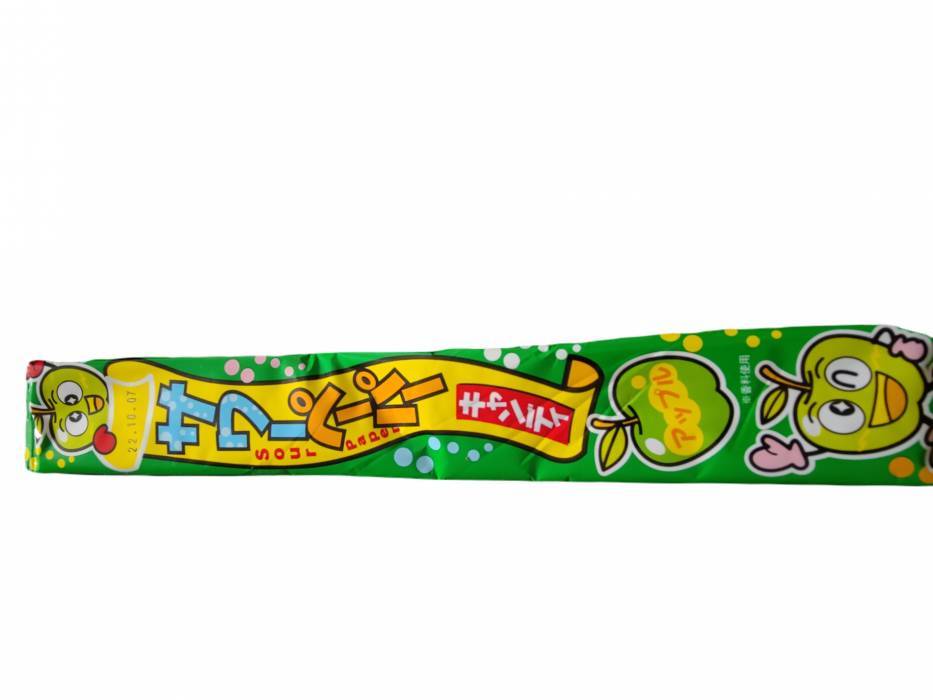 This one tasted familiar for me. I’ve always had a sweet tooth so there’s that.

I can’t put my finger on what it tastes similar to, but it’s stretchy, green, and laced with sugar. And it tastes sweet as you’d expect.

Definitely a highlight from their product range this month (September).

DoraChoco might just be the best chocolate/product in the entire box. That’s me being bias, but even still.

If you can imagine a bun, except instead of bread on the outside it’s a soft texture (similar to a pancake). And then in the middle it’s chocolate instead of lets say, veg, chicken or otherwise.

That’s the way I’d describe it. There’s only 2 inside, but what can you do. It’s legit either way. 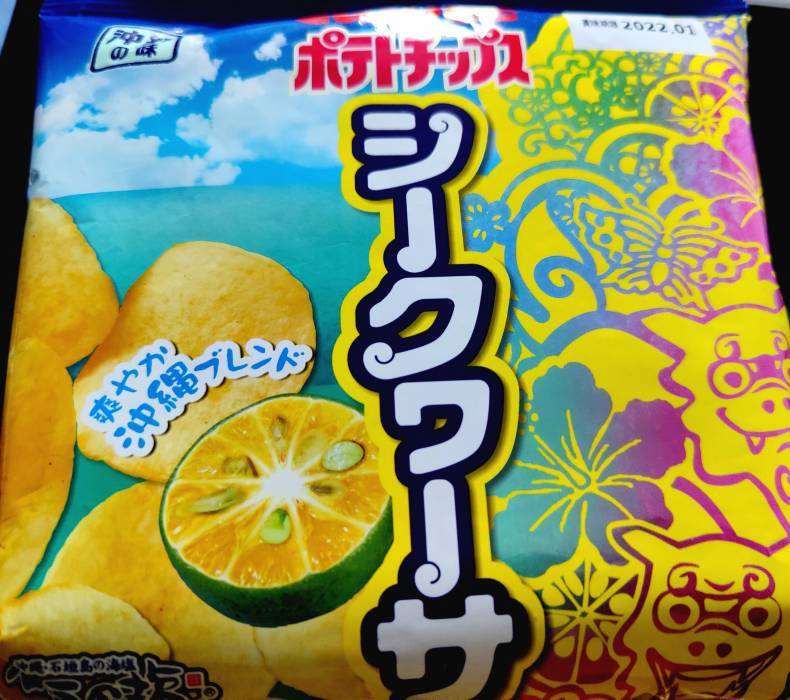 Of all the crisps in the box and products similar to crisps (or chips I guess) Calbee is high on the list.

It’s lime (or citrus) with salt slapped on top. They’re F’in good. In fact I never thought it would taste so good given the content of it.

When I go Okinawa there’s no way I’m not leaving without this one.

The packaging for this one is a bit different. In fact it’s more fun and a little creative, especially if you’re a Pokemon fan.

You open it up similar to a Pokeball in a way. Then there’s a set of crunchy corn filled with pudding (the flavor).

It’s a weird taste but I like it. More so because of the sweetness that comes from it.

When you bite into this one, you get a little rush of a certain taste. That being the Tonkatsu sauce.

It’s a tangy ish feeling, but i can taste something else there slightly. It’s crunchy regardless. 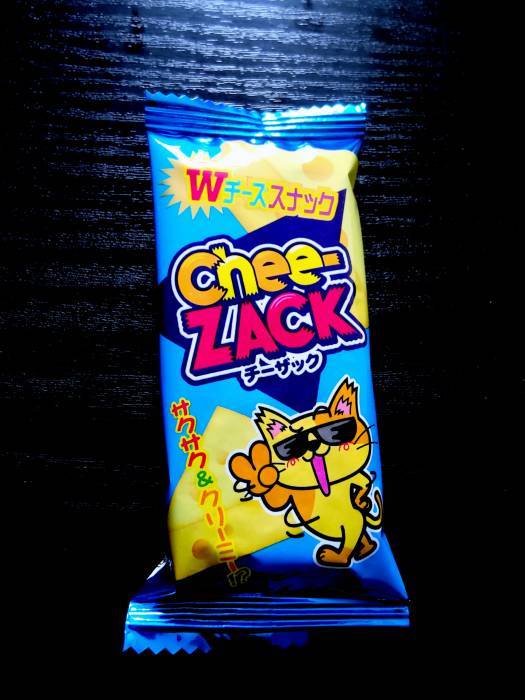 Chee-Zack reminds me of Wotsits. A type of crisp in the UK.

Not surprising I guess since Chee-Zack is a cheesy snack (no pun intended) with some salt.

Crunchy just like the others, and it’s got its own flavor. 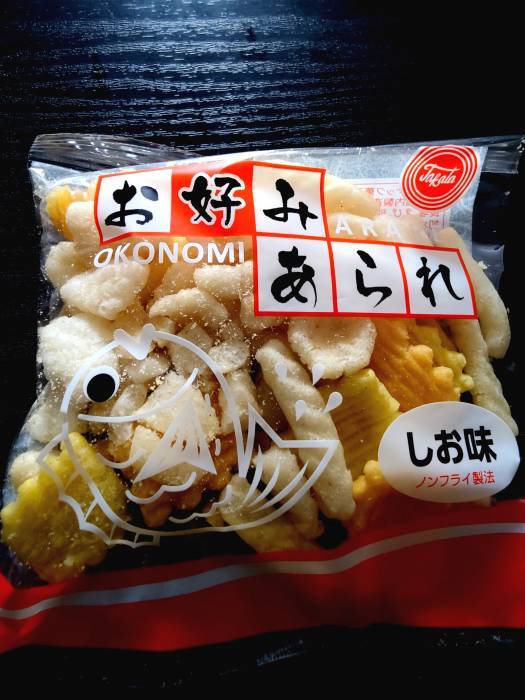 I wasn’t sure of what to make of this when I first ate it (I didn’t know what any of these products were). I purposely ate them just to get a feel without knowing about it.

These Arare are Japanese crackers. Again – Crunchy, and salty as well. 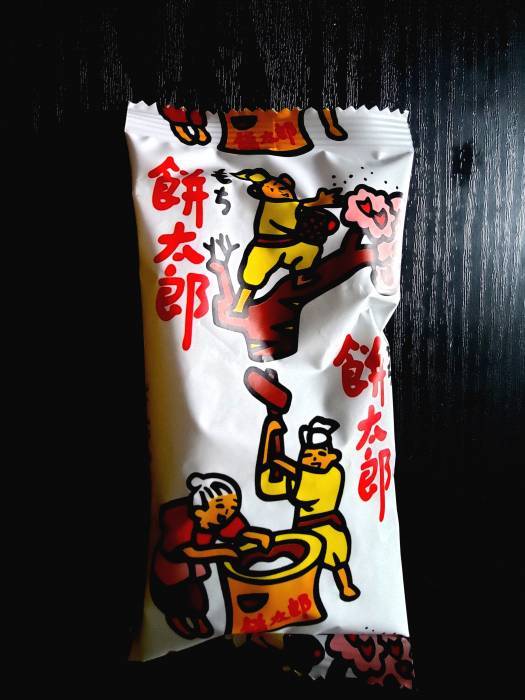 As shown on the front, this product is symbolic. Mochi in Japan is pounded, literally. And that’s what the front of the packet shows.

It’s friend Mochi with Peanut, with salt of course.

For someone who can’t stand peanuts, nuts, or anything of the sort, I’m surprise this Mochi Taro is bearable.

That speaks to the quality I guess. It’s all in the name really. Sugar is a big part of this product.

It’s sweet and crunchy, but it’s weird. Meaning I’ve never had something sweet like this with this kind of texture or crunchiness.

Easily one of my favorites from the subscription box but that goes without saying. It has sugar in it. 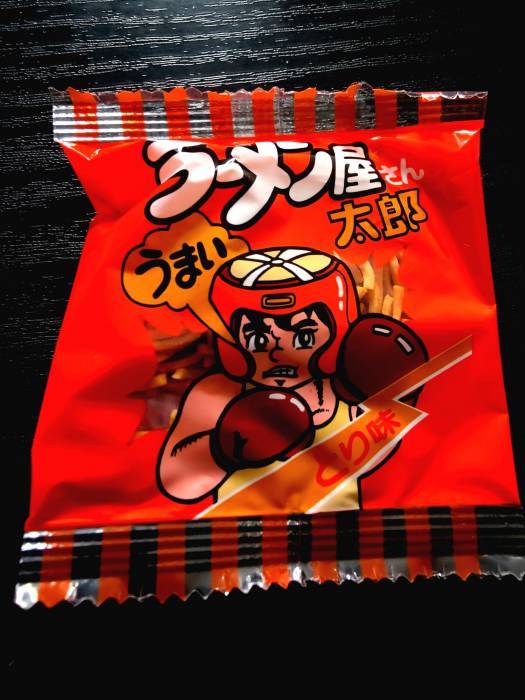 This is actually a ramen snack. I didn’t know what to make of it when I first tried it (without reading).

There’s tons of ramen, very small, and you could almost throw it all in your hand and scoff it down. 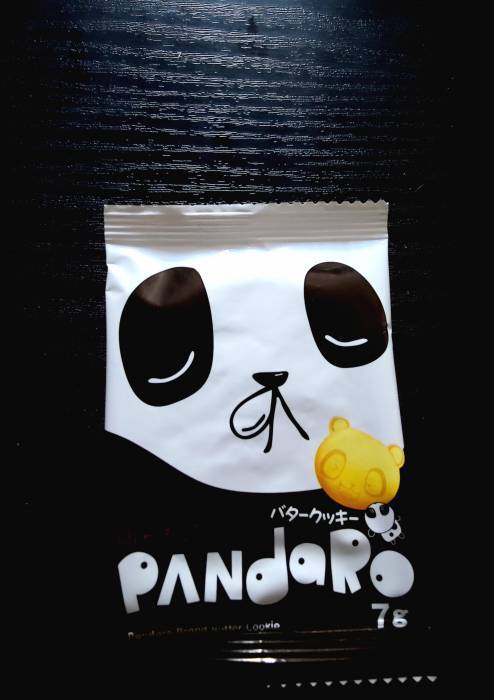 Butter cookies. It doesn’t get any better than this one. It’s guaranteed to taste good because of what it is.

It’s only a small pack as well and you can easily slide it in your pocket for later. 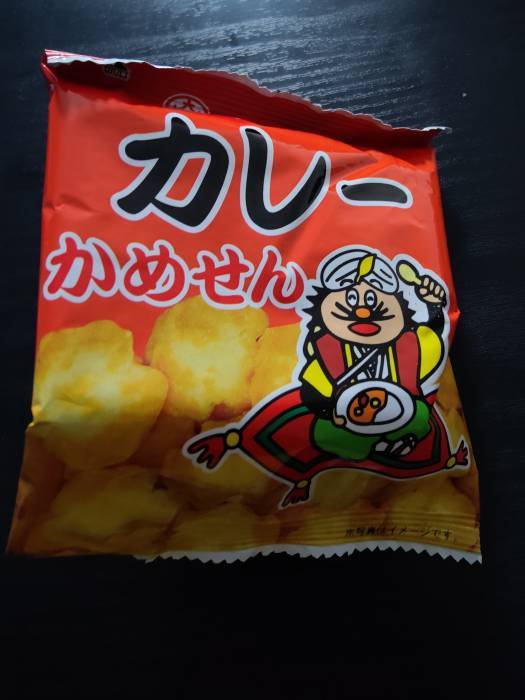 This is another product from Okinawa. Inspired by Turtle Shells (the design), it’s a spicy set of crackers.

Pretty basic and straight to the point. I’d put them high on my list of what I liked most. 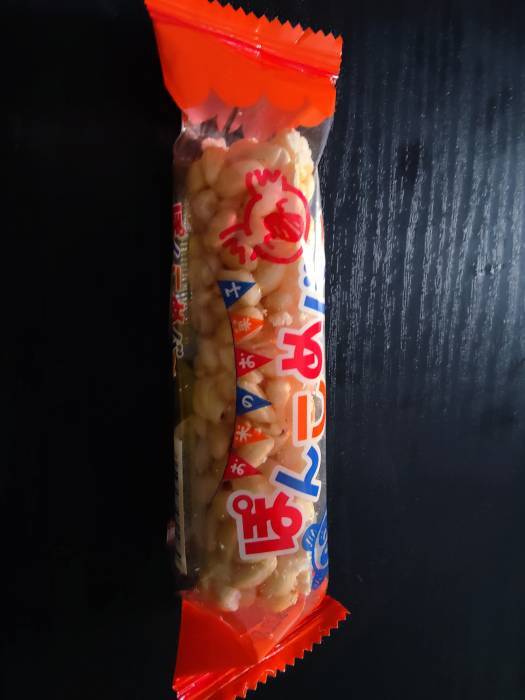 Ponkome Rice Bar is another unique one as far as taste. All I knew is it was crunchy, but I should have spotted the ingredients.

It’s rice with a sweet taste, mixed with a spicy soy sauce. Believe it or not.

The kind of thing you pick up and eat when you’re in a rush. 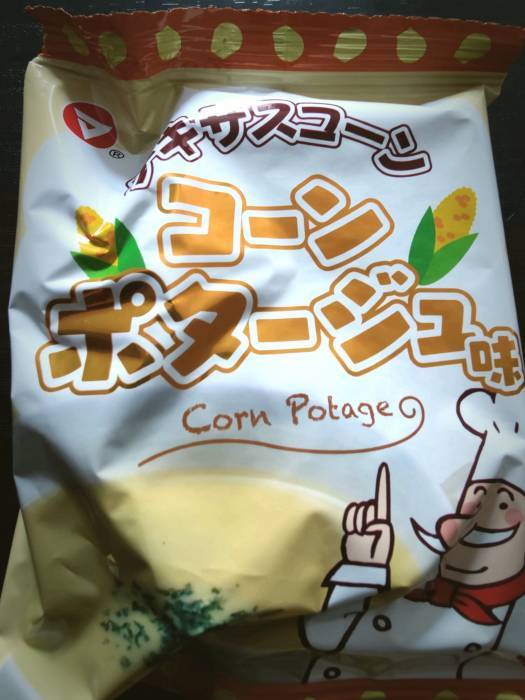 Admittedly this is one of the best for my taste buds at least. It’s salty and creamy, and tastes unusual but in a good way.

They’re only small little balls, and it’s pretty light. Not an overwhelming amount inside the packet.

And that’s the whole subscription box! 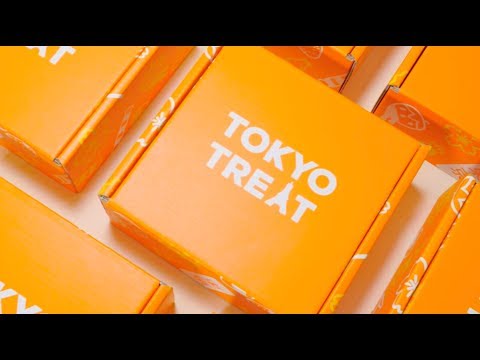