THe God Of High School, adapted from a webtoon series started way back in 2011.

Shows you that “overnight success” is a myth yet again.

The author of took inspiration from Dragon Ball (the first series without the crazy transformations).

Dragon Ball is known for its focus on pure martial arts without the dramatics. And this is a leaf took out of Dragon Ball’s book.

Yongje Park (the author) said so himself.

Crunchyroll sent me over a review copy for the first episode. 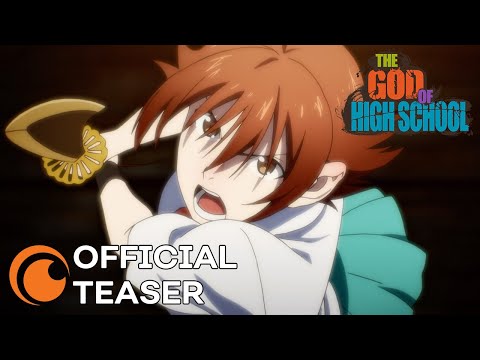 And that’s what we see in the last few minutes of the first episode of .

And a lot more that we’re bound to see.

The art style and action is true to its origins in webtoon.

The starts off with a conversation between two men while getting a massage from a couple of hotties.

Then it all goes wrong after something drops out of nowhere and destroys the island.

Considering what they were talking about, you could call it karma.

Then a brief scene between Jin and what looks like his father or grandfather, and something relating to what Jin has to set out and do.

Then you have the cliche of the protagonist waking up late for school, the first day, and rushing out on his bike to get there as fast as possible.

Not before realizing an old lady had her purse stolen and going on the hunt to stop the thief (who’s on a motorbike).

The purse story is of course “made up” for the convenience of the plot.

Yoo (a female character) joins up eventually by accident and as they both fail, Han clobbers the thief and it’s mission accomplished from that point.

And just before the fight – Han and Jin do a fist bump and then sh*t gets real to finish up the episode.

One thing I appreciate is the brief “hip hop” style scene where there’s a black character rapping about what’s happening around him (during the chase for the thief).

It’s well represented and it fits like a glove.

It looks good, but whatever happens next (and down the line) is what will decide its quality.

If Tower Of God is anything to go by (and the original webtoons quality), is in good hands.

How Tower Of God Is Competing With AOT, Demon Slayer & Black Clover for Popularity