This isn’t gonna be a list of dozens of disappointing studio shaft anime.

This time around the focus will be on a particular series. One that aired not too long ago, but failed to make an impact.

Similar to how Darling In The Franxx played out after having a good start, or how Katana Maidens had a good concept but failed to deliver.

One Of Studio Shaft’s Worst Anime: 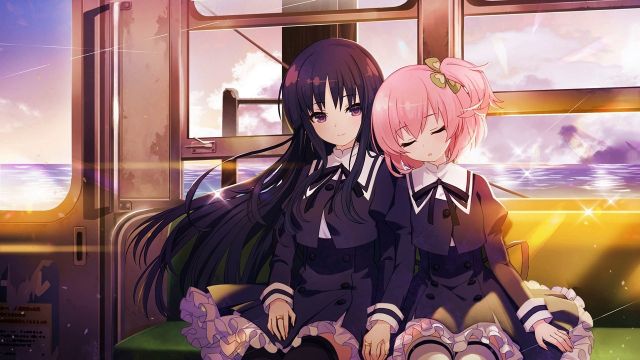 Assault Lily Bouquet was made by studio shaft. So it’s clear to see why I had big expectations.

SHAFT is known for:

is easily one of my favorite shows of all time. And Monogatari is another great series.

The way SHAFT highlights a characters emotions, and the way they express it is just different. They stand out as a studio.

Their art style is also unique, and the famous head tilt. This is one of things I expected in Assault Lily Bouquet.

I went into Assault Lily Bouquet with high expectations, especially it being a magical girl series (knowing shaft has made the best there is).

What is Assault Lily Bouquet? 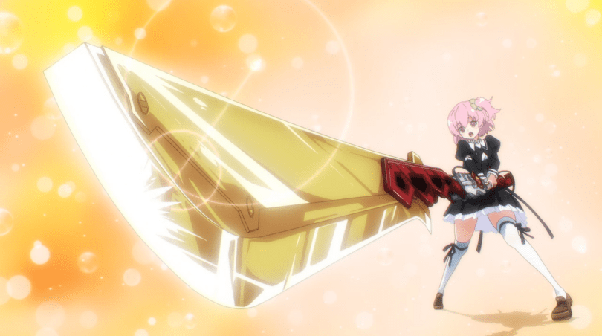 So how this anime works is each “lily” has their own unique weapon called charms, similar to a Zanpakuto in Bleach.

The exception here is it’s not just a sword, but it can change to a gun as well in a heartbeat.

Lilies fight monsters called “HUGE” and that’s the basic’s of the story.

Even the main characters look similar to Kaname and Homura from .

1st episode starts out OK, with a mild introduction and impact. Showcasing the characters, their duty as lily’s (fighting HUGE), and their capabilities as magical girls.

This continues to progress throughout the anime in bits and bobs, but “Yuri” tropes start to interfere.

This ruins the flow and gets abused to an unnecessary degree.

Aside from that the anime does start to show some so called development, as it dives into Yuyu’s past. The main character who looks like Homura.

Yuyu’s past is dark, and it effects her life even in the present timeline.

It’s a heavy burden she carries. And it’s relevant to the story, giving it potential. Losing a friend in the worst way possible tends to do that.

In spite of this, SHAFT decides not to explore and go deeper with its darker elements shown early.

It was too fluffy and ended up making the series more generic, especially as a “magical girl” series.

It made no sense knowing what Shaft is known for, but it is adapted from a novel so there’s that.

Some scenes early in this anime are good (fights and all). Episode 4 or 5 with the “gun” scene is easily one of the best.

It’s done so well. I’ve never seen a similar scene done so well for its animation and visuals.

In fact I’d say this ONE scene is so good, that it’s one of my top anime scenes in 2020. Even though the anime as a whole was a flop.

That’s what pisses me off about anime like Assault Lily Bouquet.

Episode 9 was another solid one as well towards the end.

The animation, the visuals, the action, the fight, all of it was on point. Yuri (character) literally running on water at high speed, the whole scene is sick.

But the let down of it all was getting rid of a character so soon after introducing them.

In its own way, it made the loss feel like a joke. Like you didn’t give a sh*t. That’s because the build up was mediocre.

A case of being dramatic but without any depth, purpose or weight to back it up.

Or maybe it was a case of making the “impact” so basic that it didn’t feel emotional.

The loss of a “loved” one was so rushed for the nonsense that comes later. Towards the end of the anime.

These were the best scenes in Assault Lily Bouquet.

The rest was either an “OK” character development moment, cliche Yuri, or a lack of focus on the anime’s darker elements. And their stories.

This is even more true when you realize just how many characters there are. And how many of them have meaningful backstories that weren’t exposed or used.

Related: 30+ Of The Best Anime Scenes That Are Unforgettable

The anime just wasn’t able to grow any wings

It got stuck between Yuri innuendo’s and the plot never being good or SHOCKING enough to be interesting. Or creative enough.

We’re talking about studio shaft, who are known for their plot twists.

After episode 4 it becomes obvious that nothing great is gonna come from it, despite SHAFT being the studio behind it.

Plus a disappointing series from SHAFT studios.

I’ve been wanting one to come out and drop a bomb by bringing something new to the industry again (like Madoka or any other example). But it seems none over the years have succeeded.

I’m not saying studio shaft has lost their edge, but I do wonder why they didn’t throw in their usual art style and characteristics they’re known for that people love.

I also wonder why they went with cliches without making it fresh (like Monogatari).

But that’s really more about the authors who created Assault Lily Bouquet than it is about the studio.

It’s just those are the things I associate with the studio.

That’s part of why it’s not just rated as one of their worst (MAL), but why I personally agree that it is.

But none were as disappointing as Assault Lily Bouquet in 2020.

11 Of My Favorite Anime Characters Who Relate To My Personality