Shaman King is about a tournament in Tokyo held every 500 years, produced by Xebec. And released back in 2002.

As an early days Shounen/action series – there are some quotes worth taking and sharing with the community.

Here are the best lines for fans. 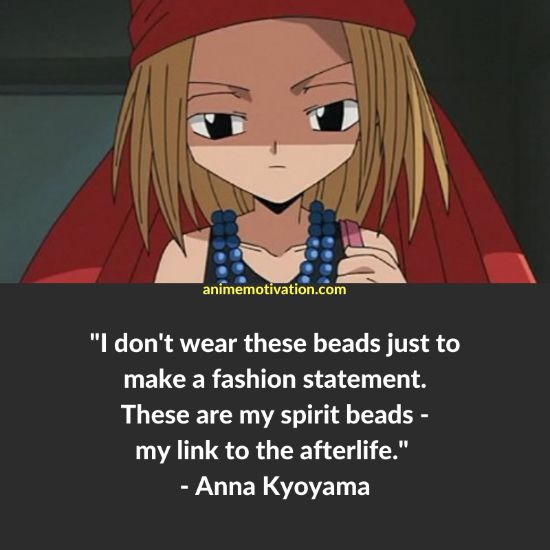 “I don’t wear these beads just to make a fashion statement. These are my spirit beads – my link to the afterlife.” – Anna Kyoyama 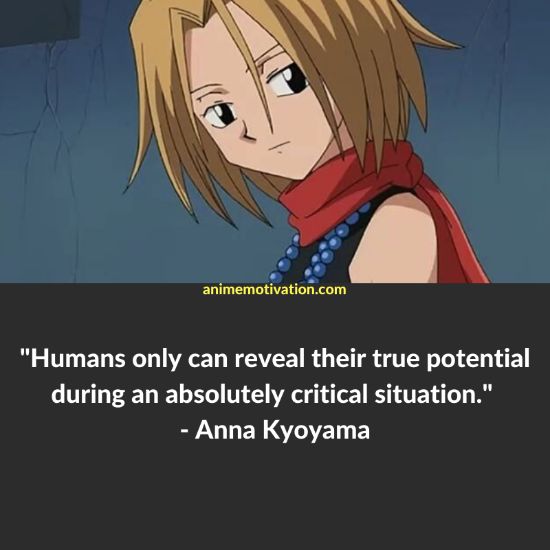 “Humans only can reveal their true potential during an absolutely critical situation.” – Anna Kyoyama 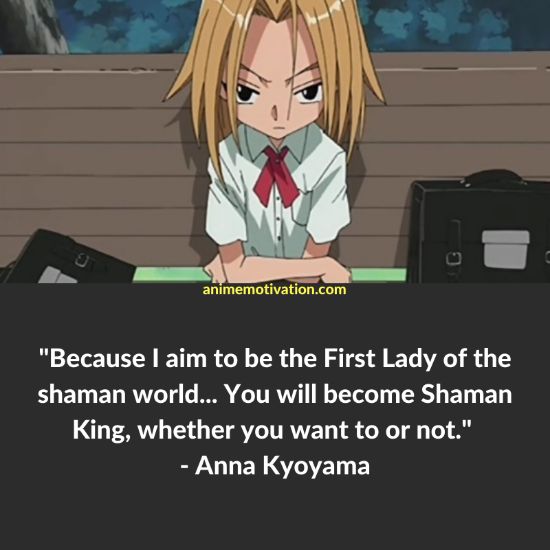 “Because I aim to be the First Lady of the shaman world… You will become Shaman King, whether you want to or not.” – Anna Kyoyama

“But some people are born lucky. They lead happy lives without even trying. Ridiculous, isn’t it?” – Hao Asakura 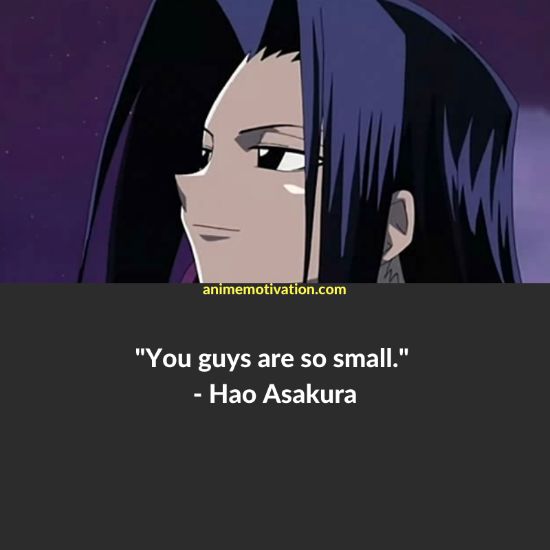 “You guys are so small.” – Hao Asakura 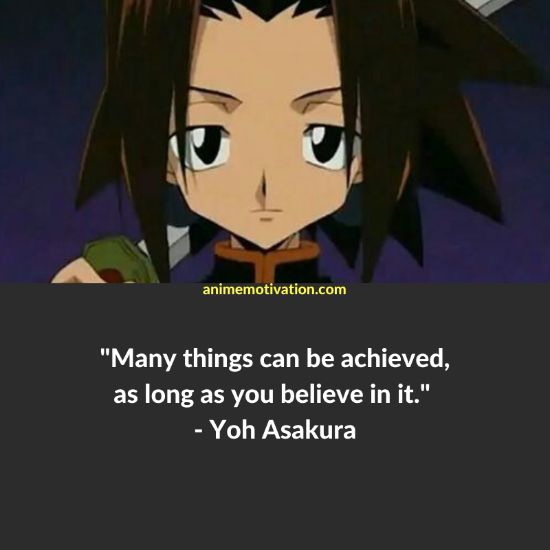 “Many things can be achieved, as long as you believe in it.” – Yoh Asakura 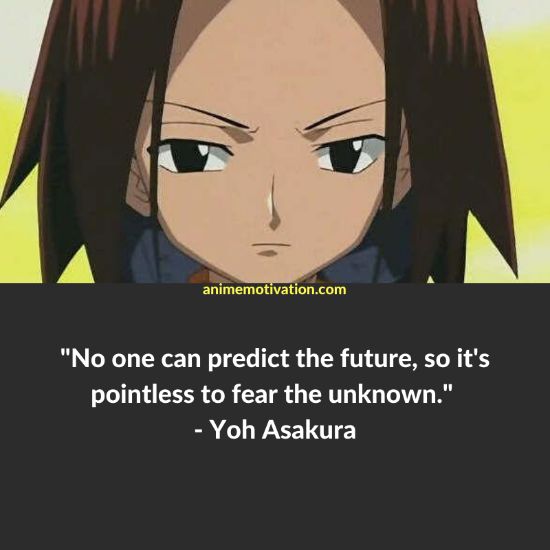 “No one can predict the future, so it’s pointless to fear the unknown.” – Yoh Asakura 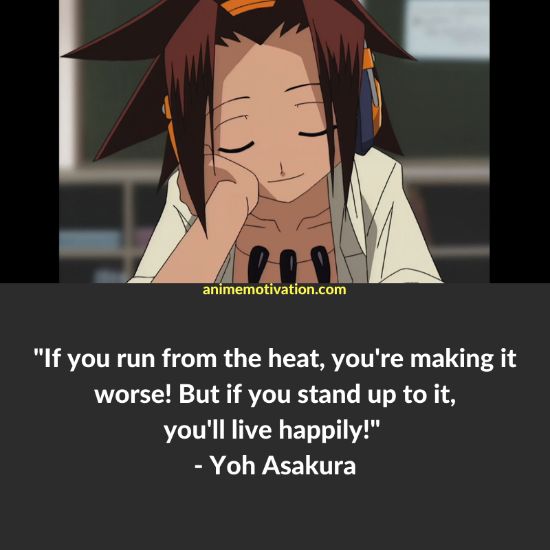 “If you run from the heat, you’re making it worse! But if you stand up to it, you’ll live happily!” – Yoh Asakura 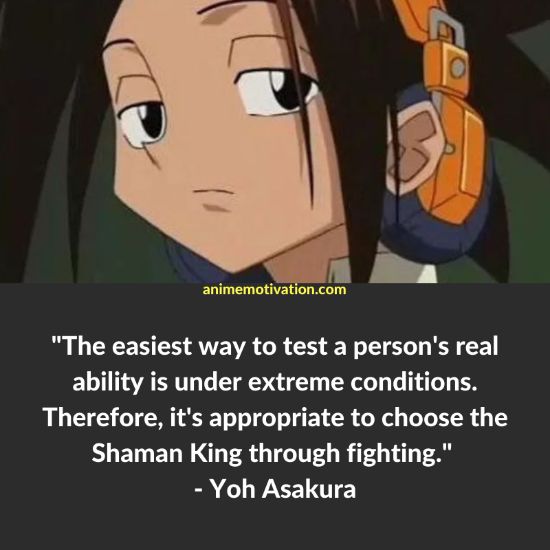 “The easiest way to test a person’s real ability is under extreme conditions. Therefore, it’s appropriate to choose the Shaman King through fighting.” – Yoh Asakura 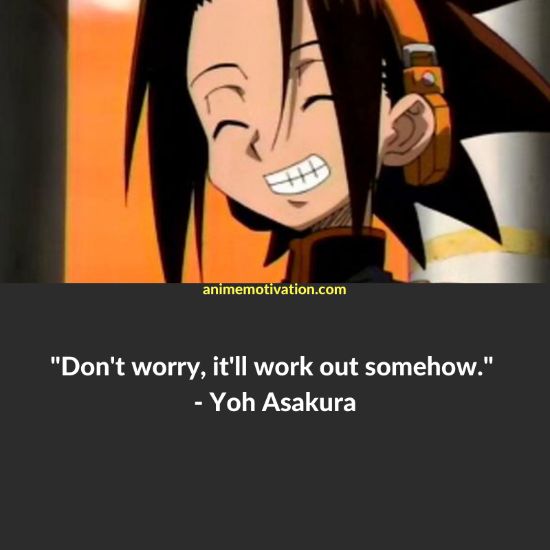 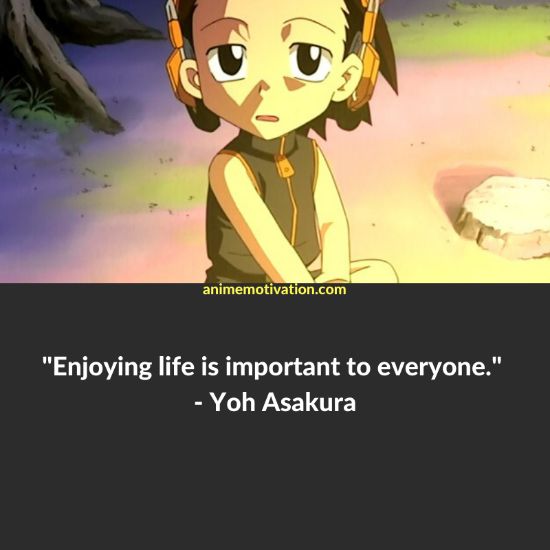 “Enjoying life is important to everyone.” – Yoh Asakura 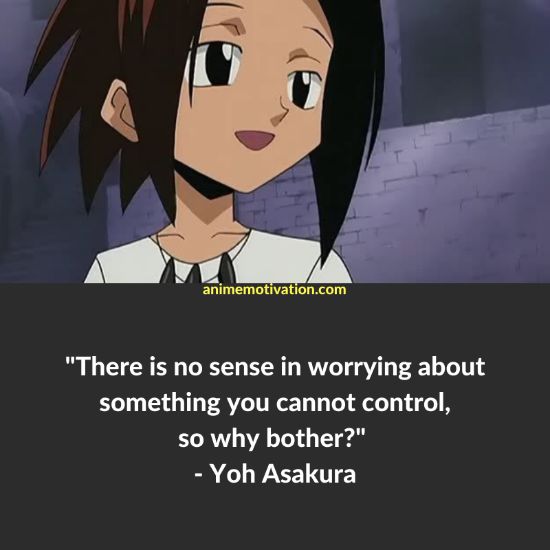 “There is no sense in worrying about something you cannot control, so why bother?” – Yoh Asakura 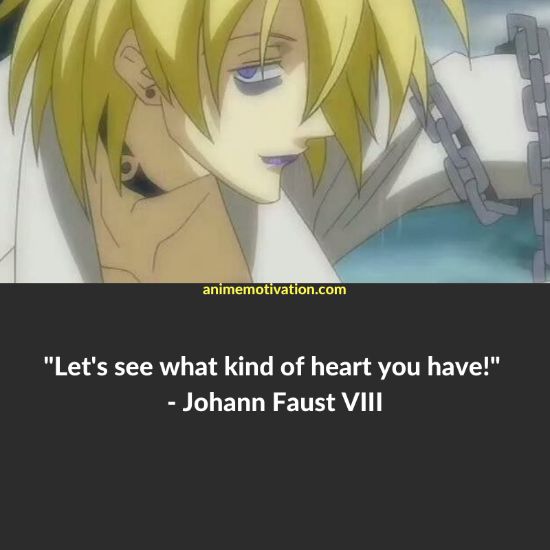 “Let’s see what kind of heart you have!” – Johann Faust VIII 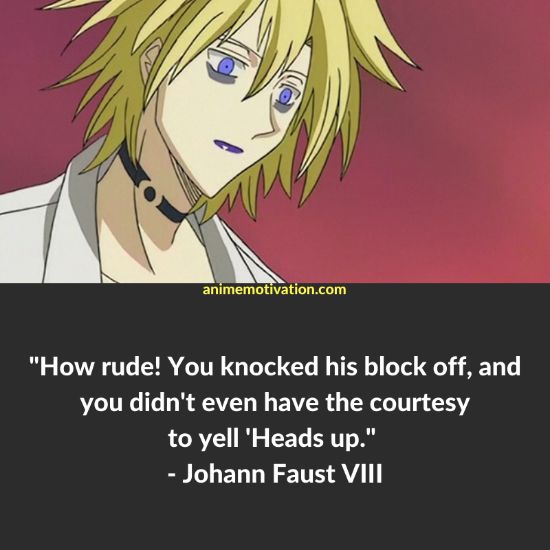 “How rude! You knocked his block off, and you didn’t even have the courtesy to yell ‘Heads up.” – Johann Faust VIII 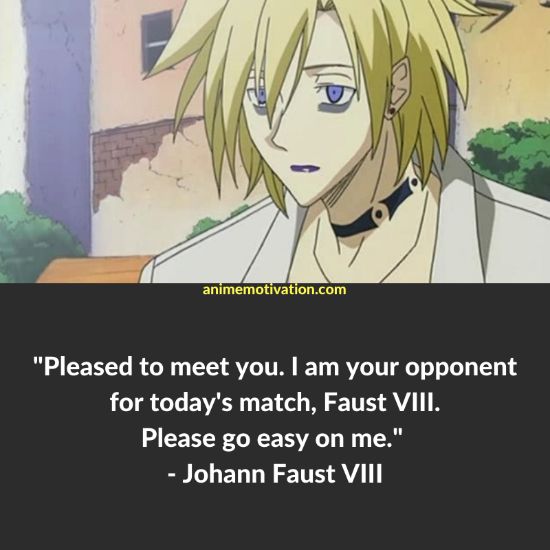 “Pleased to meet you. I am your opponent for today’s match, Faust VIII. Please go easy on me.” – Johann Faust VIII 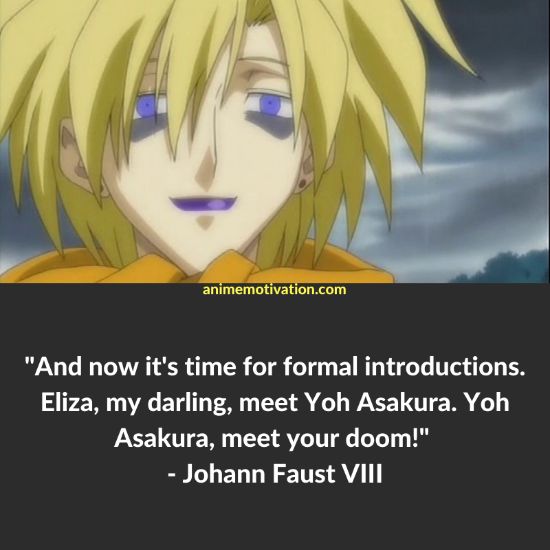 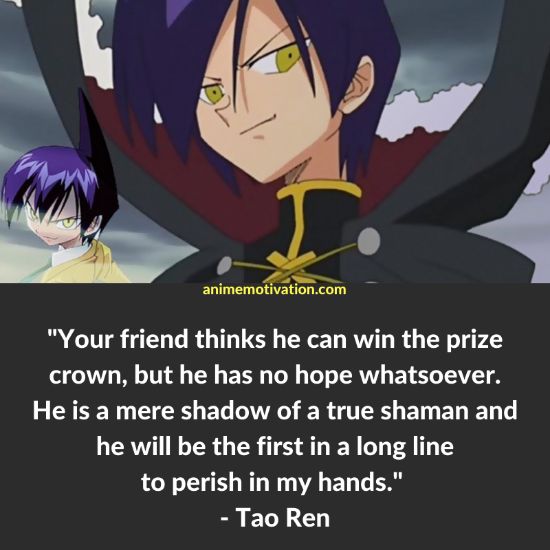 “Your friend thinks he can win the prize crown, but he has no hope whatsoever. He is a mere shadow of a true shaman and he will be the first in a long line to perish in my hands.” – Tao Ren 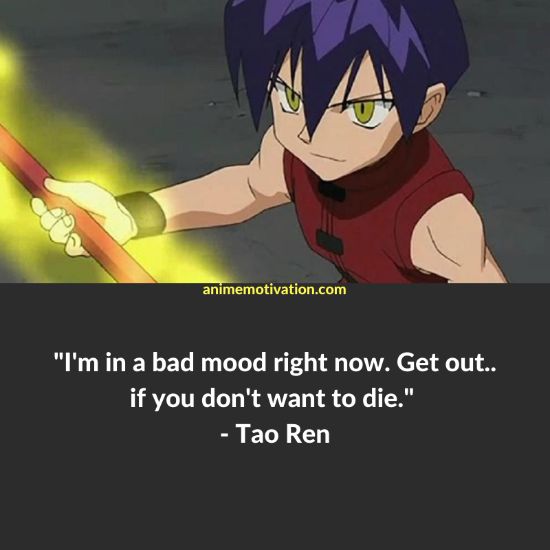 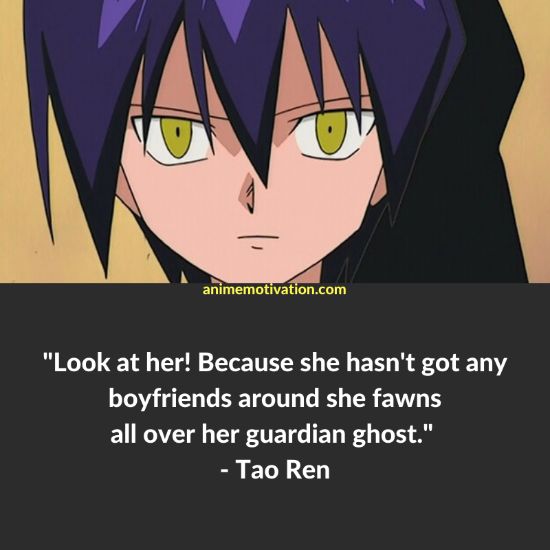 “Look at her! Because she hasn’t got any boyfriends around she fawns all over her guardian ghost.” – Tao Ren 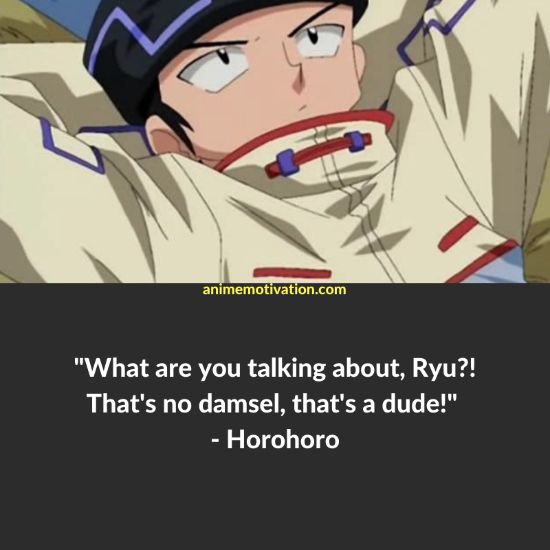 “What are you talking about, Ryu?! That’s no damsel, that’s a dude!” Horohoro 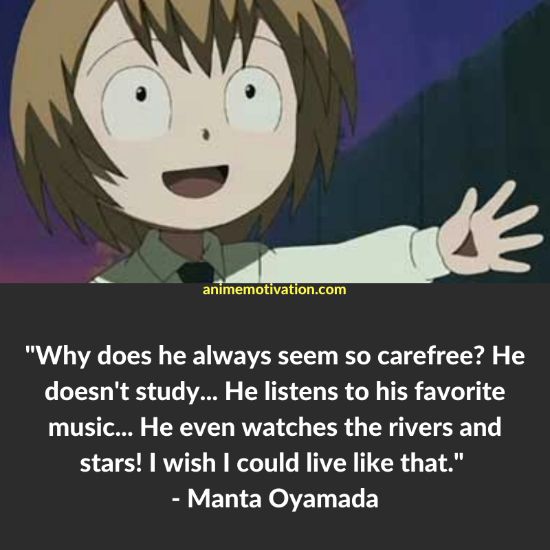 “Why does he always seem so carefree? He doesn’t study… He listens to his favorite … He even watches the rivers and stars! I wish I could live like that.” – Manta Oyamada 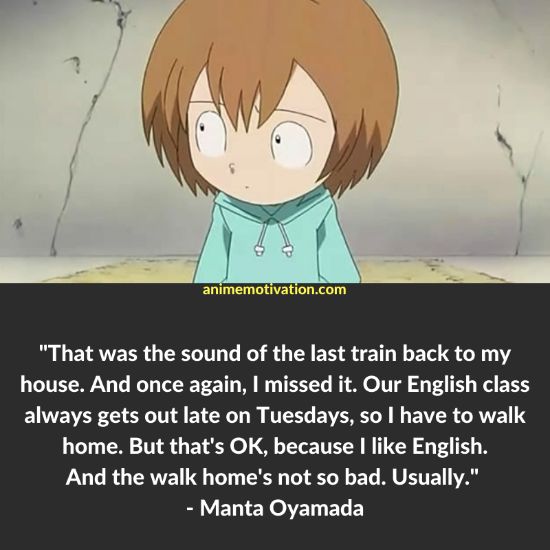 “That was the sound of the last train back to my house. And once again, I missed it. Our English class always gets out late on Tuesdays, so I have to walk home. But that’s OK, because I like English. And the walk home’s not so bad. Usually.” – Manta Oyamada 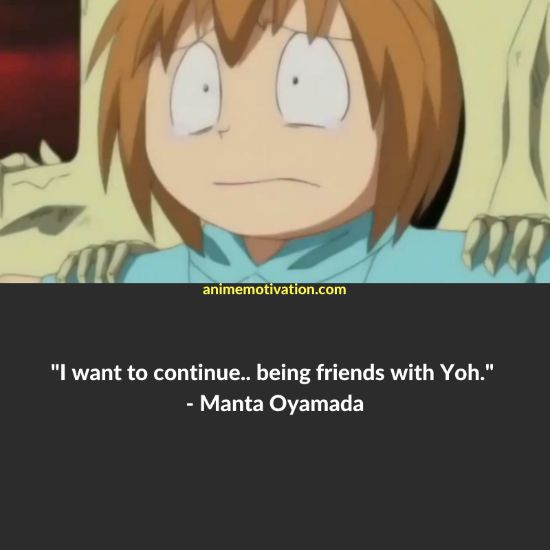 “I want to continue.. being friends with Yoh.” – Manta Oyamada 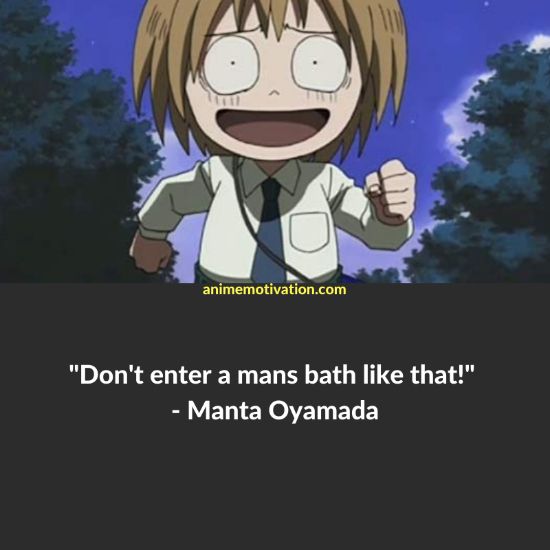 “Don’t enter a mans bath like that!” – Manta Oyamada 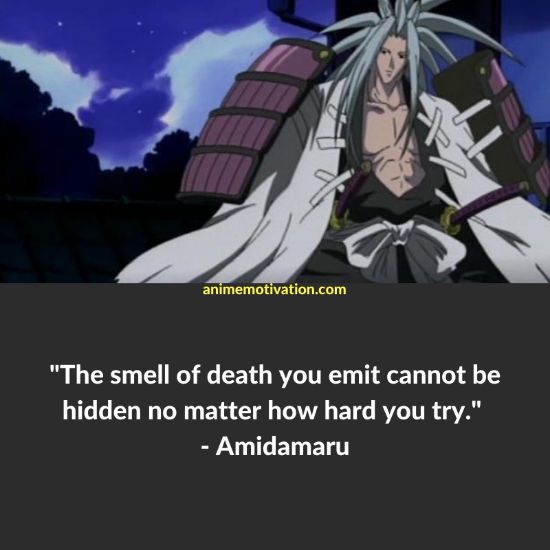 “The smell of death you emit cannot be hidden no matter how hard you try.” – Amidamaru 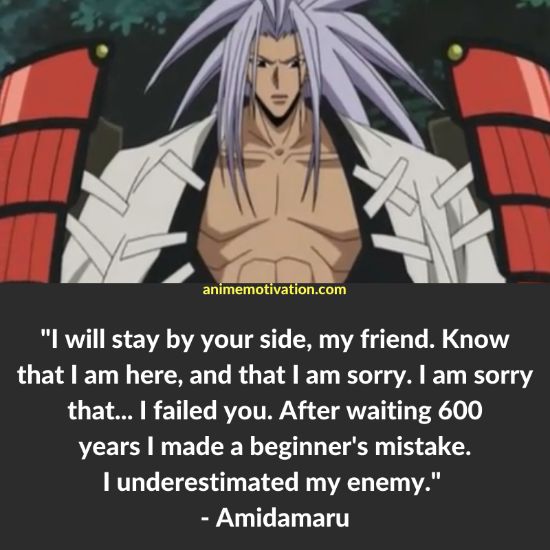 “I will stay by your side, my friend. Know that I am here, and that I am sorry. I am sorry that… I failed you. After waiting 600 years I made a beginner’s mistake. I underestimated my enemy.” – Amidamaru 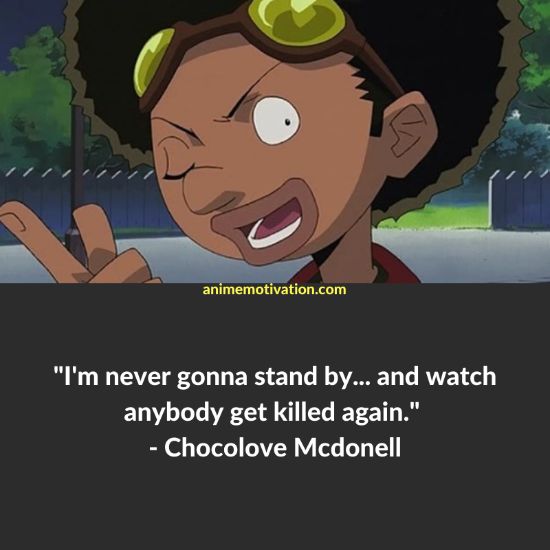 “I’m never gonna stand by… and watch anybody get killed again.” – Chocolove Mcdonell 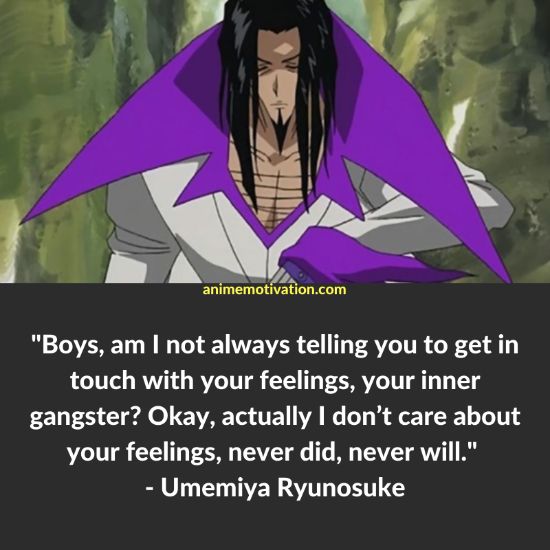 “Boys, am I not always telling you to get in touch with your feelings, your inner gangster? Okay, actually I don’t care about your feelings, never did, never will.” – Ryunosuke Umemiya 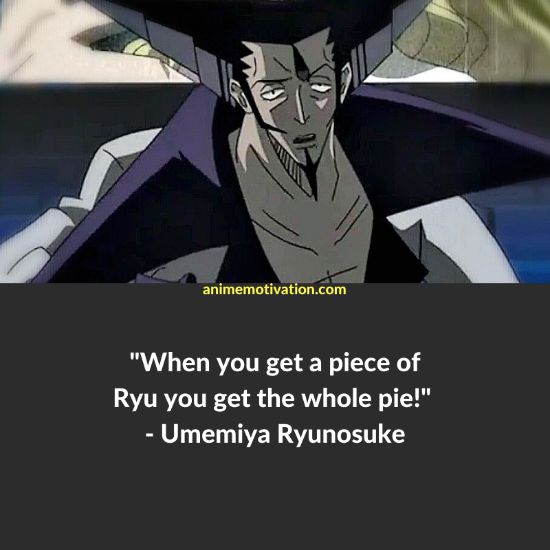 “When you get a piece of Ryu you get the whole pie!” – Ryunosuke Umemiya

All The Greatest Haganai Quotes Of All Time That Go Deep!