This is a little “old” at this point but i wanna talk about it anyway.

I’ve noticed a conversation in the last week around the word “trap” in the community. In fact I saw it on Quora being asked if it’s “OK” to use the word. 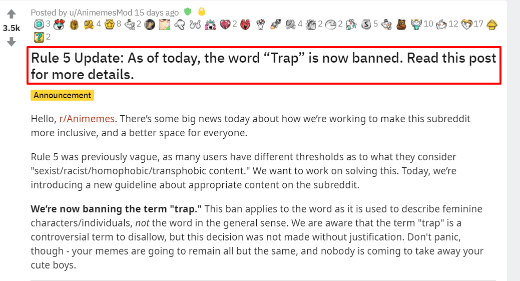 This conversation obviously started from Reddit, when the moderators of r/animemes banned the word.

The backlash and even memes that were made ABOUT the moderators decisions is what blew the whole thing up.

It’s why the news spread far and wide in the community.

Why is the term “trap” a bad thing?

“The word “trap” when used to describe individuals has been controversial since its inception, and even more so in recent years. Broadly speaking, most communities readily consider the term to be a slur.

The offensive nature of the word lies in the implication that individuals are trying to trick (“trap”) others and by extension are not valid in how they present their gender. The use and misuse of the term in reference to both characters and people often results in the erasure of trans people and dismissal of their validity.” – Reddit moderators

According to Reddit’s announcement, the word “trap” has “always” been controversial since its inception…. And most communities consider it a slur. Which isn’t true.

Most fans will tell you how ridiculous this point is and many did in the reddit post.

Also their last line claiming it erases “trans” people is probably the most interesting point in the announcement.

If anything it celebrates them, and doesn’t erase it in the slightest.

Most fans are more aware than people realize, and many never “misuse” the term or use it in a way that’s malicious.

In The USA they’ve been pandering to the loud minority for a while now. Especially within the last 10 years.

Companies in the US pander because:

Look, I’m all for equality and all that jazz. But this isn’t it. Reddit is pandering hard and even subtly pushing their own agenda’s, and silencing anything they don’t agree with.

This isn’t the first time and won’t be the last, especially not for the community seeing as it’s under attack in the west.

Is the N word banned from r/animemes? (rhetorical question)

Stereotypes and all kinds of sh*t is pushed with the N word, especially by people who aren’t even from the culture (or give a F).

I’m sure it’s not the only word that hasn’t been touched or deemed “offensive” by Reddit moderators, so it’s interesting to see how TRAP was banned so fast and with so much force.

Even a trans person is confused by Reddit’s “ban”

“I’m a transgender person… I don’t think that was the right call. The word does have a meaning that if used properly won’t cause any harm, the issue only comes from misuse of the words both because people don’t understand it or don’t understand that being transgender and being a Crossdresser are different things.

I would be more positive if we decided to educate people instead of censoring words. It’s only a matter of time before Femboy becomes a “slur” for almost the exact same reasons. The word wasn’t created for hate, and was mostly used for the right reasons, any way to call a girl a man is offensive and hurtful, like it is the other way around.”

When you have the very people you’re claiming a word is “offending” turn around and argue with your point… You know you’re doing something wrong.

Reddit pandered to the loud minority, the same loud minority who’s vocal on Twitter and other platforms when the world doesn’t cater to their entitled bullsh*t.

They’re called a “loud minority” for a reason, because most people aren’t like that.

What are your thoughts on the word “trap” in the community?

Uzaki Chan Haters, And How This Anime Girl Is STILL Causing Controversy