Quintessential Quintuplets is an about the 5 sisters Nino, Yotsuba, Itsuki, Miku and Ichika.

All 5 of them are doing awfully at school and their rich father coincidentally hires Fuutarou, a smart student to become their home teacher.

With 2 seasons and a movie, this wholesome ‘s quotes center around romance, pain, sadness, the fun times between characters, and the important life lessons to be learned.

Let’s focus on these types of quotes and more. 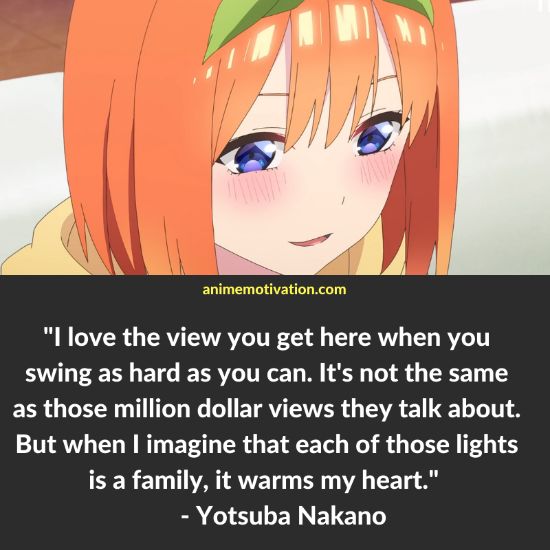 “I love the view you get here when you swing as hard as you can. It’s not the same as those million dollar views they talk about. But when I imagine that each of those lights is a family, it warms my heart.” – Yotsuba Nakano 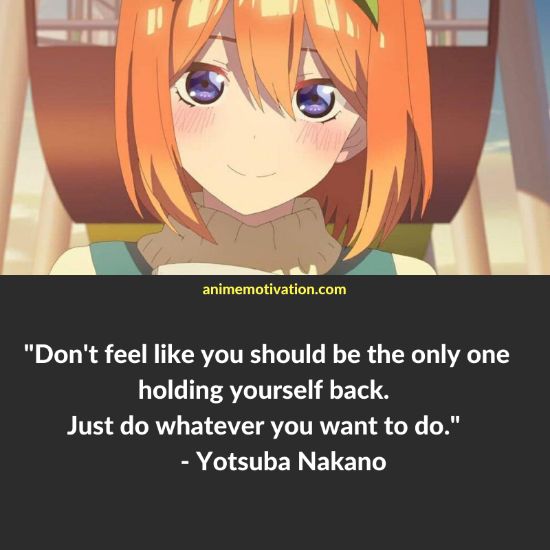 “Don’t feel like you should be the only one holding yourself back. Just do whatever you want to do.” – Yotsuba Nakano 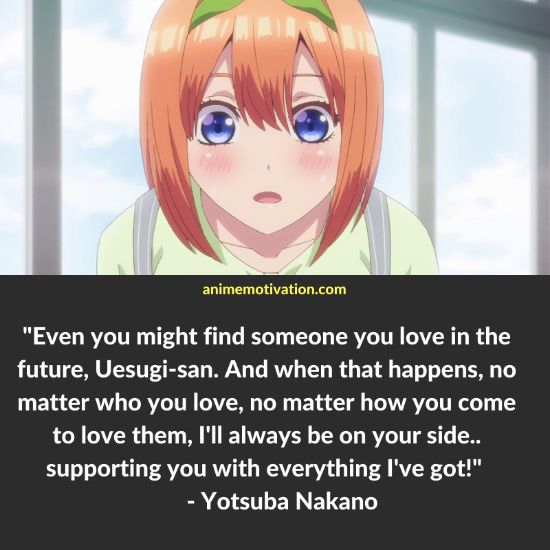 “Even you might find someone you love in the future, Uesugi-san. And when that happens, no matter who you love, no matter how you come to love them, I’ll always be on your side.. supporting you with everything I’ve got!” – Yotsuba Nakano 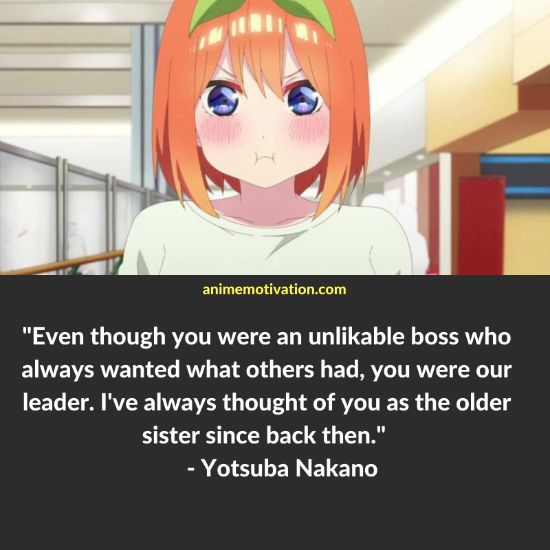 “Even though you were an unlikable boss who always wanted what others had, you were our leader. I’ve always thought of you as the older sister since back then.” – Yotsuba Nakano 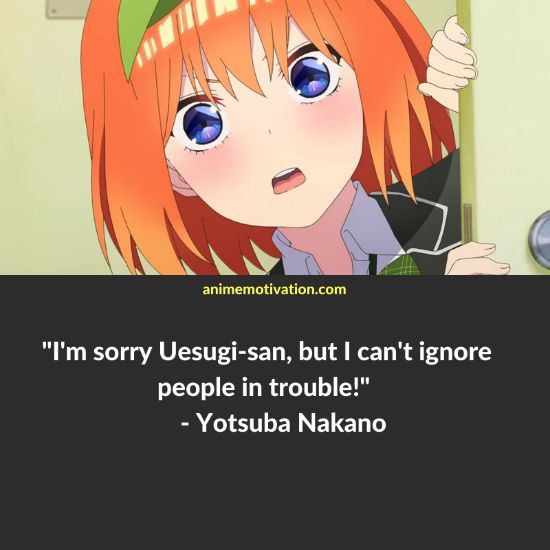 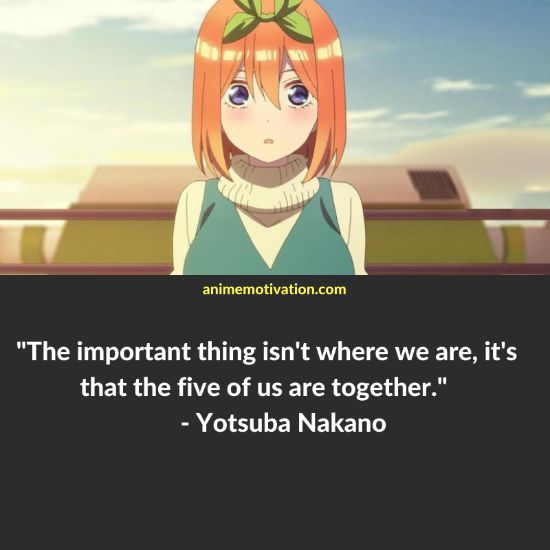 “The important thing isn’t where we are, it’s that the five of us are together.” – Yotsuba Nakano 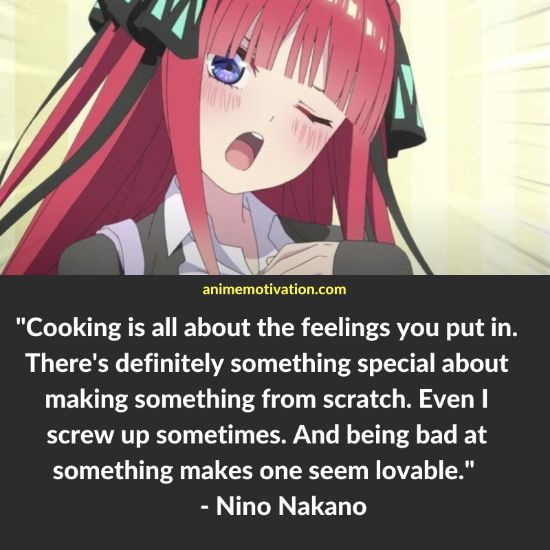 “Cooking is all about the feelings you put in. There’s definitely something special about making something from scratch. Even I screw up sometimes. And being bad at something makes one seem lovable.” – Nino Nakano 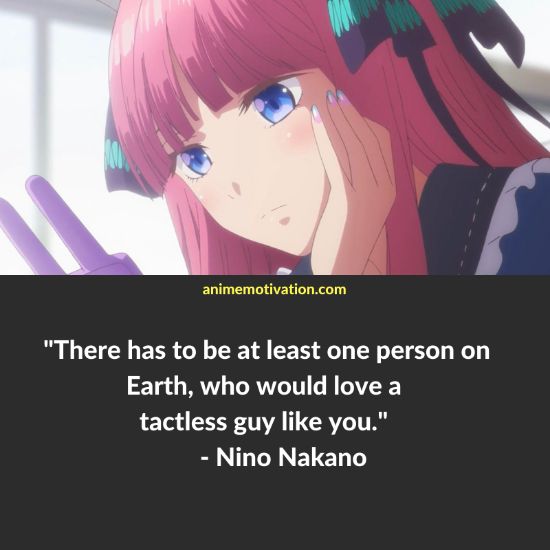 “There has to be at least one person on Earth, who would love a tactless guy like you.” – Nino Nakano 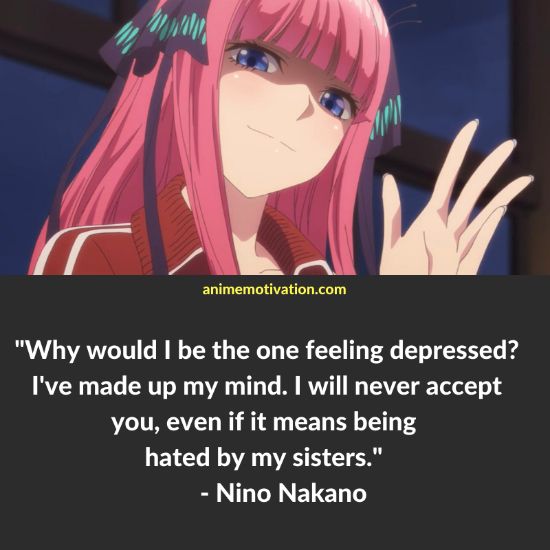 “Why would I be the one feeling depressed? I’ve made up my mind. I will never accept you, even if it means being hated by my sisters.” – Nino Nakano 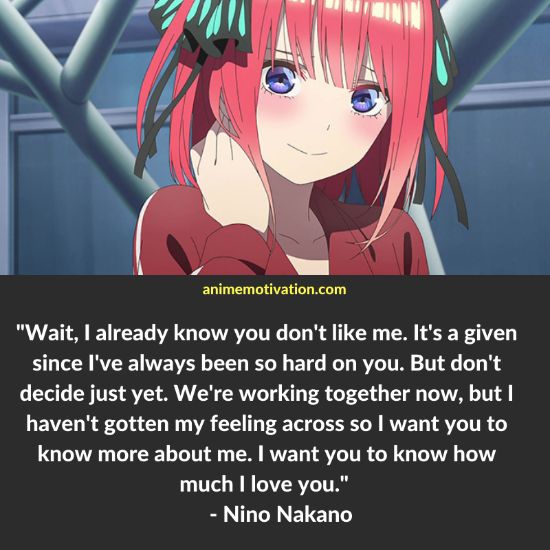 “Wait, I already know you don’t like me. It’s a given since I’ve always been so hard on you. But don’t decide just yet. We’re working together now, but I haven’t gotten my feeling across so I want you to know more about me. I want you to know how much I love you.” – Nino Nakano 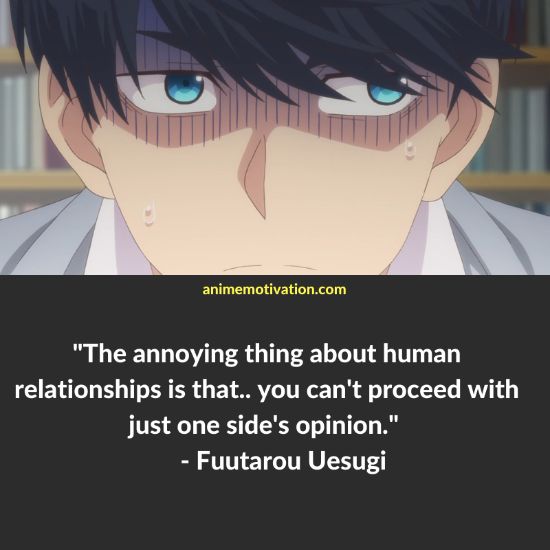 “The annoying thing about human relationships is that.. you can’t proceed with just one side’s opinion.” – Fuutarou Uesugi 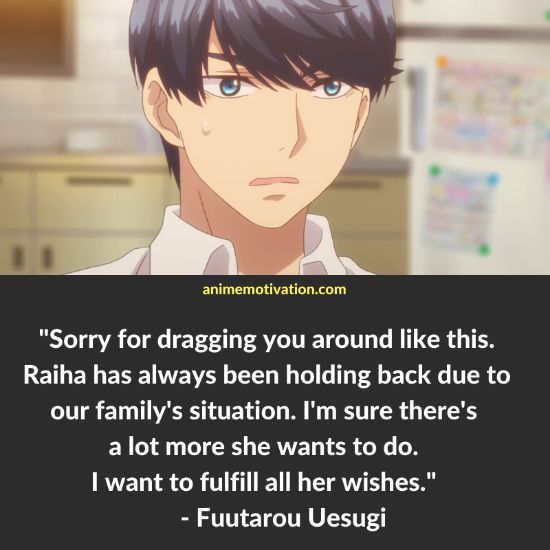 “Sorry for dragging you around like this. Raiha has always been holding back due to our family’s situation. I’m sure there’s a lot more she wants to do. I want to fulfill all her wishes.” – Fuutarou Uesugi 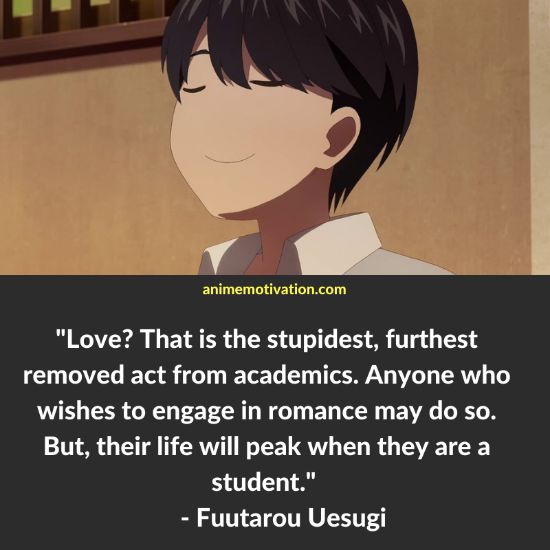 “Love? That is the stupidest, furthest removed act from academics. Anyone who wishes to engage in romance may do so. But, their life will peak when they are a student.” – Fuutarou Uesugi 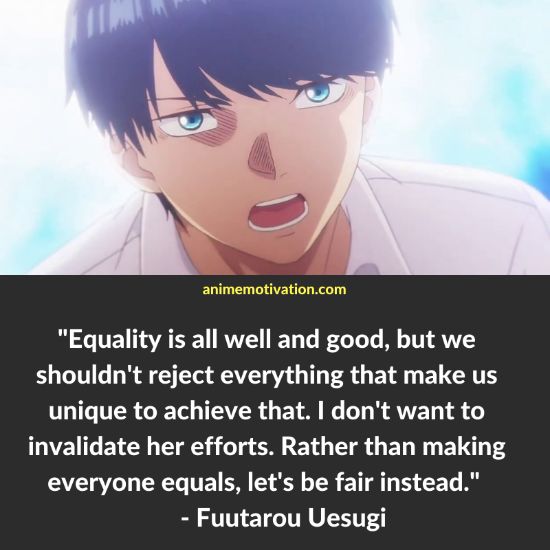 “Equality is all well and good, but we shouldn’t reject everything that make us unique to achieve that. I don’t want to invalidate her efforts. Rather than making everyone equals, let’s be fair instead.” – Fuutarou Uesugi 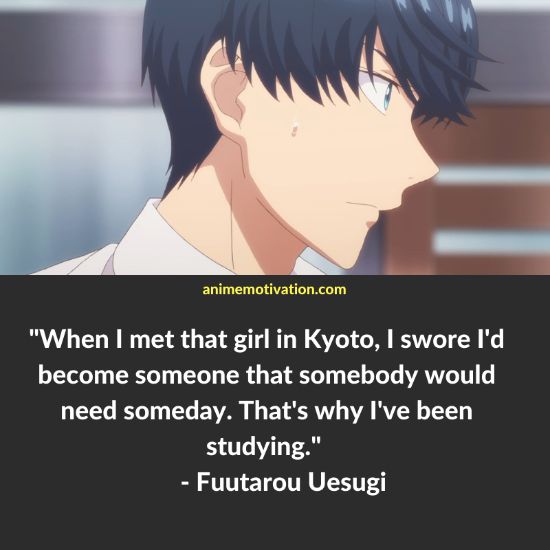 “When I met that girl in Kyoto, I swore I’d become someone that somebody would need someday. That’s why I’ve been studying.” – Fuutarou Uesugi 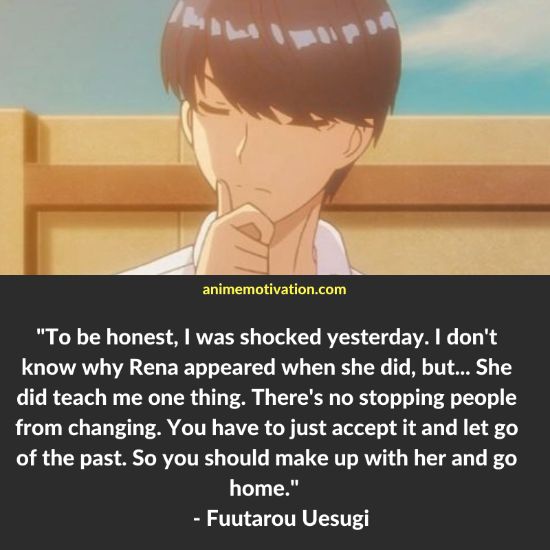 “To be honest, I was shocked yesterday. I don’t know why Rena appeared when she did, but… She did teach me one thing. There’s no stopping people from changing. You have to just accept it and let go of the past. So you should make up with her and go home.” – Fuutarou Uesugi 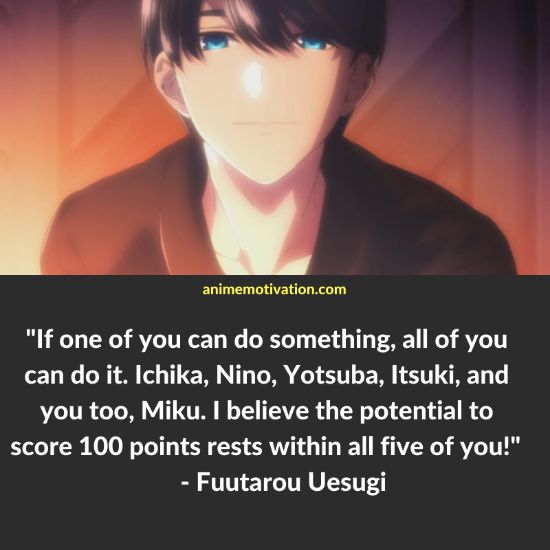 “If one of you can do something, all of you can do it. Ichika, Nino, Yotsuba, Itsuki, and you too, Miku. I believe the potential to score 100 points rests within all five of you!” – Fuutarou Uesugi 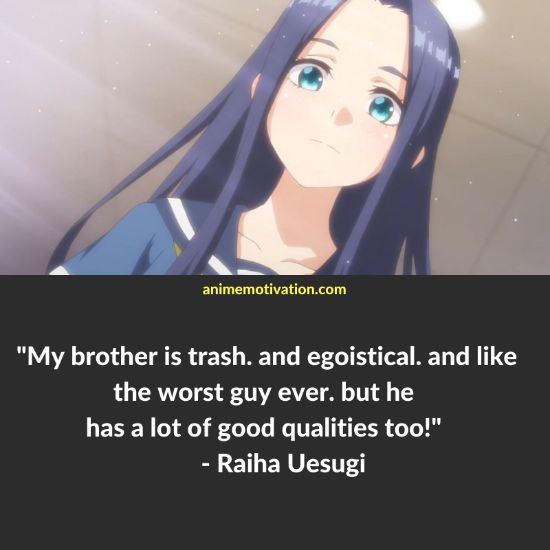 “My brother is trash. and egoistical. and like the worst guy ever. but he has a lot of good qualities too!” – Raiha Uesugi 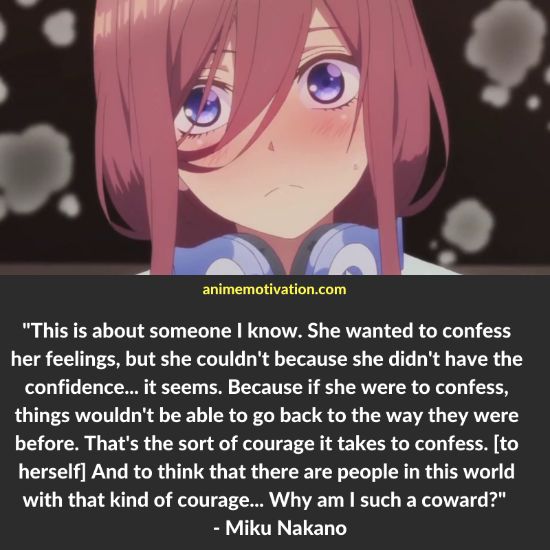 “This is about someone I know. She wanted to confess her feelings, but she couldn’t because she didn’t have the confidence… it seems. Because if she were to confess, things wouldn’t be able to go back to the way they were before. That’s the sort of courage it takes to confess. [to herself] And to think that there are people in this world with that kind of courage… Why am I such a coward?” – Miku Nakano 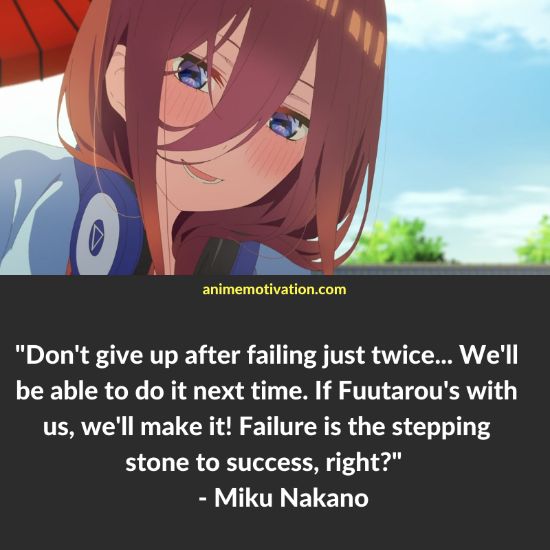 “Don’t give up after failing just twice… We’ll be able to do it next time. If Fuutarou’s with us, we’ll make it! Failure is the stepping stone to success, right?” – Miku Nakano 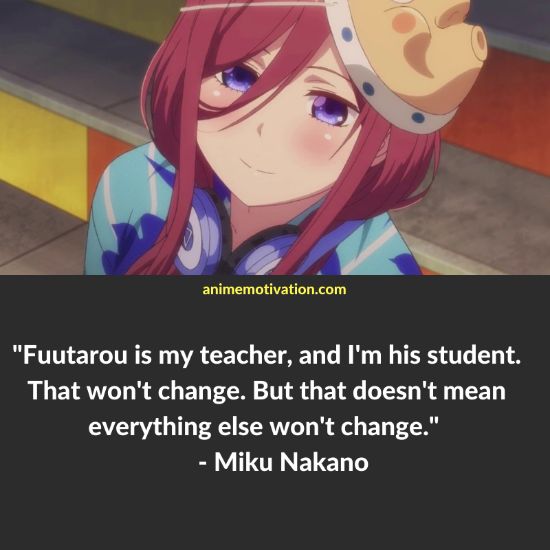 “Fuutarou is my teacher, and I’m his student. That won’t change. But that doesn’t mean everything else won’t change.” – Miku Nakano 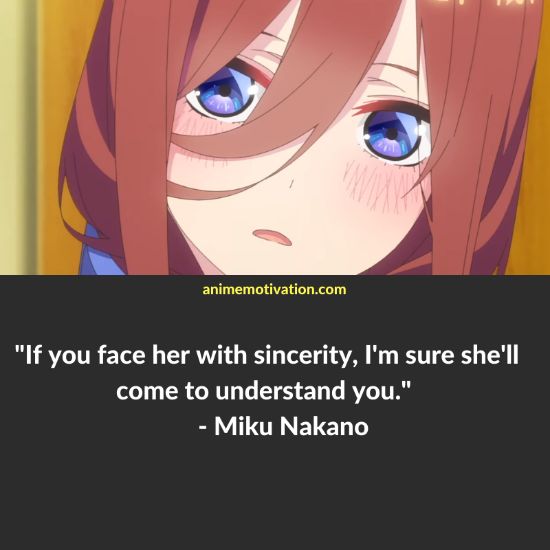 “If you face her with sincerity, I’m sure she’ll come to understand you.” – Miku Nakano 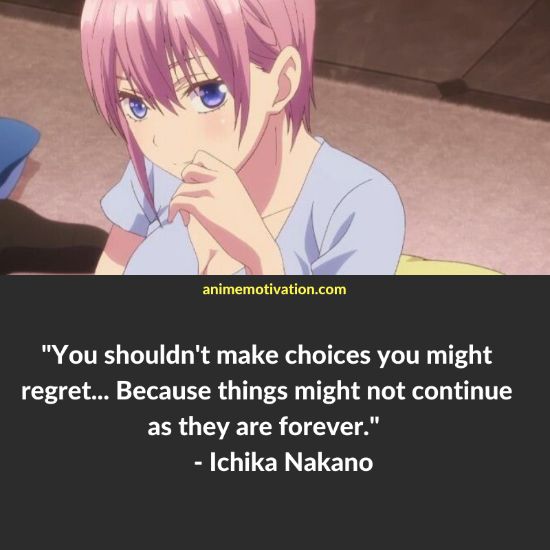 “You shouldn’t make choices you might regret… Because things might not continue as they are forever.” – Ichika Nakano 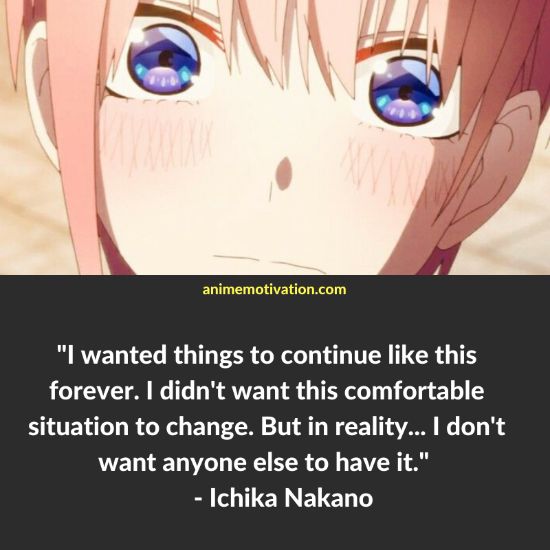 “I wanted things to continue like this forever. I didn’t want this comfortable situation to change. But in reality… I don’t want anyone else to have it.” – Ichika Nakano 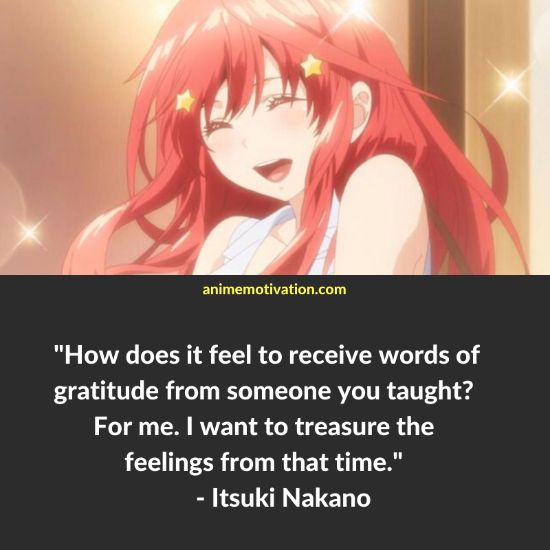 “How does it feel to receive words of gratitude from someone you taught? For me. I want to treasure the feelings from that time.” – Itsuki Nakano 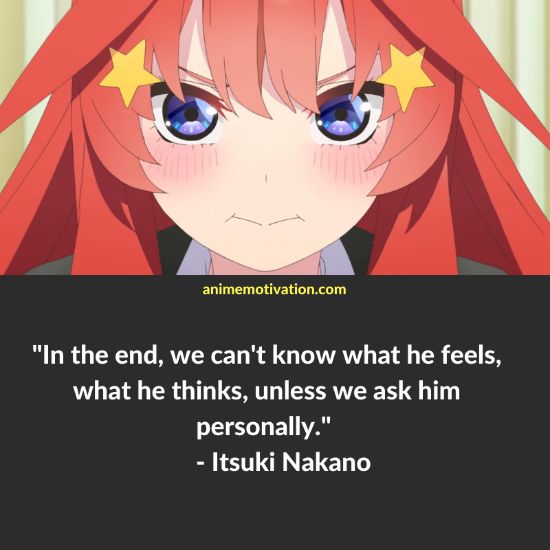 “In the end, we can’t know what he feels, what he thinks, unless we ask him personally.” – Itsuki Nakano 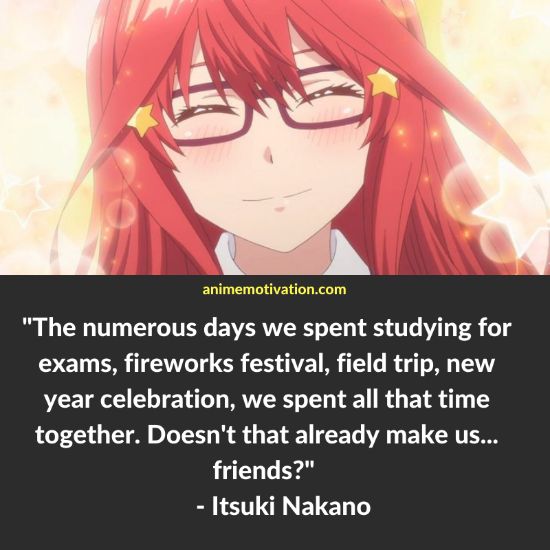 “The numerous days we spent studying for exams, fireworks festival, field trip, new year celebration, we spent all that time together. Doesn’t that already make us… friends?” – Itsuki Nakano

The 35+ Greatest Tonikaku Kawaii Quotes About Life And Romance!