Doraemon is an series that’s famous in countries like and other parts of the world.

It’s not your ordinary , but it’s legendary at this point in time.

That said, after all this time no one had a problem with the bath scenes and other innuendo’s the portrayed, innocently.

That has of course changed in the internet world we live in where people want things BANNED left right and center.

For genuine reasons or otherwise.

“The act of looking into the bath is sexual harm, not an act of mischief. It is an act that can be deeply traumatic for the victimized woman and can instil a lifelong fear of engaging with the man or taking a bath,” the petition reads in part.

“I think that portraying such an act as a mere carelessness or mischief in animation for children with strong social influence such as Doraemon will lead to disregarding sexual harm.”

Believe it or not, the petition started in Japan 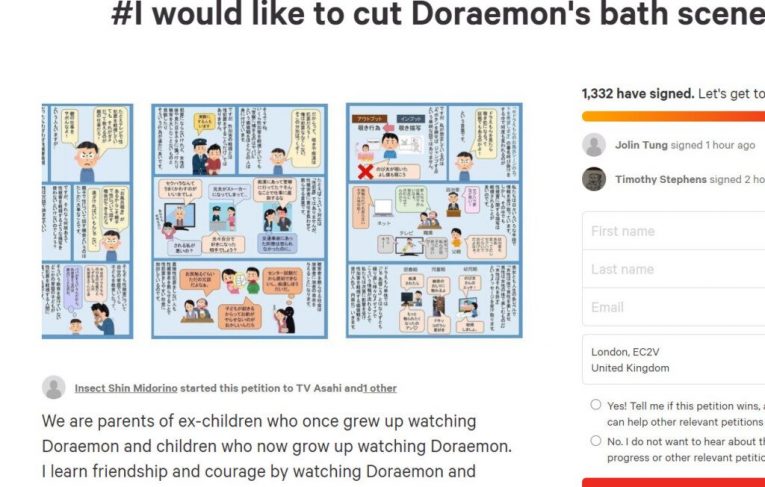 I’m not sure where this came from or why, but it happened in the past week.

It’s understandable why the petition exists and the concerns some parents have. I just wonder how much of an “actual” affect this has on kids growing up, girls in particular, to warrant this seemingly strong reaction.

Views are mixed, not everyone agrees

As mentioned by World Buzz via Change Org:

“In response to questions such as ‘but what about the depiction of violence and theft in Doraemon? Why are you focusing on the bath scenes instead?’ and ‘Isn’t it natural for kids to be interested in sexuality?’, the petition explains that while both are true, Doraemon’s bath scenes does not portray these messages appropriately at all.

“In modern society, few adults do not understand that violence and robbery are bad. However, adults (and sometimes educators) often forgive sexual mischief, such as ‘because it’s a boy’ and ‘it’s healthy’, and “furo peeping is a crime that causes more damage than [a joke in an anime].’

“Even if a child is interested in life or death, it would not be good to kill a person. Similarly, if you are interested in sexuality, you should tell them how to satisfy that interest without using crime. Content such as sex education picture books for children already exists, so it is possible to utilize them,” the petition explains.”

Violence is a good point, considering violence is often ignored in or media. But so much energy is put into sexual scenes or concepts.

Not that it isn’t an issue when it is, but many times other serious aspects are overlooked for something that’s a non-issue in reality, but dramatized to seem more important than it is.

The Objectification Of Male Anime Characters