Nagatoro San, or “Don’t Toy With Me Miss Nagatoro” is an destined for attention. Courtesy of the manga.

From the moment it was announced in 2020, a little controversy stirred up.

And when the trailer was announced later 2020, the reactionary Twitter-maniacs responded in droves. 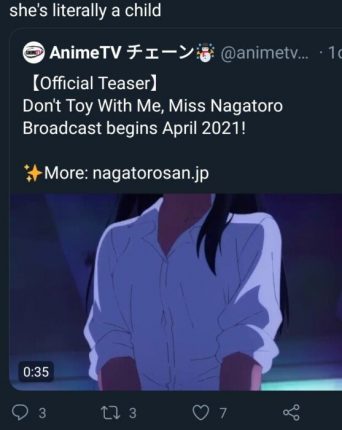 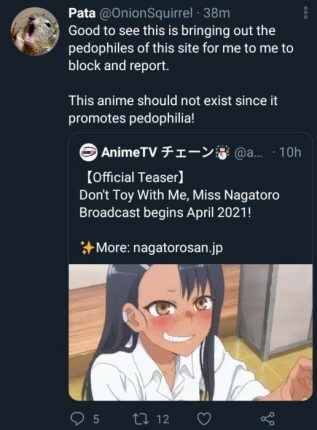 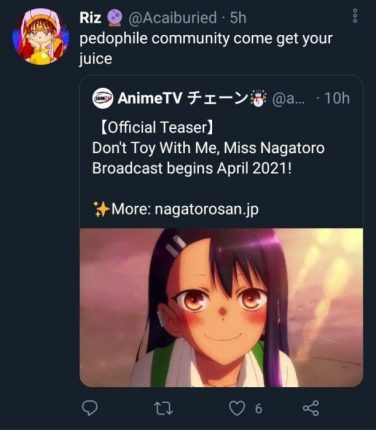 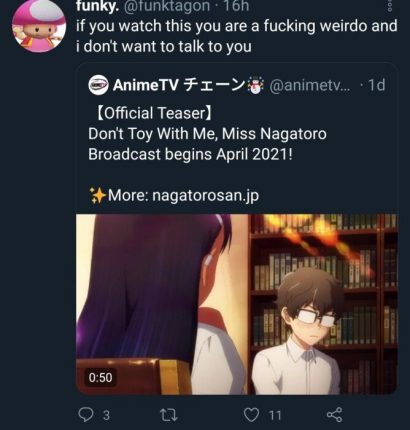 But then it died down and the flame burnt out. There was a slight controversy with some people claiming Nagatoro is black, which isn’t the case.

Once the released though in April 2021, the pot started to boil.

The cause? Bullying themes in Nagatoro 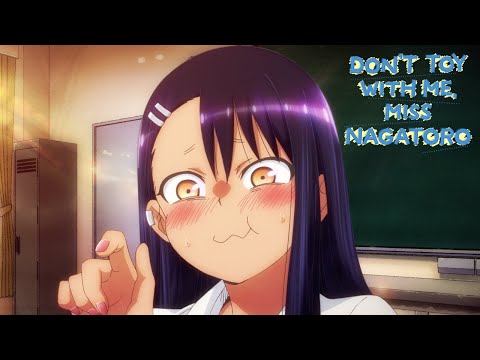 Nagatoro is an about about the main character, Nagatoro, who teases her Senpai.

Initially in the story (according to the ), what she’s really doing is bullying the poor guy. And calling it “teasing” as an excuse to justify her behavior.

After all, Naoto (the male MC) has no balls whatsoever. And couldn’t stand up for himself if his life depended on it.

He’s wrapped around Nagatoro’s finger, and so she’s able to dictate all the outcomes from a female point of view.

He’s there for so called comic relief, even though Nagatoro becomes a better person down the line. So the “teasing” becomes more legitimate. 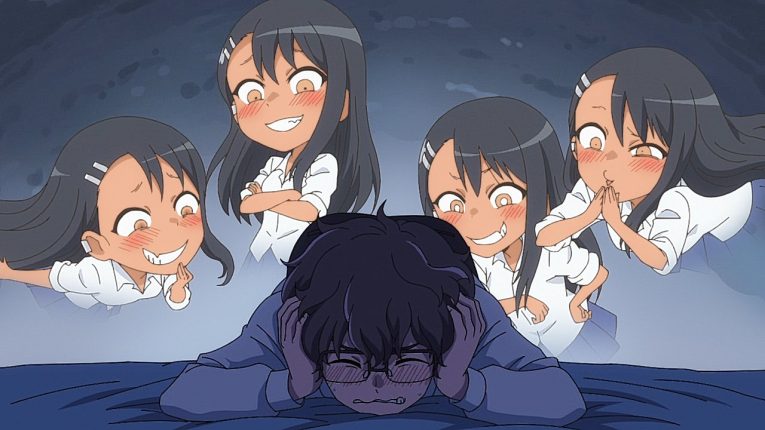 Let’s start off with the first episode in the series.

Naoto, an , is seen minding his own business. And then things happen here and there which lead to Nagatoro becoming a part of his world.

It all starts with Naoto’s manga drawings which he drops on the floor and she picks it up and starts teasing him.

During these scenes it’s lightweight and comedic silliness more than anything else.

She’s an absolute b*tch later on.

Even fans who aren’t usually triggered felt triggered by it. 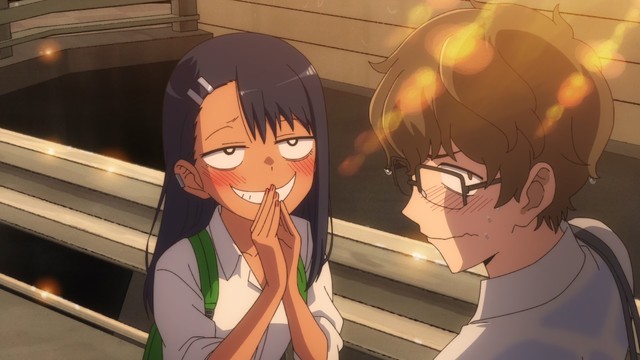 One example is here, at the end of the first episode.

Nagatoro pushes Naoto into the river, and like a simp he crawls out of it, dries off his clothes, and goes on about his day as if nothing happened.

Even Nagatoro herself questions why he allows these things to happen. In fact it’s mentioned at least once in the first episode, meaning she’s well aware of her actions.

Which he never does. 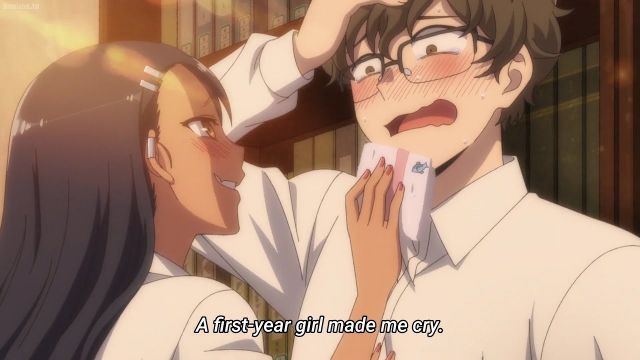 There’s even a point where it gets so bad (not long after she’s introduced), that she makes Naoto cry.

As shown by the subtitles.

It’s at and from this point that Nagatoro has complete control over the guy. He’s spineless and cowardly, and despite the abuse and intrusion he does nothing about it.

He doesn’t even get angry.

He takes it on the chin, while Nagatoro gets more than a few good laughs out of his misery and how wimpy he is.

In the 2nd episode, many things go down.

It’s the usual interfering with Senpai’s peace and quiet as he does his own thing. And manipulating Naoto for her own amusement.

Remember what I said before: she has Naoto wrapped around her finger.

In one scene Nagatoro, as the lights go off, jumps on top of Naoto against his will, grabs his crotch, and gets embarrassed afterwards.

Despite the context of what goes down here, the scene moves on and it’s all a good laugh.

But things DO get better from this point forward.

Related: 9+ Of The Best Anime Shows Like Nagatoro San

This is the double standards I’m talking about 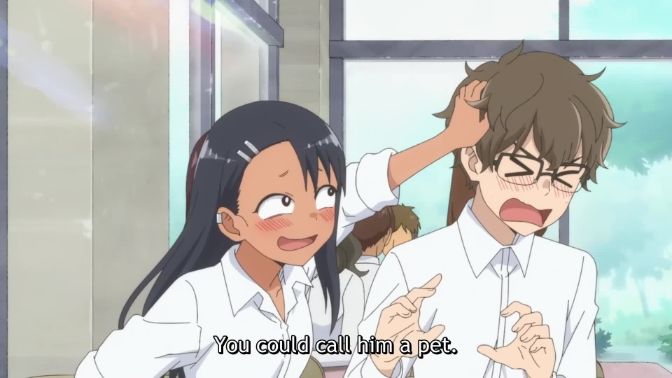 Imagine this for a second.

If the roles were reversed, would people see this as and funny?

The answer is obvious.

This is what I mean when I say Nagatoro is exposing double standards the same way Redo Of Healer did it.

It’s just in a different way.

If people were acknowledging it in spite of it (like I have), that would be different. But that’s not the case, which is why I’m mentioning it.

If the shoe was on the other foot and Naoto, the male MC, did all the things Nagatoro did… To Nagatoro (like push her into a river and laugh it off) I can only picture the outrage.

Especially if Naoto grabbed Nagatoro’s naughty bits, laughed it off, and bullied or teased her, while it’s all played off as comedic and .

Not to mention if he made her cry (in a negative context) and that was part of the comedy. 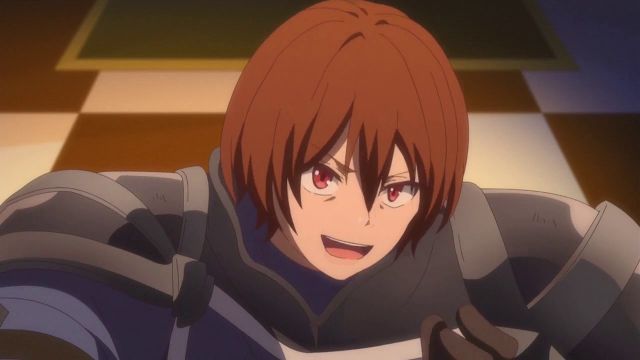 It’s another version of how people focused on Keyaru in Redo Of Healer, and the bad deeds he did out of revenge.

But almost everyone ignored the fact that he was r*ped by a woman, abused, and tortured beforehand. Almost as if to say “r*pe can only go one way”.

Or only one gender matters when it comes to equivalence.

It exposes the double standards WE have in society.

Art imitates life and reflects some of our biases.

Nagatoro is still ongoing, with about 5 episodes so far, so a ton is gonna change as it makes progress.

The already shows this. It’s a matter of having the catch up to the content.

That said, just because there are aspects I like about the , does NOT mean I cant criticize or point out things I’ve noticed.

Hence this post about its gender double standards and how fans have reacted to it.

What do you think about it?