Since then he’s been making headlines for his controversial takes on his ideas for the company, the blue check subscription price that celebrities are mad at, and more.

Kentaro Sato, the author of the  magical girl site, a bloody series in its own right, is the latest critic of Elon Musk and his barrage of tweets.

But it’s not for the same reasons as westerners are criticizing Elon Musk. 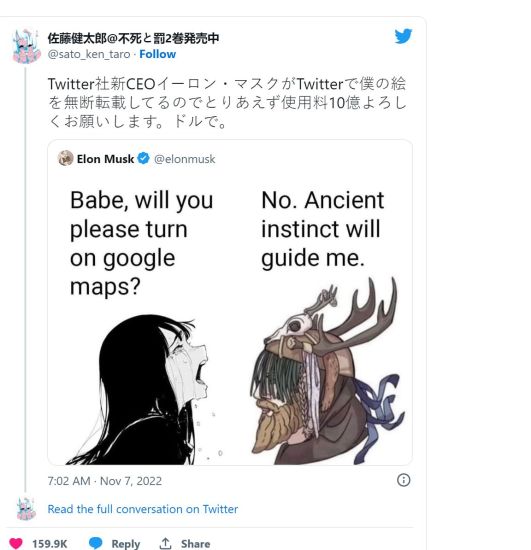 “Twitter’s new CEO Elon Musk has been posting my drawings without permission, so I’d like a usage fee of one billion. In dollars.” – kentaro Sato

In a direct response to Elon’s tweet which is an anime meme using the main character from Magical Girl Site, Kentaro responded via his official Twitter account.

It was of course in Japanese and was translated into the quote you see above.

The main issue is, from his own perspective, posting mages of the copyright Kentaro owns, and doing it without his permission in particular.

It’s the permission part that seems to be a major problem for Kentaro Sato.

In the first follow-up Tweet he shows where the image originally comes from in the . And in the 2nd Tweet, he links directly to the on Amazon (Japanese version).

Some people in the comments are arguing that this is NOT a copyright violation since it’s a meme, it’s within Twitter itself, and all sorts of reasoning.

Not everybody is on board with this thinking though. Many believe this is technically a copyright violation since it’s his work and it’s being used without Kentaro’s permission as the author and owner of the work.

What do you think? Is this a joke or is it genuine?