Kenichi The Mightiest Disciple Quotes in this post, by:

Kenichi The Mightiest Disciple is all about motivating you to be a better version of yourself. And showing you it’s possible to change and improve your life without hurting others in the process.

Each quote in this post highlights this, and other life lessons to be learned from. 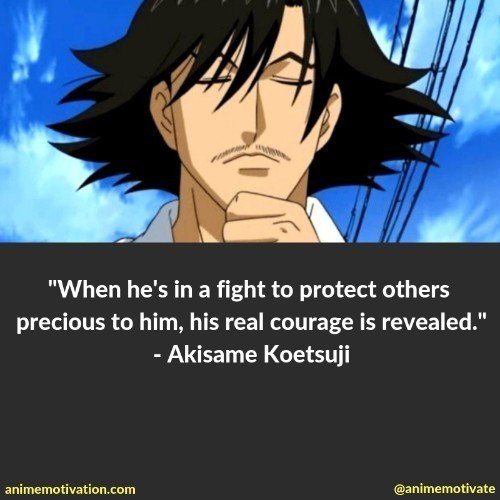 “When he’s in a fight to protect others precious to him, his real courage is revealed.” – Akisame Koetsuji 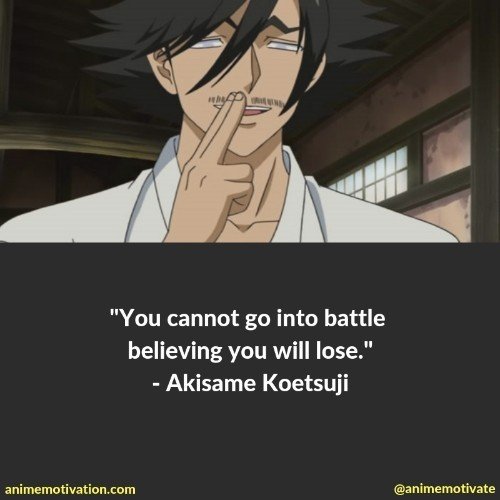 “You cannot go into battle believing you will lose.” – Akisame Koetsuji 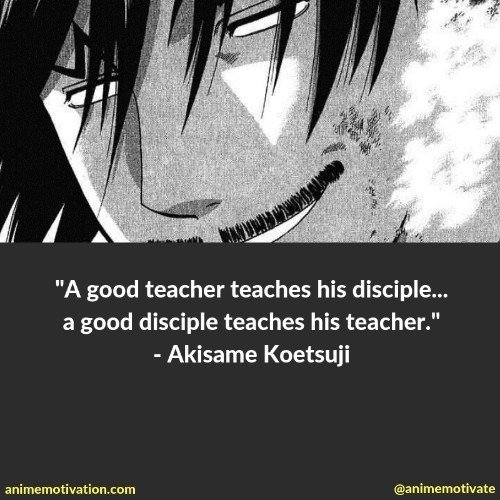 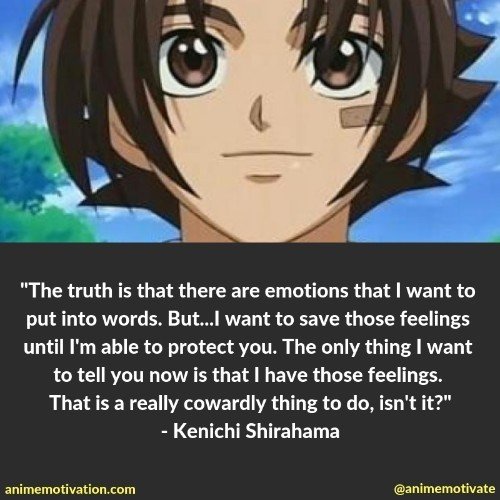 “The truth is that there are emotions that I want to put into words. But…I want to save those feelings until I’m able to protect you. The only thing I want to tell you now is that I have those feelings. That is a really cowardly thing to do, isn’t it?” – Kenichi Shirahama 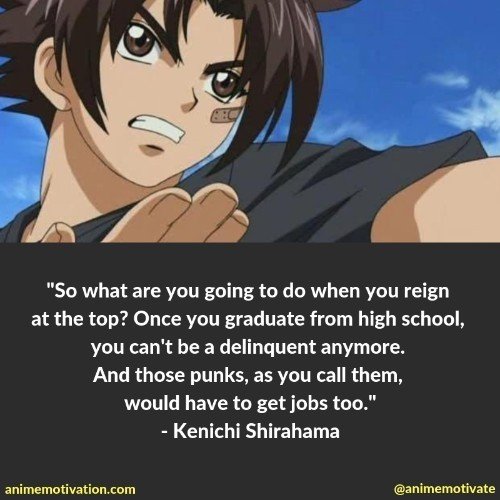 “So what are you going to do when you reign at the top? Once you graduate from high school, you can’t be a delinquent anymore. And those punks, as you call them, would have to get jobs too.” – Kenichi Shirahama 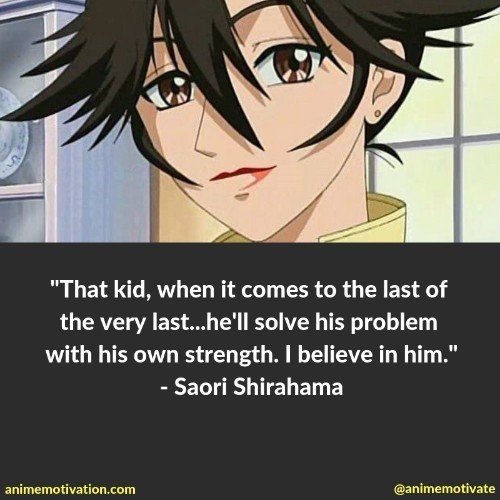 “That kid, when it comes to the last of the very last…he’ll solve his problem with his own strength. I believe in him.” – Saori Shirahama 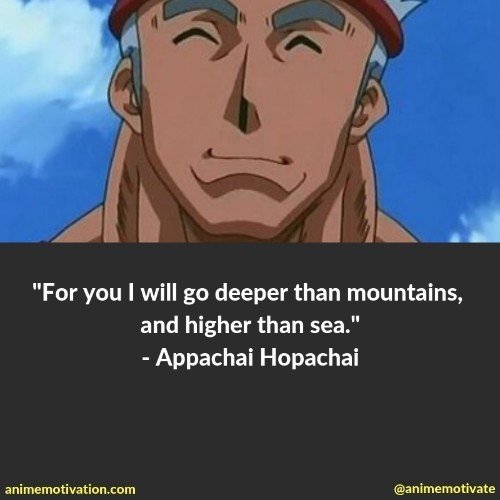 “For you I will go deeper than mountains, and higher than sea.” – Apachai Hopachai 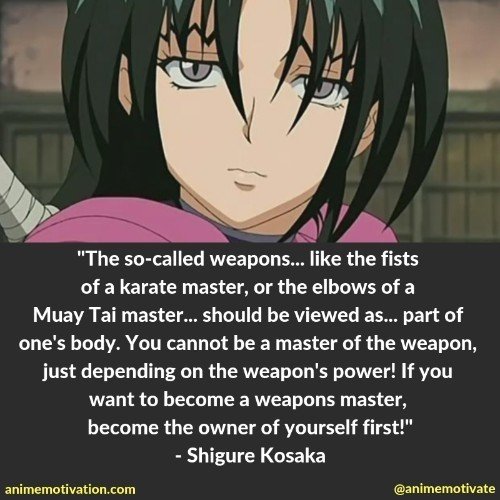 “The so-called weapons… like the fists of a karate master, or the elbows of a Muay Tai master… should be viewed as… part of one’s body. You cannot be a master of the weapon, just depending on the weapon’s power! If you want to become a weapons master, become the owner of yourself first!” – Shigure Kosaka 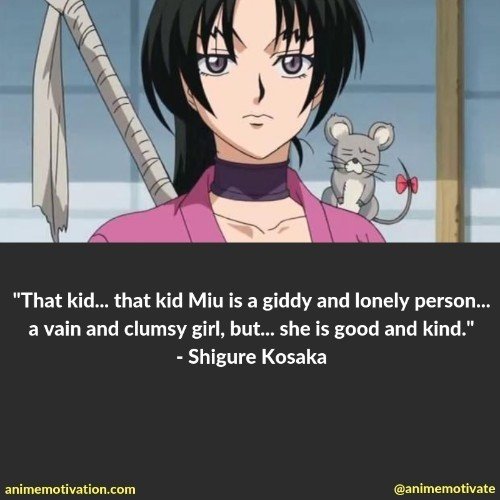 “That kid…that kid Miu is a giddy and lonely person…a vain and clumsy girl, but…she is good and kind.” – Shigure Kosaka 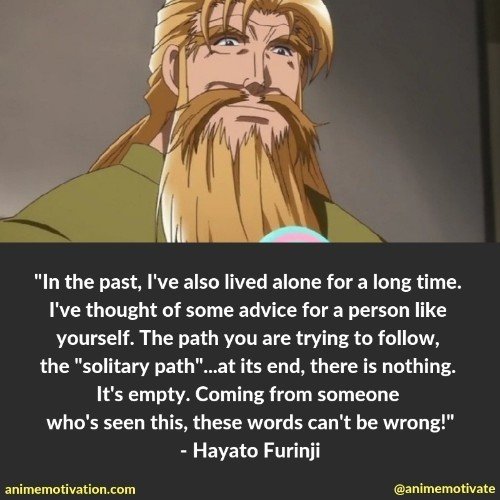 “In the past, I’ve also lived alone for a long time. I’ve thought of some advice for a person like yourself. The path you are trying to follow, the “solitary path”…at its end, there is nothing. It’s empty. Coming from someone who’s seen this, these words can’t be wrong!” – Hayato Furinji 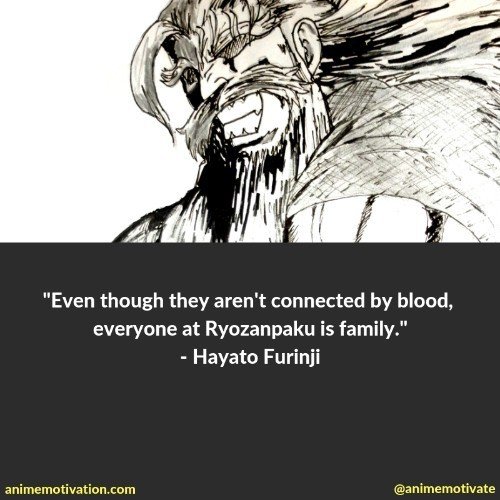 “Even though they aren’t connected by blood, everyone at Ryozanpaku is family.” – Hayato Furinji 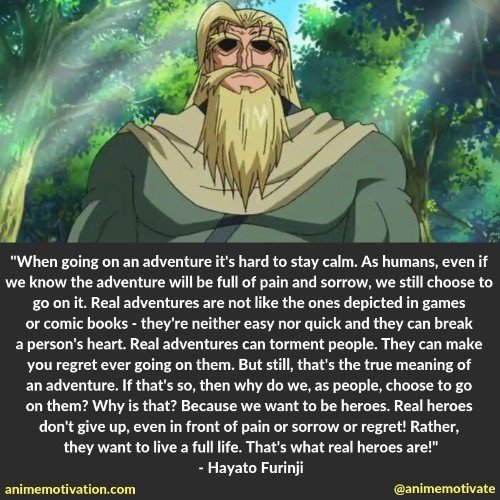 “When going on an adventure it’s hard to stay calm. As humans, even if we know the adventure will be full of pain and sorrow, we still choose to go on it. Real adventures are not like the ones depicted in or comic books – they’re neither easy nor quick and they can break a person’s heart. Real adventures can torment people. They can make you regret ever going on them. But still, that’s the true meaning of an adventure. If that’s so, then why do we, as people, choose to go on them? Why is that? Because we want to be heroes. Real heroes don’t give up, even in front of pain or sorrow or regret! Rather, they want to live a full life. That’s what real heroes are!” – Hayato Furinji 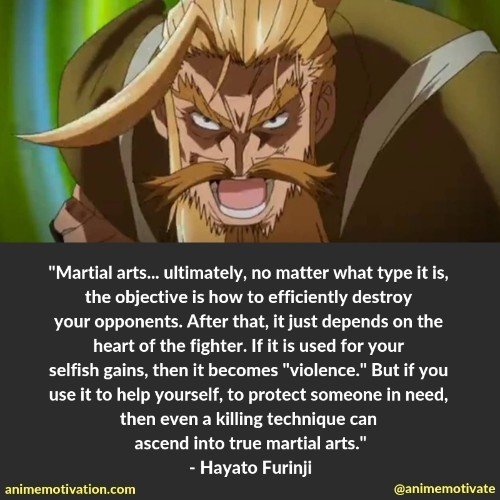 “Martial arts… ultimately, no matter what type it is, the objective is how to efficiently destroy your opponents. After that, it just depends on the heart of the fighter. If it is used for your selfish gains, then it becomes “violence.” But if you use it to help yourself, to protect someone in need, then even a killing technique can ascend into true martial arts.” – Hayato Furinji 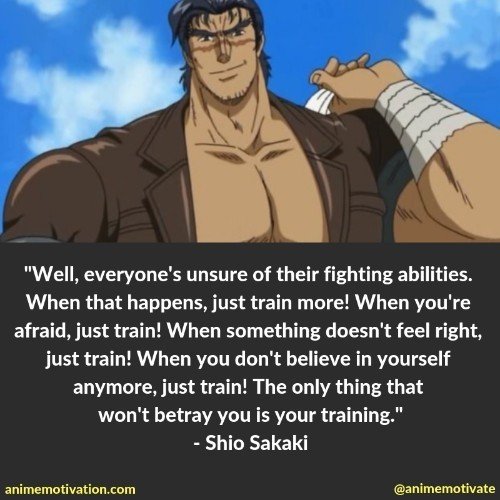 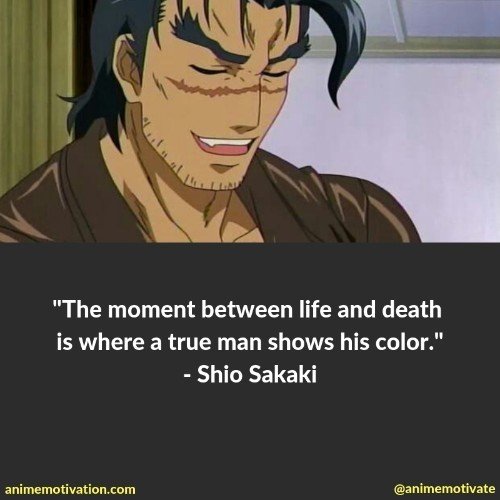 “The moment between life and death is where a true man shows his color.” – Shio Sakaki 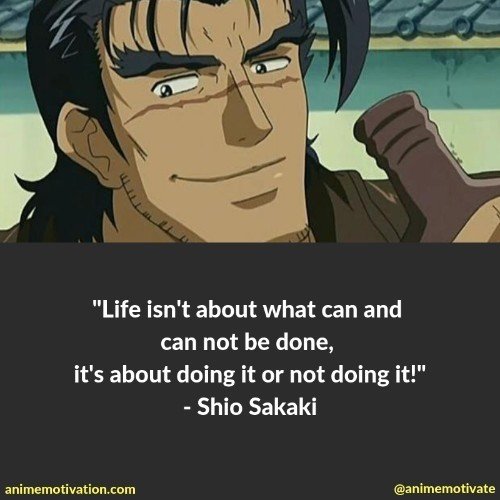 “Life isn’t about what can and can not be done, it’s about doing it or not doing it!” – Shio Sakaki 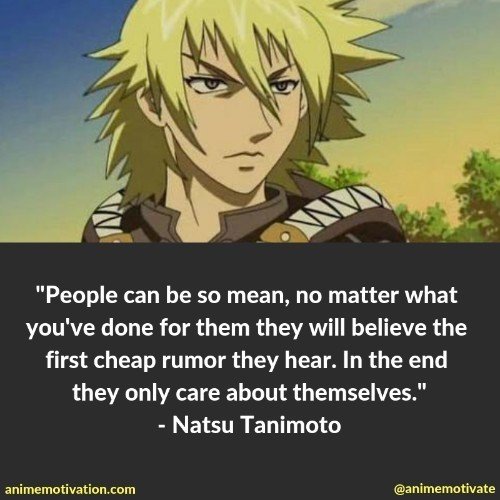 “People can be so mean, no matter what you’ve done for them they will believe the first rumor they hear. In the end they only care about themselves.” – Tanimoto 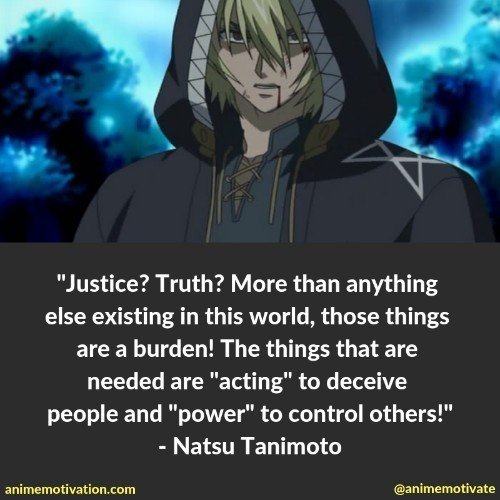 “Justice? Truth? More than anything else existing in this world, those things are a burden! The things that are needed are “acting” to deceive people and “power” to control others!” – Tanimoto 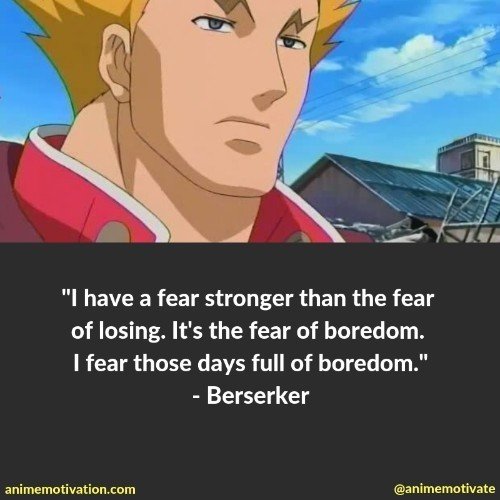 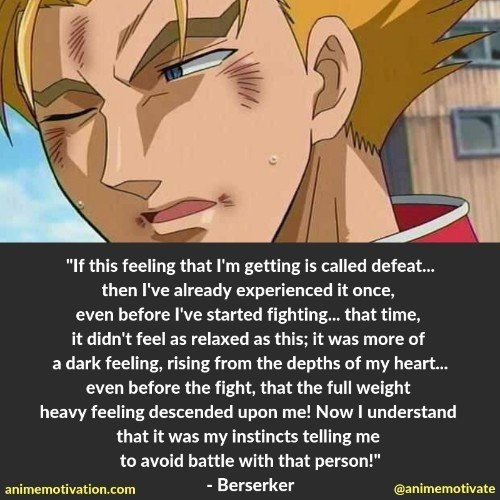 “If this feeling that I’m getting is called defeat…then I’ve already experienced it once, even before I’ve started fighting…that time, it didn’t feel as relaxed as this; it was more of a dark feeling, rising from the depths of my heart…even before the fight, that the full weight heavy feeling descended upon me! Now I understand that it was my instincts telling me to avoid battle with that person!” – Berserker 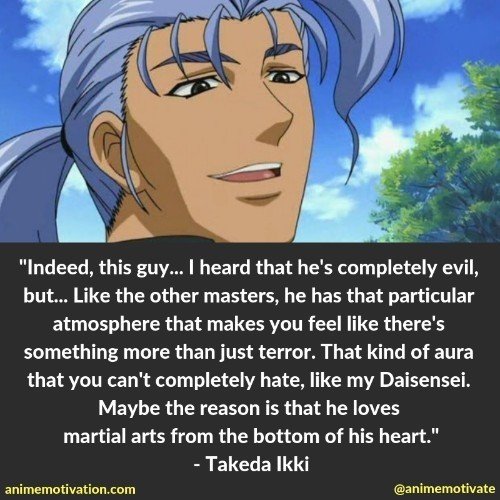 “Indeed, this guy… I heard that he’s completely evil, but… Like the other masters, he has that particular atmosphere that makes you feel like there’s something more than just terror. That kind of aura that you can’t completely hate, like my Daisensei. Maybe the reason is that he loves martial arts from the bottom of his heart.” – Takeda Ikki

14 Quotes From “A Place Further Than The Universe”

Akisame’s definitely the best sensei from this anime. I so love the way he thinks and his preachings as well.

No doubt. He’s one of my favorites from the series as well.