The problem with the argument people have about is – it’s all speculation.

None of it is based on facts.

People believe is a bad influence simply because that’s their opinion of it.

There’s no shred of truth or evidence to back it up. 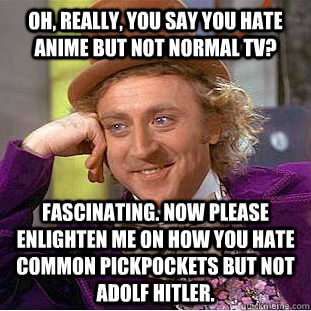 Video are also criticized the same way is.

Someone has a bad experience with either, then they’ll claim it has a negative influence.

And the joke is – because the person with the negative opinion is so emotional about it, others believe their empty claims. Without even questioning whether it’s actually true or not.

Is really a bad influence?

Only if you believe or have fallen for these 4 lies that people tell. Who by the way – are people who have never watched (or have watched too little)  to have a good enough opinion about it.

I know I know. Daft, right?

The original character designer of Girls Und Panzer had a 3 hour interview with Stacey Dooley. A British journalist.

The gist of the conversation was that promotes pedophilia. And shows like Girls Und Panzer are not only examples of it, but it should be banned.

An fan who commented on the article said it perfectly:

“The difference is perceived pedophilia and actual pedophilia. A drawing is just a drawing, don’t pretend that it’s anything but that. Actual pedophilia is a horrible thing and deserves awful punishment. And saying that contributes to it is the same as saying that someone who uses a medium is incapable of controlling themselves. Which is stupid.”

There are many more great (and logical) comments along those lines too. If you check it out.

Being from England myself, I was flabbergasted by the way the journalist handled it.

I was even more disappointed how people in that kind of position can say something false, and have others brainwashed by it.

It’s opinions like this (based on no factual evidence) that ruin it for the majority.

The same people who may actually be interested in , but now have a negative perspective of what is.

The truth is – a pedophile doesn’t need (or anything at all) to influence pedophilia in the first place.

The outlet (if we want to use that as an excuse) is just a trigger that reveals who a person is on the inside.

2.  has a bad influence on kids/teenagers

If you ask me – this is an excuse people make to ignore the real problems in our society.

If teenagers are misbehaving in school, and you’re a teacher, and you blame as the cause…. You’re using it as an excuse to avoid figuring out what the ACTUAL problem is with the kid/teenager.

I’ve been watching since I was a kid. happened to be the first show I laid eyes on.

So was I lucky? Did I by some stroke of luck or magic manage to NOT be badly influenced by ?

Come on now. You know better than that. 😉

If someone misbehaves, it’s because of a deeper reason that can’t be seen on the surface.

It’s our job as teachers, parents, authority figures and people to be a leading example.

More importantly – it’s our job to communicate with each other to get to the root of the problem.

We then make assumptions about “why” kids/teenagers are acting a certain way, when in reality we haven’t bothered to ask or talk to them to find out the real reason…

Which would SOLVE everything.

I get it. I can even understand why people would believe this. And why people claim this is the reason why is a bad influence.

But let me blow your mind for a second. And lay down some solid facts for you.

Do you see where I’m going with this?

An overwhelming majority of the population is exposed to this (not ), and some even do it willingly. BEFORE the age of 12 in some cases.

If there are more visitors to explicit sites per month than there are to , Netflix and Twitter combined, than surely this is the thing that influences sexual tendencies.

, Netflix and Twitter are massive sites after all. With multi-millions of visitors (which still doesn’t compare to the enormous audience 18+ sites have).

in comparison to the crazy statistics you can see above. And that’s a fact.

There’s no way near that many viewers of lets say – (the equivalent) or just in general.

Now, if we were to ignore those facts, we can state another fact instead. Which is – if a teenager is sexually active, then (or anything) can’t further promote their sexual tendencies.

Similar to point #1, it will only reveal what they already are. Nothing can “make” you something that you’re not.

That decision comes down to the individual.

Before you can make claims about something causing addiction, you first should know how an addiction even starts off.

Or what causes it. And why it’s caused.

This is how Medical News USA defines addiction:

“People with an addiction do not have control over what they are doing, taking or using. Their addiction may reach a point at which it is harmful.”

But what causes addiction? Here’s what Medical News USA has to say about it:

“Doctors say there is a link between the repeated use of an addictive substance and how the human brain experiences pleasure – its use has a nice reward, leading to further and more frequent use. The addictive substance, be it nicotine, alcohol or some drug actually causes physical changes in some nerve cells in the brain.”

Notice how addiction is associated with drugs, alcohol or a “substance”?

Now let’s get back to the point: Does cause addiction?

Based on the scientific facts, the answer is no.

Sure you can become addicted to to the point of obsession. And even have it interfere and ruin other parts of your life (in extreme cases).

But the REAL cause in a situation like this isn’t itself. No, the root cause is much deeper than that.

So deep that most people who blame as the cause overlook the real problem.

People get addicted to TV, , video (and whatever else) because:

So the point is: Instead of blaming for causing addiction, it’s better to look at the real issues as to why someone gets “addicted” in the first place.

And on that note: Most fans aren’t addicts.

As with most things, it’s the minority of people, not the majority.

It’s just that the minority of people who are addicted, get blown out of proportion. Making it seem as if most people are like that when they’re not.

is not a bad influence at all.

If that were true, then how are films, video , reality TV shows or beauty magazines any more noble than is?

Entertainment is something we watch for fun, or to learn and pass the time. And nothing more than that.

10 Reasons Why Anime Has Educational Value

Lets be honest here. Anime has helped me out so many times in my life.

I love your site man. Keep it up!

The first anime i watched was Dragon Ball Z. It is actually very motivational.