Ichika Amasawa is one of the key characters in the Classroom Of The Elite franchise. And one who makes her first debut in the as opposed to the 2nd season of the anime.

She has yellow scarlet eyes. A unique color given the 100s of female characters who lack these traits, and this pairs well with her hair color as well.

Having the personality of someone who loves to tease, can be sarcastic, and playful, she can be a person difficult to figure out at times.

Observant and more tuned in than her personality suggests, she’s easily one of the smarter, more dangerous characters in a sense in the series.

Her quotes reflect some of these traits, as well as her relationship with Kiyotaka, the MC, and other aspects of the franchise. 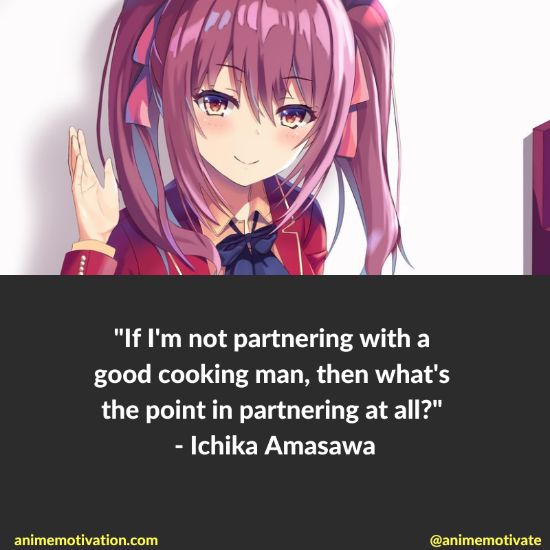 “If I’m not partnering with a good cooking man, then what’s the point in partnering at all?” – Ichika Amasawa 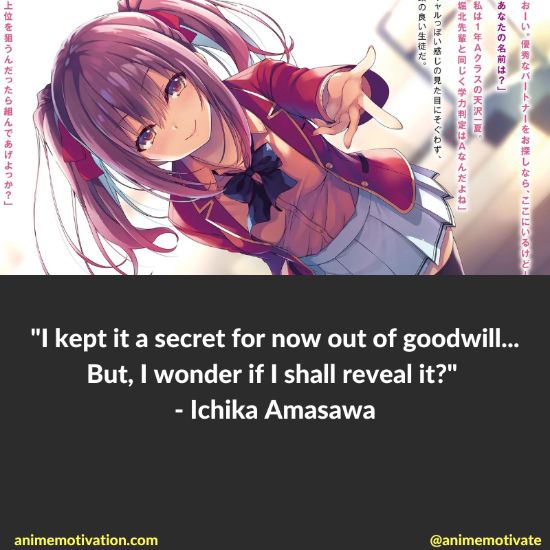 “I kept it a secret for now out of goodwill…But, I wonder if I shall reveal it?” – Ichika Amasawa 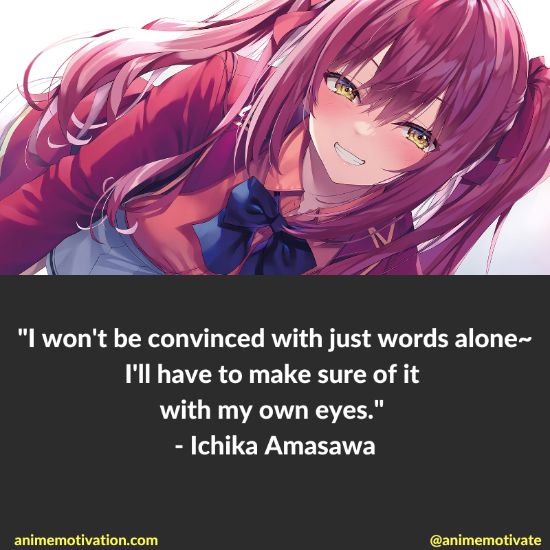 “I won’t be convinced with just words alone~ I’ll have to make sure of it with my own eyes.” – Ichika Amasawa 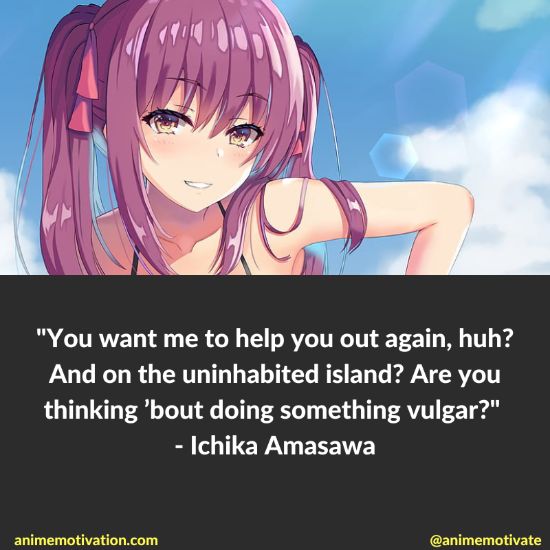 “You want me to help you out again, huh? And on the uninhabited island? Are you thinking ’bout doing something vulgar?” – Ichika Amasawa 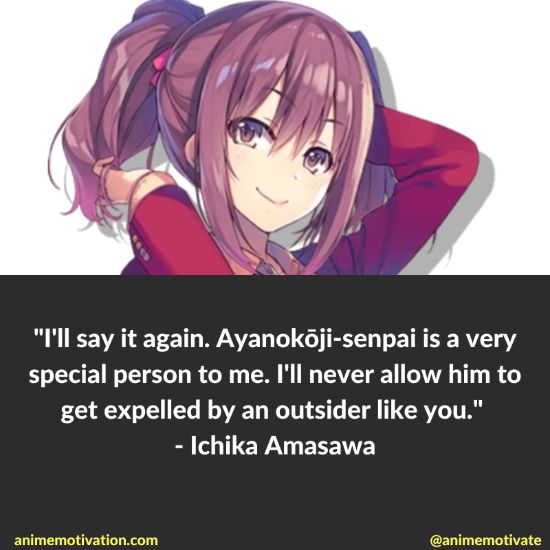 “I’ll say it again. Ayanokōji-senpai is a very special person to me. I’ll never allow him to get expelled by an outsider like you.” – Ichika Amasawa 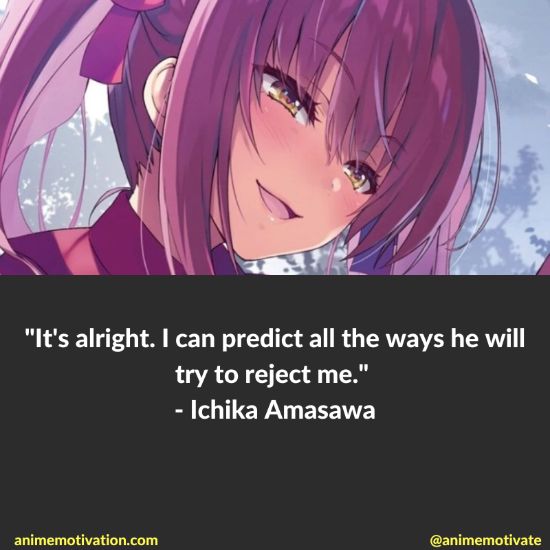 “It’s alright. I can predict all the ways he will try to reject me.” – Ichika Amasawa 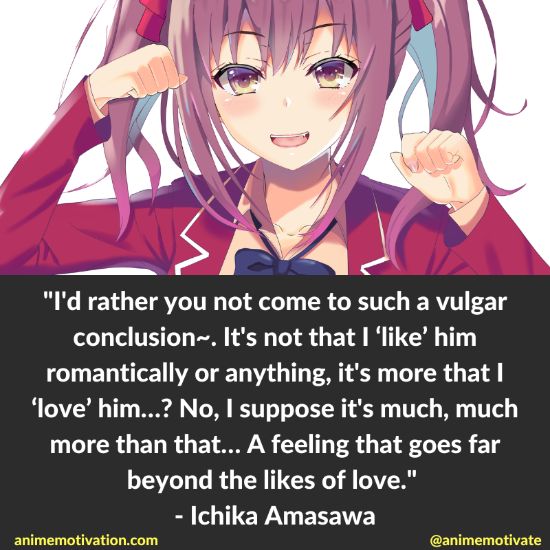 “I’d rather you not come to such a vulgar conclusion~. It’s not that I ‘like’ him romantically or anything, it’s more that I ‘love’ him…? No, I suppose it’s much, much more than that… A feeling that goes far beyond the likes of love.” – Ichika Amasawa 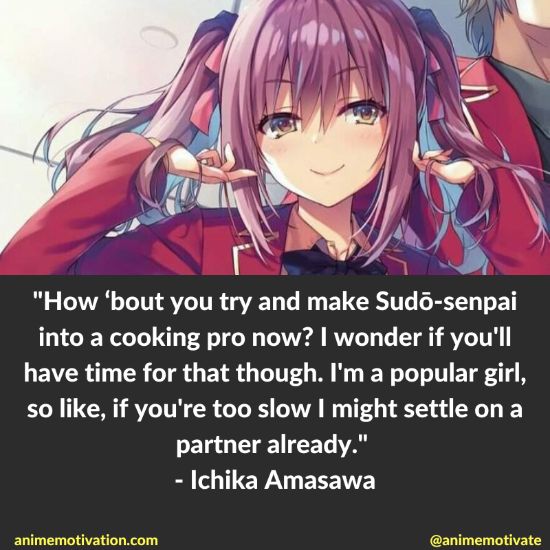 “How ‘bout you try and make Sudō-senpai into a cooking pro now? I wonder if you’ll have time for that though. I’m a popular girl, so like, if you’re too slow I might settle on a partner already.” – Ichika Amasawa 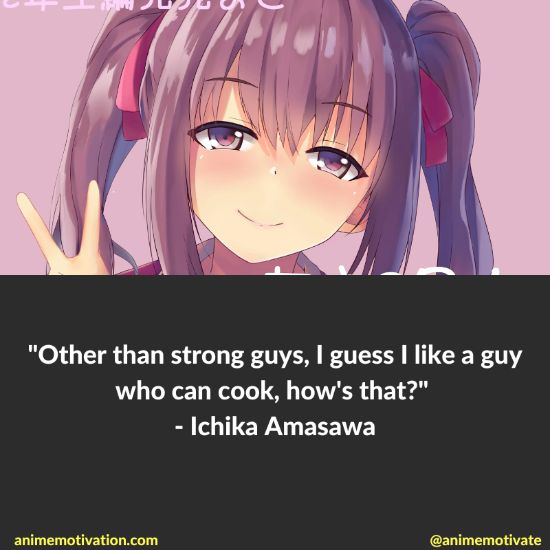 “Other than strong guys, I guess I like a guy who can cook, how’s that?” – Ichika Amasawa 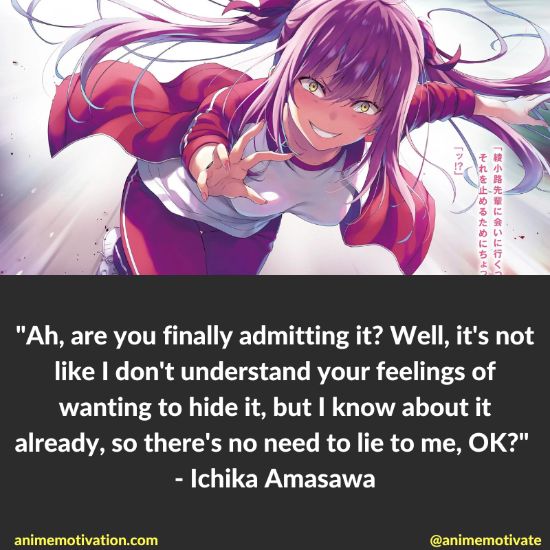 “Ah, are you finally admitting it? Well, it’s not like I don’t understand your feelings of wanting to hide it, but I know about it already, so there’s no need to lie to me, OK?” – Ichika Amasawa The 12+ Greatest Ichika Amasawa Quotes (Classroom Of The Elite)