Highschool Of The Dead Quotes taken from characters:

Highschool Of The Dead is a horror series with elements, produced by Madhouse.

Despite all the heavy fan service of this , there are actually quotes worth sharing that hold some value.

Others touch on specific moments.

Here are all the best lines from HSODD. 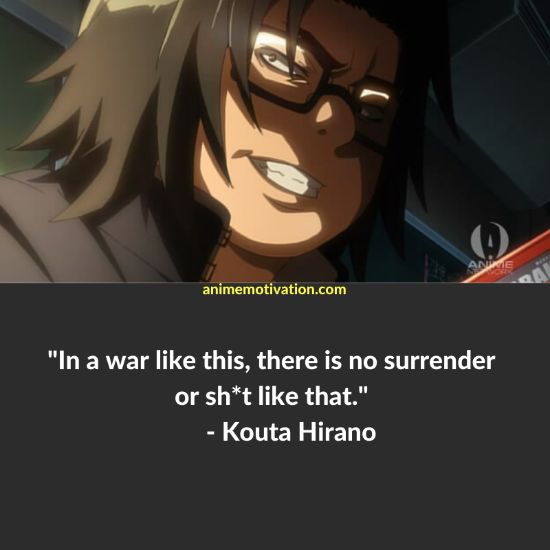 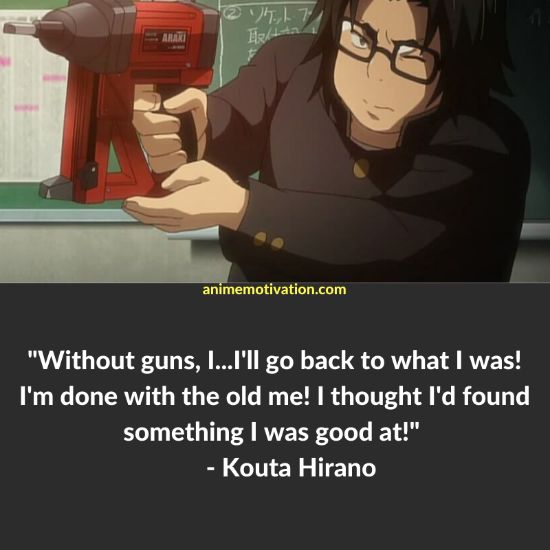 “Without guns, I…I’ll go back to what I was! I’m done with the old me! I thought I’d found something I was good at!” – Kouta Hirano 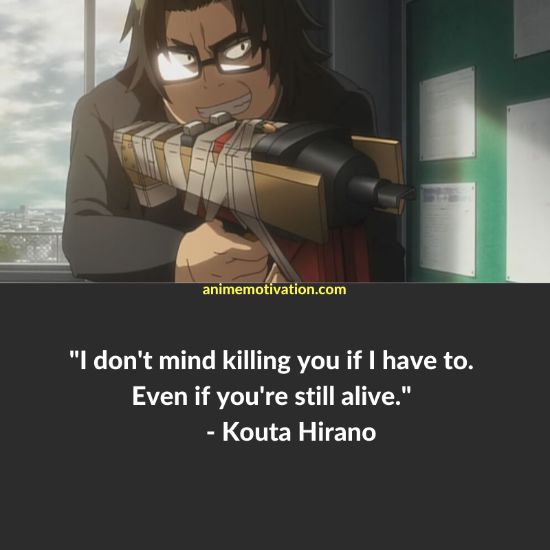 “I don’t mind killing you if I have to. Even if you’re still alive.” – Kouta Hirano 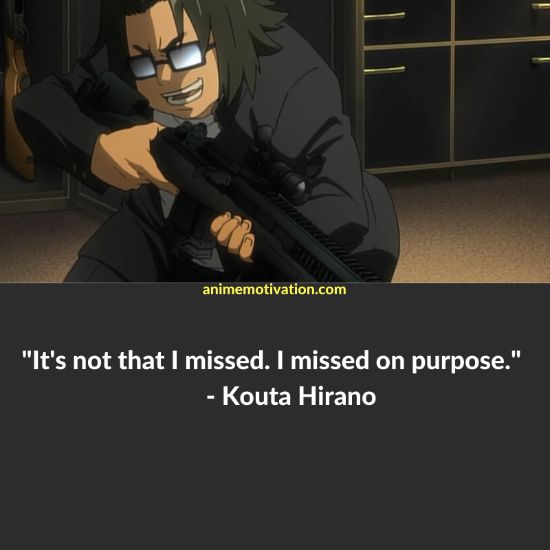 “It’s not that I missed. I missed on purpose.” – Kouta Hirano 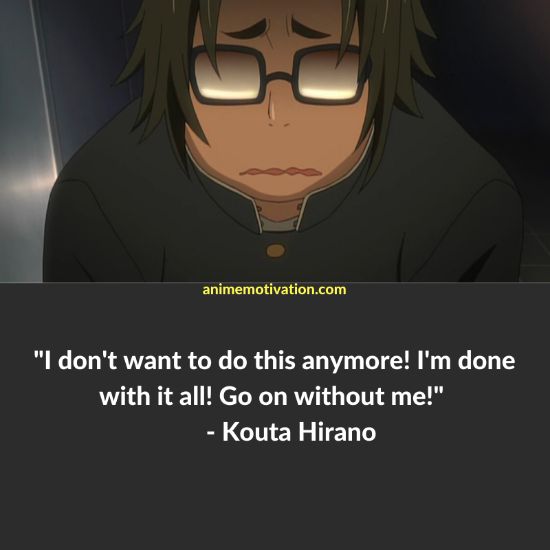 “I don’t want to do this anymore! I’m done with it all! Go on without me!” – Kouta Hirano 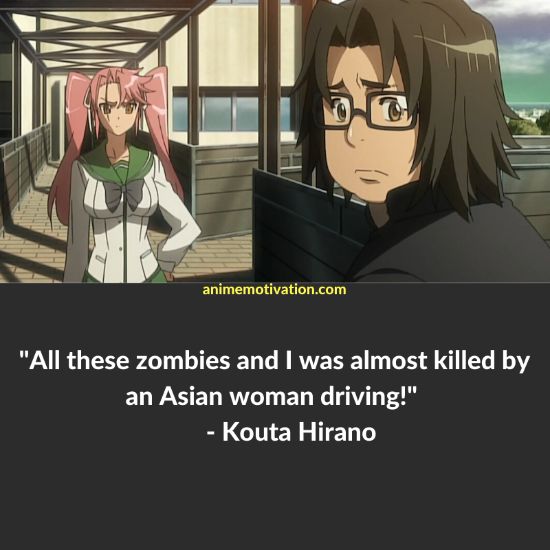 “All these zombies and I was almost killed by an Asian woman driving!” – Kouta Hirano 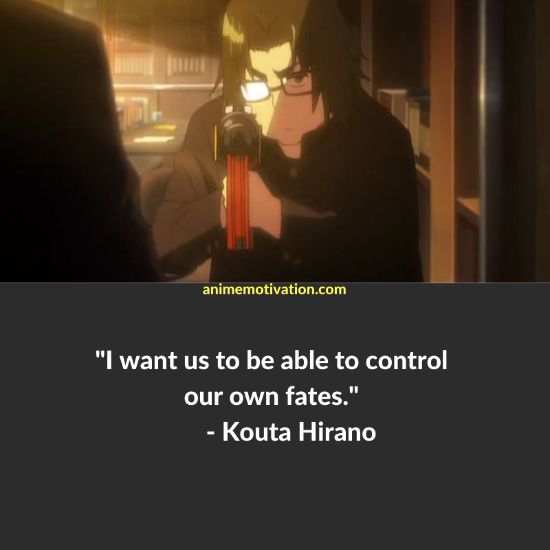 “I want us to be able to control our own fates.” – Kouta Hirano 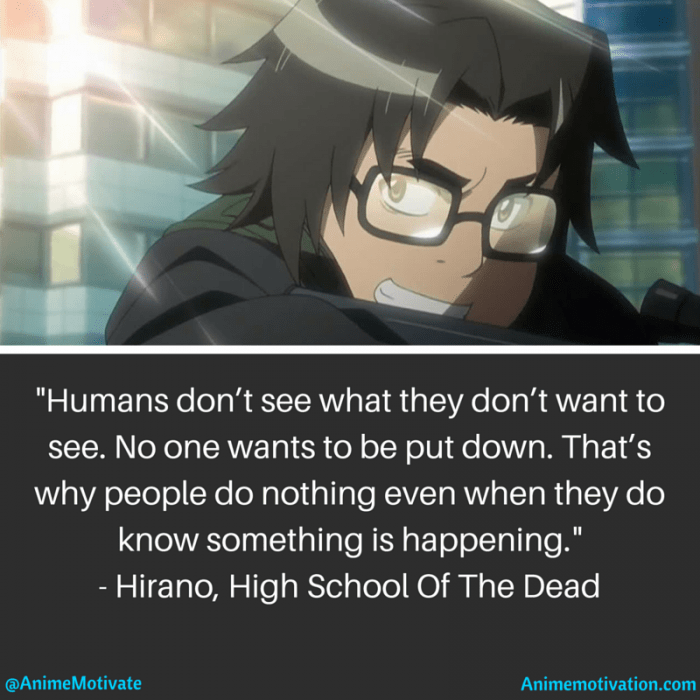 “Humans don’t see what they don’t want to see. No one wants to be put down. That’s why people do nothing even when they do know something is happening.” – Kouta Hirano 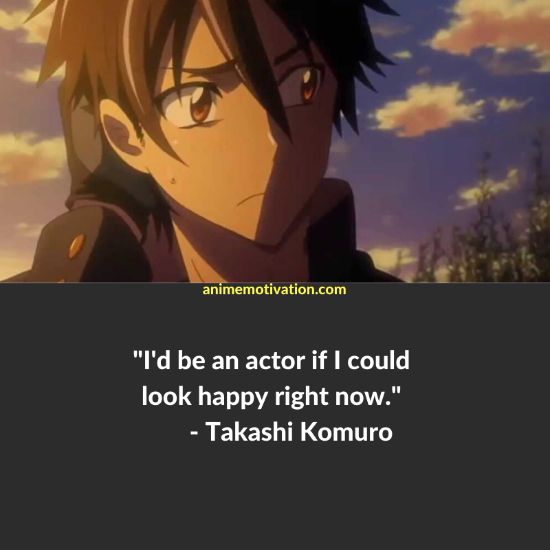 “I’d be an actor if I could look happy right now.” – Takashi Komuro 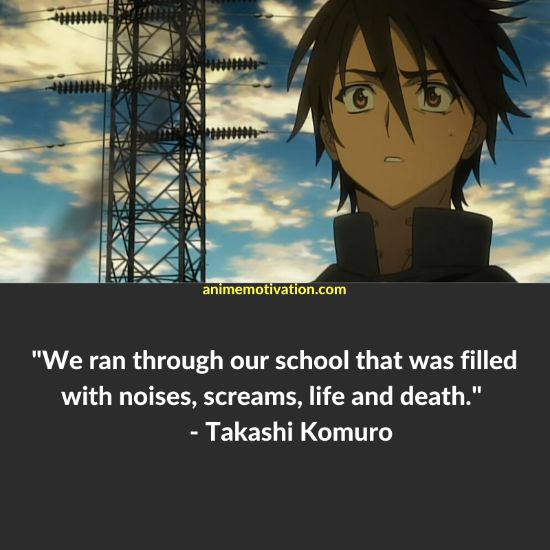 “We ran through our school that was filled with noises, screams, life and death.” – Takashi Komuro 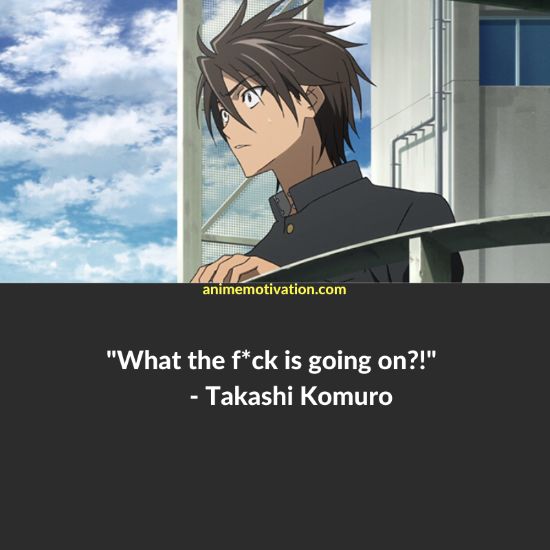 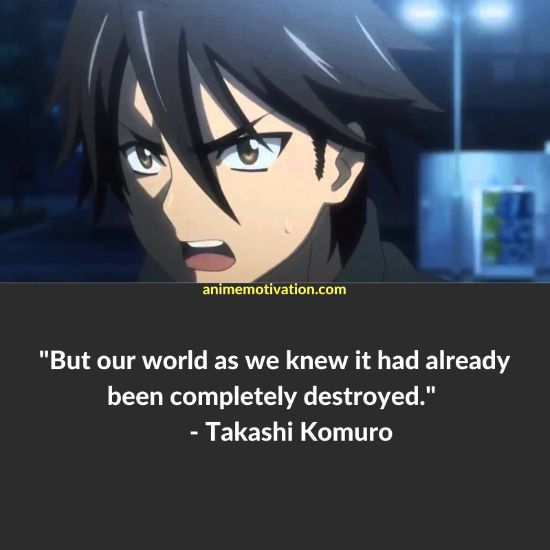 “But our world as we knew it had already been completely destroyed.” – Takashi Komuro 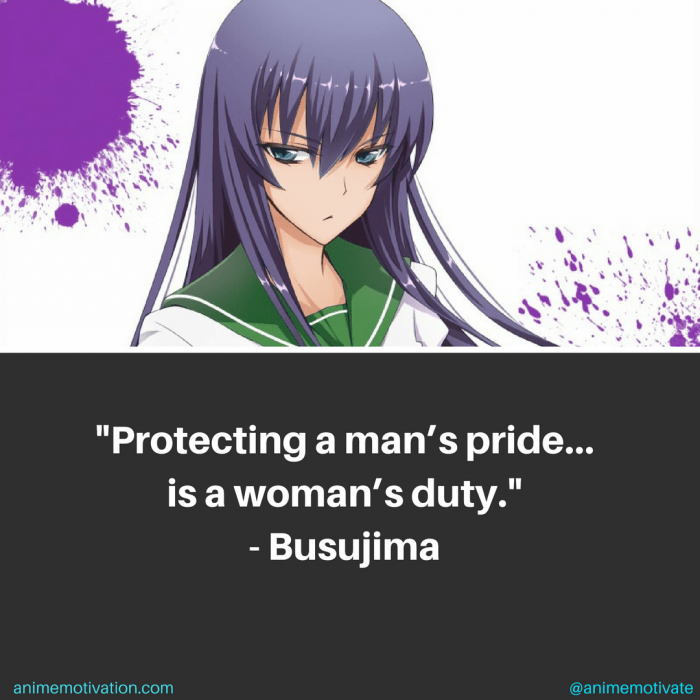 “Protecting a man’s pride… is a woman’s duty.” – Saeko Busujima 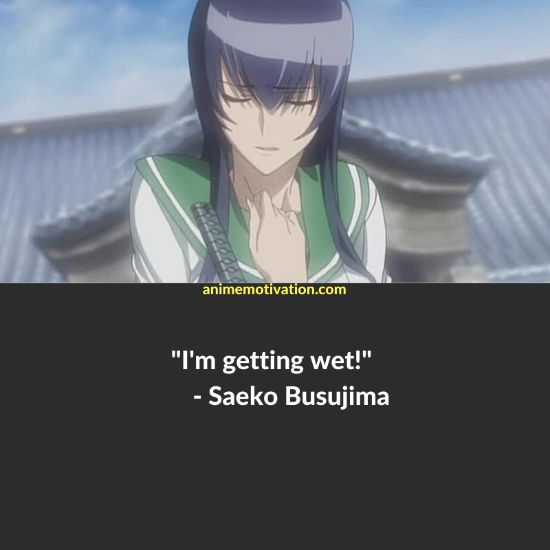 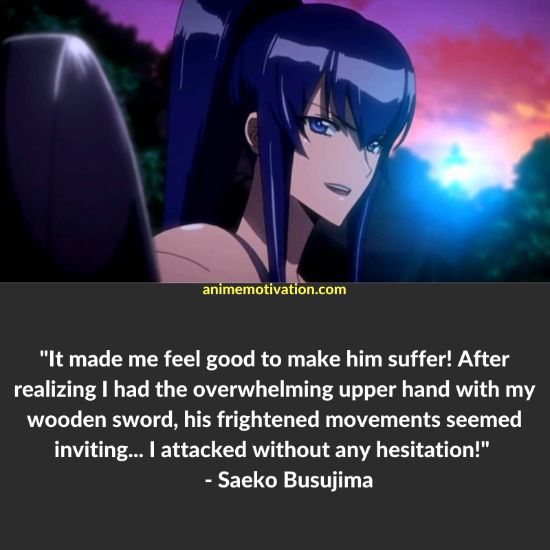 “It made me feel good to make him suffer! After realizing I had the overwhelming upper hand with my wooden sword, his frightened movements seemed inviting… I attacked without any hesitation!” – Saeko Busujima 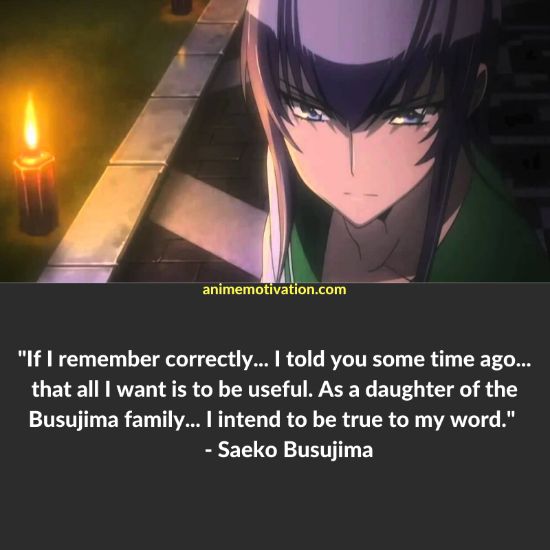 “If I remember correctly… I told you some time ago… that all I want is to be useful. As a daughter of the Busujima family… I intend to be true to my word.” – Saeko Busujima 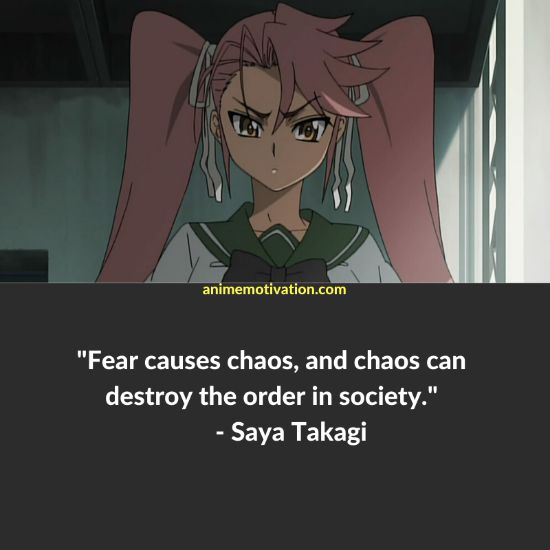 “Fear causes chaos, and chaos can destroy the order in society.” – Saya Takagi 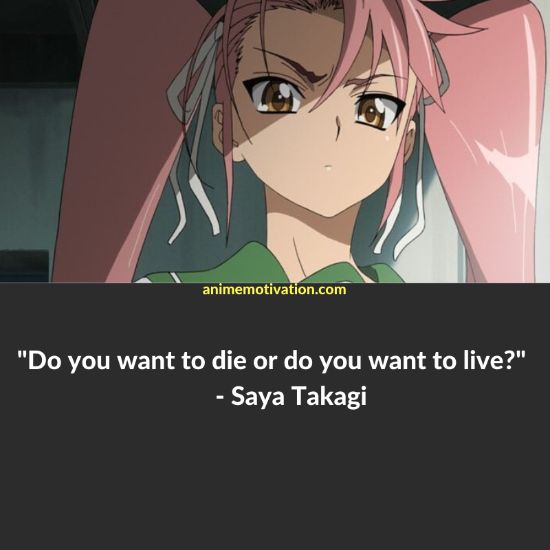 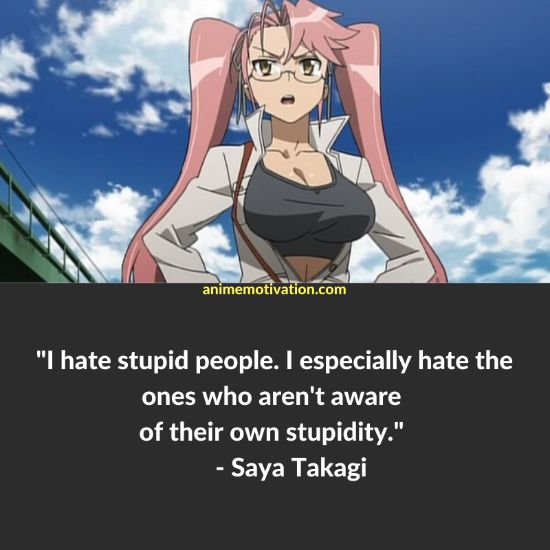 “I hate stupid people. I especially hate the ones who aren’t aware of their own stupidity.” – Saya Takagi

“How could I just die!? What kind of person would let themselves die!?” – Saya Takagi 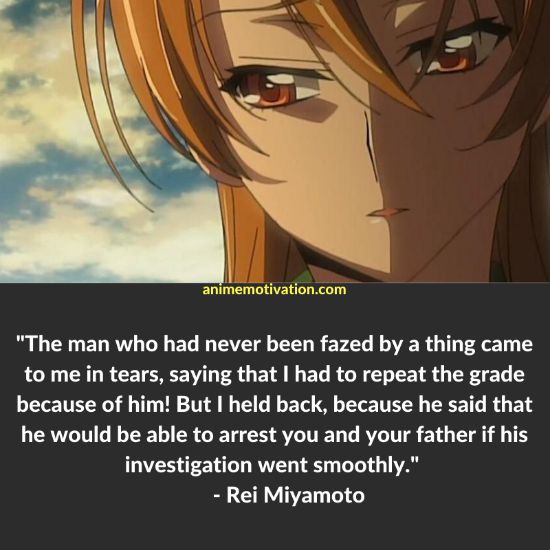 “The man who had never been fazed by a thing came to me in tears, saying that I had to repeat the grade because of him! But I held back, because he said that he would be able to arrest you and your father if his investigation went smoothly.” – Rei Miyamoto 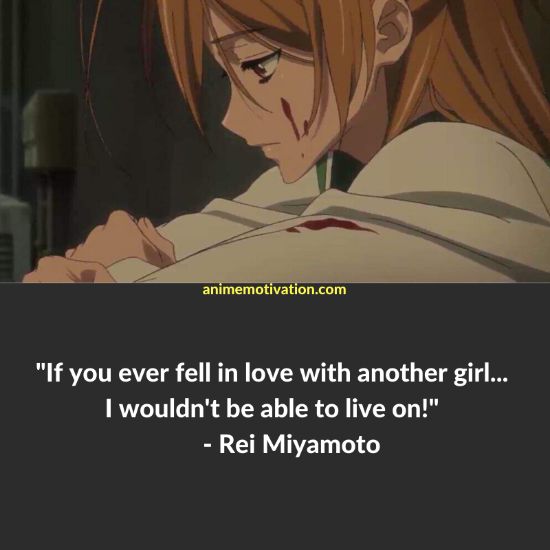 “If you ever fell in love with another girl… I wouldn’t be able to live on!” – Rei Miyamoto

“I hope I never get used to killing like this.” – Rei Miyamoto

These 47+ Pandora Hearts Quotes Have Stood The Test Of Time

26+ Of The Greatest Medaka Box Quotes Of ALL Time!