Originally published by Naomi via Medium.

Some might still see Anime as something just for “kids”; they are seriously missing out on many lessons one can learn from them for one’s life and business.

Gurren Lagann, known in Japan as Tengen Toppa, is a Japanese anime tv series that aired for the first time in 2007. It follows two teenagers, Simon and Kamina, from an underground village who dream of living above ground.

Once they reach the surface, they face enemies wanting to crush humanity. They persevere and continue their battle to be able to choose how they want to live.

The anime was a huge motivation for our founder, and we have learned important lessons from it. And not just him; if you check out comment sections about the anime on Reddit, and other forums, you’ll find plenty of people who were inspired by it.

Just don’t expect logic as a core proposition of it.

So here are six lessons businesses and managers can learn from it.

1. It’s okay to be vulnerable and have a hard time

Throughout Gurren Lagann, there are various losses that protagonists experience.

Simon has a tough time dealing with loss, losing his appetite and motivation over it. He lost the person who has always believed in him and isn’t entirely confident in himself yet.

The others around him first give him space, eventually kicking him out of his lethargy. Despite his vulnerability, Simon moves on to become the leader of Team Dai Gurren. Or maybe it’s because of it.

Vulnerability helps build cultures of trust. As Daniel Coyle found in his book the culture code after examining various successful cultures: “Vulnerability doesn’t come after trust, it precedes it.”

This is directly tied to the next lesson.

Throughout Simon’s crew, members of Simon’s team know that they always have each other’s back. Even when it requires making hard, illogical decisions.

For business leaders, this means establishing that failure is not frowned upon and ensuring employees feel comfortable enough in their environment to voice their opinions. When everyone fears for their job, you won’t get far.

Look up the history of leaders who surrounded themselves with yes-men. Nothing good came from it.

For startups, in particular, leaping into the unknown together can cause the trust to materialize and create the safety and confidence required for everyone to thrive.

3. Establish a common purpose and let it evolve 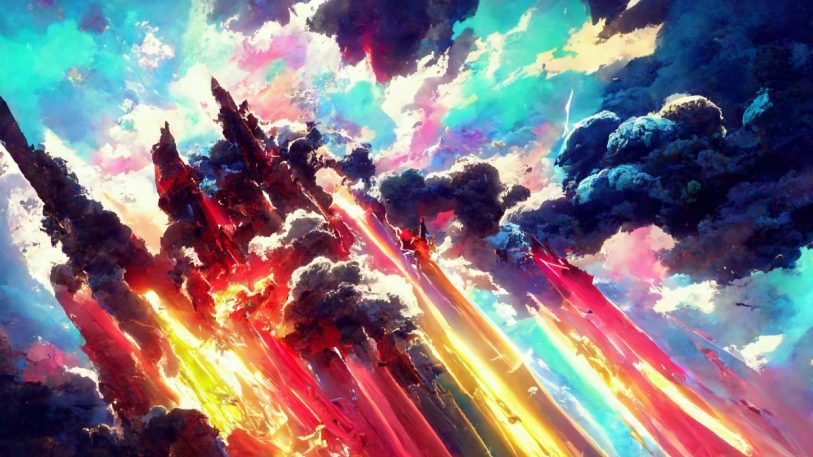 Gurren Lagann starts with Kamina’s desire to go above ground and see the sky. Throughout the series, the purpose evolves to fit the circumstances. Ultimately, the goal is to reach a state where they can choose how they want to live, a wish that has driven countless revolutions before Freedom.

Having a shared purpose creates an environment in which everyone will work towards the same goal, even without explicit instructions to do a task. It enables everyone to do their part proactively and empowers decision-making on an individual level — without jeopardizing the greater mission.

High-success business cultures are no different. They revolve around a shared purpose and constantly remind themselves and others of what the “Where we want to be” looks like. As a business evolves, this purpose should evolve with it.

4. The power of marginal gains

“We evolve beyond the person that we were a minute before. Little by little, we advance with each turn. That’s how a drill works.” — Simon.

It’s essential to value marginal gains. Even the upskilling of one employee can make a huge difference, the slight improvement of a system to be just 3% more efficient.

It’s all about continuing to progress. To never stand still. Even if it is just a little progress.

As a business, to continue making progress also means staying on top of industry trends, being open to innovation, and avoiding going down the way of Kodak.

5. Empower others to empower yourself

“The dreams of those who have fallen…The hopes of those who will follow! Those two sets of dreams weave together into a double helix, drilling a path towards tomorrow.” Simon

Evolution and progress aren’t things that happen triggered by a single person. Even though we might just remember a few individuals that stood out through their scientific and other contributions, they often stand on the shoulders of giants.

They couldn’t have managed to get to this pivotal moment without others’ previous contributions.

Compassion is a great motivator enabling leaders to empower others to empower themselves. For managers, this might mean mentoring their subordinates to take on more responsibility and, in turn, to see the fruits of their labor reflected in their results.

This will further empower you to continue evolving.

There is a lot of strength to be gained from passing on what you know without thinking about others as direct competitors. Ultimately, you’re all in the business to reach the same goal. (see Point 2 )

Related: 38 Of The Most Inspirational Quotes From Gurren Lagann

6. Sometimes you have to reject common sense.

Plenty of companies just continued in their lane and didn’t see it coming that blockbusters could go out of business once or that people would want to stay at strangers’ homes (common sense?!)

“Kick logic and do the impossible! That’s how team Dai Gurren rolls!”

Especially as an entrepreneur, don’t let it discourage you when you are convinced you’re on the right track.

Sometimes it’s just that you’re still early, and people cannot conceive that we will drive autonomous cars and wear AR one day. That doesn’t mean you’re wrong. And with the proper conviction and team, you might just make the impossible possible.

After all, people living before the printing press was invented probably never dreamt of having access to information about things beyond their local region.

Let alone had any idea that one day we’d have the knowledge of our world in our pocket, at all-time handy.

Equipped with these lessons, go ahead, and build your own future.

Or, as Simon put it:

Art credits: all images in this post are created using midjourney and are originals.

27+ Inspiring Anime Characters You Can Learn Something From