At the World’s MOST DIVERSE SHONEN COMICS anthology, not only does Saturday AM want to show that they are inspired by popular Japanese like Dragon Ball and , but that they prioritize a diverse brand of creators, stories, and characters.

Their heroes range from Asian to Arabic, African-American to Latino, Caucasian to Native America and are of every gender, orientation, and background.

In honor of this past Black History Month, Saturday AM wanted to do a special showcase regarding their protagonists of African descent that are leading the way in their respective smash hit series.

With the lack of positive portrayals of black characters in the / industry, these creators are some of the best of the best in representing Saturday AM’s mission statement for greater diversity.

Question: Is the star of your series a black character or a supporting character? 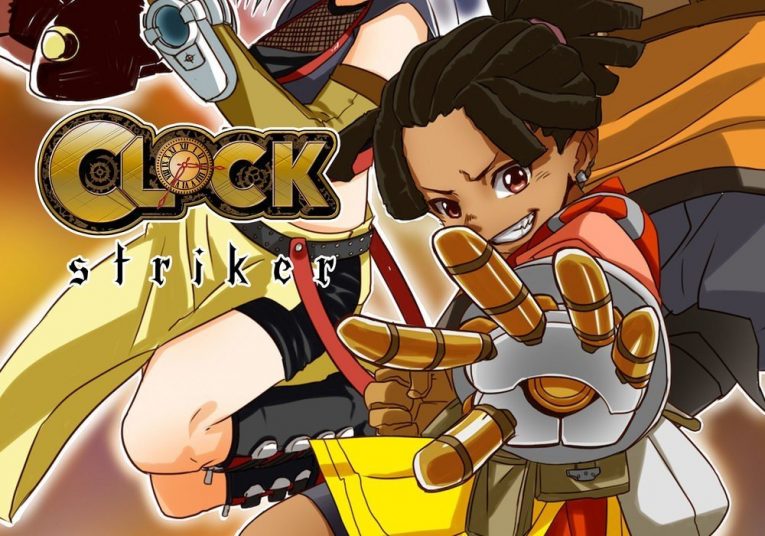 Cast is the heroine of CLOCK STRIKER and is a 13-yr old Black pre-teen who is determined to become a SMITH (as in Blacksmith) despite women or POC usually being in these roles.

While she is the striker (aka apprentice) to the rare & legendary female SMITH, Ms. Philomena Clock, Cast IS the star.

It comes across a bit like BATMAN and ROBIN if the stories were from Robin’s perspective. 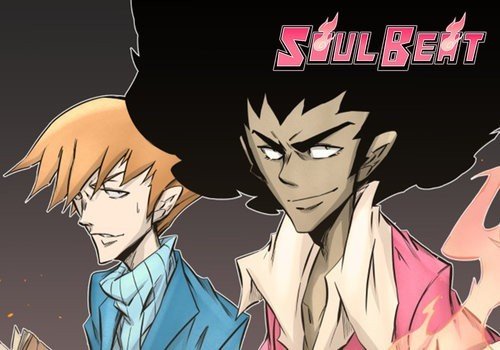 Dante Alfonse is an African-American man in his early thirties. He’s definitely the star of the show, ha ha. 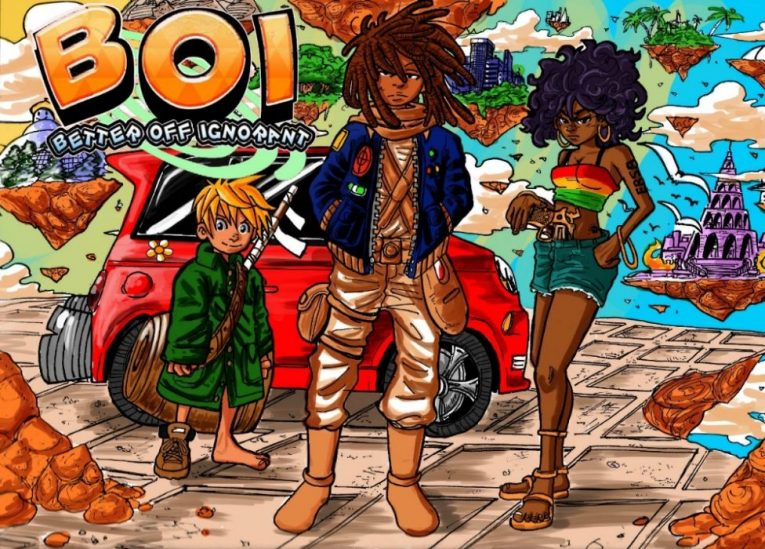 Isa is biracial by real world standards, but in Babylon there are no categorial races. Just varying pigments. He was born to a dark skinned mother and a fair skinned father.

Christine is French-American with a French mother and African-American father.

Question: What makes them unique as characters?

Cast has many things going against her — she’s disabled (she was born with no left hand) and she is a young woman of color who wants to do something that is traditionally handled by White men.

Watching her rise above unfair and (oftentimes dangerous) obstacles while still maintaining her dignity is something that I’ve not seen with a prominent black female in comics and am eager to share her story to the World.

Despite living in the year 2015, Dante prefers to wear and his hair styled as if he were in the 1970s. To some, it’s just a weird quirk of his, but to him it’s a statement about his own past and has become a part of his identity. In spite of what other people thinks he should be, he wants to be himself.

Isa is meant to be the savior of an entire continent, however he is unmotivated and spends his time as a vagrant.  I think this makes him a very unconventional protagonist. He’s like…a lazy messiah.

Aboki has experienced being treated differently due to his facial skin pigmentation. He depicts himself to be kind and approachable towards others, despite knowing how different he is.

Christine’s uniqueness is her “non-uniqueness.”  So far as I tried to make her a normal thirteen year old girl as I could.

Question: Who or What influenced their creation?

I’ve been blessed to have many female role models in my life to former bosses & co-workers, dear college friends, and family members (chiefly my Mother and Sister).

With Cast, I wanted her to follow that classic tradition of “strong Black woman” that exists in nearly every Black family around the world.

Despite Slavery, apartheid, Jim Crow, and many other disgusting affronts against Black people, our women have LONG BEEN extraordinary forces for consistency and HOPE in our community.

Storm from X-men is a Goddess and has unnatural flowing white hair — I wanted to share the heroic journeys of a true blue collar, Black female character who has more grounded struggles and dreams.

Initially the story was just a parody of Dante’s Inferno and the 70’s classic Disco Inferno.

At that time, films like Eddie Griffin’s Undercover Brother were enough to inspire the creation of Dante Alfonse.

As the narrative became more serious in tone, I began looking at real life events and culture to help develop Dante’s character further to make him more believable as an African American living in modern day America.

The story draws influence from many different places. Reggae, Rastafarian culture, the FLCL , biblical text; too much to list honestly. The overarching theme mostly comes from the saying “ignorance is bliss.” The idea that knowledge is power, but it can also be a huge burden.

I would say the movie Wonder and The Blind Side portrayed how being born different is one’s own superpower, which then helped me refine Aboki and his role in my story. Not to mention that there aren’t many African based stories out there in the realm of /comics.

Nova from Marvel and Green Lantern from DC were huge influences on the character, as well as a lack of mixed characters in comics at the time I first started writing the Cometman story around 2011 or so.

Question: Are there any real world situations that have popped up in their stories?

It’s a fantasy world so there isn’t a basis for American Civil War, Jim Crow-era white supremacy to define the World.

That said, Cast’s desire to be a SMITH which is traditionally a male and usually not a female POC is very much akin to our current reality.

As SMITHS are like the fantasy version of ENGINEERS of Silicon Valley, which are notoriously lacking in both people of color and women, I based some of her struggles on what modern day female programmers deal with.

The man-splaining, second-guessing, hostility, and institutional barriers that are MEANT to keep Cast from succeeding (more so than any fantastical villain) are important to the story.

Racism is something I want to explore in the story.  It’s something that not only happens every day for people of color, but unfortunately is getting worse in this country.

It wasn’t apparent when it was published, but the thugs who accost Dante in the first chapter are motivated by racism. It’s something I hope to clarify better in the future because it will matter for Dante’s future later on.

For a variety of reasons, I chose not to write about it initially, but given that Dante is a black lead character and the story focuses on the topic of morality.

I don’t think it can–or should–be ignored, even in a fictional setting.

The arc we are in now is loosely based on gang culture. Kaya’s home island is split between two disputing gangs over fruit. Obviously in real life the subject is a lot heavier and by no means a joking matter, but BOI gives a very light hearted take on it. 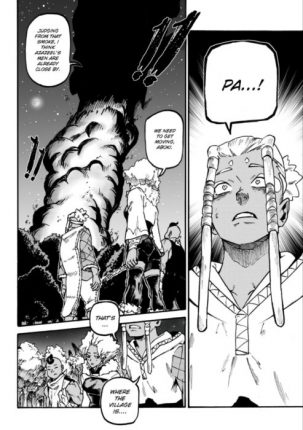 Unfortunately not yet, because the story just started. However, I do plan on exploring the concept of people’s beliefs and perspectives.

For Aboki, he is born with a unique condition that has never been seen in that world and people tend to fear what they often don’t understand.

Many outcast him as a cursed being without any knowledge of his conditions. In the story I plan on tackling such themes of morality and beliefs.

Christine and her family are dealing with the death of Christine’s sister from a few years prior. Dealing with the loss of a loved one is something we all have to deal with in our lives eventually.

Question: What’s coming for these characters?

It’s been tough as it’s OUTRIGHT our second most popular series but it’s been tough to get the aesthetic we want while maintaining our goals of affectionately treating black characters.

It’s a double-edged sword to get perfect -style illustrations while at the same time depicting people of color in a non-stereotypical sort of way.

It’s been a journey but CLOCK STRIKER will return this year in time for & other spinoff material.

Likewise, we’re going to have a unique artist who can support her adventures for the foreseeable future. When it returns, we’ll resolve the DEMON BANDITS arc.

Hopefully Isa tightens up and does what he’s supposed to: Defeat the Babylons and free the world from ignorance.

Never leaving his village, Aboki is about to journey into the world for the first time. He will face many challenges on his path, but he will have to overcome to fulfil his new destiny.

Christine and Comet are in the fight of their lives coming up. This will set them both down different paths to tackle difficult situations in the future, and not just when they are joined together. So look out for that.

A special thanks to all of the creators of Saturday AM and Motivation for cooperating to make this article possible.

We hope this article showed that there are dedicated and talented storytellers who want to share rich stories of different perspectives with you.

As Saturday AM and other indie publishers continue to give us compelling characters from different walks of life, hopefully the mainstream media will follow suit.

Interview With Author Of Orisha Manga (Saturday AM)