Usually an anime series on average will have one or two main characters. It’s easier that way as far as focus.

Sometimes though there’s multiple main characters. As much as 3, 4, or in rare cases 5.

This time around let’s focus on anime groups of 4 from various anime shows in different genres.

Best anime with groups of 4: 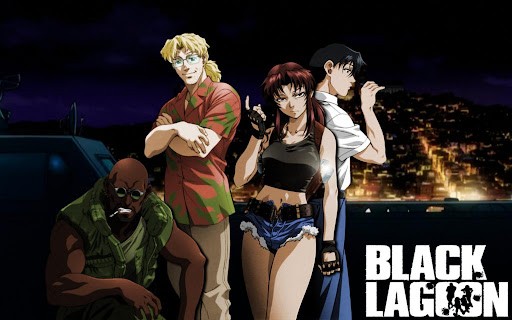 Literally the 4 main characters of this action series.

The plot is about smuggling (weapons, etc). Dutch is the leader of the lagoon company.

The chemistry between these 4 characters is always a good laugh and there’s plenty to get out of it. Entertainment wise.

All 4 characters aren’t always side by side, but giving they work within the same company it’s a lot of the time as they travel around the world. Doing “dirty” business.

It’s made by Madhouse, and there’s plenty of violence. Comparable to something like Monster in a way. 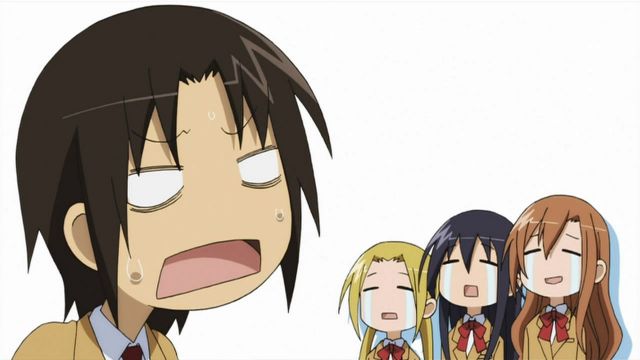 This is the kind of anime you don’t watch when parents or family are in the room. Or when you’re out in public unless you give no f*cks.

The main characters are:

2 of them are on the sane side of things, while the other 2 are snarky, sarcastic, purposely take things out of context, and have a dirty mind.

They’re constantly making lewd jokes and it only gets more extreme with each season it seems.

Underrated series without a doubt. Deserves more appreciation (especially with the character chemistry). 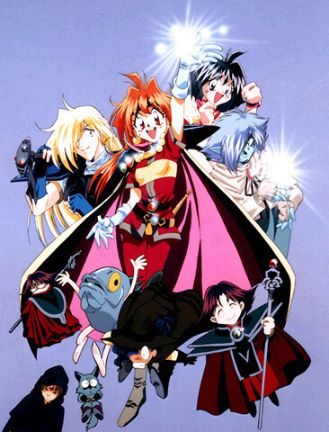 In this /fantasy series you have:

They’re personally one of the best groups of 4 in anime history. And they all bring something different to the table.

Lina is a powerful mage with magic rivalling the universe. She’s stubborn, aggressive in achieving her goals, and confident.

Gourry is the swordsman who sticks with Lina. While the other two are powerful mages with their own set of unique magic.

It’s hard to see chemistry like THIS these days (in groups of 4 in anime). It’s legendary in its own right. 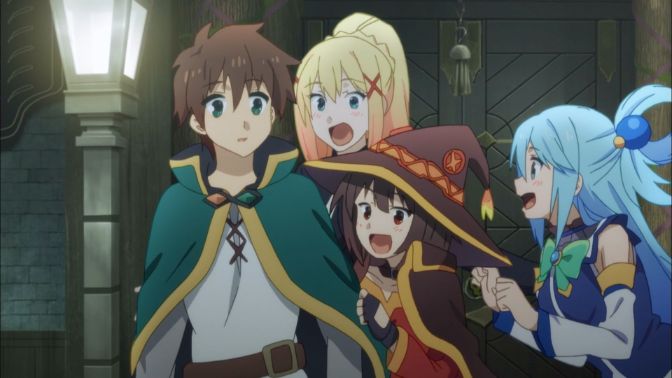 Konosuba, or Kono Subarashii is an anime I wasn’t sure I’d like. The comedy can be extreme, but Its become one of my top comedy series.

The main cast is:

Probably one of the TOP anime characters of all time in groups of 4. They compliment each other so well you won’t forget any of their names or roles.

They’re memorable and reliant on each other in one way or another, especially as far as plot most of the time.

Kazuma in particular is a well written MC and is the pillar of “gender equality” in the anime community. Partly thanks to the anime’s unconventional writing. 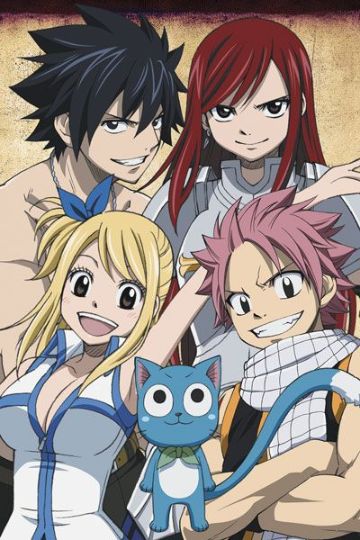 is a big anime series with endless amounts of episodes, and a big cast of anime characters.

The main group of 4 in this anime series:

Just like Konosuba, these 4 characters are one of the most iconic in anime. Most know them, even if they’re not fans.

Even though not all characters in FT are the most relevant, they are memorable besides the main cast. Which is its strong point.

is nowhere near as bad as people try to make it out to be. Ratings speak for themselves. 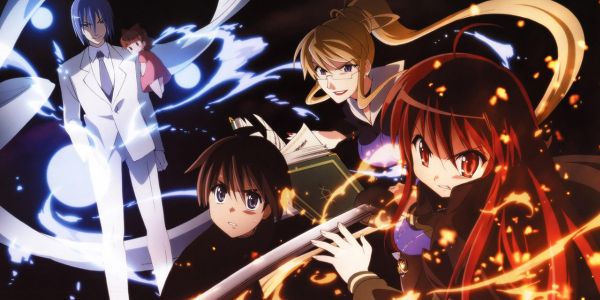 rotates between its characters a lot. So it’s not always something you see when it comes to groups of 4.

That said, the characters are:

Sometimes that changes depending on the season, the arc, and what’s happening. The teamwork between characters in this anime is solid.

The plot is about demons, humans, the flame haze that destroy demons, and their mission to protect the world’s balance. 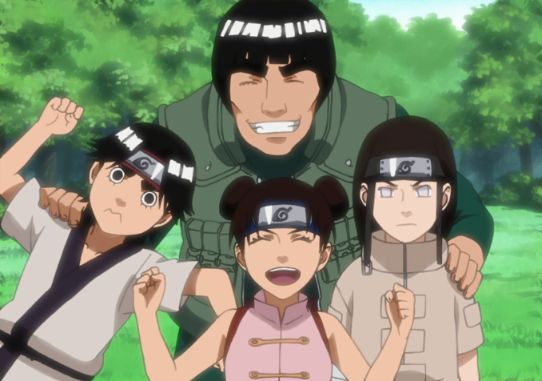 Depending on how you feel, there are different characters you can pick out of Naruto for groups of 4.

For me I’ll go with:

Team Guy has one of the best groups of 4 in anime and in Naruto. They’re an energetic set of characters with different sets of talents that aren’t typical..

You obviously have the main team 7 which is Naruto, Sakura, Sasuke, Kakashi…. But Sakura holds it back in the first season of Naruto.

Either way, worthy characters when all is said and done. 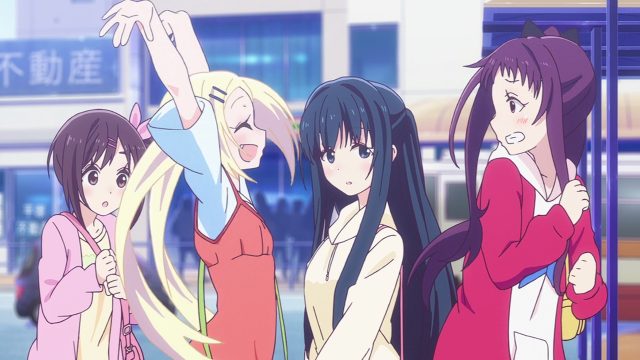 Hanayamata is an anime by Madhouse, believe it or not. It’s unusual for them considering their catalog.

It’s a series in a setting of “cute thing being Yosakoi, a type pf Japanese dance.

You can think of the anime like an alternative to Love Live, There’s no , and it’s completely and appropriate. 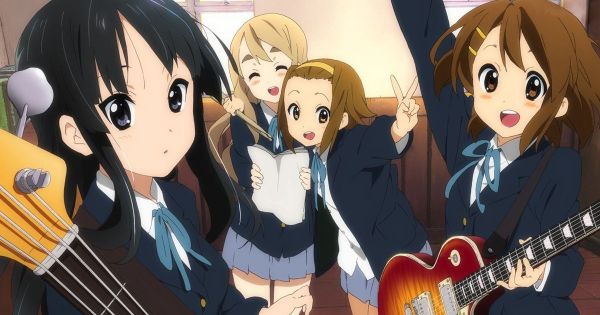 Made by Kyoto Animation, K-On is one of many original anime series that didn’t start from a or .

It’s the anime responsible for the Moe genre, given the anime’s influence and originality at the time it first aired.

The chemistry between these characters is legendary in the /comedy community. Later there are 5 characters, but the 4 start it off.

Drinking tea, eating biscuits and cake, playing together, creating their own band, and enjoying themselves.

Relevant: The Most Famous Anime Dere Types That Changed The Industry 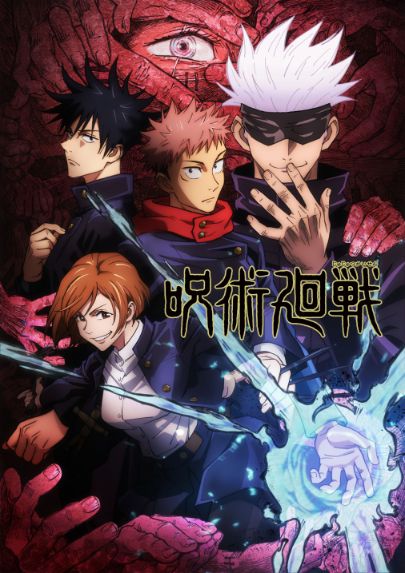 JJK is a solid series for a lot of reasons. One of them is the solid writing of female and male characters.

The other reason is the chemistry between its 4 main characters, and how they interact and work together.

The main cast is:

Megumi’s the introvert, the rest are energetic and a bit much for Megumi at times. But it makes for good comedy.

Easily o e of the best groups of 4 in anime in almost every way imaginable.

11. How To Raise A Boring Girlfriend 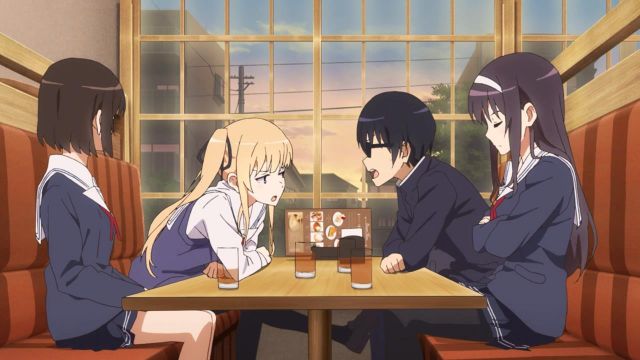 Saekano, or How To Raise A Boring Girlfriend is a Harem/Ecchi series you wouldn’t expect to be so good.

It’s a stand out series in the genre.

Each of the is a mix of authors, writers, Utaha being a best selling author. And Megumi being an average girl with no current creative passion or talents.

She’s the girl the show is built around in a subtle way which slowly reveals itself. 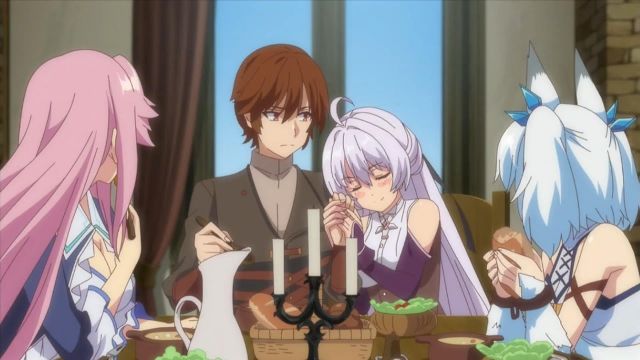 This one is more of a sarcastic joke but the shoe fits anyway.

Aside from the insanity of this series and how one of the characters makes up the party of 4, their relevance to the story is undeniable.

They’re also a set of characters that would make the anime fall apart if any of them disappeared.

It’s a shame the anime didn’t follow along the lines of Goblin Slayer.

It had potential to be more than it was. 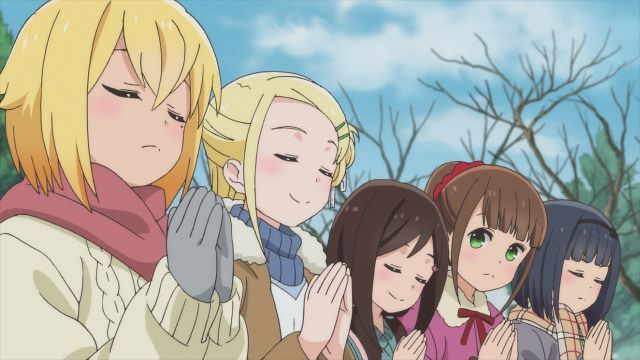 And I’ll add Hitoribocchi last. This is an anime series with surprising life lessons for how , daft, and childish it seems on the surface.

It’s about Hitori, an introvert girl starting with no friends. Her goal is to make as many friends as possible.

You see the world through her eyes as she tries to overcome her insecurities and flaws to become a better, more confident girl.

It’s relatable in this way, for any gender.

Can you name more anime with groups of 4?

13 Of The Coolest Anime Names Of ALL Time

35 Anime Character Outfits That Are Both Cool And Stylish