Baki The Grappler is an series focused on martial arts and action. Produced by Group TAC.

As with these types of , you’re bound to come across meaningful quotes that tell a story. Or that have the power to change your perspective. 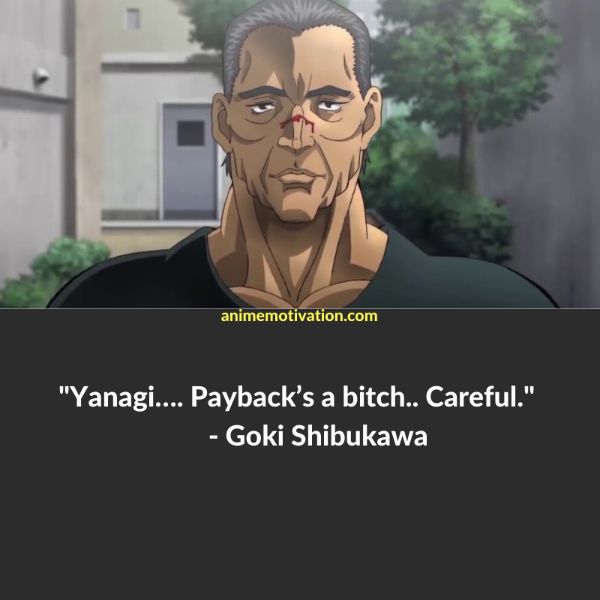 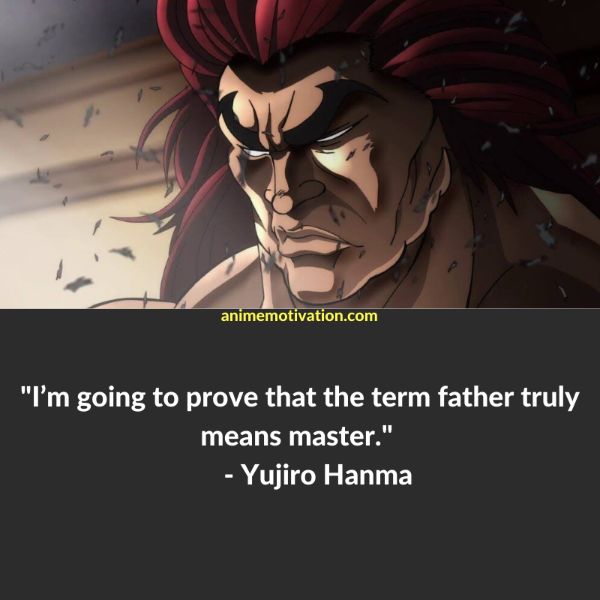 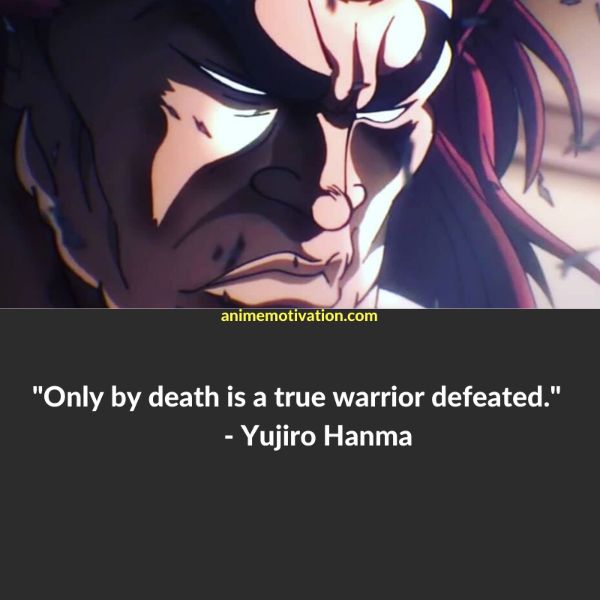 “Only by death is a true warrior defeated.” – Yujiro Hanma 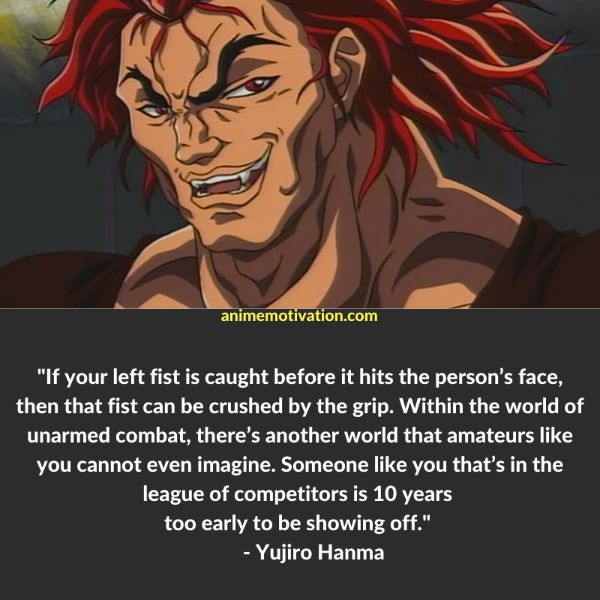 “If your left fist is caught before it hits the person’s face, then that fist can be crushed by the grip. Within the world of unarmed combat, there’s another world that amateurs like you cannot even imagine. Someone like you that’s in the league of competitors is 10 years too early to be showing off.” – Yujiro Hanma 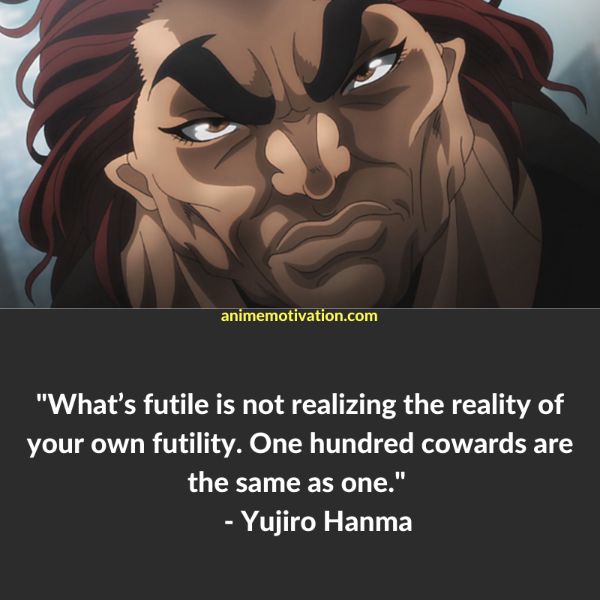 “What’s futile is not realizing the reality of your own futility. One hundred cowards are the same as one.” – Yujiro Hanma 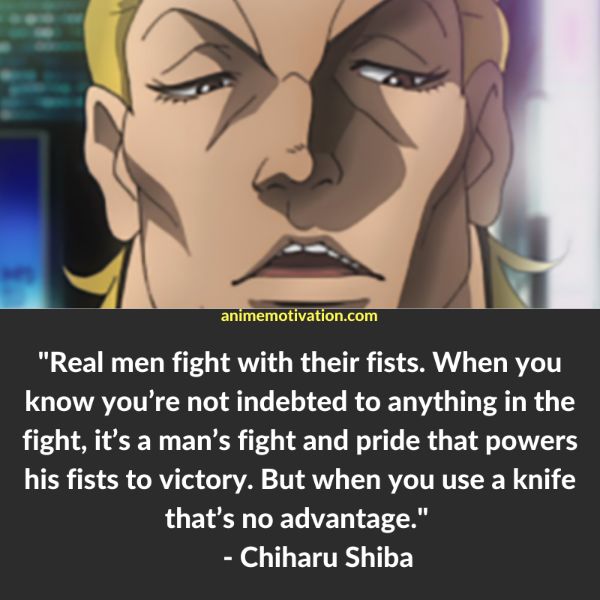 “Real men fight with their fists. When you know you’re not indebted to anything in the fight, it’s a man’s fight and pride that powers his fists to victory. But when you use a knife that’s no advantage.” – Chiharu Shiba 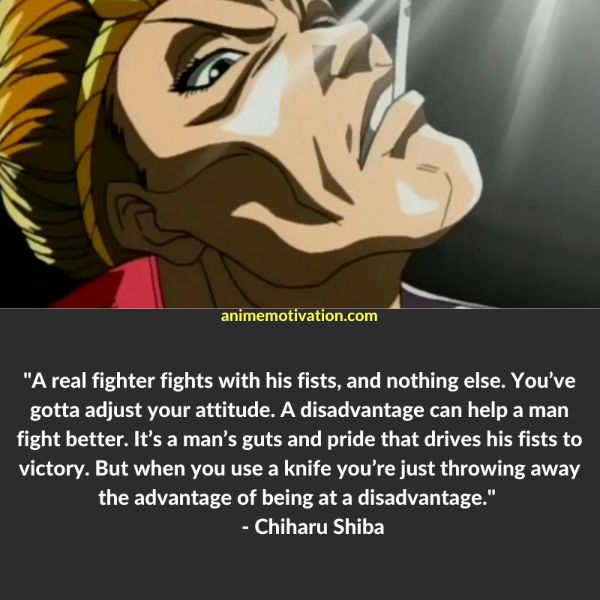 “A real fighter fights with his fists, and nothing else. You’ve gotta adjust your attitude. A disadvantage can help a man fight better. It’s a man’s guts and pride that drives his fists to victory. But when you use a knife you’re just throwing away the advantage of being at a disadvantage.” – Chiharu Shiba 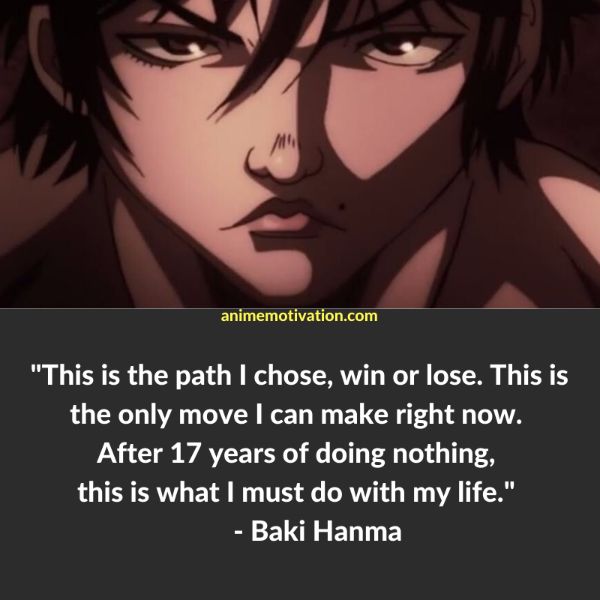 “This is the path I chose, win or lose. This is the only move I can make right now. After 17 years of doing nothing, this is what I must do with my life.” – Baki Hanma 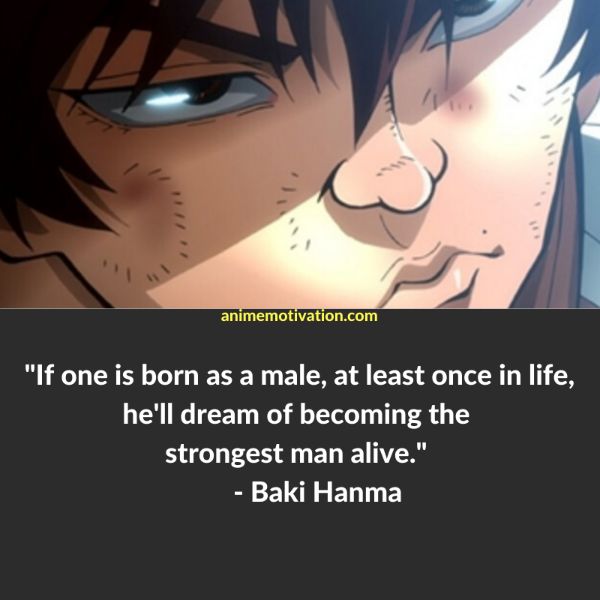 “If one is born as a male, at least once in life, he’ll dream of becoming the strongest man alive.” – Baki Hanma 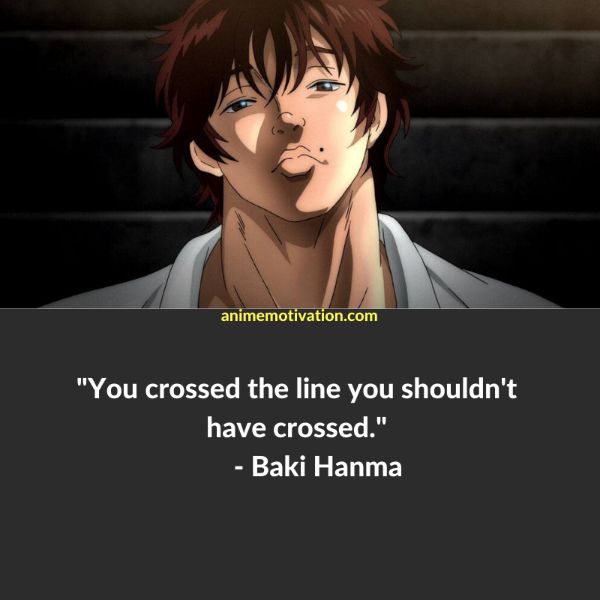 “You crossed the line you shouldn’t have crossed.” – Baki Hanma 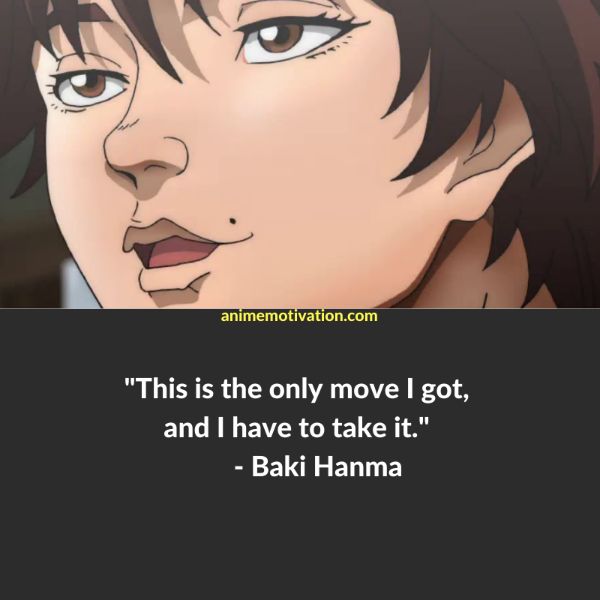 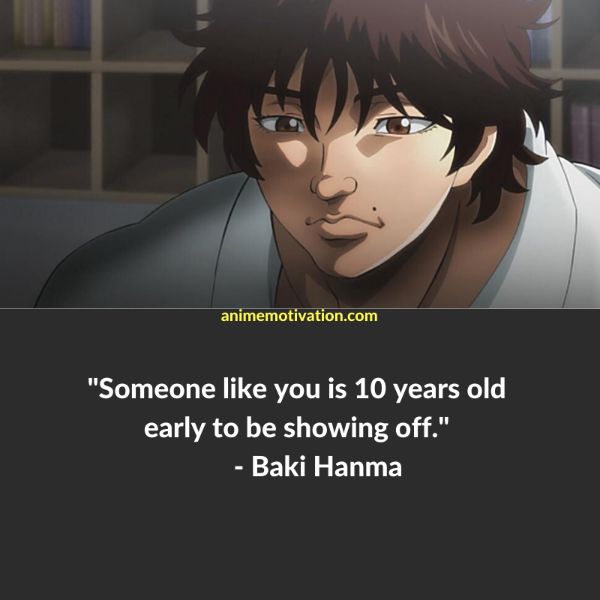 “Someone like you is 10 years old early to be showing off.” – Baki Hanma 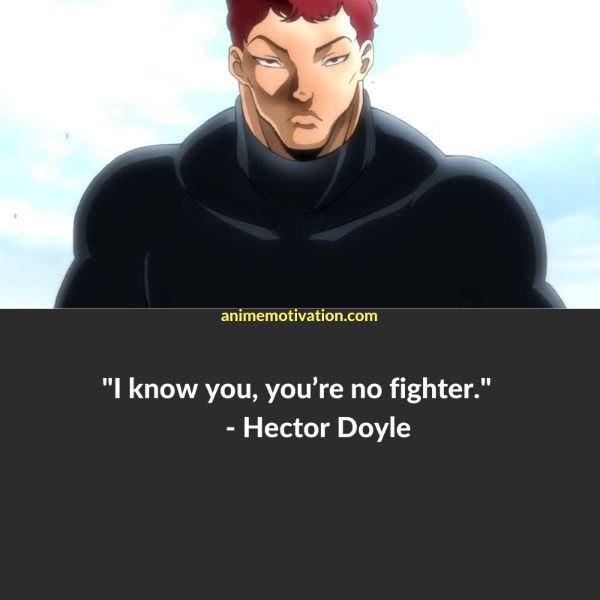 “I know you, you’re no fighter.” – Hector Doyle 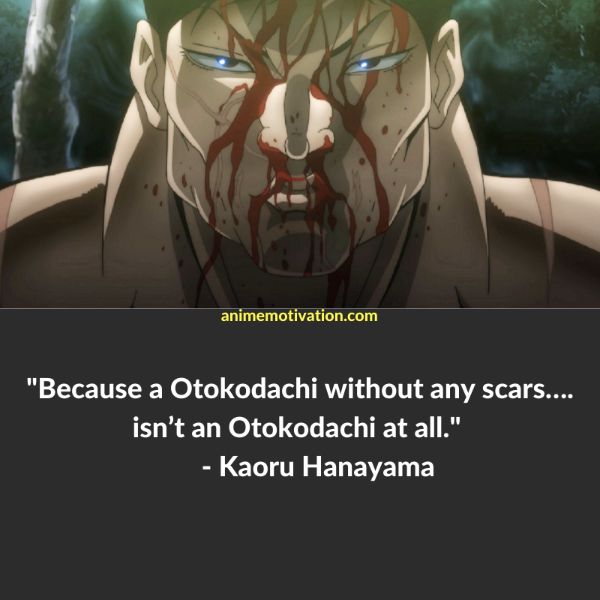 “Because a Otokodachi without any scars…. isn’t an Otokodachi at all.” – Kaoru Hanayama 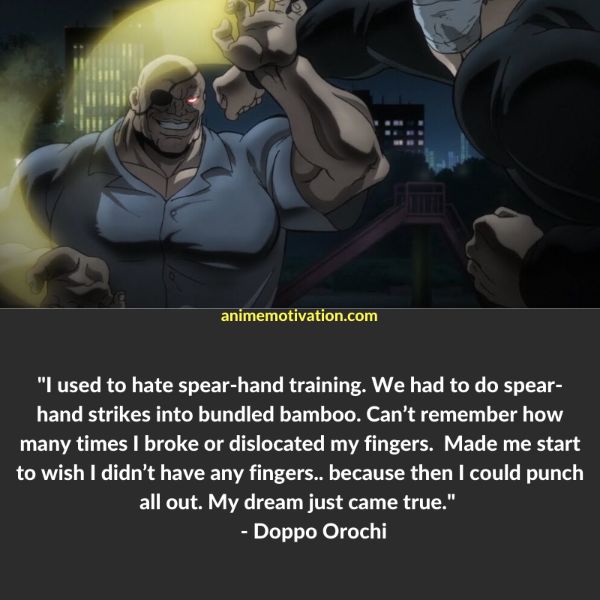 “I used to hate spear-hand training. We had to do spear-hand strikes into bundled bamboo. Can’t remember how many times I broke or dislocated my fingers.  Made me start to wish I didn’t have any fingers.. because then I could punch all out. My dream just came true.” – Doppo Orochi 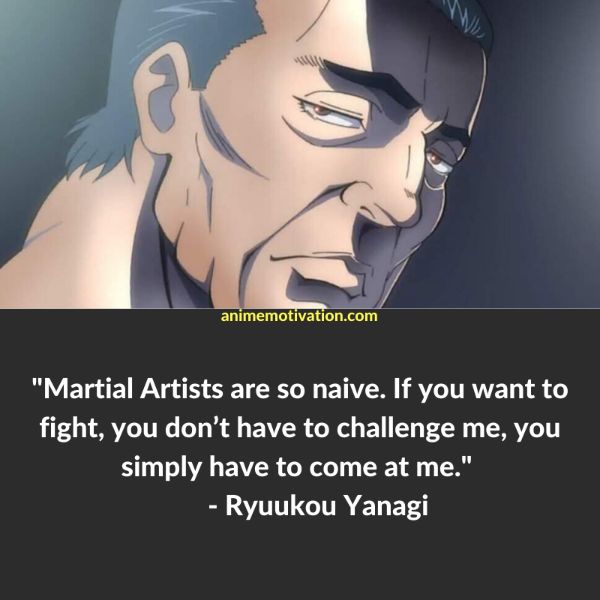 “Martial Artists are so naive. If you want to fight, you don’t have to challenge me, you simply have to come at me.” – Ryuukou Yanagi 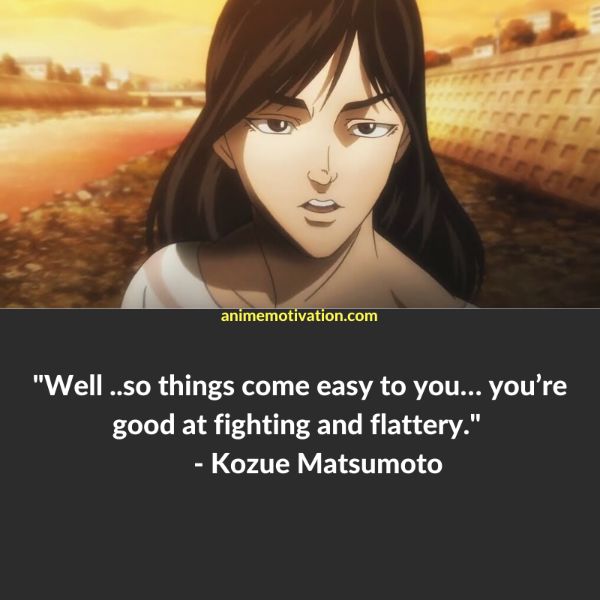 “Well ..so things come easy to you… you’re good at fighting and flattery.” – Kozue Matsumoto 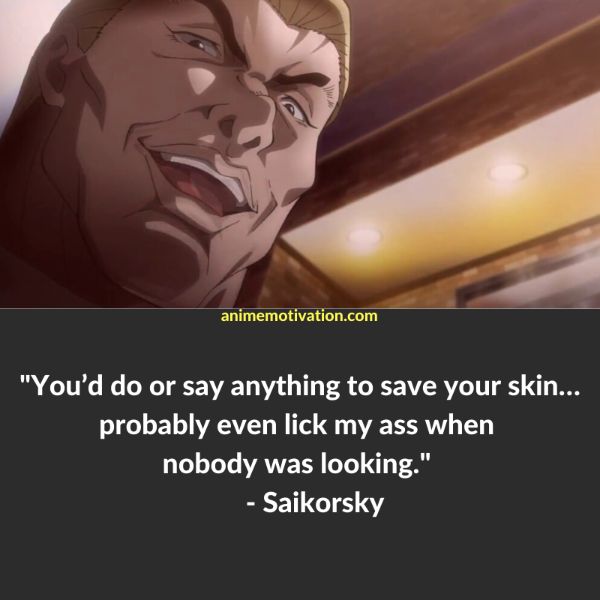 “You’d do or say anything to save your skin… probably even lick my ass when nobody was looking.” – Sikorsky

The Most Legendary Fairy Tail Quotes That Will Touch Your Heart