Asuna Yuuki, the fan favorite among fans. Alongside characters like Sinon Asada.

One moment she’s as tough as steel bars. And is the last person to tolerate nonsense from anybody. Or let others take advantage of her.

And then there’s the vulnerable side to Asuna Yuuki. Who’s pure of heart, kind, selfless, and willing to fight her way to success.

To give you a dose of inspiration, encouragement, and relatable quotes… I’ve gathered the best quotes from the MC of the series. 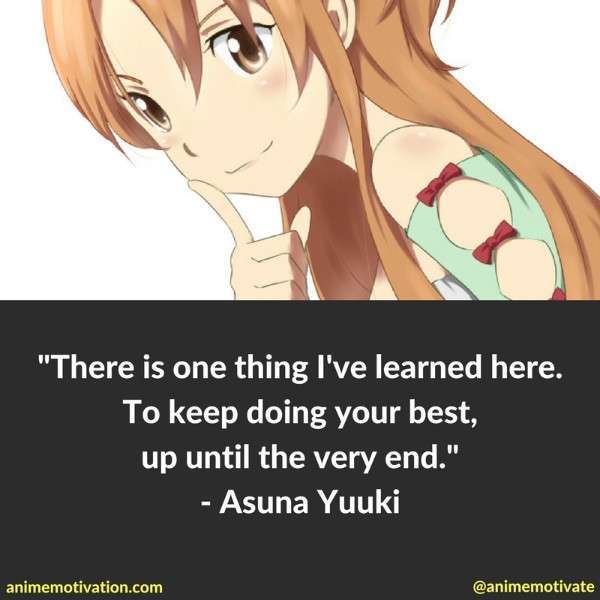 “There is one thing I’ve learned here. To keep doing your best, up until the very end.” – Asuna Yuuki

Sound advice that applies to us all. 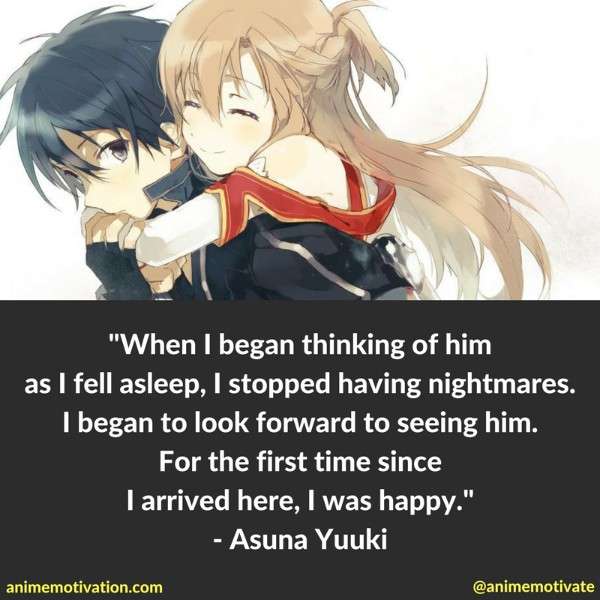 “When I began thinking of him as I fell asleep, I stopped having nightmares. I began to look forward to seeing him. For the first time since I arrived here, I was happy.” – Asuna Yuuki 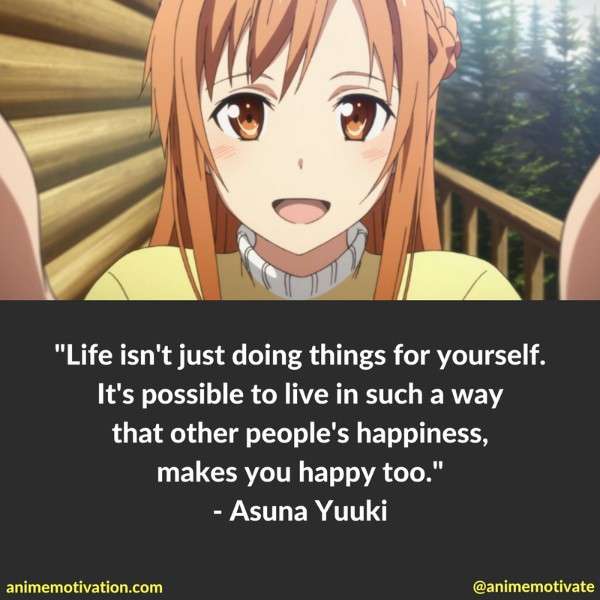 “Life isn’t just doing things for yourself. It’s possible to live in such a way that other people’s happiness, makes you happy too.” – Asuna Yuuki

Love this quote personally, and there is some truth to it. 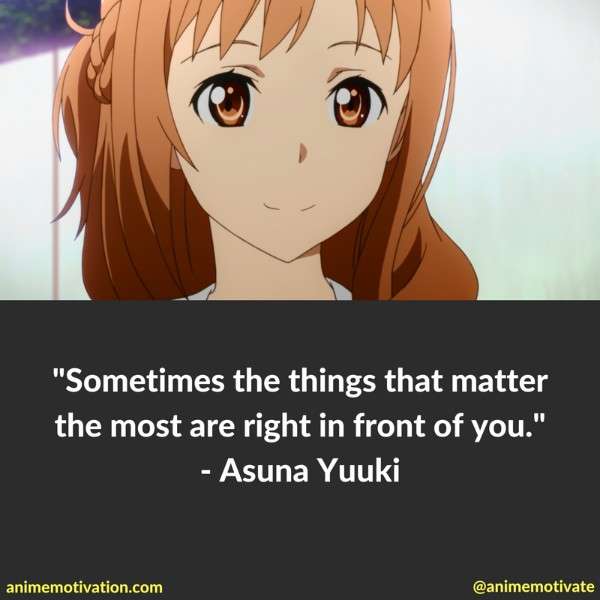 “Sometimes the things that matter the most are right in front of you.” – Asuna Yuuki

Isn’t that the truth? This is especially true with relationships and family. And your goals. 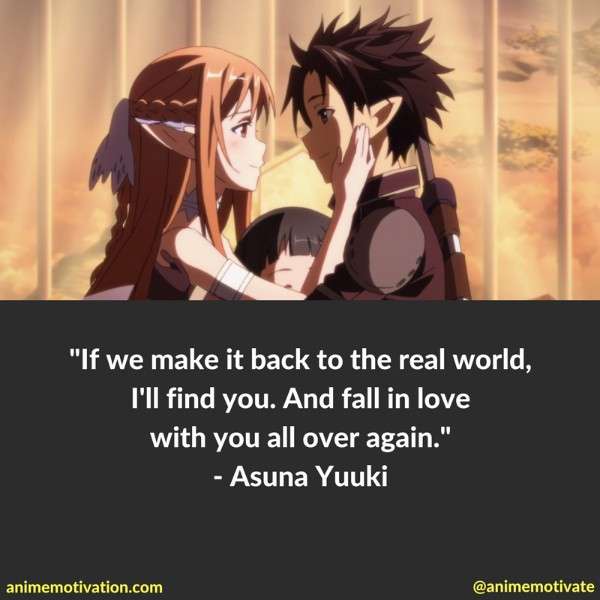 “If we make it back to the real world, I’ll find you. And fall in love with you all over again.” – Asuna Yuuki 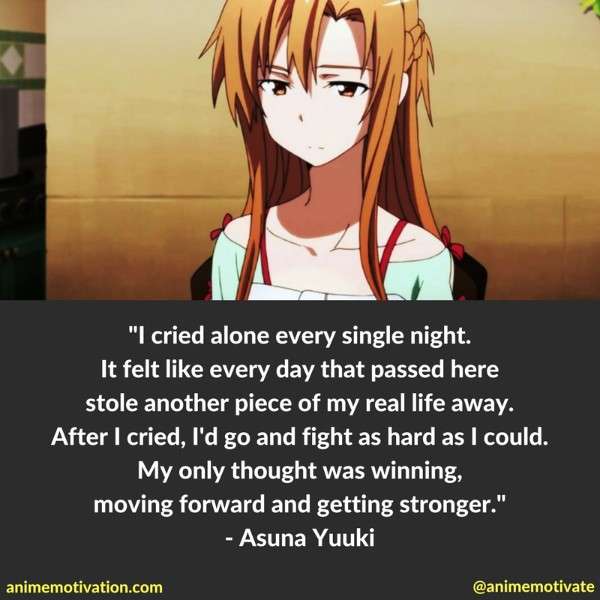 “I cried alone every single night. It felt like every day that passed here stole another piece of my real life away. After I cried, I’d go and fight as hard as I could. My only thought was winning, moving forward and getting stronger.” – Asuna Yuuki 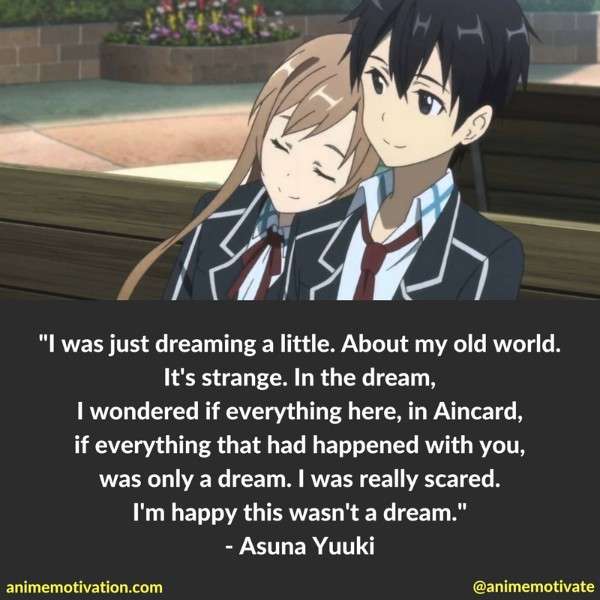 “I was just dreaming a little. About my old world. It’s strange. In the dream, I wondered if everything here, in Aincard, if everything that had happened with you, was only a dream. I was really scared. I’m happy this wasn’t a dream.” – Asuna Yuuki

Which Asuna Yuuki quote is your favorite?

Sword Art Online Collectibles To Add To Your Wishlist

20 Sword Art Online Quotes That Are Worth Sharing