teachers fit into a few categories:

In certain shows like K-On, the teachers play an important role in characters lives. But not too much in like “Saiki K”.

Either way – let’s get into the best teachers for all the qualities they bring to the table.

The BEST Teachers You’ll Ever Meet: 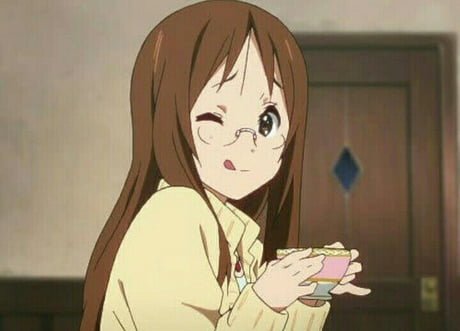 Sawako Yamanaka is the teacher for members of “after school tea time” in K-On. Which includes Yui, Tsumugi, Ritsu, Azusa and Mio.

She’s the funny type of teacher who adds LOTS of humor and stupidity to K-On.

In fact – the comedy wouldn’t be complete without Sawako sprinkling her charm into the story. 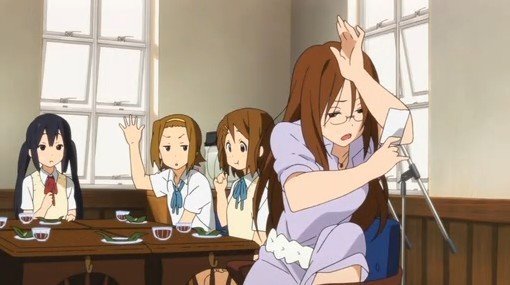 In her “wild” days, Sawako also made and performed on stage. Just like the main characters in K-On. So it’s fitting that she’s their teacher.

Related:  36 Lighthearted K-On Quotes That Will Make Your Day! 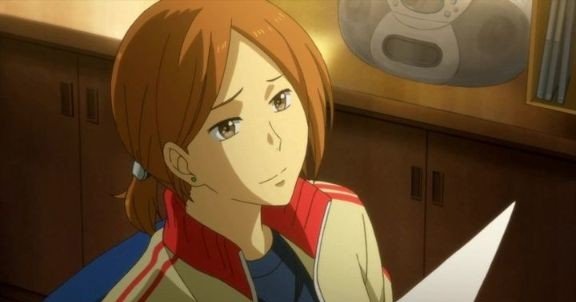 Kokoro is a young teacher (26 years old), leaning more on the energetic side of teachers.

She’s empathetic and you can see she cares DEEPLY about her students. And will do whatever it takes to make sure they’re getting the best education possible. So they can make real progress.

She doesn’t take no B.S either. 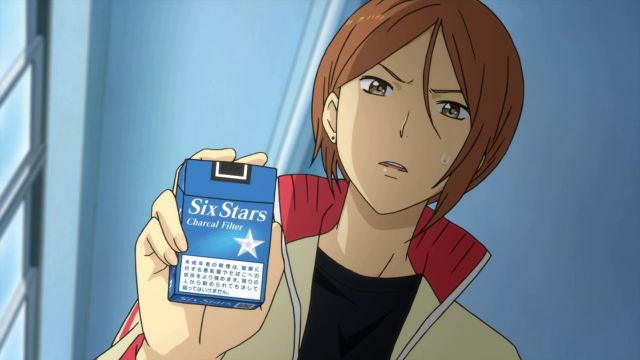 The school system in Re:Life is different for obvious reasons I won’t spoil for you, but Kokoro Amatsu deserves her spot in this list of “best” teachers. 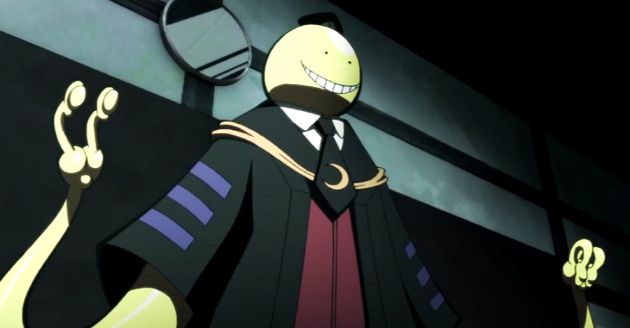 You could argue Koro Sensei is the BEST teacher going in . I mean – he’s not famous for the sake of it.

His style, approach, empathy, character design and unique circumstances is what makes his role so refreshing.

His goal is to train every student until they’re strong enough to kill him. Because if they don’t, the earth will be destroyed. 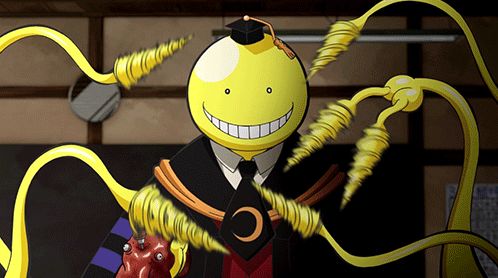 But as far as his role as a teacher, Koro Sensei goes as far as checking up on each student, individually. To bring out their strengths and help them focus on what they’re good at.

Instead of focusing on weaknesses that will never improve (as a regular teacher would do).

There’s so much to learn from this guy and the itself. 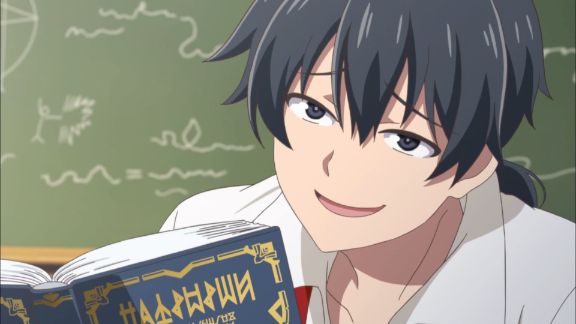 Glenn Radars is another unorthodox teacher. Similar to Koro Sensei for his style of teaching, and how he stands out as a character in general.

Glenn’s laid back, care free and doesn’t get “caught up” in his feelings. So taking criticism from his students is more of a game to him that he makes a joke out of. 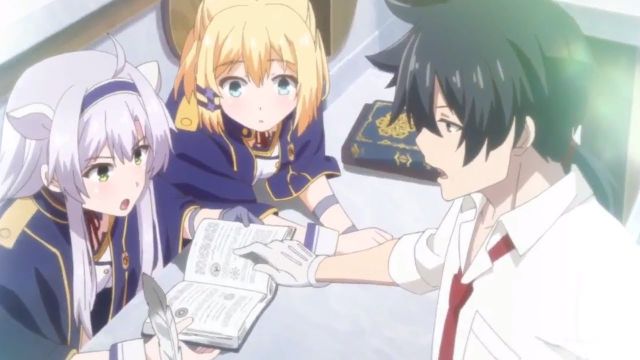 But when he gets serious – he makes you think, ponder, and question your own beliefs about what’s right vs wrong.

Or “how” a problem is supposed to be solved, based on what you’ve been taught about certain subjects or even the world itself.

Personally he’s my favorite teacher in . But that’s just me.

5. Gozaburo Seto (My Bride Is A Mermaid) 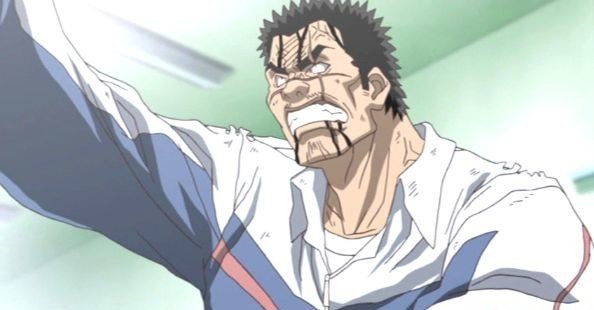 Now – Gozaburo isn’t what I’d call the “best” teacher, literally. But as far as goes, and “comedy” in general, he’s the funniest and most ludicrous teacher I’ve seen so far.

The main reason he even becomes a teacher is to “keep an eye” on his daughter: Sun Seto, who’s engaged to Nagasumi Michishio. 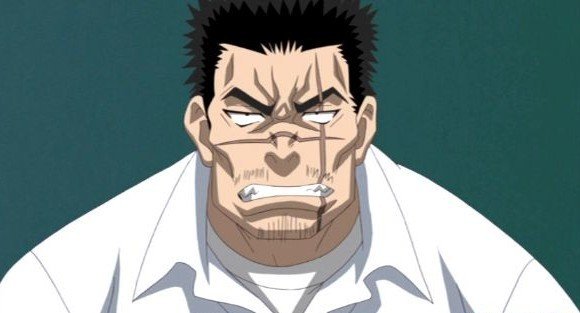 As a father he’s insecure about it. And doesn’t want anything happening to Sun Seto (even though his appearance says otherwise). But once you get into this parody/comedy series, he changes a little and starts to settle into his role as a teacher.

Gozaburo even becomes worthy of the “title” in the end. 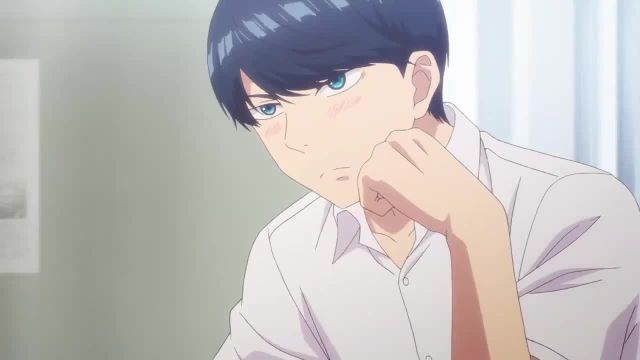 Fuutarou has no choice to become a teacher. His family’s in debt and he wants to do everything in his power to help out.

And so… by a stroke of luck, he gets the opportunity to teacher a group of quintuplets from a rich family (who attend the same school as Fuutarou). 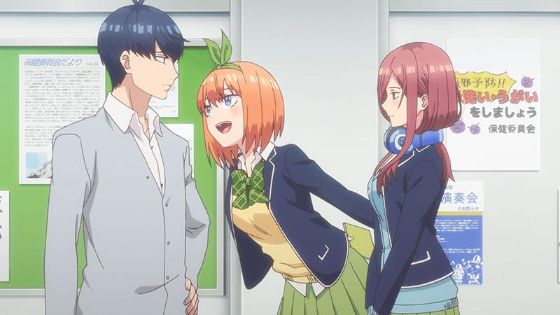 He’s one of the youngest school teachers out of any series you’ll ever see. After all – he’s only 17 in the beginning.

For a guy who loves sticking his head in books and learning as much as possible, it’s only natural why he’s chosen to teach 5 quintuplets and help them graduate with passing grades. 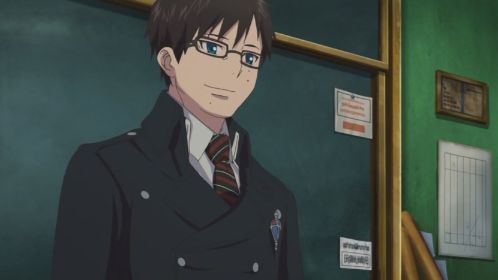 I like Yukio Okumura because he’s a flawed character. And a flawed teacher on top of that.

He’s the younger twin brother of Rin Okumura, a protagonist with a drastically different lifestyle and upbringing to Yukio.

As a teacher, and the youngest person to ever pass the exorcist exam, Yukio’s calm, and a good listener. But his patience only goes so far (especially with his brother Rin). 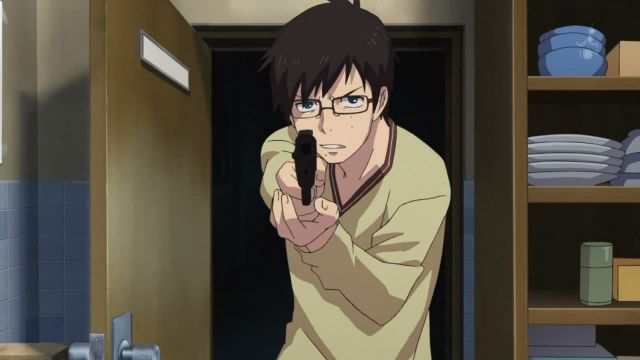 But sometimes Yukio lets his “insecurities” stand in the way of what matters. But that’s what makes Yukio an interesting character (and teacher) in the Blue Exorcist series. 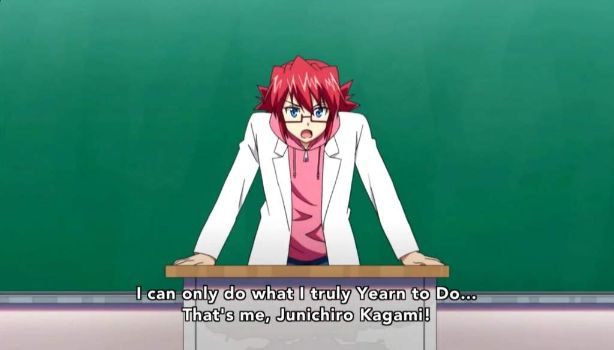 Junichirou is an eccentric teacher. He’s an Otaku, and loves collecting . Not to mention he runs a popular online blog from home. Or wherever he’s able to connect to the internet.

That’s what makes Junichirou Kagami another breed of “teacher” to begin with. With only a few similarities in his styles of teaching. 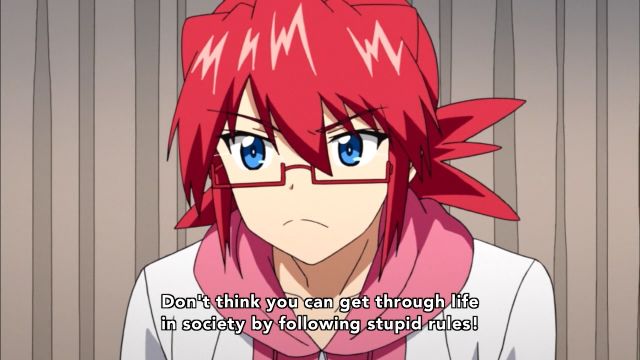 Like how he uses his knowledge and wisdom of gaming, and comes up with metaphors and examples to “break” things down. So anyone can understand it.

Or his motivational style of giving his students courage to pursue their dreams and personal growth.

Alongside Glenn Radars and other teachers, it’s hard to dislike this guy. And there’s so much to learn from his character.

Relevant: The Surprising Differences Between – An Anime Enthusiast, Otaku And A Weeb 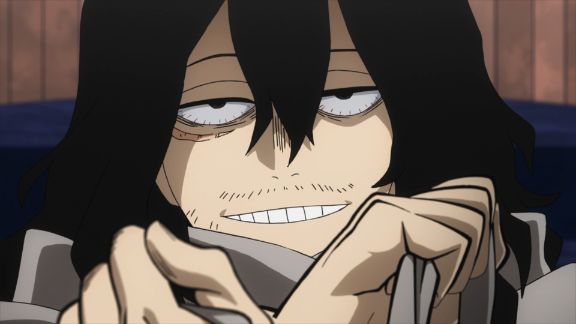 Shota doesn’t mess around. He’s not the kind of guy you want to F with. That’s just the kind of vibe he has, and most students are wise not to “test” him because they know the consequences.

For a serious guy who looks like he hasn’t slept in days, Shota Aizawa cares a LOT for all of his students in MHA.

But his serious style and nature guarantees everyone takes their work seriously. 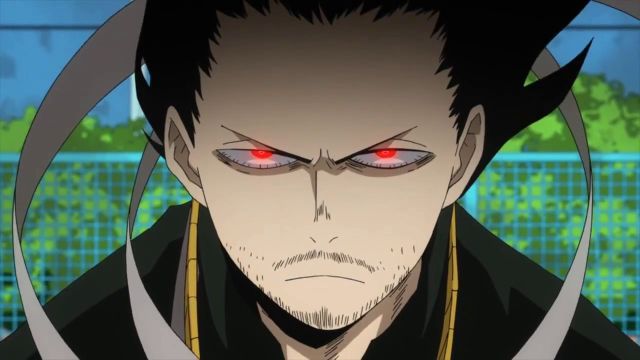 And for anyone who’s struggling, he goes out of his way to demonstrate or “help” to get everyone up to speed and on the same page.

Ad let’s not forget how this guy is as a hero. His presence is enough to scare most villains away, because he’s that kind of guy. 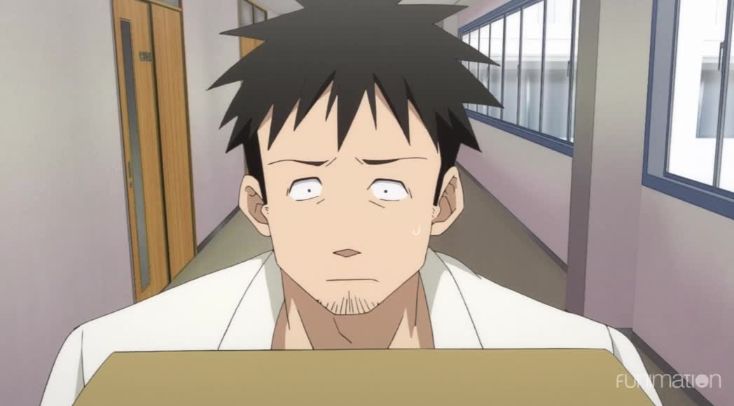 Tetsuo Takahashi is a more laid back type of character. He’s easy to talk to and get along with.

As a biology teacher, his main interest is in studying demi humans. The main theme of “Interviews With Monster Girls”. 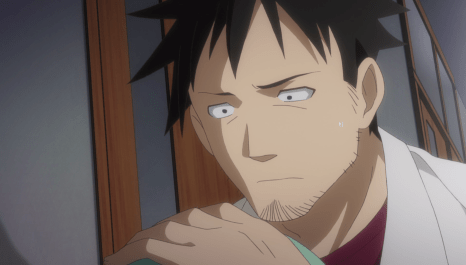 He takes an “empathetic” approach to helping his students. And because he’s so nice and easy going, one of his students develops a “crush” for him (but that’s another story).

Takahashi keeps it professional, no matter how awkward the situation or uncomfortable. So while it looks like he’s “got it together” through the eyes of other people, he’s in fact freaking out but is able to manage it well. 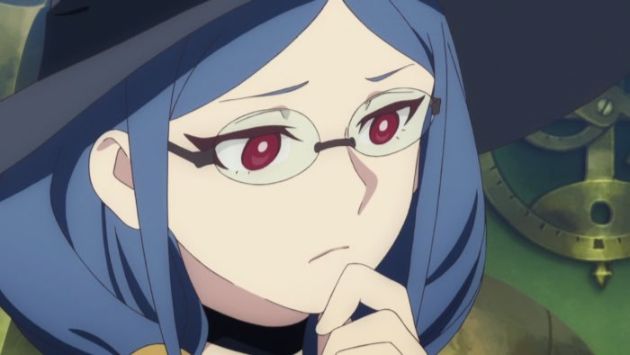 Ursula Callistis’’s calm nature, personality and approach is enough to make e anyone trust her. Even within the first day of getting to meet her.

She has a warm personality and an even warmer smile that puts you at ease. That’s why all of her students trust and love her (especially Atsuko Kagari). 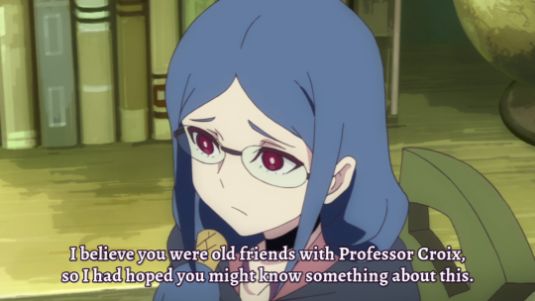 But there’s a side to her character you discover later on, when more secrets are revealed. And even though she’s “perfect” on the outside, Ursula has insecurities hidden from plain sight that she’s still dealing with. 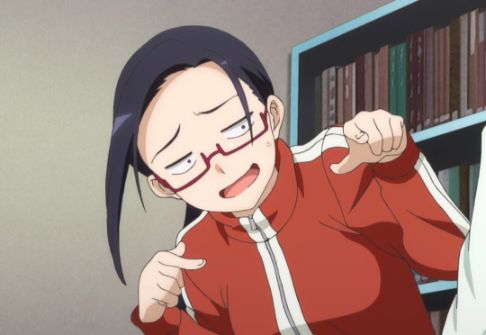 Another teacher worth mentioning from Interviews With Monster Girls. Unlike Takahashi, Sakie Satou is a demi-human. And any slight touch causes “guys” to get aroused because she’s a “succubus”. 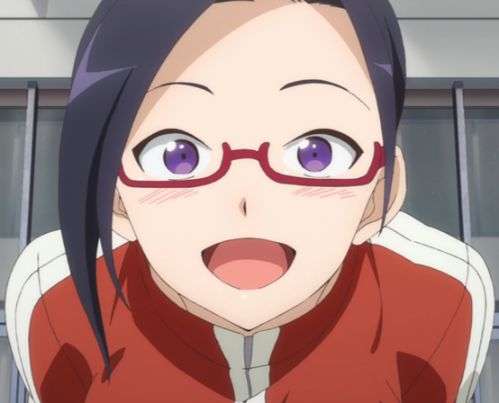 Even though  life as a teacher is more awkward than most teachers, Satou is still hard working, committed and one of the kindest characters who cares for her students.

And she’ll do anything to make things work (even if it’s stressful).

11 Of The Most Miserable Anime Characters

Stumbled upon this while searching for animes just like GTO but what the hell… Onizuka is so underated :v

I haven’t watched it yet, so that’s my reason for not including it.

no Heine from Royal Tutor???? Or any of the senseis from Naruto?

I can’t believe GTO is not here? Suggest watching if you have never seen it before.

Excuse me? And Meisuke Nueno?

I wonder why Eikichii Onizuka isn’t in this list.

He’s an ‘Honorable Mention’ despite being the BEST anime teacher.