The Promised Neverland feels like Darling In The Franxx all over again.

And the hype seems justified.

So even though it’s still “early” days for the series, here are some similar recommendations when you’re finished with it. 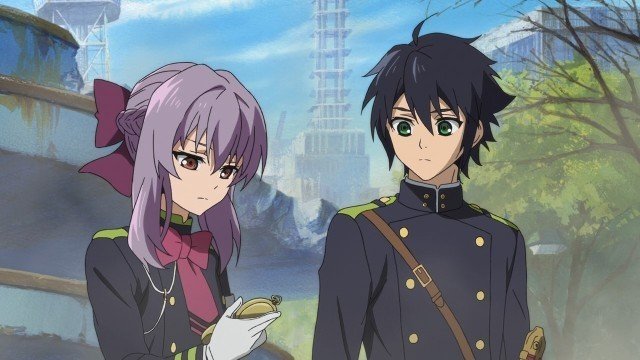 Owari No Seraph is all about demons, vampires and a world of humans doing their best to fight back.

In that sense it’s a lot like Attack On Titan (same studio). But some concepts in Owari No Seraph are almost identical to The Promised Neverland.

Let’s take the example of Emma and Yuichiro Hyakuya.

Main characters from each series. 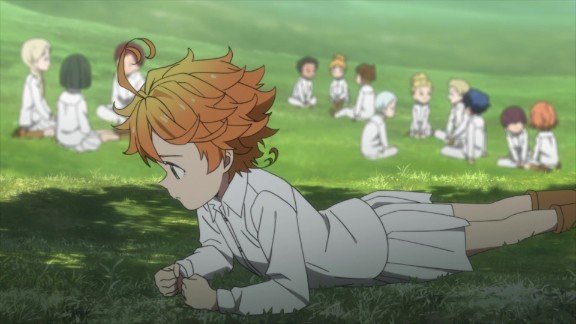 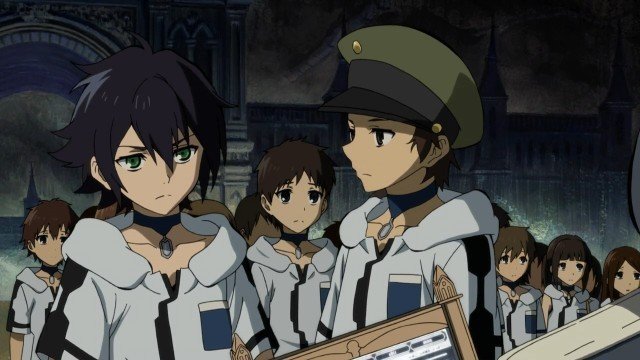 So even though both series take a different approach in story, there are strong similarities that tie them together.

Relevant: The Greatest Anime Shows Like Owari No Seraph 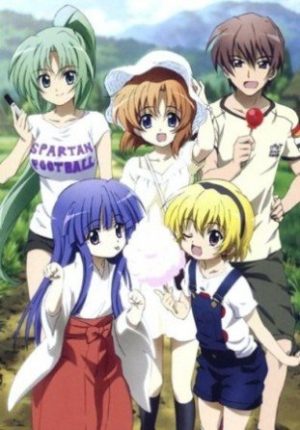 Just like The Promised Neverland, Higurashi is a classic horror series. Jam-packed with mysterious elements to draw you in.

Higurashi is all about the village of Hinamizawa, the curse of Oyashiro (village god) and the dangers tied to “trying to escape” from Hinamizawa.

So no different to The Promised Neverland, the main characters are forced to abide by the rules. Even though there’s an even darker reason about why that’s the case.

This is a good transition if you want an series that plays on the psychology of its characters, keeps you guessing, and is full of insane levels of violence. 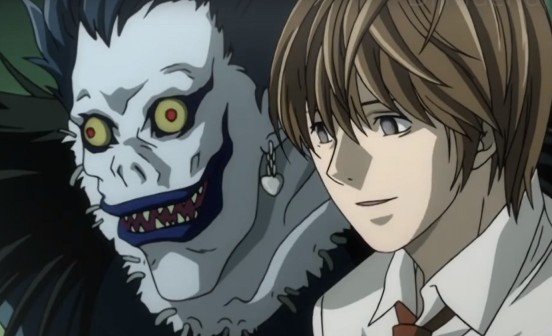 is an all about strategy, tactics, immorality and a Shinigami in the center of it.

Aside from the obvious facts like leaning more to the side of “curses”, the strategy element plays well with The Promised Neverland.

After all – the and series takes this route in order for the orphans to survive, to see another day.

Produced by Lerche, the main characters are survivors of a zombie apocalypse that breaks out.

The problem is – they’re trapped inside their school and there’s only a handful of survivors left. The outside world is crawling with zombies at every corner.

What makes this similar to The Promised Neverland is the psychological aspects of it.

One character experiences PTSD (mental illness) and even delusions to help cope with the stress.

So it gets deeper than the animation style wants you to believe. 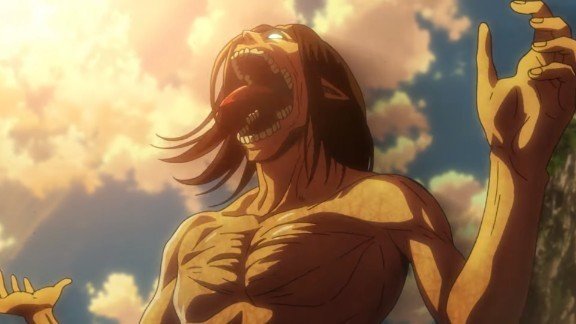 Produced by WIT Studios, Attack On Titan is too famous for anyone to ignore in the industry.

Similar to Owari No Seraph and The Promised Neverland, AOT starts out simple and chilled. Each with one character who “speaks out” and wants more for the orphans and people they’re surrounded by.

But by the end of the first episode, the takes a U-turn and crushes all your hopes of ever seeing a happy ending for 1 character or another.

Aside from the fact that Attack On Titan is geared towards weird-looking human creatures who eat humans, the horror elements are the same.

The plot is just a little different. 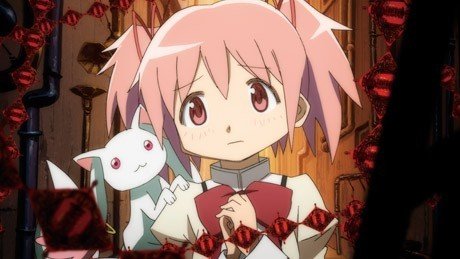 The first time I watched The Promised Neverland, I had 1 thought running through my mind…. this is giving off “ vibes.”

It’s nothing but a cliché (a good cliché) used to draw you in. You set things up in such a way that the outcome is guaranteed to happen, even though it doesn’t seem like it will.

The characters, happy faces, smiles and innocence is destroyed once both series start to get REAL. Showing you the dark side of what each is trying to portray. 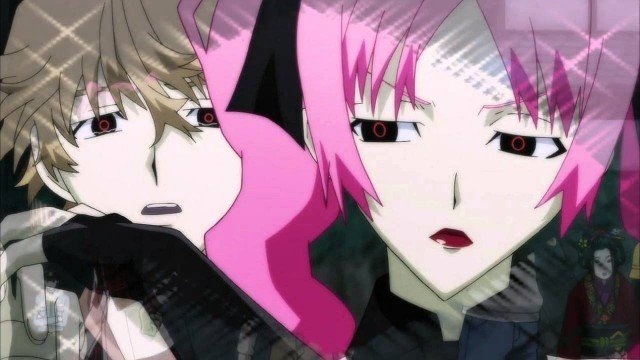 Similar to Higurashi, Shiki is all about a village that’s cursed with a type of creature called “Shiki”.

No one knows why or how, but they start showing up in massive numbers, making the locals weary and agitated of their behavior.

Shiki takes a long time to get “serious” and drop the bomb, the opposite of an like The Promised Neverland.

But once it happens, you won’t be able to turn away or abandon the series. You’re too deep into the characters and story by that point. 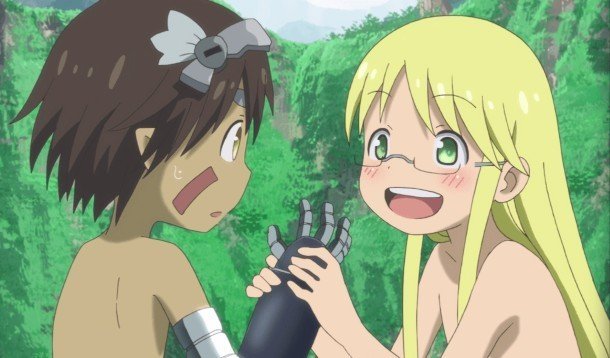 Made In Abyss is more closer to home for fans of The Promised Neverland.

The first episode’s reveal isn’t too shocking or crazy in comparison. But what both do well is take you through each episode, revealing “just enough” to make you curious for more.

Plus the main cast of this centers around kids.

The more progress you make with Made In Abyss, the uglier and more brutal it starts to become for its characters.

9. Kabaneri Of The Iron Fortress 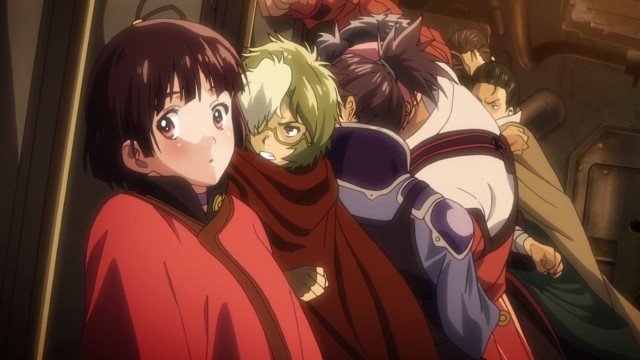 Kabaneri Of The Iron Fortress shares a lot of similarities with:

Like all 3 shows, the first episode makes a big deal out of “what” to expect if you choose to keep watching.

The worst happens to Ikoma’s hometown (the main character) and everyone’s forced to leave by train. Not long after it’s infested with “Kabane”, a creature similar to a zombie.

You won’t find as many similarities here compared to other on this list, but the theme is familiar enough to enjoy it.

Alternative Shows To The Promised Neverland:

11 Of The Greatest Anime Shows Like Angels Of Death

ANOTHER
very good anime and the promised neverland gave me “another” vibes!

someone finally noticed Made in Abyss! ☀

Anime Made in Abyss is not included?

Kimetsu No Yaiba is kind of alike 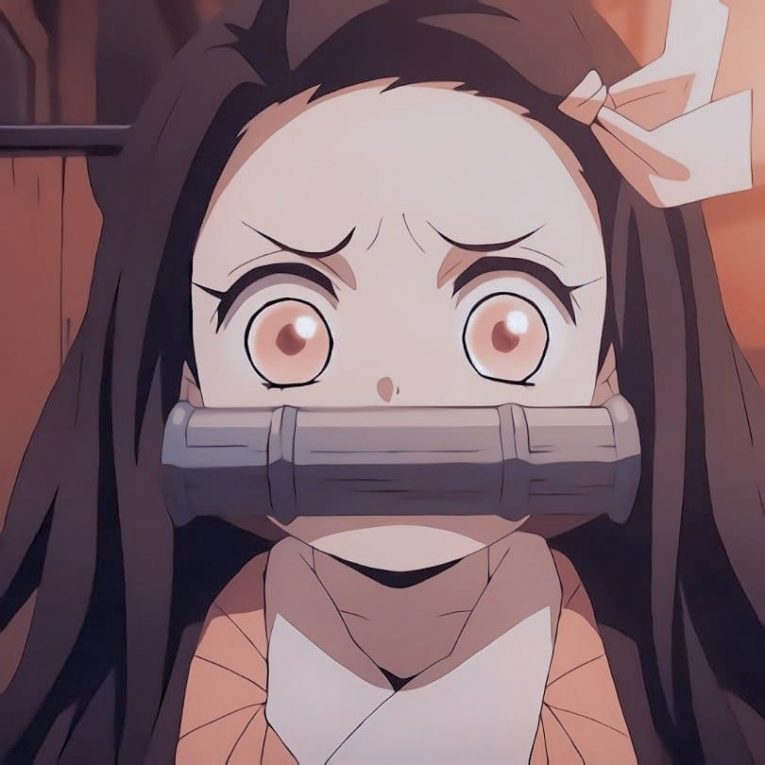 Shinsekai Yori keeps getting overlooked but it is hand’s down one of my favorite anime.